In 2009, when Zimbabwe’s rate of inflation was estimated at 516 quintillion percent and prices were doubling every day, it made me think about meat. Not meat as in livestock or pork belly futures but meat as in meat paste and meat stacks: the currency of the Kingdom of Loathing.

Where other games have gold, credits, or gil, Kingdom of Loathing, a jokey, browser-based MMOG, has meat, and on August 8th, 2004, players discovered an error in the game’s code that granted anyone virtually unlimited funds. The error revolved around an innocuous item called a meat vortex that was designed to steal a bit of extra money from the game’s monsters. However, in certain circumstances, players could use one to conjure over 18 quintillion (that’s 18 billion billion) meat from thin air. As word of the code exploit spread, players rushed out to buy big ticket items they could now easily afford, so player-run stores raised prices on everything to keep expensive items from selling for what was now chump change. Common things that sold for just a few thousand meat, like bat haggis, saw their prices soar into the billions. Players rushed to buy things before they couldn’t afford anything at all. Within hours the game’s economy was an utter shambles.

Like Zimbabwe, the Kingdom of Loathing had fallen victim to what’s known as hyperinflation. This happens whenever the amount of currency circulating through a market increases dramatically. Because there’s so much more money in everyone’s pockets, each piece of money, be it a stack of meat or a Zimbabwean dollar, is worth less than it was before. Shopkeepers raise their prices to keep up, and buyers rush out to spend their money before it becomes even less valuable. This is not to say that the situations in Zimbabwe and in the Kingdom of Loathing are in any way equivalent. The situation in Zimbabwe is a human tragedy brought on by horrendous monetary policy that has had real consequences for real people, while the economic collapse of the Kingdom of Loathing was a software glitch in an entertainment product. However, both of these events followed the same economic processes, and I’ll be honest that I have a better understanding of hyperinflation and its effects from having experienced them in Kingdom of Loathing than from reading about them in Zimbabwe.

Economics is a science that’s often shrouded in jargon and politics. And while we might learn about something better by experiencing it than by reading about it, economics often feels like something so complex and beyond the scope of our daily lives that any experience we do have with it is more likely to be as victims or bystanders than as participants. Videogames offer players an opportunity to experience markets in a way that isn’t possible for most of us in our day-to-day lives.

Learning about basic economics from games isn’t really anything new. If you were in elementary school in the ’80s, there’s a good chance you played Lemonade Stand on one of those ubiquitous Apple IIs. And while they were once the exclusive domain of RPGs and strategy games, practically every new game these days has some sort of market-like system for buying upgrades and selling unwanted items. Sometimes it’s as basic as Super Mario Galaxy 2 asking players to trade in collectible star bits for extra lives and new levels, and other times it’s as complex as the resource shortages and surpluses of the Fable games that encourage you to buy low and sell high for a profit. 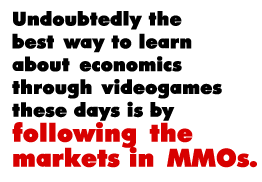 But undoubtedly the best way to learn about economics through videogames these days is by following the markets in MMOs. While single-player games offer structured simulations of markets, MMO markets reflect the needs, trends, and irrational impulses of real people. The people trading in these markets are working to make a profit on the real-life time and energy they’ve put into the game. They have a stake in things.

The heart of one such market is the Auction House in World of Warcraft, where players go to buy and sell any of the game’s thousands of items. There you can find not only items that are immediately usable, like weapons and armor, but also items that don’t have much utility on their own and instead serve as materials for creating other things. Crafting raw materials into usable items requires players to have special skills; likewise, gathering those raw materials requires its own set of special skills. That intersection of gatherers and creators in a place where they can determine their own prices creates a free market and a powerful, hands-on demonstration of the principle of supply and demand.

The concept of supply and demand is undoubtedly economics’ most well-known contribution to society and is a cornerstone of the field of microeconomics. It’s a term that a lot of people will recognize, but not everyone will be able to sketch out what it really means. Talk to most people, and they’ll tell you that if there’s a demand for something, someone will supply it, like bad reality TV or low-brow summer comedies. Talk to anyone who has spent much time around the Auction House, however, and they’ll have an intuitive grasp of the idea.

At its heart, supply and demand is about finding the intersection, or equilibrium, of how much it costs for a seller to provide a product and how much of that product customers are willing to buy at a given price. Consider “souldarite,” one of the minerals in World of Warcraft. It can only be extracted by characters with the mining ability from just one area in the world. It is used by characters with the blacksmithing ability to make certain types of armor. That armor can in turn be sold to other players in the Auction House. The miners extracting the souldarite have to determine how much it will cost them to get different quantities of the mineral against how much the blacksmiths are willing to pay for it. Is the souldarite in an area that’s dangerous for that character? Do they then need to spend more on healing supplies? What about on inventory space to carry more souldarite pieces? The blacksmiths, meanwhile, decide how much they can pay for souldarite based on how much profit they can expect to get from selling the armor they make with it to other players. The cost that the miners are willing to incur and the price that the blacksmiths are willing to pay determine just how much a piece of souldarite is sold for.

This process of weighing production costs against what consumers are willing to pay is the same process that companies like Sony use in determining what to charge for things like PlayStations and plasma TVs. And World of Warcraft players willingly do it every day with the sort of dedication that economics instructors can only dream of their students having.

There are limits to what you can learn from game markets. You won’t learn much about trade deficits, for example, and if you’re looking for insight into the mortgage-backed securities that brought the world economy to its knees in 2008, you’ll have about as much luck as Lehman Brothers has money. You’ll learn some about inflation and deflation but little about the programs governments use to prevent them or dampen their effects. Stocks? No. Bonds? No. Perhaps most noticeably, videogames in general lack any concept of savings or credit, two aspects of economics that everyone in modern society could stand to know more about.

Games could simulate all of that, to one degree or another, and titles like Capitalism certainly try, but the fascinating thing about markets is the way they grow and move in unexpected ways that can be both tragic and serendipitous. Videogame markets are no different.

When Diablo II was released, players swarmed online looking to swap the items they found while adventuring. Direct barter was common, but players who wanted to buy things directly ran into a problem: The game’s currency, gold, was so common that no one really wanted it, and even if they did, carrying around a valuable amount of it was a real hassle. Players needed something that was smaller and rarer. To complicate things, most of the game’s items were randomly generated, so they also needed to find something valuable that would appear the same way in everyone’s game. Gradually, the community settled on one of the game’s rings, the Stone of Jordan; it was rare, it was small, and everyone agreed that it was valuable. Item prices were listed in Stones of Jordan, and it became the de facto medium of exchange. Without any help from the game’s developers, the Diablo II community spontaneously invented money.

That’s an experiential lesson in one of the fundamentals of economics that would be hard to get out in the real world, and everyone involved has videogames to thank.

Adam Greenbrier has considered the opportunity cost of playing videogames but keeps deciding to play them anyway. You can find more of his thoughts online at The Clockwork House.