The Gundam franchise is huge, and with the arrival of a brand new show and a line of their cutest models debuting last month, it looks like there’s no slowing down these giant robots. Now that the brand new Gundam hit, Iron-Blooded Orphans, is finally airing, we’re going to sit down with the real star of the new series, the Gundam Barbatos, and see what’s going on in the world of Gundam models. 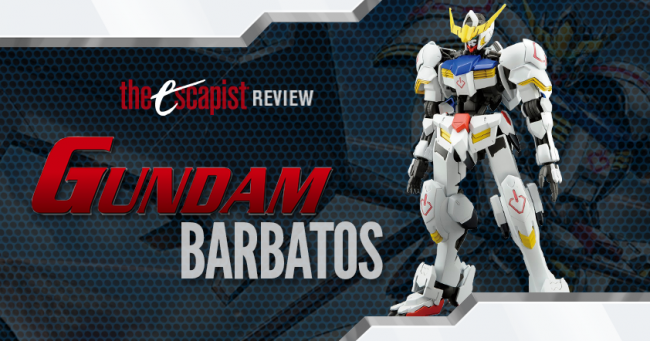 Iron-Blooded Orphans centers around a group of child and teen mercenaries charged with escorting a famous revolutionary from Mars to Earth. After staging a coup and ousting their former commanders, one of the young soldiers, Orga, continues to escort the high-profile client with the help of his right-hand man Mikazuki. In order to ensure the client’s safety and help Orga establish a new regime, Mika rises to the occasion and pilots the Gundam Barbatos, an old but powerful mobile suit from the Calamity War some 300 years prior.

This Barbatos is part of the 1/144 High Grade line of Gundam models, which measure in at between five and six inches in height. Despite its small size in comparison with other Gundam models, this kit has an excellent attention to detail. Each panel and line from the anime is translated straight onto the model, even to pieces that are covered by the suit’s armor.

Aesthetically, this model looks impressive and well-designed. The proportion of armor to inner frame is relatively equal, giving the giant robot a more skeletal look. With the highly stylized head and armor options, Barbatos stands out against decades of Gundam models.

Building Gundam Barbatos is not incredibly difficult, and should only take one or two hours for a standard build, three to four if you’re customizing. Due to the color of the parts, and how the pieces are attached to the frame, many of the pesky sprue bits and extra plastic that could tarnish the model are concealed or are attached thinly enough to make smooth cutting easy, reducing any unwanted frustration from a slip of the hand. This fact makes the model relaxing and easy for experienced builders, but a great build for entry-level Gundam enthusiasts.

Color details that differ drastically from the parts they are attached to are supplemented by stickers. In every case but one, these stickers fit nicely into grooves and look seamless with the rest of the piece. The one grievance I do have on this is that the pink detail on the center of the chest is actually a sticker placed over grooves. This is bewildering, as the other pink details on the suit are stickers that actually fit into the grooves. It can be tediously fixed by cutting out the sticker shape with a hobby knife. If you’re looking for the most detail out of the coloring on the model, though, you’re probably going to want to paint it. (If you’re not a professional, the stickers work just fine).

One of the most exciting aspects of this model is the inner frame. Commonly used in Master Grade, Real Grade, and Perfect Grade models, inner frames are essentially the “skeleton” of the model. HG models are typically just the armor pieces connected together, leaving a hollow interior, but this is not so with the Barbatos. Due to the General Grevious-esque nature of the suit, the inner frame allows the model to stay true to the show. This permits the suit to show off its wiring and increase posability without the large price tag of a Master Grade model.

One of the most exciting benefits of this feature is that it allows builders to customize the Barbatos with weapons and armor from other models in the Iron-Blooded Orphans line. Already coming with shoulder armor, two weapons, and a shield, the Barbatos can be customized with its own parts alone, but the real fun comes with mixing and matching parts from other kits. This not only allows builders to get more creative, it follows the show closely, as the janky old Barbatos also mixes and matches parts throughout its adventures. This level of authenticity only increases the value of an already impressive kit.

Bottom Line: For its inner frame alone, the Gundam Barbatos is an incredible kit for the HG line. I was very impressed with the level of detail on such a cheap model, but it shows that Bandai really is pulling out all of the stops for its Iron-Blooded Orphans line.

Recommendation: For $12 at most retailers (and cheaper other places), the HG Gundam Barbatos is an easy way to both add to your collection and have fun killing time waiting for the next episode of Iron-Blooded Orphans.