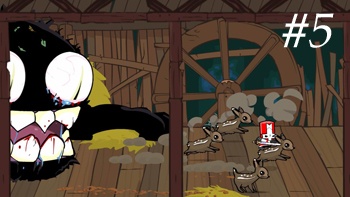 My gaming tendencies changed pretty drastically in 2008. After kicking a year-and-a-half-long World of Warcraft habit, I’m now more inclined to spend 15 minutes with Peggle than 15 hours with Fallout 3. Thankfully, this was a year where plenty of good games came in small packages. Here are some of my favorites:

5) Castle Crashers (Xbox Live Arcade) – Few genres have disappeared from the game designer’s repertoire as swiftly and completely as the beat ’em up (or, as I like to call them, “bmups”). Many of my favorite games as a youth involved stumbling around a faux 3-D playing field, sidling up next to my foes from above or beneath them until we were nearly superimposed, then praying I could pull off a grab before getting kneed repeatedly in the crotch. Castle Crashers wears the influence of these games on its sleeves: River City Ransom, Golden Axe, Streets of Rage … come to think of it, they were all pretty much the same thing. But it’s a fun formula, and it’s further improved upon by The Behemoth’s vaguely grotesque cartoon art and absurd sense of humor. There may not be much in the way of replay value, and the online functionality may still be broken, but Castle Crashers made me laugh and made me nostalgic. That’s more than enough to earn it a spot on my list.

4) LittleBigPlanet (PS3) – The first time I played LittleBigPlanet, I was baffled. How could a physics-based, 2.5-D sidescroller starring a humanoid beanbag be Sony’s flagship game this Christmas season? Then my friend grabbed a controller and we spent the next two hours running around LittleBigMexico with our tiny felt tongues hanging out of our mouths, slapping each other silly each time we came within arm’s reach of each other. That’s when it hit me: Underneath all the jetpacks, frying pans and goofy grins, Sackboy has a weird, almost slapstick pathos. Somehow Media Molecule has stitched burlap, buttons and beads into something more human and inviting than anything I’ve seen in Sony’s Home.

3) Braid (Xbox Live Arcade) – Creator Jonathan Blow’s indier-than-thou attitude may be a bit off-putting, but when it comes to some of his more radical ideas about game design, I usually find myself nodding in agreement. Braid puts many of those ideas into practice, and proves conclusively that gameplay can be fun and satisfying without resorting to the same tired “carrot on a stick” tactics. It takes time to wrap your head around some of Braid‘s more arcane puzzles, but the payoff is one the most thought-provoking and innovative games this side of Portal.

2) Left 4 Dead (Xbox 360, PC) – As a bullet-pointed list on the back of a box, Valve’s latest shooter fails on all counts. Only six guns to choose from? Six enemy types to kill? Four one-hour levels to beat? No single-player campaign? No wonder so many critics decried the games woeful lack of “content.” But Left 4 Dead‘s improvements to the genre can’t be measured in clip size or caliber. Instead, try counting the number of times you hear your teammates scream into their microphones for help, or reading your heart rate during one of the campaigns’ dramatic conclusions. Better still, hop into Xbox Live and notice how often you end up in a group that actually communicates. (No, racial slurs don’t count.) Through gameplay alone, Left 4 Dead consistently creates the kind of tension and drama that make other games’ most tasteful and cinematic cut scenes seem quaint and overwrought by comparison.

1) World of Goo (WiiWare, PC) – I’m at a loss to say whether World of Goo succeeds in spite of its two-person development team or precisely because of it. Either way, Kyle Gabler and Ron Carmel have created one of the most creative, delightfully weird and genuinely fun games to come out this year. Unlike Braid, where many puzzles have only one solution, World of Goo feels completely analog, like you’re playing with organic matter rather than pixels on a screen. And the music rivals even LittleBigPlanet‘s pitch-perfect soundtrack in helping shape the game’s bizarre atmosphere. If two former EA employees had this in them and others in the industry follow their example, I can’t wait to see what 2009 brings – you know, minus the whole economic meltdown thing.

Check back in tomorrow for Russ Pitts’ favorite games of 2008. In case you missed any of our Fave Fives, check out the full list.