Whenever you go to a large convention of any kind, you’re almost certainly bound to see at least some well-done cosplay – we’ve made showing you our favorites a regular practice at this point. For whatever reason, though, Blizzard’s annual celebration of its popular Warcraft, StarCraft and Diablo franchises seems to inspire a particularly high level of cosplay talent. Perhaps one ought to say a ludicrously high level of talent – this is, after all, the convention where an attendee was spotted riding on an animatronic turtle mount.

The Escapist was at BlizzCon 2010 last week in Anaheim, California. While we couldn’t take a picture of every single awesome cosplayer there – there’d be no time left to actually see the games – here are some of a few that we managed to catch (in actual photograph-able lightning, no less)! I swear that Diablo III monk who won the contest must have used Vanish as soon as she’d gotten off the stage … 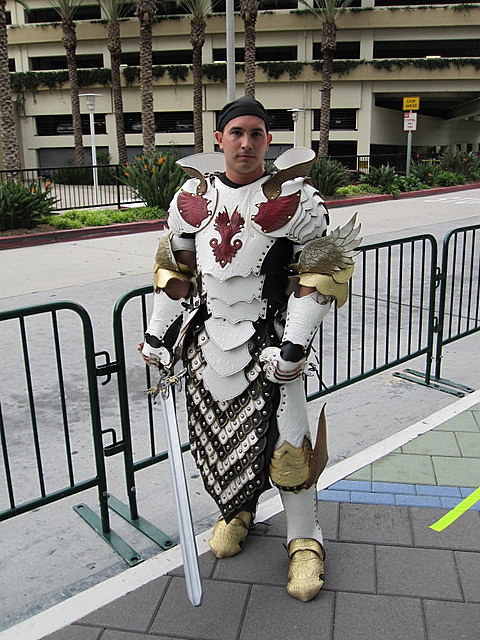 This holy warrior is ready to lay the divine smack-down on some demonic foes. 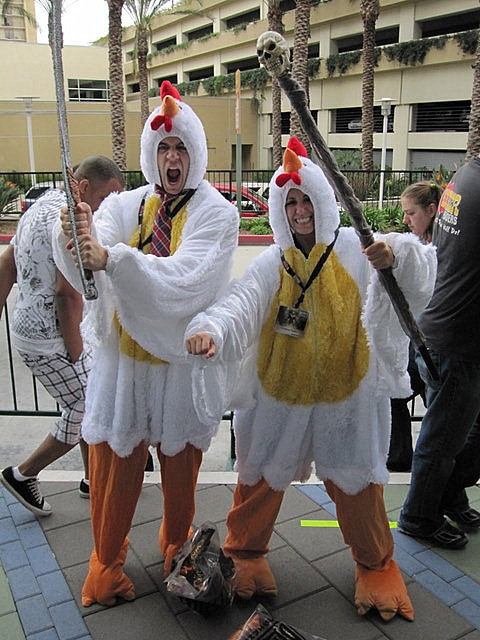 After being abused for so long, the Westfall Chickens will have their revenge. 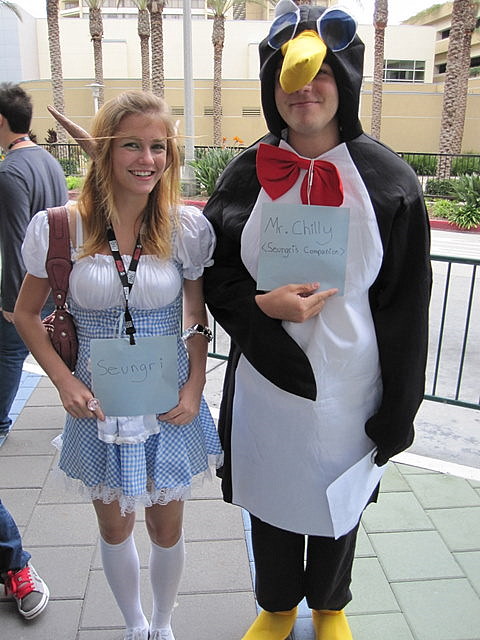 A Blood Elf might not be so out of place in California, but poor Mr. Chilly is probably mighty uncomfortable in that heat. 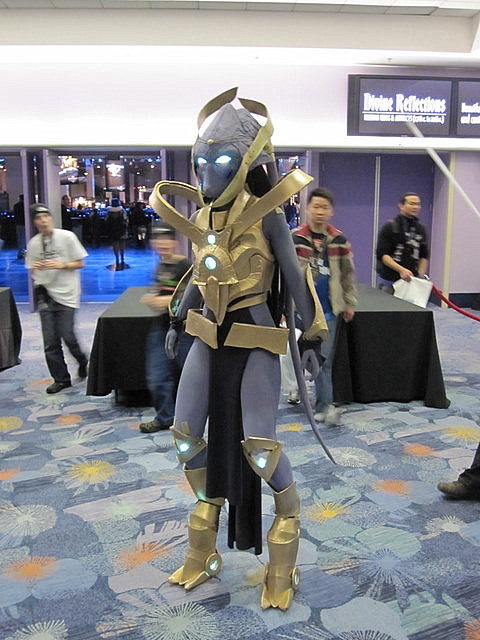 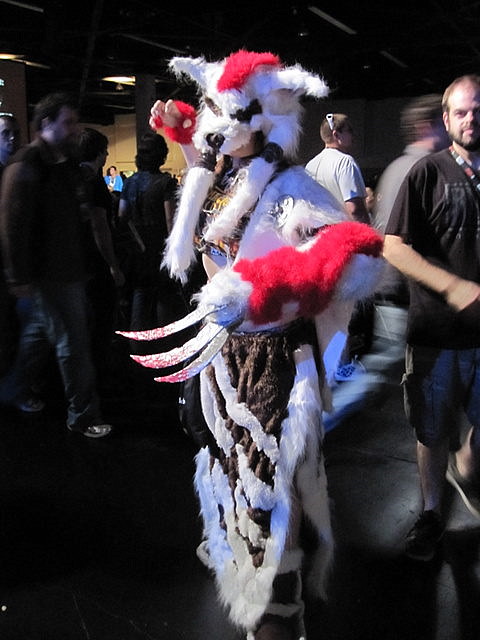 The Orcish Shamans from Warcraft III know that the Alliance has a version of their Bloodlust spell, and they don’t like it. 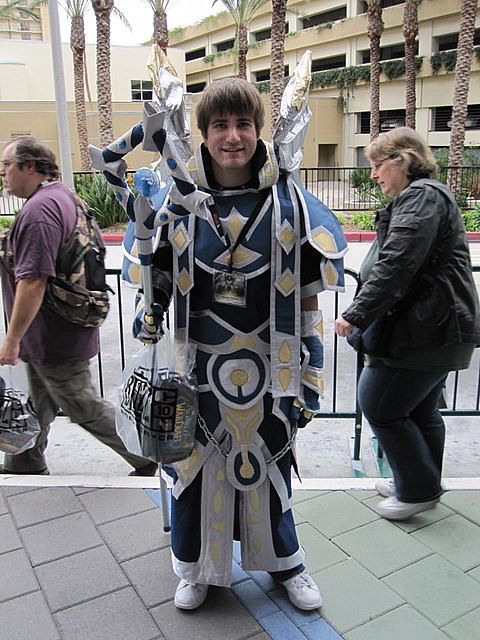 No need to fear the dreaded convention plague – not when there are epic-level Priests hanging around to Abolish Disease! 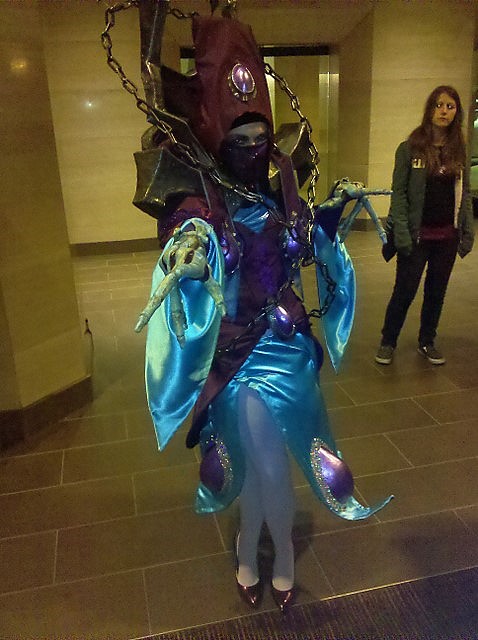 Lady Deathwhisper may not be bringing her epic loot to the convention, but at least she’s not reciting that super-long speech this time. 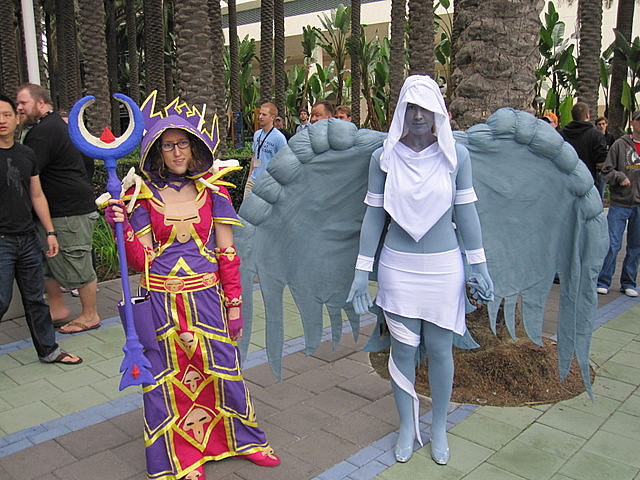 WoW players know the sight of the ghostly Spirit Healer entirely too well – and that Warlock is no exception. 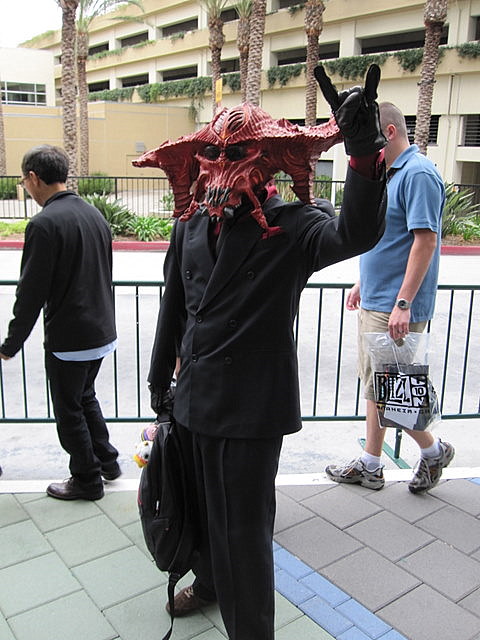 Sure, Diablo may be the Lord of Terror, but that doesn’t mean he can’t dress up for a business meeting at BlizzCon. We hear he’s renegotiating his contract. 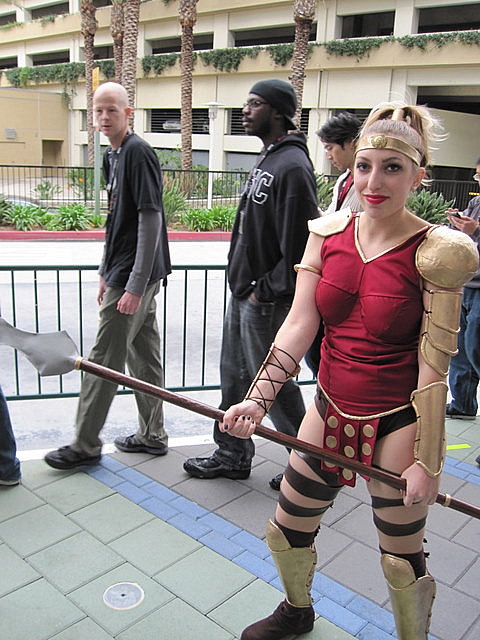 The Diablo II Amazon has a javelin and she isn’t afraid to use it. 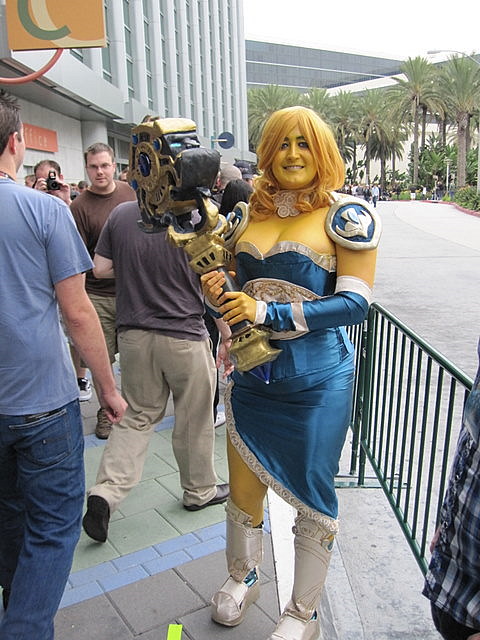 Is it the Maiden of Grief? The Maiden of Virtue? Whatever, I’m not arguing with a hammer that big. 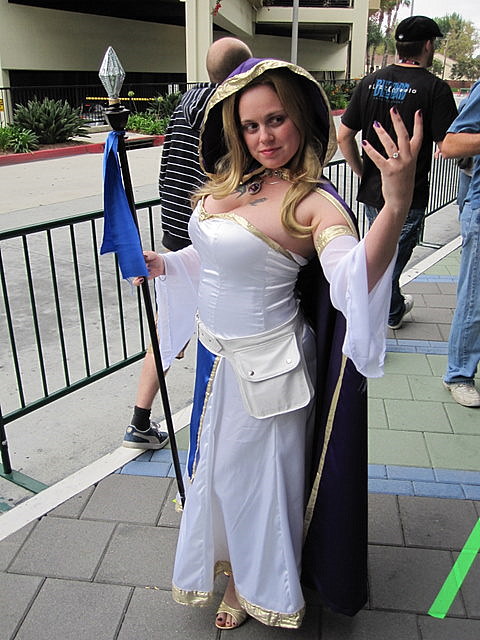 Shh. Lady Jaina Proudmoore’s trying to think, here. All she wanted was to study. 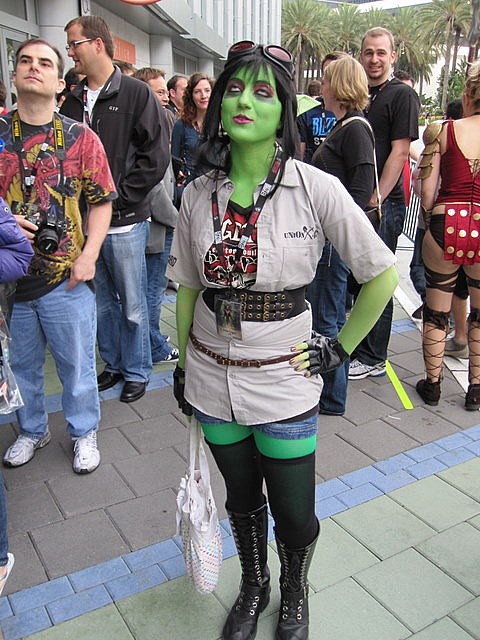 In Cataclysm, Azeroth’s Goblins are finally getting their due. Can you really blame them for coming out and celebrating? 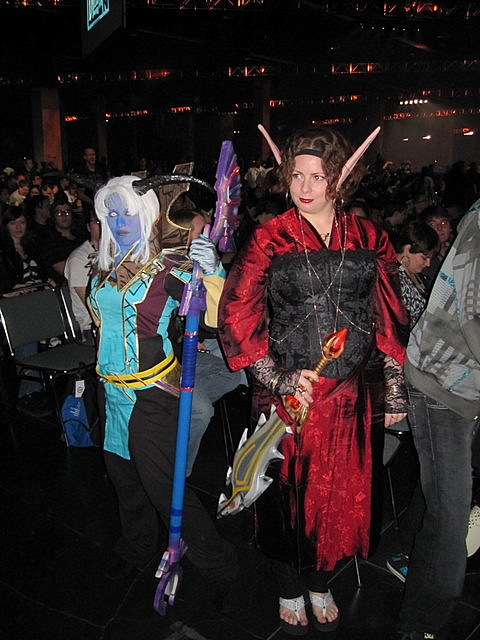 Only at BlizzCon could a Draenei and Blood Elf peacefully hang out together. 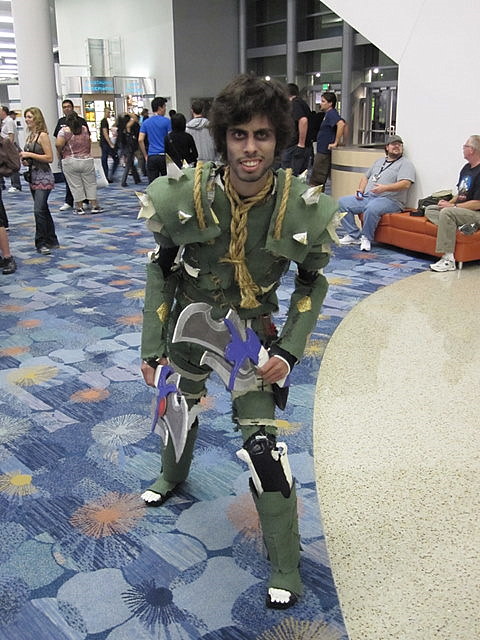 There’s nothing threatening about this WoW Rogue. It’s his partner behind you picking your pocket that you need to worry about. 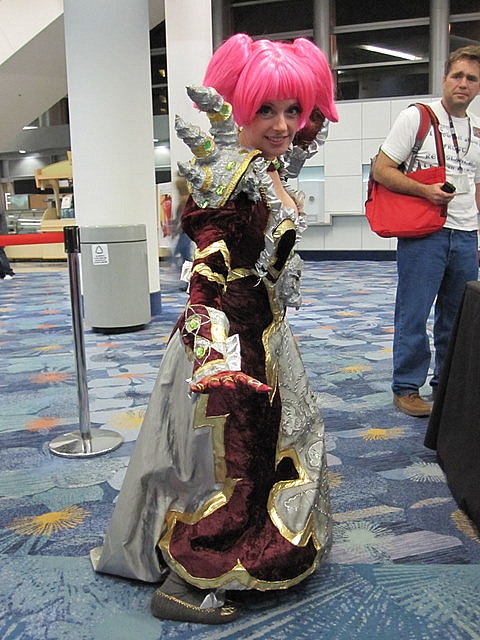 Gnome Warlocks: Proving that demonic, agonizing death can come in small and adorable packages since 2004. 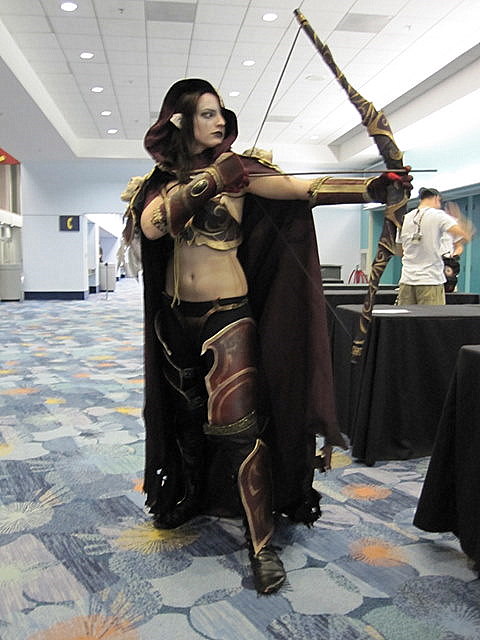 The Dark Lady Sylvanas Windrunner is all business, all the time. To be fair, undeath is probably one of the best reasons for being emo we’ve ever heard. 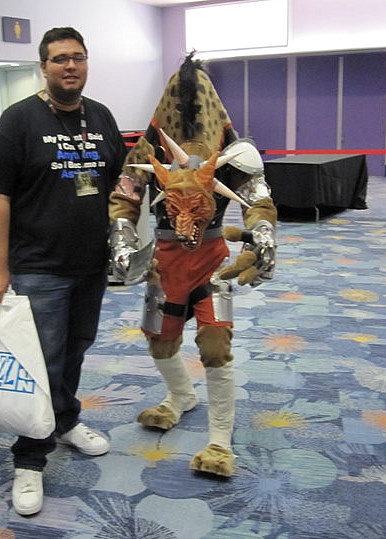 Oh no, it’s Hogger! Run, 10th-level members of the Alliance! Run for the hills and never return! (Until Cataclysm, anyway). 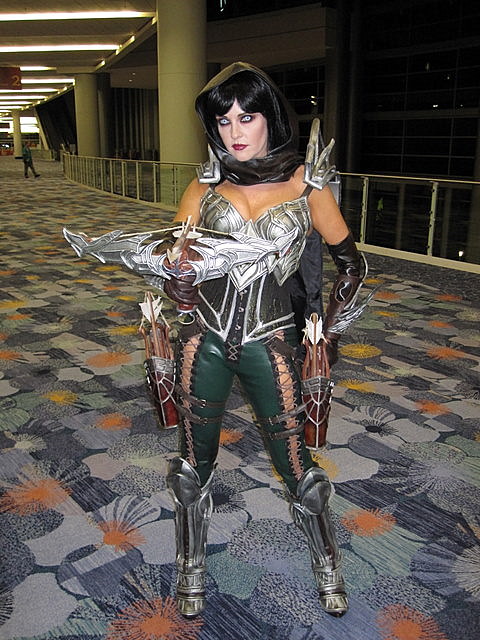 Okay, okay, this is technically cheating. Either this Diablo III Demon Hunter was psychic and predicted Blizzard’s class announcement, or this is an official Blizzard costume. That doesn’t make it any less cool, does it?