This past weekend, the crew here at The Escapist joined forces for a 24-hour marathon stream for Extra Life, on a mission to raise money for The Children’s Hospital of Philadelphia! 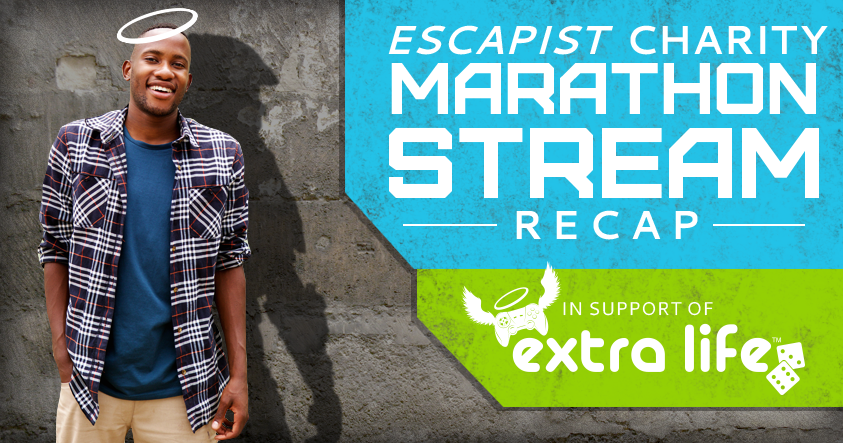 Prior to the official start of the 24-hour stream, we held our weekly podcast with Ron Whitaker, Ian Miles Cheong, John Markley, Yahtzee Croshaw, and yours truly, touching on topics such as Crytek failing to pay its employees, the newly revealed concept art for the upcoming Nintendo-themed Universal Studios attractions, and more, along with each of us admitting to our favorite guilty pleasure game. You can check out an archive of the podcast here – it’s always a fun time!

The streaming kicked off at 8pm ET on Friday, December 16, with Yahtzee Croshaw playing Hatfall and Panzermadels: Tank Dating Simulator, complete with colorful voice acting! We also welcomed my friend (check out that disclosure!) Nick Robalik as we streamed his game Sombrero, welcomed streamers Cody Hargreaves and Trisha Hershberger for some co-op fun with Astroneer and Broforce, respectively, and brought in my friend (look, another disclosure!) actor Elias Toufexis as John navigated Deus Ex: Mankind Divided and accidentally possibly caused an apocalypse. Nearly every member of The Escapist hopped in, either to stream or just to contribute to the discussion so the gaming wasn’t haunted by the overly-tired incoherent ramblings of lone streamers. We also got John to play Darkest of Days, a game that, if we’re being honest, really didn’t get as much credit as it deserved when it first released.

In spite of strange illnesses that mysteriously plagued several of the hosts and streamers, we managed to power through until 8pm ET on Saturday, with a brave few going even beyond that (I…was not one of them).

Our goal for the stream was $5,000, and despite offering John up as a sacrificial lamb with the offer of forcing him to stream Rogue Warrior in its entirety upon reaching that goal, we sadly fell a big short. We are still proud to share that we were able to raise help $4,163 for a wonderful cause. We were given the opportunity to merge our passion for games with the indisputable passion that many gamers have for helping others in order to help children.

Goal or no goal, every dollar that was contributed went towards making a difference in the world, and we are all grateful to everyone who helped make this a possibility. To our streamers, our viewers, our guests, and everyone who donated, we are grateful that you spent this time with us and helped with this mission. You’re all awesome!