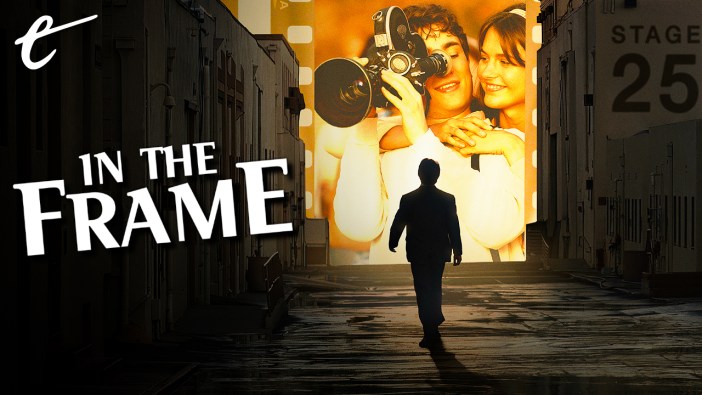 This discussion contains some spoilers for The Fabelmans, the latest film by Steven Spielberg.

The Spielberg face is one of the most iconic images in cinematic history.

It’s a familiar shot. A character is staring at something. They are often looking upwards. The camera pushes in on them, usually from a low angle. In that moment, the audience instinctively understands that, whatever this person on screen is looking at, it must be magnificent. Director Steven Spielberg is a pioneer in the field of blockbuster filmmaking, but that signature shot might be his single greatest special effect.

Perhaps that shot resonates because it manages to be both a perfect example of cinema and a constant reminder of the power of cinema. To see the Spielberg face on screen is to be reminded of the transformative power of spectacle. How many audience members made their own personal Spielberg face while watching Raiders of the Lost Ark or Jurassic Park? Spielberg constantly invites his audience to contemplate the wonder and majesty of the medium in which he works.

As such, it is perhaps a surprise that Sammy Fabelman (Mateo Zoryon Francis-DeFord) doesn’t wear the Spielberg face in the opening moments of The Fabelmans, as his mother Mitzi (Michelle Williams) and his father Burt (Paul Dano) take him in to see The Greatest Show on Earth. Instead, Sammy reacts with horror as trains crash into cars and each other. He sits silently in the car on the way home, staring into middle-distance. He is transformed, but not necessarily for the better.

Spielberg has been candid that The Fabelmans is his most personal work. It is, by his own account, “the story of (his) formative years growing up between 7 and 18.” It draws freely from the details of Spielberg’s own childhood. Many of the film’s events will be recognizable to anybody who has read about Spielberg’s life, right down to the account of teenage Sammy Fabelman’s (Gabriel LaBelle) encounter with director John Ford (David Lynch). 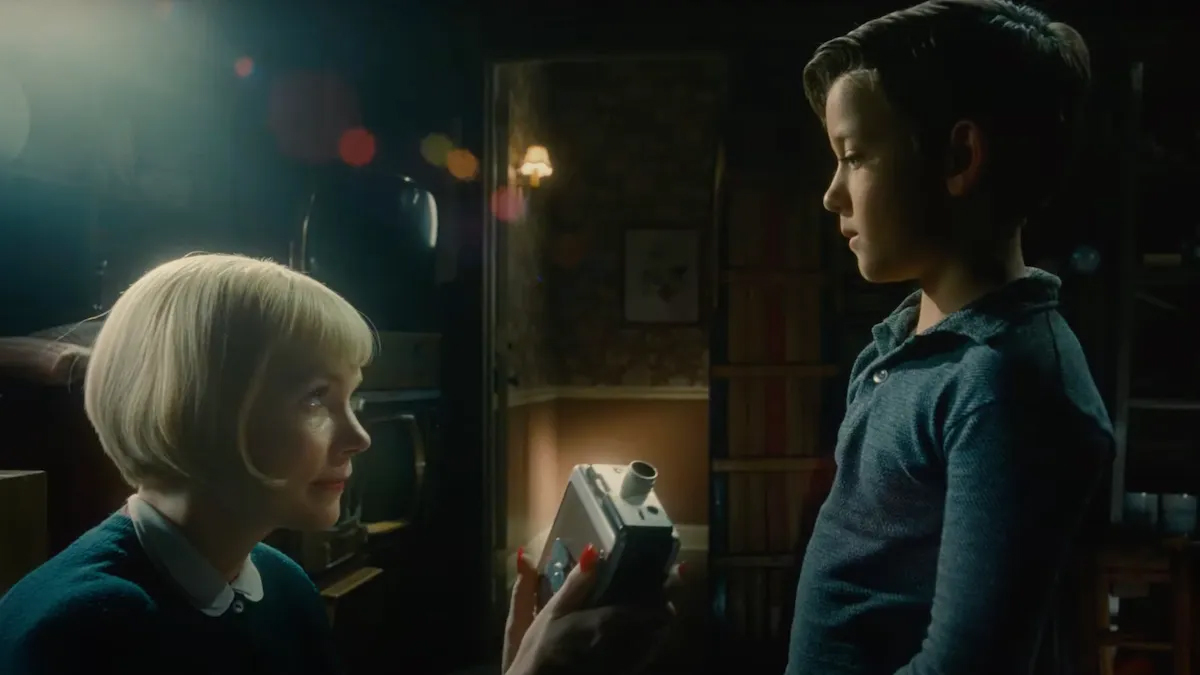 Ford looms large over The Fabelmans, just as he does over Spielberg’s career. Sammy attends a screening of Ford’s The Man Who Shot Liberty Valance, and there is a sense in which Spielberg’s semi-autobiographical film adheres to Ford’s bittersweet rumination on the urge to “print the legend.” Indeed, The Fabelmans is arguably something of a western itself, following the eponymous family’s push westward, from New Jersey to Phoenix to California.

With this in mind, it’s odd that young Sammy doesn’t want to attend his “first ever movie,” bluntly stating, “I don’t want to go in.” Mitzi reassures him, “They’re like dreams.” However, Sammy isn’t naïve. “Dreams are scary,” he argues. His mother tries to soothe him, “Some dreams are, but this is gonna be a nice dream.” She continues, “Movies are dreams, doll, that you never forget.” That second statement seems more true than the former.

Spielberg has been historically reticent to talk about or interrogate his own work. He once confessed that he was afraid that if he were to get psychoanalyzed, his movies would suffer because he’d become “more intellectual about them.” It was a surprise when Spielberg participated in Susan Lacy’s feature-length documentary examining his life and career. Lacy reportedly asked Spielberg if he had ever been to therapy, and the director responded, “No, but I think I’m doing it with you.”

However, Spielberg’s work itself may be a form of therapy. This is particularly true of his work after winning his second Best Director Oscar for Saving Private Ryan, a film that he made in part to understand his absent father, Arnold. Spielberg has jokingly described The Fabelmans as “$40 million of therapy,” a sentiment echoed by his long-time collaborator and co-writer Tony Kushner. As such, it makes sense that The Fabelmans suggests an equivalence between films and dreams. 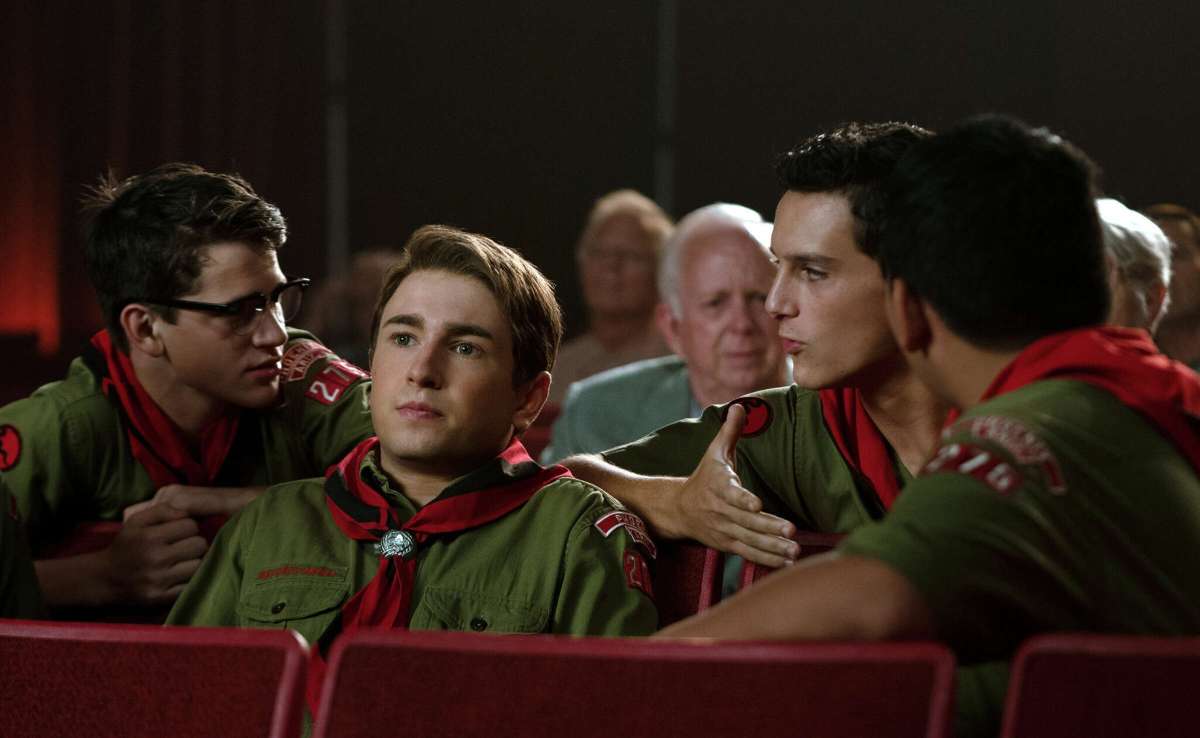 Characters in The Fabelmans are haunted by dreams that they don’t necessarily understand on a conscious level, but which speak to more fundamental truths. Mitzi is haunted by dreams of her dead mother (Robin Bartlett), who offers vague warnings of dangers approaching. Burt makes idle conversation about a strange dream that he had about punching his best friend Bennie (Seth Rogen), even though he’s not sure why he would want to do that. There’s honesty in these dreams.

Throughout The Fabelmans, Spielberg returns to the idea of the camera as something monstrous and horrific. At two points during the movie, Spielberg offers something of an inversion of the Spielberg face. As Sammy witnesses something, he reacts by pushing himself backwards from the image, rather than letting the camera press into him. As a child, he recoils in horror on watching his train set crash. As a teenager, he has a similar reaction to finding something hidden in his footage.

After Sammy expresses an interest in making films, Mitzi and Burt try to understand what appeals to him. Mitzi offers an opinion that fits with a standard line of criticism against Spielberg, contending that art is about “making a little world you can be safe and happy in.” This fits with certain accounts of Spielberg’s life and career, with Nicole LaPorte describing how much of the machinery around him “was about cushioning him from harsher truths, which some might term ‘reality.’”

Spielberg’s film both accepts and rejects this idea. The camera is an ordering principle. Late in the movie, Logan (Sam Rechner) offers Sammy weed. Sammy asks what it’s like. “It kinda shows you how out of control everything is,” Logan explains. “And how you’re not in charge of anything. And how it doesn’t matter.” Sammy declines, “I better not. In my head, everything’s already outta control.” Sammy has his own drug, and it lets him impose order on that chaos. 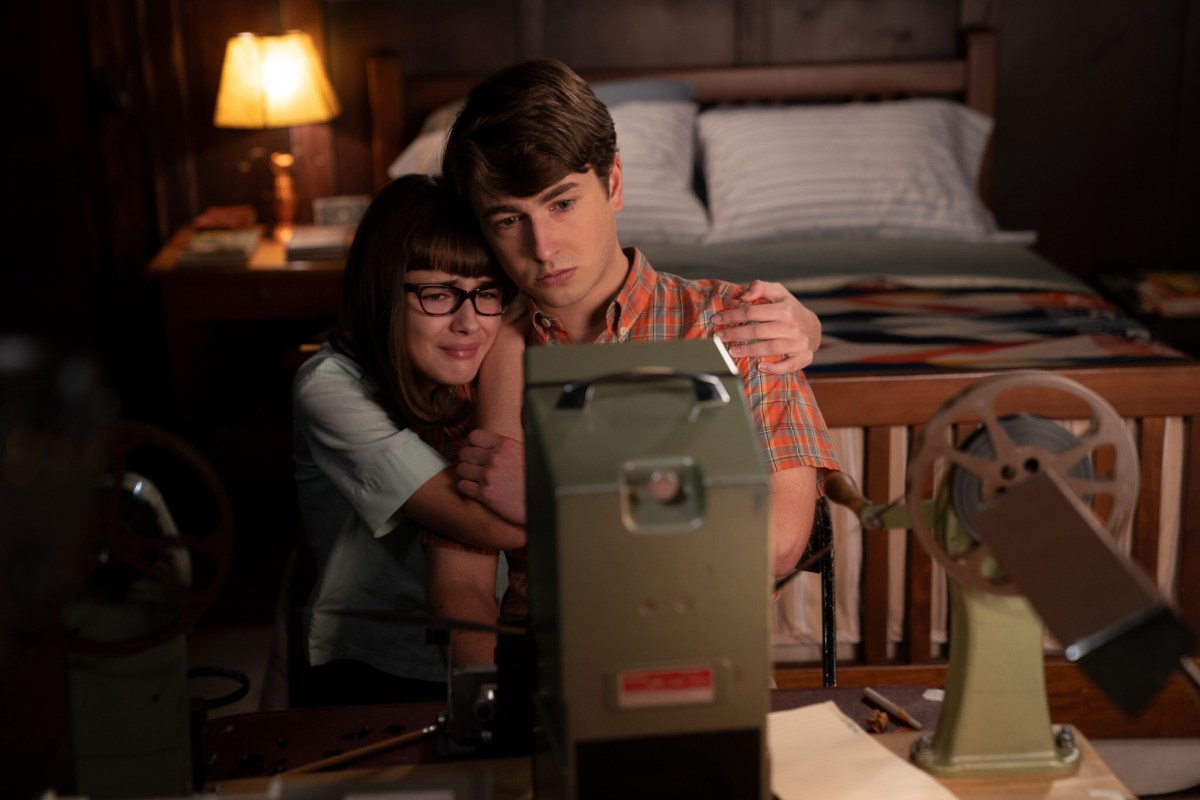 However, that ordered world isn’t always “safe and happy.” It is dangerous. The Fabelmans presents filmmaking as a horror story. The phone call from Mitzi’s dead mother warns about the arrival of Mitzi’s Uncle Boris (Judd Hirsch), who worked in Hollywood. He will only feed Sammy’s addiction. The Fabelmans treats his arrival as something from a horror story, a monster shambling up the driveway as the family hides in the kitchen. “You mustn’t let him in the house,” the call urged.

Boris warns Sammy about the high cost of pursuing his dream. He recalls that Mitzi herself had wanted to be a professional piano player, but their mother would not allow it. “She was scared,” Boris explained. “Scared for your mother. She should have safety in the family.” Describing himself as a “junkie” for art, Boris presents himself as a cautionary tale. “Look at me,” he insists. “Look at me! Is it a wonder that Tini, she wanted nothing to do with me?”

The Fabelmans suggests there is something inherently horrific in movie-making, in making dreams real. At prom, Sammy projects the movie he made of the school’s “Ditch Day.” He edits the movie to make fun of one of his bullies, Chad (Oakes Fegley). However, he also edits the movie to present Logan, another of his bullies, as a hero — as “a golden thing.” He makes Logan a celebrity. The crowd loves him. Somehow, this is presented as more horrific than the humiliation he serves to Chad.

“I can outrun any guy in Santa Clara County, and I worked real hard to do that,” Logan explains. “But you… you make me feel like I’m some kind of failure or a phony… or like I’m supposed to be some guy I’m never gonna be, not even in my dreams. You took that guy, whoever he is, wherever you got him from, and you put him up there, on that screen, and told everyone that’s me.” What seems like a romantic fantasy becomes a nightmare. It is a terrible thing to do to a person. 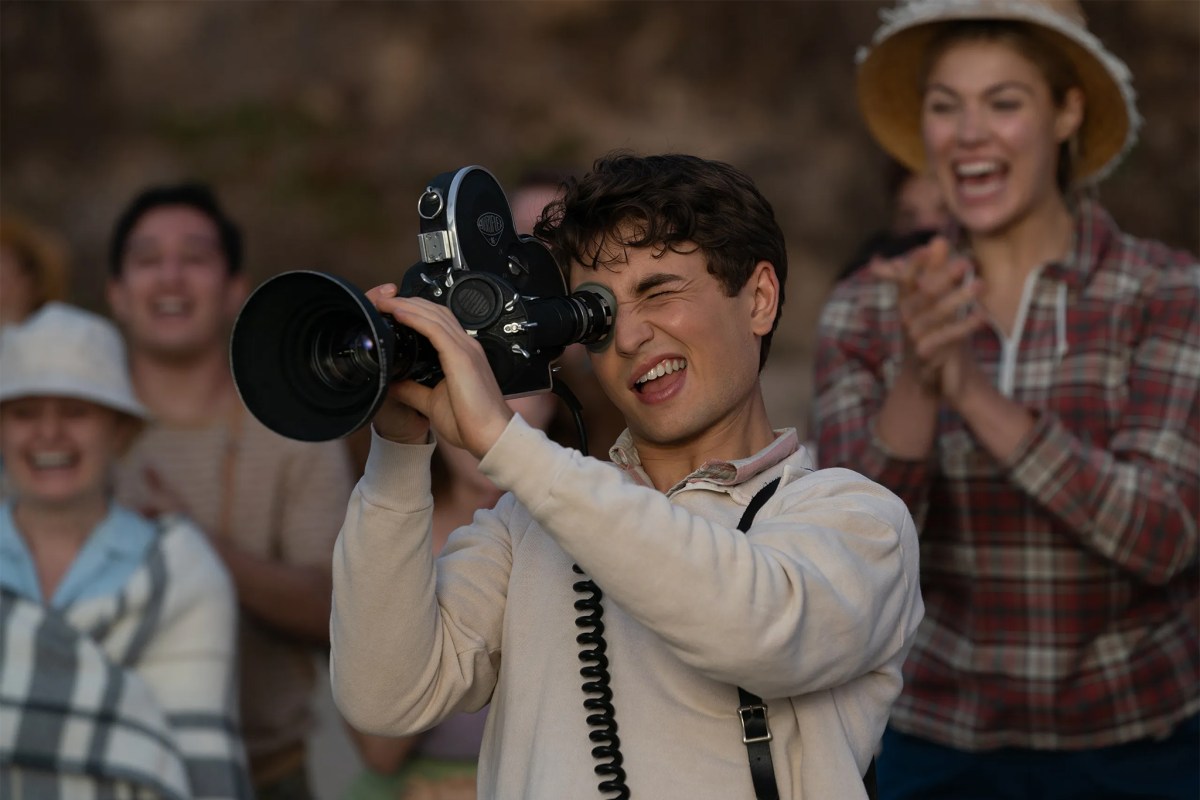 However, The Fabelmans suggests that the real horror is closer to home. Editing footage from a family trip to the woods, Sammy can’t help but notice how close Mitzi and Benny have become. They play together, they laugh together, they touch each other. It is not a physical affair. Indeed, it seems like neither they nor Burt is consciously aware of it. However, it is revealed through the camera lens. This unspoken and unarticulated thing is made real. It is seen, and it cannot be unseen.

Of course, familial dissolution is one of Spielberg’s pet themes. He has arguably replayed the formative trauma of his parents’ divorce countless times, impressing it upon millions of audiences. That too is a terrifying thing. After uncovering the footage of his mother and uncle, Sammy tries to direct a playful war movie with the somewhat revealing title Escape to Nowhere. Working with actors for the first time, Sammy seems to project his pain onto his leading man, Angelo (Stephen Smith).

“Your family’s being, like, murdered,” Sammy explains. “And it’s your fault. You did this to them.” He’s not really talking about the war film. He’s talking about the secret he has exposed to his own family. He continues, “You could have protected them. Okay? Because they trusted you. And they loved you.” This pain, transferred from Sammy to Angelo, shocks the actor so much that he is left in a daze. He just wanders, listlessly. Sammy’s pain flows through the film, vicariously. 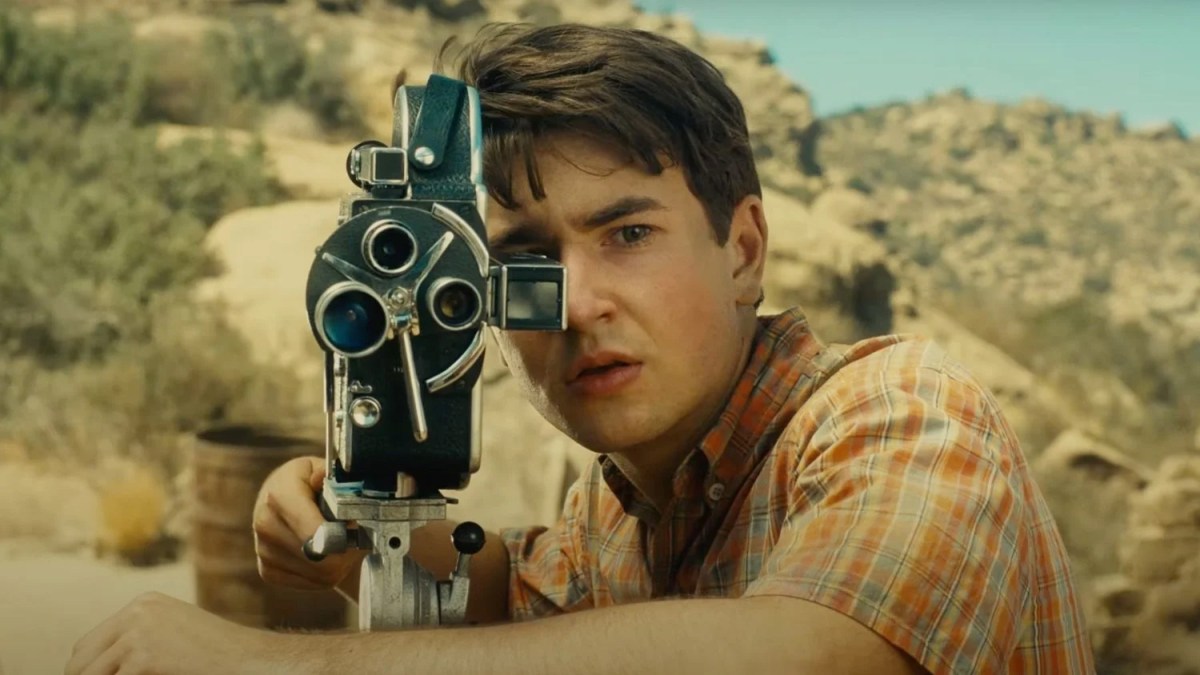 It’s a horrifying thought. Spielberg seems anxious about what he does and how he does it. “Why’d you do that?” Logan demands. “Why’d you make me look like that?” Sammy insists that he didn’t do anything; it was all the camera. “All I did was hold the camera and it saw what it was.” When pressed to explain himself, he can’t. “I wanted you to be nice to me for five minutes,” he guesses. “Or I did it to make my movie better. I don’t know why.” Sammy is a mystery, even to himself.

Spielberg shoots the scenes of Sammy projecting his movies like the opening of the Ark of the Covenant in Raiders of the Lost Ark, understanding the impact that these films have on people. When Sammy shows his mother the footage from the camping trip, she stumbles out the closet as if winded. What kind of person does this to another? More than that, what kind of person is compelled to do that? The Fabelmans is many things, but it is not sentimental and it is not nostalgic.

Spielberg’s 21st century work has often been a meditation on his own legacy, on the way that he has shaped and warped pop culture. The Fabelmans feels in part like a culmination of all this, but it is also more personal. It’s about the power of cinema, of being unable to look away, no matter how much one might want to.