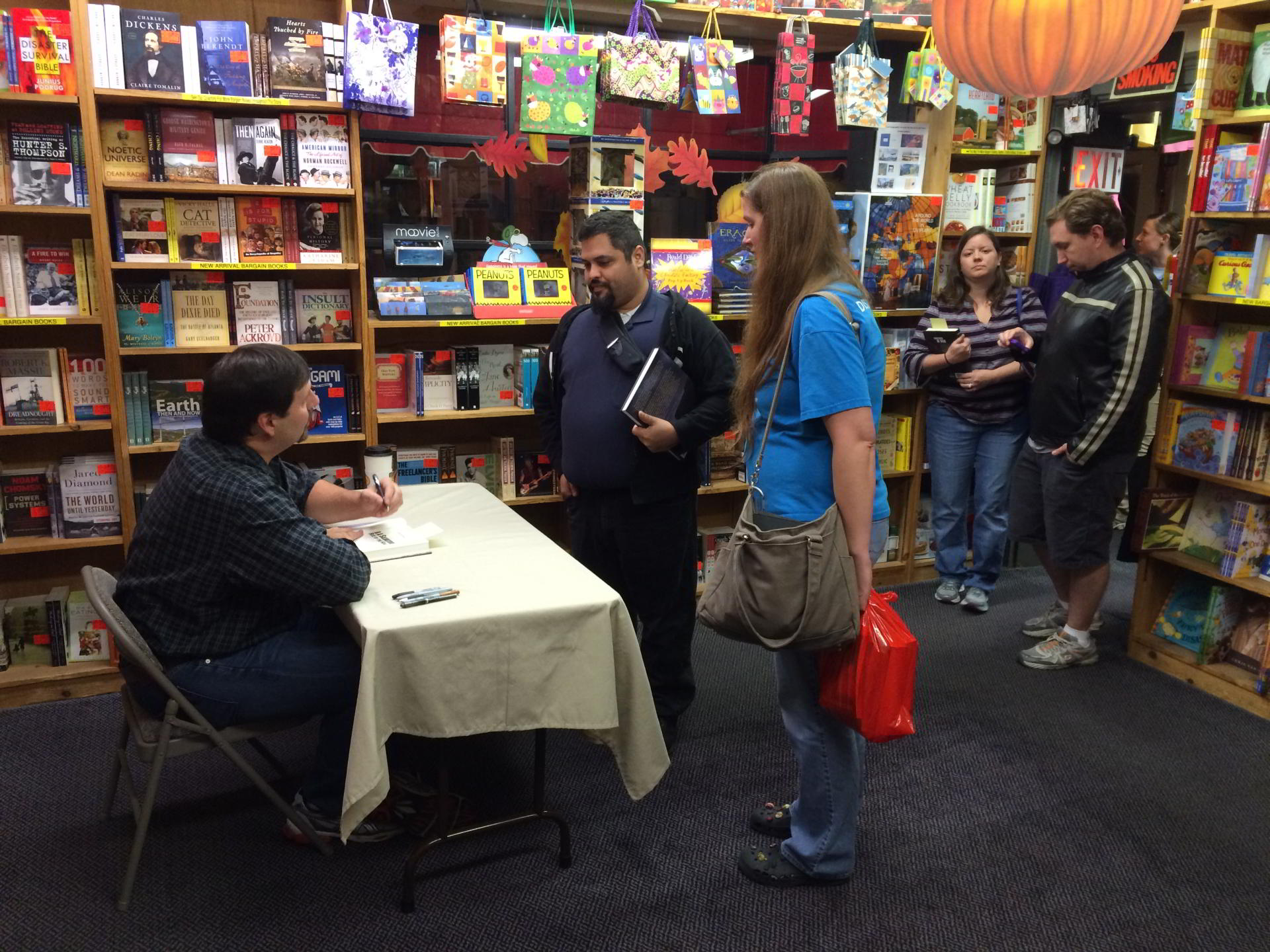 In part 1 of our interview with R.A. Salvatore, the author and I talked about his writing schedule and the back-and-forth creative process involved in writing The Sundering, one of the biggest events in the Dungeons & Dragons: Forgotten Realms campaign setting. Today, Salvatore digs into the collapse of 38 Studios, as well as DemonWars: Reformation, the tabletop RPG he co-designed with his son; the possibility of another Kickstarter campaign; and why he still prefers D&D First Edition to newer, shinier rule sets.

R. A. Salvatore has a reputation as a bulldog behind closed doors. He works without an agent, asserting that he can be as tough as he needs to be when it comes to looking out for his interests. But the author was powerless when 38 Studios began to crumble. “I remember when (a journalist} called me up and said, ‘They owe you $2 million. Why aren’t you suing Curt?’ Why would I sue Curt? He didn’t do anything wrong. He didn’t do anything nefarious. Maybe he made a couple of bad business decisions, I don’t know. But he didn’t do anything nefarious, and he got wiped out. He’s lying in the gutter and you want me to kick him in the head? Why would anyone do that?”

38 Studios enjoyed an auspicious beginning. Founded in 2006 by former MLB player Curt Schilling, the company published Kingdoms of Amalur, a single-player RPG for PC, Xbox 360, and PS3, in 2012. Salvatore was brought on board by Schilling, who called the author out of the blue one evening.

Giddy at the prospect of working with one of his favorite ball players, Salvatore signed on the dotted line and got to work designing a rich, 10,000-year back story for Amalur. “The world was created by my D&D group. I hired them before we had even formed the company to help me create a world. One guy and I really ran with it. We’d be on the phone watching History channel coming up with ideas back and forth, every weekend.”

Other luminaries joined 38’s ranks. Steve Danuser, a game designer on EverQuest II, headed up gameplay design. Legendary comic-book artist Todd McFarlane painted the look of the world, working closely alongside Salvatore to confirm that his art matched what the author envisioned in his head.

Then, in 2012, months after Kingdoms of Amalur‘s release, 38 Studios fell apart. The fall from grace left heads spinning, including Salvatore’s, who was not involved in the day-to-day operation of the company. The trouble started when Schilling relocated 38 Studios to Rhode Island when the state offered a loan of $75 million as part of its effort to help companies get off the ground.

“What I think happened at 38 was when we got to a point where we needed more money and Rhode Island came into the picture,” Salvatore told me. “The board decided to go with Rhode Island. From what I’m reading now, it sounded to me that as soon as people found out that Rhode Island was investing tens of millions of dollars into the company, vultures began to circle. They wanted to find ways to alleviate us of that money.” 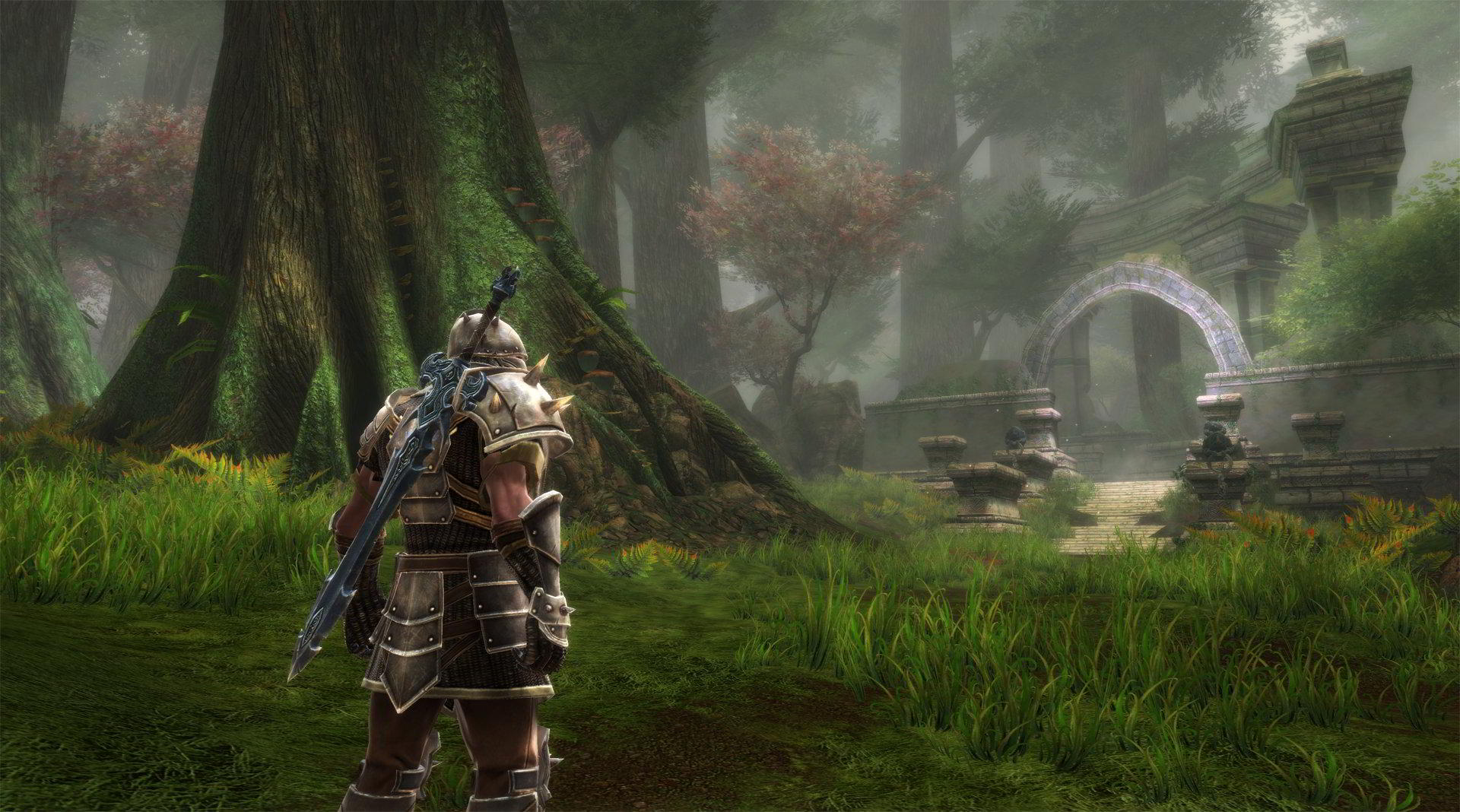 Salvatore held up a finger. “There’s one thing I want to clear up. There’s a rumor going around that [Kingdoms of Amalur] Reckoning sunk the company. Reckoning beat expectations. EA were the ones that funded the game with Big Huge Games [primary developer on Reckoning], and that wasn’t what I was working on. I was working on the MMO, Project Copernicus. EA funded Reckoning with Big Huge Games, and it was supposed to sell 1.2 million copies [by 90 days after release].”

Per a tweet sent out by Curt Schilling, Reckoning hit its projected sales marker.

Salvatore hopes the pundits pointing fingers at Reckoning will look instead to the finicky landscape of MMORPGs, and 38’s inability to secure more funding. “We ran out of money. The MMO grew too big, the market kept changing, and it kept getting more expensive to bring a game to market because you had to have these features in it or nobody would play it. We just got bled dry. It wasn’t Reckoning [that sunk the company]. The guys at Big Huge Games deserve nothing but applause for what they did.”

As for all the writing and world-building Salvatore did for Amalur, those documents, along with everything else 38 touched, are tied up in legal proceedings. “The State of Rhode Island has [the Amalur IP] in bankruptcy. Every now and then I hear about people who might want to buy it, and they ask me if I want to be involved. We’ll see what happens.” 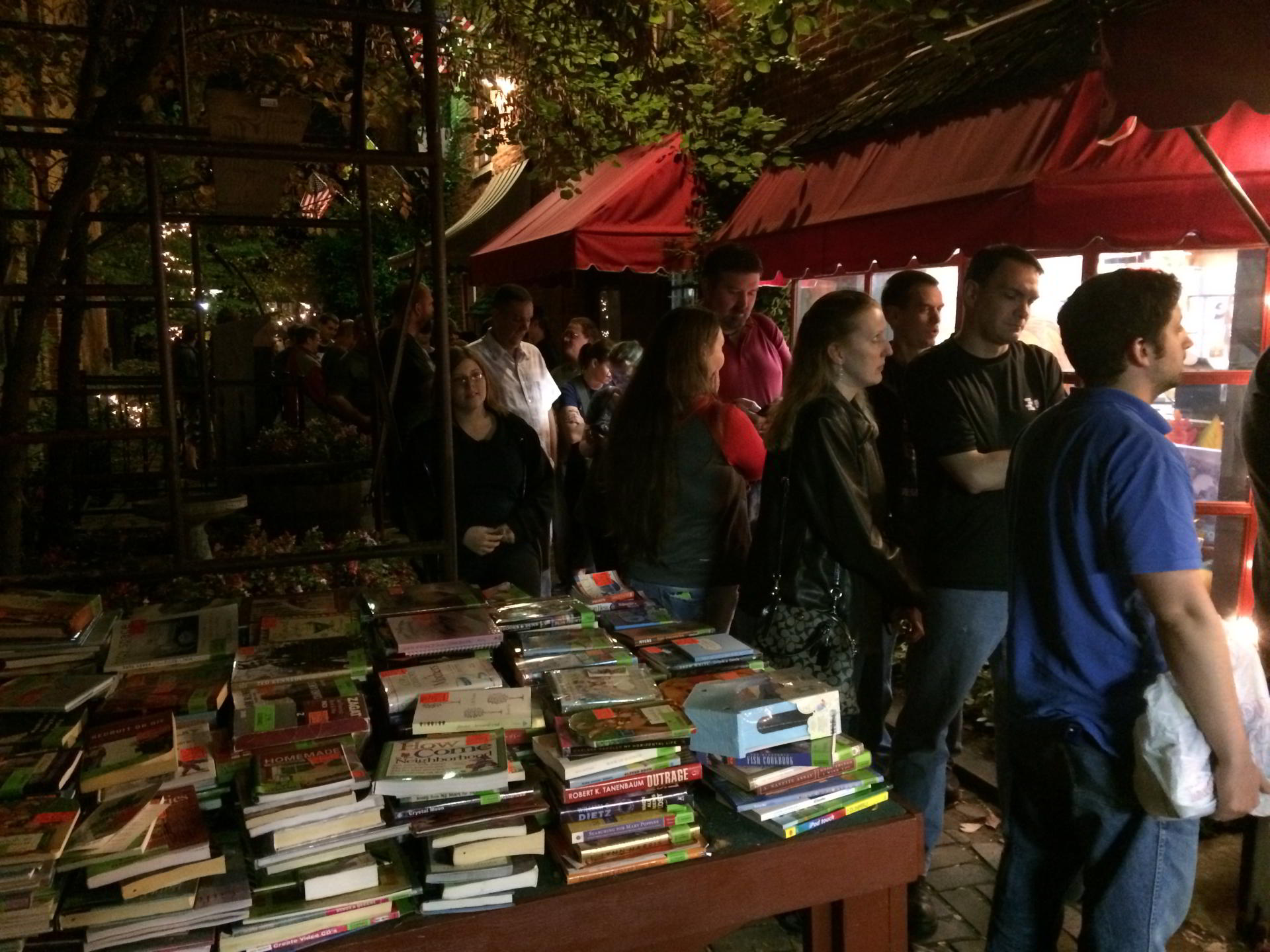 I asked Salvatore if, hypothetically, he would be interested in taking the Amalur IP and writing a series of books rather than video games, assuming he could get hold of the IP. He gave the matter some thought, then said, “No, I don’t want to buy it. First of all, I couldn’t afford it. [laughs] We’re talking a lot of money. But second of all, the amount of work it would take to bring it to game form, in any way, would require a team. I’m a writer. I’m not going to make the same mistake that Curt [Schilling] made and think I can run a company.”

If he were given the opportunity to pick and choose pieces of lore to retrieve from the debris of 38’s remains, Salvatore would reclaim the short stories that he wrote to promote the game. “I wrote a story for Curt for his 40th birthday. I love those stories and I want them back, but I would have to buy them. As far as writing books, we’ll see what happens. I’m just kind of sitting back and seeing what happens.”

Shaking his head, Salvatore closed the book on the subject of 38 Studios by saying, “I think it was a case of innocence colliding with very sharp people. It’s a very risky business to begin with. Computer-game companies get wiped out all the time, and this was just one of those situations.”

All in the Family 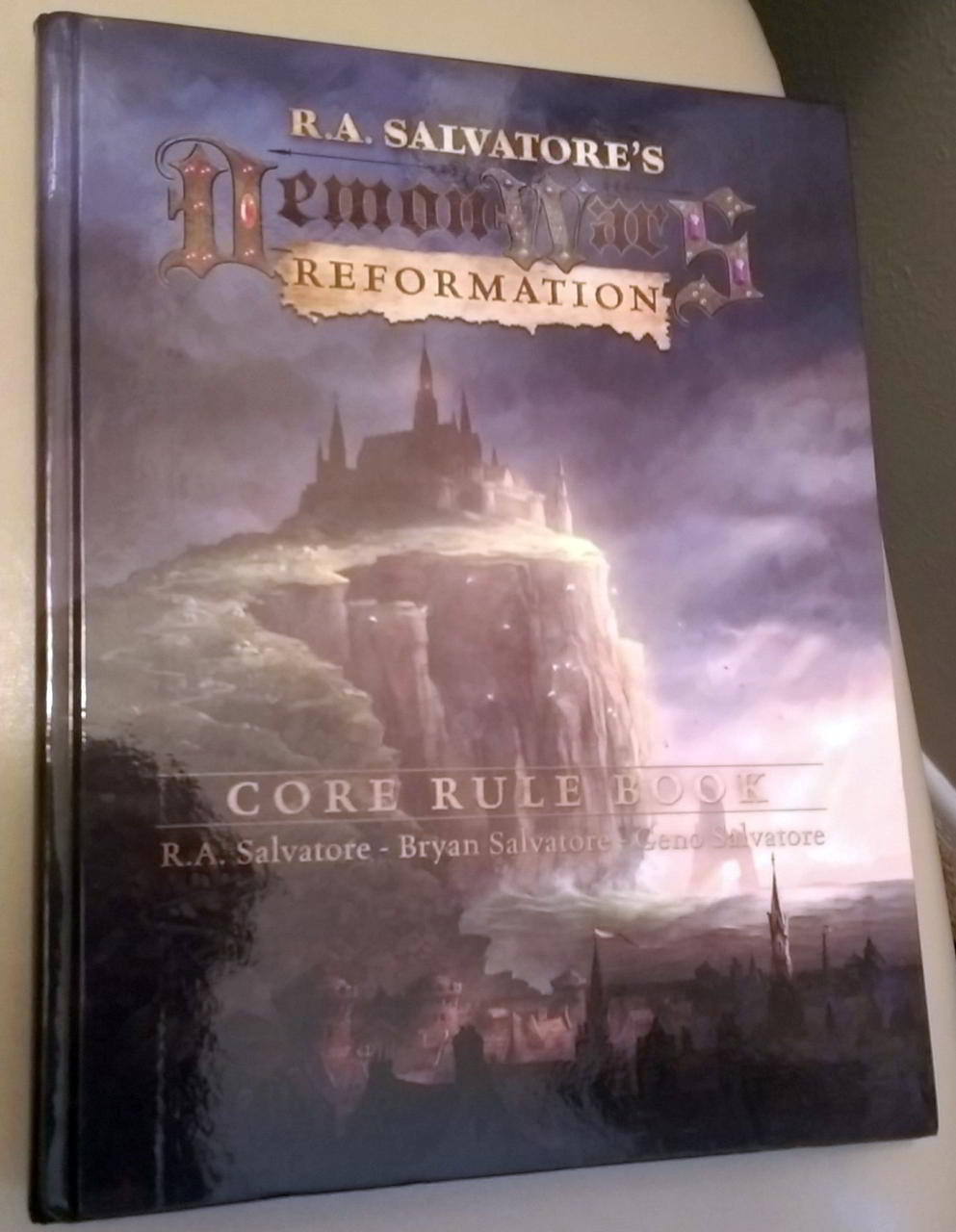 We turned our attention to DemonWars: Reformation. The tabletop RPG was designed largely by Salvatore’s son, Bryan, who had worked on game design at 38 Studios before the studio’s demise. “By the time 38 Studios collapsed, Bryan was the guy working on all the classes, all the monster abilities, all the balancing on the MMO. His bosses, huge names in the computer-games industries, were coming up to me and saying, ‘Bryan’s our star. We throw everything at him and he just keeps hitting it.'”

When 38 Studios toppled, Salvatore went back to writing books full-time. Bryan, however, was unemployed. Salvatore came up with something to keep them both busy. “I said, ‘Bryan, I designed this [tabletop] game in 1990. What do you think of it?’ He looked at it and said, ‘Well… it sucks. But I can fix it.’ So I said, ‘Well, fix it.’ We had a blast.”

The prototype Salvatore dug out of the closet was a standard dice-based game predicated on percentages. Bryan retooled the game, incorporating his father’s DemonWars setting and designing a fast-paced style of play that appealed to the elder Salvatore’s love of first-edition D&D. “In first-edition Dungeons & Dragons, you have to be able to think on your feet. That’s what I liked about EverQuest: monsters could spawn unexpectedly and people could betray you. You had to be agile because the unexpected was going to happen. You had to think outside the box.”

D&D’s debut edition offered players and dungeon masters (DMs) nearly limitless flexibility. In Salvatore’s opinion, future editions of the games restricted that freedom of choice. DemonWars: Reformation puts the players back in control. The game master (GM) can extend the rules to any off-the-cuff whim players come up with, keeping the pace snappy and the party engaged. “For example, if I’m on a staircase, and we’re fighting, and I want to jump off the staircase, grab the chandelier, swing across, drop behind the monsters and pop them one–the GM can assign a difficulty to that,” Salvatore said proudly. “I roll an agility to check and see if I can make it. Then I spend my balance to bring it up to the [agility] check so that I make it.” 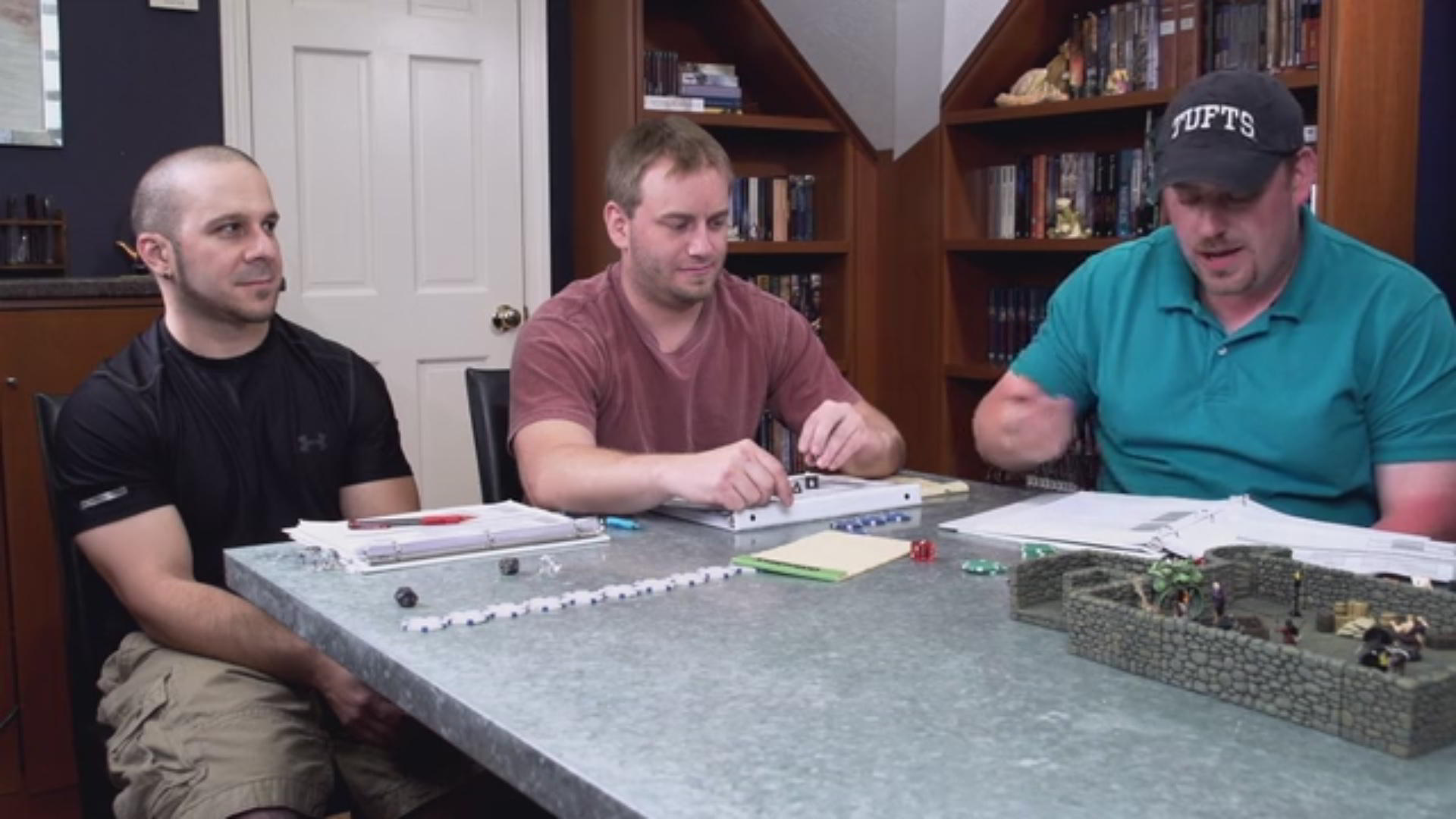 Salvatore and Bryan are eyeing another Kickstarter campaign to add more characters, as well as add options for party sizes. They hope players will experiment by mixing together different types of characters. Knights, for example, wear heavy armor and will triumph in most one-on-one encounters. Monks work better in a group. Each monk added to a group increases their strength, so a group of monks will likely walk all over a group of knights.

DemonWars: Reformation also gave Salvatore the opportunity to partner with his son Geno, the primary author of the Stone of Tymora books, once again. “We love working together. We’re doing another Kickstarter, and we might be doing some comics. ‘The Education of Brother Thaddius,’ the novella I wrote for the DemonWars Kickstarter, is going to Audible, to Kindle. There’s a new imprint comic company that said, ‘Are the comic rights available for that?’ We said, ‘Why yes, they are, and Geno and I would love to write it.’ So it looks like we’ll be working together a lot. It’s very cool. I love working with my kids.”

In the third and final installment of our interview with R.A. Salvatore, the author discusses the traumatic events that took place in his Transitions trilogy of Drizzt novels, and how he brought beloved characters back from the grave.