Summer gaming is here. Yes, it’s that wonderful time of the year when it’s too damn hot to do anything outside, (although I’ve got an excuse like that for each of the four seasons) and yet there are no videogames in sight. It’s a time in which we ostensibly finish old games or make resolutions like finally “catching them all.” Or at least it should be. The reality of summer gaming is more akin to catching fireflies and shoving them in a jar with a tuft of grass for food: The enthusiasm only lasts about three days before everything dies. And so it goes that the halcyon days of late spring quickly devolve into the dog days of summer.

The boredom of those summer months, firefly captivity aside, can be excruciating from a gaming perspective. It’s during these months that my standards lower and I end up buying or renting a game I wouldn’t touch otherwise, games like Metal Warriors, Prey and Rock and Roll Racing. Not that any of these games were awful, in fact Metal Warriors is almost an overlooked classic, but they just weren’t on the Christmas wish list.

The Games of Summer, as I’ll call them, are usually a disparate bunch of titles that weren’t necessarily released during the summer but somehow end up flying way under my radar until then. They all share some common features. For instance, one or more of them will likely attempt the achievements of a far more ambitious game and present middling results at best. Prey is a great example of this. It’s a decent FPS with some great ideas that never really come to fruition. The portal system is far from Portal and the variable gravity of the game feels like a rotating camera more than the Super Mario Galaxy feats that would eventually set the standard for the mechanic.

An extension of the same idea is that many of The Games of Summer will cover off on the latest innovations and trendy gameplay ideas. When Spider-man 2 came out, open world gaming was the catch phrase of the moment and the game didn’t disappoint, assuming all you wanted was something approximating a city with boring missions and empty streets. It did, however, have one great strength -it finally nailed the web slinging mechanic. That’s typical of The Games of Summer; they are all fun in some really shallow way. They’re also generally incomplete experiences, but confident in their stature as a mid-level product.

Another trait The Games of Summer share is unfortunate artistic direction. They will likely have some ridiculous looking protagonist on the cover. Take the NES game Power Blade. Clearly no one was going to spend their hard earned pennies on a game featuring a guy who wears Oakley M Frame sunglasses and throws a cybernetic boomerang, although I’ll grant you that in 1991 this premise was far less of a stretch. So naturally, I waited until the video store got it in that summer. Again, not a bad game. Crackdown, features similarly ridiculous protagonists that look like they walked out of a cartoon adaptation of Demolition Man or Time Cop. 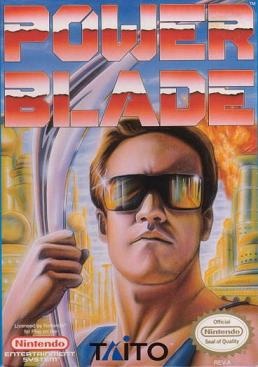 Of course, appreciating all this mediocrity requires a different mindset. Something about the hot weather and slower pace, combined with the memories of no school, allows me to lower my gamer guard. The stringent paces I put holiday games through are relaxed as I look for something to compete with channel surfing, mosquito swatting and the long wait for the soft serve ice cream truck. The Games of Summer require ample time for boredom and not the kind you look forward to, but the mind numbing when-did-life-get-so-dull type of boredom.

If you seek out these games expecting to find forgotten gems that snobbish reviewers passed over, you’ll be sorely disappointed. It’s the difference between Point Break and Road House. One of them you’d go see in the theater again, the other you’ll only watch in bits and pieces during periodic bouts of insomnia. These games aren’t good, but they fill out the video store shelves, to use a dated analogy. More appropriately, they now fill out the used games bin as well. I’m not suggesting that games with B- movie plots are immediate candidates for The Games of Summer. No, they have to have a mediocre combination of cheesy setting and decent, although never transcendent, gameplay.

This is part of being a serious gamer, experiencing the trash along with the treasure. Because it would be really easy to only experience the treasure. There are maybe five to ten games that come out each year that the serious fan will be compelled to play. We know months in advance what these games will be and while some are spectacular flops, most of them deliver. If there’s any meaning in seeking out The Games of Summer it’s to see what ideas and gameplay innovations have trickled down to these modest cash-ins, the titles that 14 year olds everywhere are spending their lawn mowing summer dollars on.

So allow me to close by recommending my favorite Game of Summer – Crackdown. It is a trash classic that requires about as much thought as channel surfing, but is at least twice as fun. It has a lot in common with that other film I mentioned earlier, and also watch exclusively in the summer, Roadhouse. Just like The Swayze, players of Crackdown walk around in truly ridiculous duds, sans mullet, and generally destroy everything that gets near them. I won’t even mention the plot. But, like Roadhouse’s bar room brawl with Sam Elliot and The Swayze, Crackdown‘s car throwing and building leaping pleasures can’t be denied – as long as the temperature outside stays over ninety degrees.

Tom Endo thinks that it’s summertime and the gaming is easy.