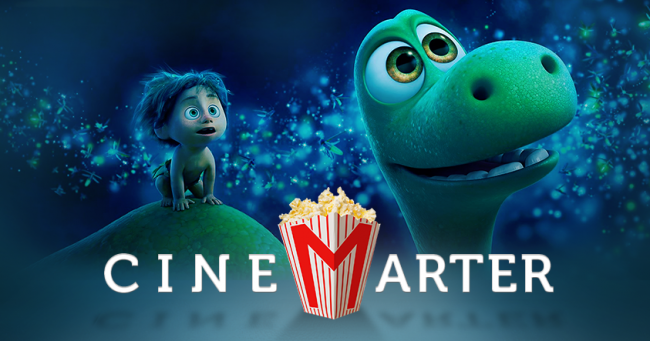 The Good Dinosaur might be a bit of a stretch. The Okay Dinosaur, or The Mediocre Dinosaur may be more accurate titles. While it’s true that little is actually wrong with The Good Dinosaur, it’s also true that, outside of some breathtakingly beautiful backdrops – which cause their own problems – there’s nothing right with it, either. It exists in the place that occupies the spaces between the good and the bad. Audiences emerge from this void apathetic to what they just saw, not sure what an appropriate reaction is. Perhaps no reaction is the best one in this case.

The film is set in an alternate timeline in which the asteroid that caused the extinction of the dinosaurs actually missed our planet, and, as a result, dinosaurs were allowed to continue to freely roam. As we begin, we find a family of Apatosauruses, who have become human-like farmers. The runt of the family, Arlo (Raymond Ochoa), fails at every task given to him, and is the type of character who is scared of his own shadow. So, when disaster strikes, it only makes sense that Arlo finds himself hundreds of miles – or just a few, because scope is hard – away from his home, unable to return until growing up and conquering his fears. 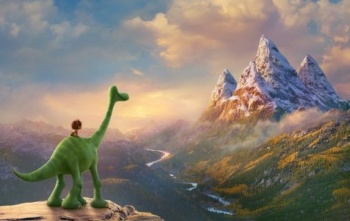 Along the way, Arlo teams up with a dog-like human whom eventually receives the name “Spot” (Jack Bright). And then … they just kind of go from place to place, doing a thing or two that’s not very interesting, all while progressing slowly toward Arlo’s home. They encounter … only a couple of other types of dinosaurs, come to think of it. They face … not much danger, really. And they learn … almost nothing until the very end, at which point the movie informs us that family is, indeed, important – but only if that family is genetically related to you, because how dare you form a surrogate family with anyone else? Homogeneity for all!

There’s almost nothing to The Good Dinosaur, which likely speaks to the production problems that the film faced. A hack-job like this had to be created to salvage the time and money spent, and, because of this, plays it safe at every turn and only has the barest bones of narrative, characters, and themes. Alternatively, perhaps we’re expecting too much. This is a Pixar movie – the second of 2015, after Inside Out, which was amazing – and, therefore, our expectations are automatically higher than with films from other studios. So, when The Good Dinosaur arrives and is functional but mediocre, it feels far more like a failure than if it came from, say, Blue Sky Studios (Rio, The Peanuts Movie, etc.), where it would come across as more of a success.

The Good Dinosaur is a mediocre movie that feels worse than it is simply because it’s a Pixar film, and we’ve come to expect so much more than this from the studio.

It’s also disappointing because of how much potential The Good Dinosaur had. Not killing the dinosaurs and allowing them to evolve in this film means that they essentially became humans. Getting to see how this affected more than one or two species, or actually exploring in depth how it affected them, is an intriguing proposition. But beyond “Apatosauruses become farmers; Tyrannosaurus rexes become ranchers/cowboys,” there’s nothing going on here. Instead of using this premise to do something interesting, the film uses it to immediately establish character stereotypes.

The best parts of The Good Dinosaur are easily the backgrounds, which are some of the most beautiful, photorealistic backgrounds you’ve ever seen in an animated film. You know how gorgeous The Blue Umbrella was? Take that, but an entire film – at least, when it comes to the sets. It creates an incredible sense of immersion – at least, until the dinosaurs show up and completely ruin the effect. The dinosaurs look like they were drawn by 10-year-olds in comparison to the backgrounds. They don’t fit, they look so much technologically inferior, and they honestly come across as lazy, both in their designs and in the effort it took to render them.

Meanwhile, we also have to listen to Arlo the whole time, whose voice actor, Raymond Ochoa, is more grating than endearing. The voice itself isn’t pleasurable, but the complete lack of anything to the performance makes it worse. You’ve got actors like Sam Elliott, Frances McDormand, Jeffrey Wright, Anna Paquin, and Steve Zahn in this film, and this is your lead? “Oh, but the kids will love it!” Yeah, well kids will be entertained for days with nothing but a cardboard box and crayons. And giving them those tools will teach them more about life than The Good Dinosaur, whose attempts to ruminate on family and death come across as laughable.

The Good Dinosaur is a mediocre movie that feels worse than it is simply because it’s a Pixar film, and we’ve come to expect so much more than this from the studio. This is right on par with Cars and Cars 2 in terms of quality. It’s got beautifully created sets that make its dinosaurs look ugly, it has a cookie-cutter plot that gives us nothing of interest, and it struggles to offer anyone under the age of 10 anything, which is something Pixar is typically good at. This is a studio that makes “family” movies, not “kid’s” movies. The Good Dinosaur is decidedly the latter, and that’s not a good thing. It’s a salvage-job that is technically functional and will entertain the children, but is a giant disappointment coming from Pixar.

Bottom Line: Not good, although not technically awful, either, The Good Dinosaur won’t entertain adults like most Pixar films, but its colors and bright lights will keep the kids focused on the screen for 90 minutes.

Recommendation: Show your kids the Land Before Time films – at the very least the first one – if they need a dinosaur movie.