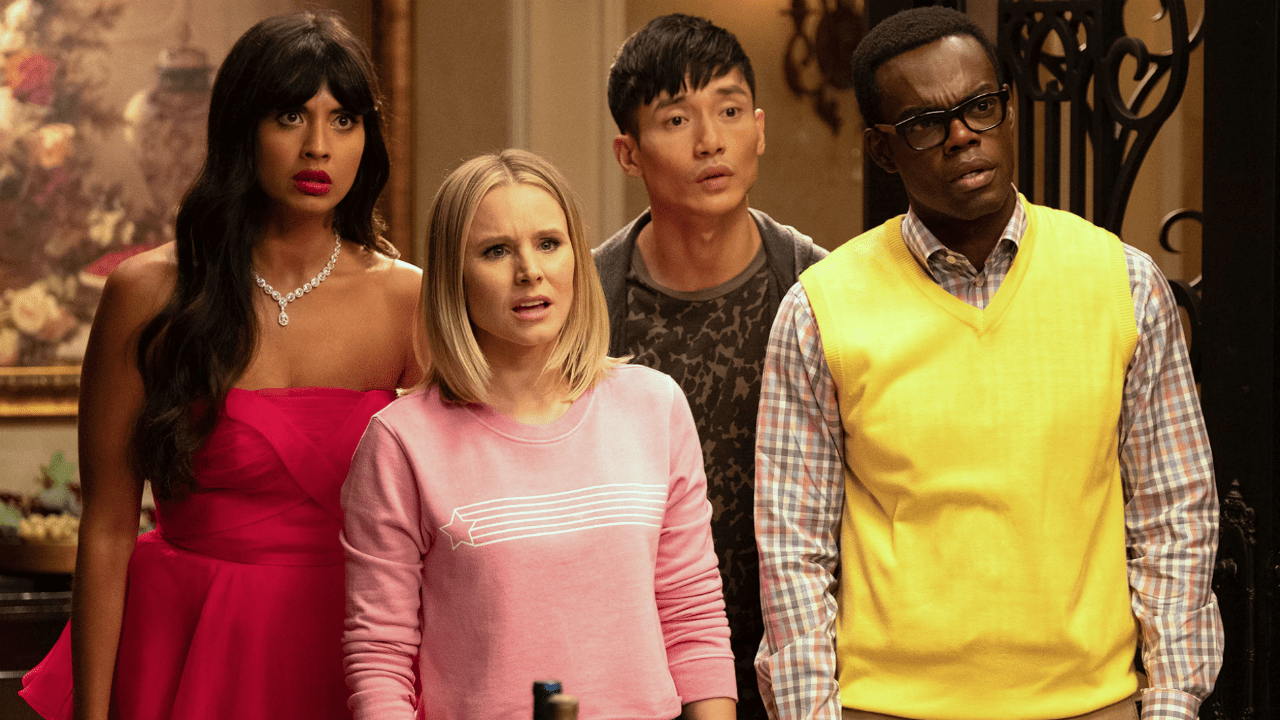 The last episode of the third season of NBC’s theological sitcom The Good Place culminates in a montage. Montages are always a sign that the writers have run out of ideas, but this one was even more pointless than most, showing a series of nostalgic clips from a relationship that never happened. Eleanor Shellstrop (Kristen Bell) and Chidi Anagonye (William Jackson Harper) have a romance that mostly develops offscreen, and which they mostly don’t remember. Their characters have come unmoored from character development. Like the show itself, they’ve lost track of themselves.

The Good Place is justly famous for its ability to reboot and reimagine itself. The series began with Eleanor finding herself in heaven — the Good Place — because of a bureaucratic error. A selfish, shallow, insecure asshole, Eleanor had gone to the Good Place instead of a humanitarian with the same name. Each episode of the first season involves her trying to keep Good Place architect Michael (Ted Danson) in the dark about what’s happened, while getting moral philosopher Chidi to teach her about ethics so she can become a better person and stay where she is rather than being sent to hell.

At the end of the first season, we learn that there was no mix-up. Eleanor is in fact in the Bad Place. She, Chidi, Florida wasteoid Jason Mendoza (Manny Jacinto) and socialite Tahani Al-Jamil (Jameela Jamil) are all part of an experiment by the Bad Place. They’re supposed to think they’re in the Good Place while torturing each other. Michael isn’t an angel, but a demon. His evil laugh when Eleanor figures out how they’ve all been fooled is the highlight of the series — and I’d say a highlight of television in the 2010s.

Amazingly, even after knocking over the entire premise of the series, The Good Place managed to avoid falling apart. Michael erased the memories of all the characters and tried to run his experiment over and over again. Eventually, Eleanor and the gang’s stubborn insistence on improving themselves and figuring out Michael’s evil plot converts him from evil to good. He starts working with them to try to get them into the real Good Place. Season 3 starts with Eleanor, Chidi, Jason and Tahani being sent back to Earth without their memories of the afterlife to see if they can fix their moral failings and become good people.

This is where things start to break down. Sitcom humor relies to a large extent on its characters’ flaws. The Good Place‘s first season, built on a corrupted utopia, exploited that brilliantly. Michael, the supposedly perfect angel, would snap in anger and kick a dog into the sun. Jason, the silent, noble, pure monk turned out to be a petty criminal scared to speak lest he be found out. Tahani, the glowing philanthropist, is a competitive ball of jealousy and insecurity who cheerfully insults everyone she speaks to. All of the characters are sympathetic, but they’re fun because they’re awful. As the series de-awfuls them, it also makes them more bland.

This is perhaps most evident with Chidi. In the first season, Chidi is an academic ethics nerd, obsessed with making the correct moral choices. He’s so obsessed, in fact, that he’s a neurotic, paralyzed mess who can barely make any decisions at all. Flashbacks to his time on earth show him agonizing for years over whether to tell a friend that his boots are ugly. He’s essentially selfish because he’s so concerned about his own moral standing that he can’t act on anyone else’s behalf. That selfish nerdiness is part of what makes him human and likable.

In Season 3, though, Chidi undergoes a transformation. By the final episode, he’s not indecisive; he’s a healthy, happy hero who’s willing to sacrifice himself unhesitatingly for the greater good. His past neuroses are reduced to a gentle joke — he talks about getting stomach aches when he’s nervous but the stomach aches themselves have largely disappeared. He becomes Eleanor’s boyfriend and flirts with her without reservation or self-consciousness. Harper seems to be playing a completely different, and much less interesting and distinctive, character. The same is true of Michael, Eleanor and Tahani. The only person who is still himself is Jason. His base stupidity never wavers, bless him.

The problem isn’t exactly that all the characters are too nice. The characters in Brooklyn 99 (also a project of The Good Place showrunner Micahel Schur) are all resolutely pleasant individuals, and that show is still funny after five years. Season 3 also isn’t a failure because of the heavy use of mind wipes. The science fiction show Dark Matter is about a crew of villainous pirates who lose their memories and end up choosing to be heroes. It’s a pulpy, preposterous, but nonetheless moving meditation on the link between memory and morality, and how your past does, or doesn’t, determine how good you can be.

The difficulty with The Good Place is that it seems to have lost touch with its characters altogether during all its changes of direction and dizzying reboots. The series doesn’t think about how people change when they forget who they are. Instead, it just makes them forget over and over, and then sort of vaguely posits that they’ll all come out basically the same, but better. An episode in which mystical demiruge Janet (D’Arcy Carden) plays all the main characters is supposed to be an acting tour de force, but instead it serves as an uncomfortable metaphor for the season’s weaknesses. The characters are all just caricatures of themselves, arbitrarily pushed about by the powers that be.

We never see Chidi and Eleanor fall in love. Rather, we’re told that they fell in love in various earlier simulations they don’t remember, and that’s supposed to be an adequate basis for their relationship. The romance at the center of Season 3 feels unearned and vaguely creepy. Eleanor and Chidi did have chemistry in the first season, but now they both seem to be swooning over simulacra of themselves. Season 1 was about heaven really being hell, but Season 3, inadvertently, makes you feel the horror of the abyss gaping behind the idyll.

The series may be able to right itself again. The actors are all excellent, and the writers still manage some good gags like a funeral for a stepped on snail including the eulogy “Martin was a lot of things. A snail mostly, but also a friend. Martin taught us about life, about love, and about the limits of scotch tape.” The set up for Season 4 looks more stable, which could help. But The Good Place Season 3 is a painful reminder that it’s hard to be good when you don’t know who you are.