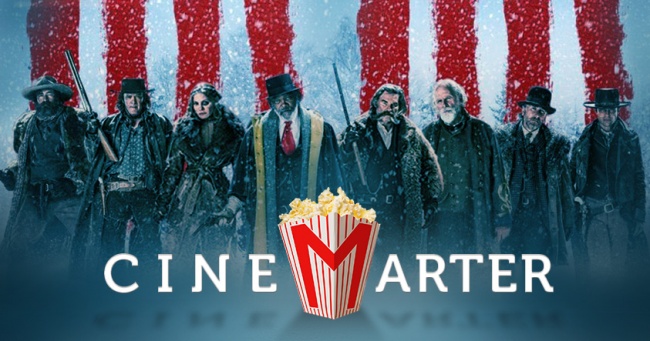 The Hateful Eight marks the eighth film from director Quentin Tarantino – according to the man himself. It’s really nine, as Kill Bill was released in two volumes and Tarantino didn’t seem to have any difficulty taking money twice so people could see the whole thing – but that’s an argument for another time. The point is: we know pretty much what we’re getting into when we go see a “Quentin Tarantino movie.” It’ll be a long film filled with lots of (often profane) dialogue – some of it completely unrelated to anything that matters in terms of the plot – with sporadic, over-the-top violence mixed in. The settings and plots change, but the formula more or less stays the same.

So, it should come as little surprise that The Hateful Eight does, indeed, stick rather rigidly to this formula. The setting is post-Civil War America, in the middle of a blizzard. The characters come from various sides, have different motives and prejudices, and they’re forced to wait out the blizzard in Minnie’s Haberdashery. One of them is a bounty hunter nicknamed “The Hangman” (Kurt Russell), who is carrying Daisy Domergue (Jennifer Jason Leigh) to a nearby town to, well, hang. The plot eventually hinges on one of the other characters – or perhaps multiple other characters – having plotted with Daisy in order to ensure her escape prior to her arrival. 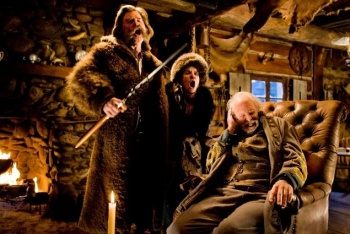 As such, the film evolves into a thriller in which both the characters and the audience are trying to figure out who’s on whose side, and for what reasons. The dialogue early in the film has all of the characters trying to learn as much as they can about each other. Later on, what’s been uncovered becomes imperative in hopes of figuring out who might try to cross The Hangman.

The dialogue in a Tarantino film is almost always a highlight, so giving it this extra edge makes it even better. As soon as we arrive at the haberdashery, each scene is filled with so much tension that you very well may be sitting on the edge of your seat for a good portion of the film – which is over three hours long, if you watch the 70mm version, and only 20 minutes shorter in its general release version. There’s a genuine feeling that any of these characters might go off at any moment, and waiting for that – alongside this wonderfully lively, entertaining, funny, and informative dialogue – is a good chunk of the fun.

It’s got interesting dialogue and characters, such a tense atmosphere that you eagerly await one of these individuals to explode, and wonderful acting from most of the cast.

It’s a lot like The Thing in that regard, which makes it all the more fitting that The Hateful Eight‘s score uses three unused songs from The Thing. People sit around, talking, and trying to figure out key things about the others that might save their lives. This is a talkier film, of course, but the basic principle is the same. And it works exceptionally well once again here. This isn’t a film that’s really “about” a lot on the whole – although there are some points made from some of the key dialogue sequences – which might bring it down in some people’s eyes, but it’s still one heck of a ride.

The Hateful Eight also contains a few key instances of rather intense violence, as is to be expected. We’re not getting anything like the climax of Django Unchained, but the violence may actually be more impactful this time out. It’s primarily targeted at Jennifer Jason Leigh’s character, who more often than not acts as a punching bag for the Kurt Russell character. And even though she grins through it and continues to taunt him, it does sometimes feel excessive and lingering. The only other uncomfortable moment comes from an extended monologue delivered by Samuel L. Jackson that involves … something I won’t describe, but we get to see at least part of it even though he’s talking about something that may or may not have happened in the past.

Jackson serves as the closest thing we get to a lead. This is a pretty even ensemble picture, even if a few characters get more to do than a couple of others. Jackson, Russell, Leigh, Walton Goggins, and Tim Roth get the showiest of performances. Demian Bichir, Michael Madsen, and Bruce Dern are relegated mostly to the background, save for a couple of key moments. The acting is quite good, with Jackson, Russell, Goggins and especially Leigh being standouts. Tim Roth feels like he’s trying to play Christoph Waltz, an actor with whom Tarantino has worked on his previous two films, but Roth is still more than adequate. These aren’t easy roles to play, especially with all of the line memorization and subtle facial movements, but the actors are more than up to the task.

If you’re tired of what Tarantino has to offer, The Hateful Eight is going to frustrate you more than entertain you. But, if you aren’t – and, really, nine films like this in 23 years isn’t a grotesquely large number at all – The Hateful Eight is going to be a very fulfilling, funny, and thrilling three hours. It’s got interesting dialogue and characters, such a tense atmosphere that you eagerly await one of these individuals to explode, and wonderful acting from most of the cast. It gets a little difficult to stomach at times, it’s probably 30 minutes too long when all’s said and done, and it’s not really “about” a whole lot, but I had a very good time with The Hateful Eight, and as far as I’m concerned it’s another success for Tarantino.

Bottom Line: A talky movie about people trying to figure each other out, The Hateful Eight is a tense, thrilling, funny, and entertaining movie that might not reach Tarantino’s top tier of films, but sits very close.

Recommendation: Unless you can’t handle extreme violence and lots of profanity, or are tired of Quentin Tarantino’s films, The Hateful Eight is absolutely worth seeing.