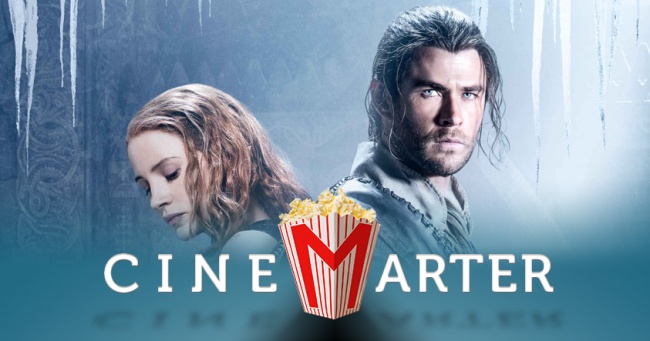 One of the most unbelievably bland movies I’ve ever seen was Snow White and the Huntsman, a grim-dark retelling of the “Snow White” story, one that turned Snow (Kristen Stewart) into a sword-and-shield-wielding warrior and teamed her up with The Huntsman (Chris Hemsworth) in order to take down her stepmother, the evil Queen Ravenna (Charlize Theron). It made way more money than it should have, so talks of a sequel quickly began – only to be derailed when the affair between Stewart and director Rupert Sanders became public.

What resulted is a prequel, midquel, and sequel to the first film. The advertising – and subtitle – might make you think that The Huntsman: Winter’s War is about a battle over the throne between Ravenna and her younger sister, Freya (Emily Blunt), but that’s a deceptive marketing tactic. It’s about The Huntsman and his love interest (Jessica Chastain) looking for a MacGuffin to take down Freya, who is evil after having her daughter murdered by someone in whom she believed she was in love. 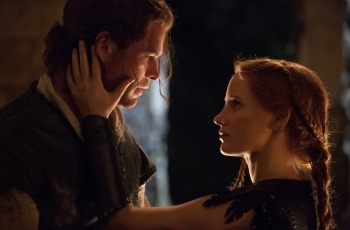 It gets interesting when we find out – as the trailers already revealed – that the MacGuffin is the Magic Mirror from the first film, and that it contains the spirit of Ravenna. A better movie would see the two sisters fight over the throne, like the marketing suggested. What we get is another unbelievably bland movie through a magical kingdom, and then a pretty fun final 10 minutes. The only thing that elevates The Huntsman over the first film is that it isn’t a dreary experience; there’s some levity along the way, and Chris Hemsworth’s taking the whole thing with the same amount of seriousness that one should take any project with a magical mirror – unless, of course, that mirror is the one found in Oculus.

There were only two strong elements in Snow White and the Huntsman. The first was Charlize Theron’s performance as the evil Queen Ravenna. She commanded the screen, and every scene in which she was featured was worth watching. She’s fine, too, in this one, although her total screen time is probably less than 10 minutes. Instead, we get Emily Blunt’s Freya, who gets sufficient motivation for her heel turn, but Blunt’s icy portrayal never really takes off – especially when compared to her on-screen sister.

The Huntsman: Winter’s War is the prequel/sequel you didn’t think you wanted, and it turns out that you were right.

The other strong element from the previous film was the special effects. Snow White and the Huntsman is actually a two-award Oscar nominee, both for Best Visual Effects and Best Costume Design. It was a dark, dreary, and generic film, but it looked pretty good. The visual effects supervisor – and second unit director – from the first one, Cedric Nicolas-Troyan, has been tapped to take over directorial duties. There’s nothing particularly noteworthy about the direction, honestly, and the effects range from strong (most of the ice effects) to laughable (turning Ravenna into a tar monster).

It feels as if The Huntsman: Winter’s War wants to answer questions we had about its universe. It is partly a prequel, and spends a lot of time developing the place in which it’s set – as if it hopes we’ll care and want to spend more time in this world with future installments. Most of that is unnecessary, and might just be to pad the running time to feature length. The plot, on the whole, is as generic as they come, even when taking into consideration a couple of turns that you’ll only not see coming if you’re still an infant. The film also feels like it borrows so heavily from Frozen that if Olaf showed up and sang a song, it wouldn’t have felt that out of place. (Both films are partial adaptations of “The Snow Queen,” but boy does The Huntsman feel more just like a darker Frozen.)

Chris Hemsworth and Jessica Chastain do much of the heavy lifting. Both put on Scottish accents, both are more than competent in the action scenes, and there’s a bit of a spark between them, chemistry-wise. Hemsworth jokes around, while Chastain wears gloom on her face like it’s going out of style. Rob Brydon, Nick Frost, Alexandra Roach, and Sheridan Smith all play dwarves, and are varying levels of funny. The biggest surprise comes in the form of the film’s narrator, Liam Neeson. I feel like that should have been a bigger selling point, but he’s uncredited – likely to avoid being used in any promotional material. I wouldn’t want my name associated with The Huntsman, either, if I was him.

The Huntsman: Winter’s War is the prequel/sequel you didn’t think you wanted, and it turns out that you were right. We didn’t need to explore any more of this universe or catch up with any of these characters. It’s another bland movie set in a generic world that’s populated by largely uninteresting characters. It’s better than its predecessor only because it has a sense of humor, and because the climax isn’t altogether terrible – although it’s had very misleading marketing. It’s as generic as a fantasy movie can get, but it passes the time, I guess.

Bottom Line: A slight improvement over its predecessor, if only because it doesn’t wallow in misery, The Huntsman: Winter’s War still isn’t a good movie.

Recommendation: If, for some reason, you like this universe, check out The Huntsman: Winter’s War. If you want to see queen warfare, though, you’ll leave disappointed.