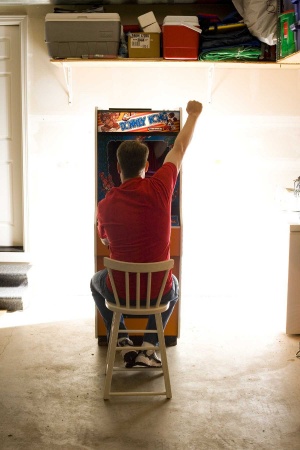 You wouldn’t think a documentary about the rivalry between two arcade competitors would garner much critical acclaim, especially when the game in question was released more than a quarter century ago. But The King of Kong: a Fistful of Quarters has been raking in near-universal praise since its premier at the Slamdance Film Festival last January.

Since the film’s modest five-theater release last month it has expanded its showings to 58 screens, with more opening in the coming weeks. The Village Voice called it a “miniature masterpiece,” the Los Angeles Times described it as “compulsively watchable, ” and Ebert and Roeper proclaimed it worthy of an Oscar nomination. Such high praise has earned The King of Kong an aggregate score of 83 at Metacritic, and a Rotten Tomatoes score of 98. All this over a movie about two middle-aged guys determined to best each other’s Donkey Kong scores. What gives?

The King of Kong‘s director, Seth Gordon, takes pains to highlight Donkey Kong‘s early-’80s domination of the arcade scene, as well as the game’s notorious difficulty. He doesn’t, however, chronicle the near-total decline of the North American arcade since then, or note that Donkey Kong‘s status in the modern gaming world is that of a low-resolution relic, appreciated mostly for nostalgia and historical value. And Gordon doesn’t really have to, because the film’s events speak for themselves.

The King of Kong‘s modern-day arcade locations are mere shadows of the vibrant venues of the ’80s. Even major competitions are sparsely attended, with world record high scores earning the attention of a scant handful of hardcore enthusiasts. From the outset of the film it’s apparent that modern competitive arcade gaming isn’t even on the rest of the world’s radar. But ultimately The King of Kong isn’t a movie about Donkey Kong, or arcades, or even videogames in general. It’s a movie about ambition and corruption, with its conflict framed in epic terms and its heroes and villains perfectly cast. And it’s absolutely fantastic.

The film’s protagonist is Steve Wiebe: family man, high school science teacher and all-around nice guy. Wiebe is carefully introduced in a series of endearing vignettes that portray him as a talented and driven individual who just can’t seem to get a break. He’s the high school sports star who choked under pressure during the championship game, the talented musician who never made it big and the loyal employee who got laid off anyway. Humble, amicable and just slightly pathetic, he makes an ideal underdog. 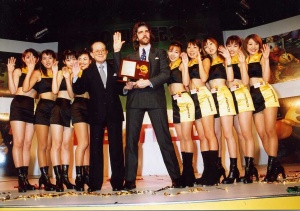 We’re told that in 2002, Wiebe, in the midst of a career change, developed an almost inexplicable yearning to best the Donkey Kong world high score. He purchased an arcade cabinet that took up permanent residence in his garage. For Wiebe, the world record goal became central to his identity. It was his chance to finally overcome a lifetime of near successes.

Wiebe set his sights on the score set by longtime record-holder and consummate arcade champion Billy Mitchell. Mitchell, a semi-celebrity and fixture in the competitive gaming scene since the glory days of the arcades, is a striking figure. With his unflagging confidence, confrontational delivery and meticulously styled mullet parted down the middle, he’s the polar opposite of mild-mannered Wiebe.

As the story of the gamers’ rivalry unfolds Mitchell evolves from a cocky but likeable cult hero to a devious mastermind, determined to preserve his Donkey Kong lead at all costs. He’s surrounded by a ragtag band of adoring oddballs, including veteran gaming record-keeper and Twin Galaxies founder Walter Day. The cool, calculating Mitchell seems to have the scoring establishment in the palm of his hand. Meanwhile, Wiebe gets the cold shoulder from the community as he struggles for support and recognition.

Gordon gently exploits his subjects’ eccentricities, laying them bare in a manner reminiscent of a Christopher Guest mockumentary. Alternately painful and hilarious, The King of Kong is a fascinating portrait of the vintage arcade competition community. But it’s also a remarkable tale of old-fashioned good and evil, with Wiebe cast as the simple, virtuous hero and Mitchell as his Machiavellian counterpart. The race for the high score, as foolish as it may be, becomes an inexplicably compelling personal drama that is at times genuinely heartbreaking. 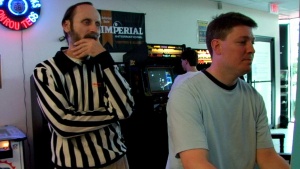 The film’s attempts to pigeonhole its characters are sometimes laughably obvious, and in the final analysis there’s absolutely no question that the director’s loyalties lie with Wiebe. Earlier this year, Mitchell and his supporters contested many of the film’s portrayals, providing detailed interviews and documentation to MTV News‘ Steven Totillo. Totillo’s story on the subject certainly raises questions about the fairness of the film’s conclusions, as do interviews with other documentary participants like competitor and longtime Mitchell associate Steve Sanders.

It’s easy to see how the film’s creators may have fallen under the spell of their own story, especially given the strength of its characters. The King of Kong may be an carefully crafted polemic, but it is no less entertaining for its manipulation of the truth. It’s brilliant, engaging, and unique, it’s worthy of every ounce of the praise – and controversy -it continues to generate.