Fear, noun: an unpleasant emotion caused by the belief that someone or something is dangerous, likely to cause pain, or a threat.

Fear has a definition. But, is it truly possible to accurately define a feeling? Much like trying to describe “green” to a person who has never known the gift of sight, attempting to put words to an emotion never seems to do said emotion any justice. But, back to fear. “Unpleasant” seems too weak a word to describe a sentiment with such a huge spectrum of intensity. A person is capable of being incapacitated by fear – surely, that is far beyond “unpleasant,” right? Perhaps fear truly does come in layers.

When I requested a review copy for upcoming psychological survival horror title Layers of Fear, I was expecting… well, a review key. What I received was… well, a review key. But also the most intense, morbid, and downright frightening press kit that I have ever seen. Typically, a press kit comes digitally and includes information about the game – developer and publisher details, links to assets, embargo information, and occasionally requests not to write about specific in-game spoilers. Very rarely is a literal kit sent, and even more rarely does it immediately elevate my expectations of a particular game.

I have yet to play this game, so it is possible that very mild story spoilers are included in the rest of this article. However, I also doubt that the developer would send something that would truly spoil the experience of playing the game. 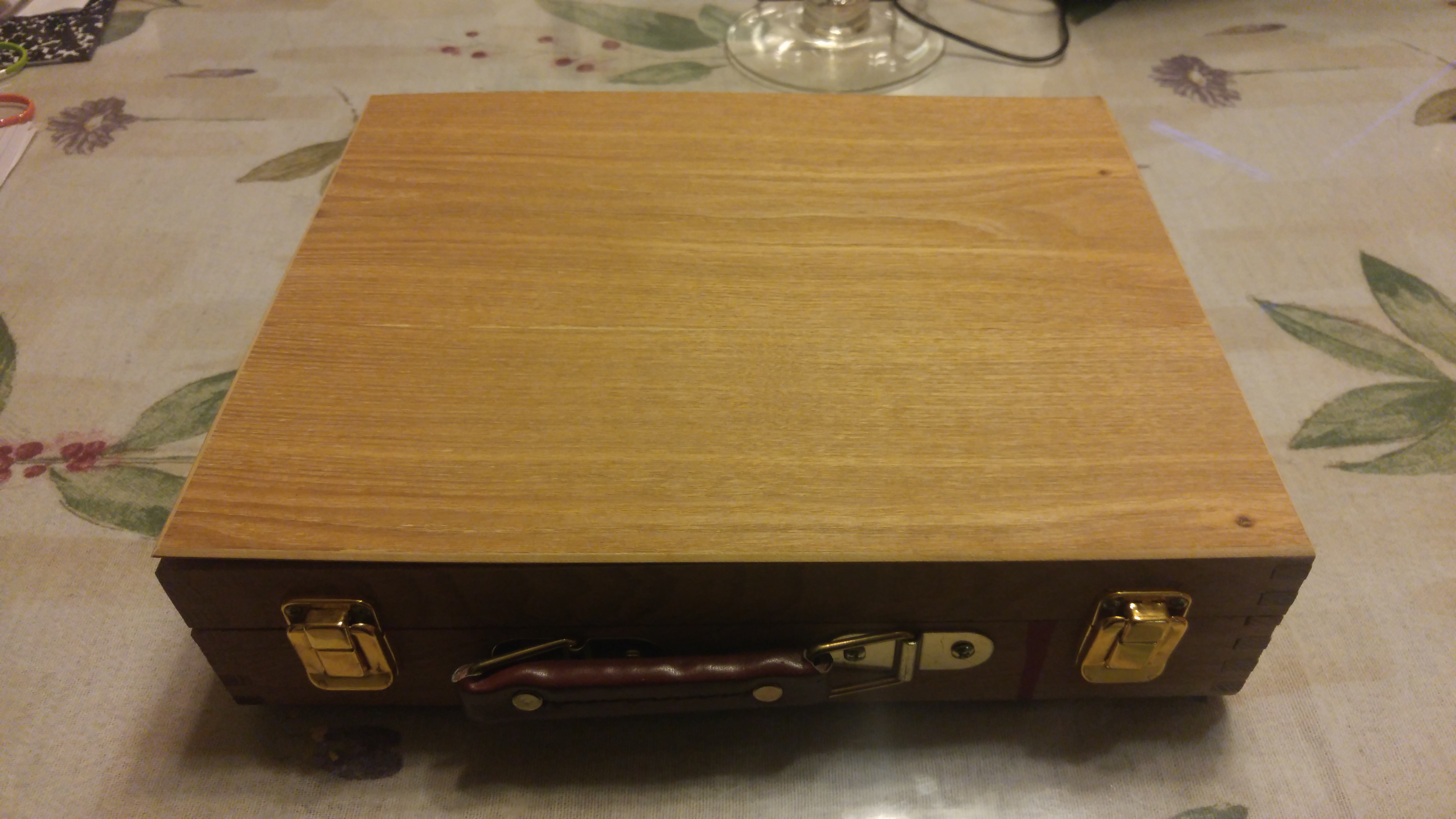 It came in the form of a basic wooden painters kit, with a smear of red paint down the front. “What’s in the box?” I thought to myself, and then laughed at the cheesy joke. I hadn’t ordered anything, and did not recognize the name or address from the package, so I handled the box with caution. 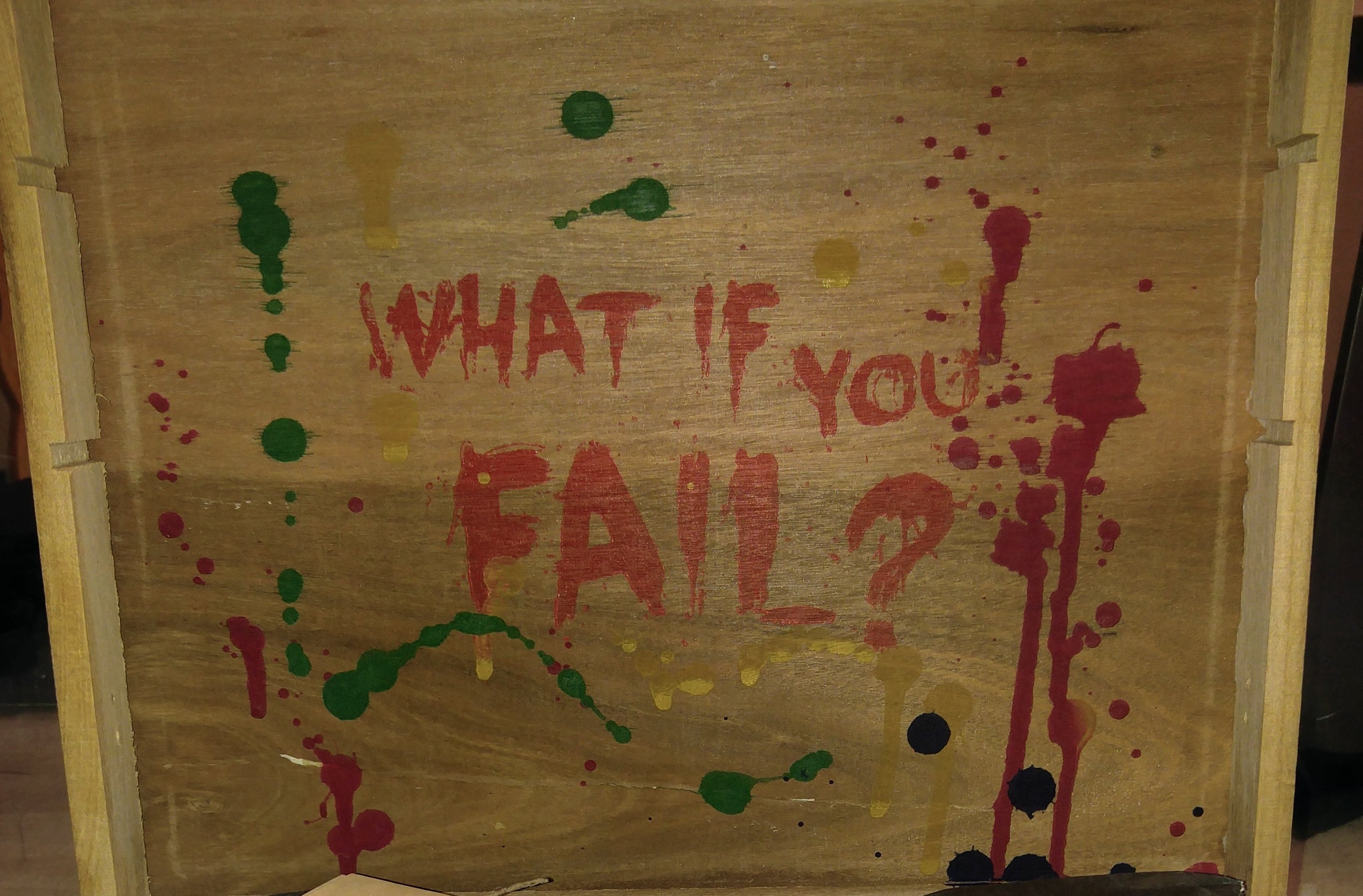 This is the first thing I saw after popping the latches, along with a twine-bound package. A letter sat atop the package, a wax seal featuring the letters LoF. The letter appears to be penned by the game’s central character, with multiple words crossed out, including the signature. 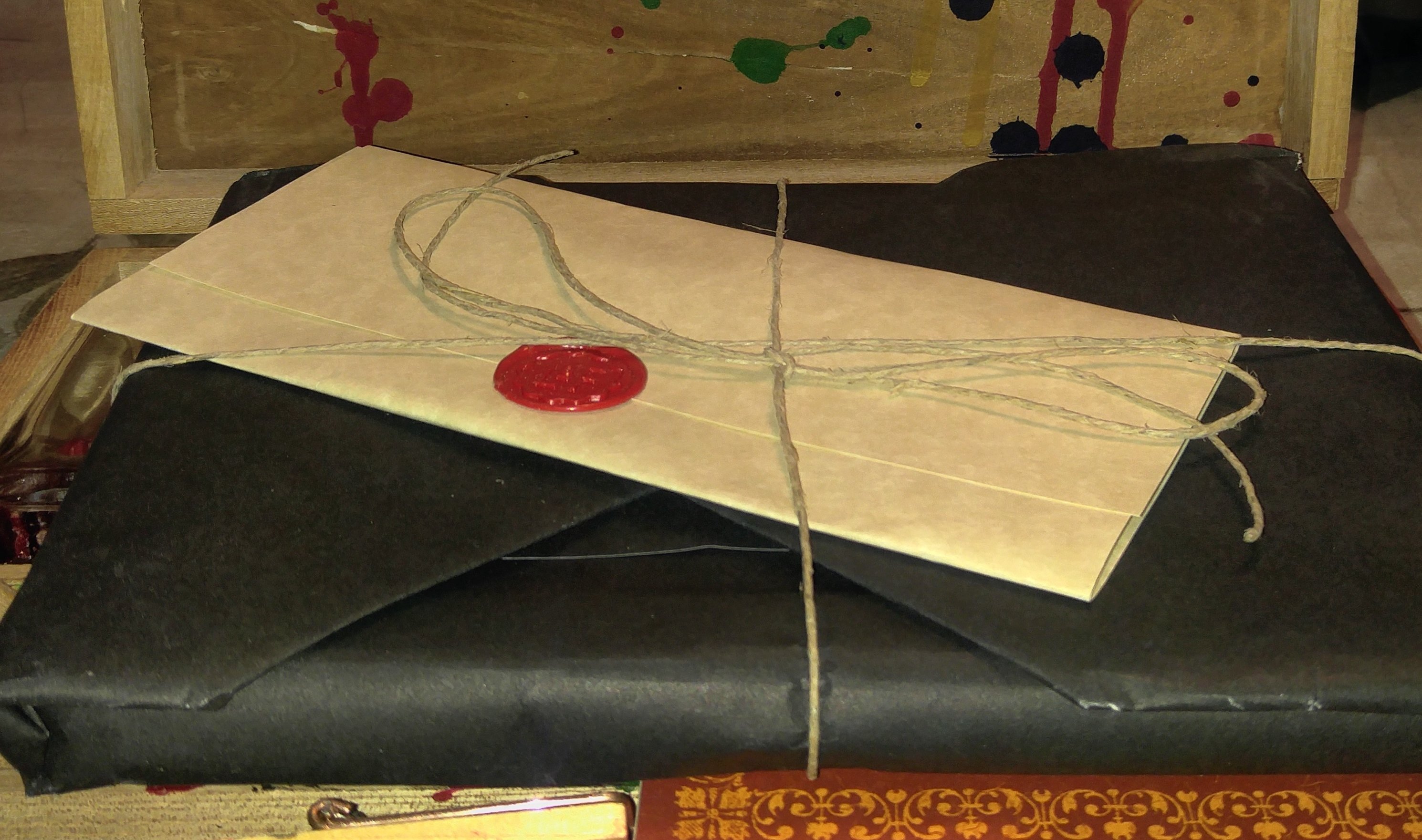 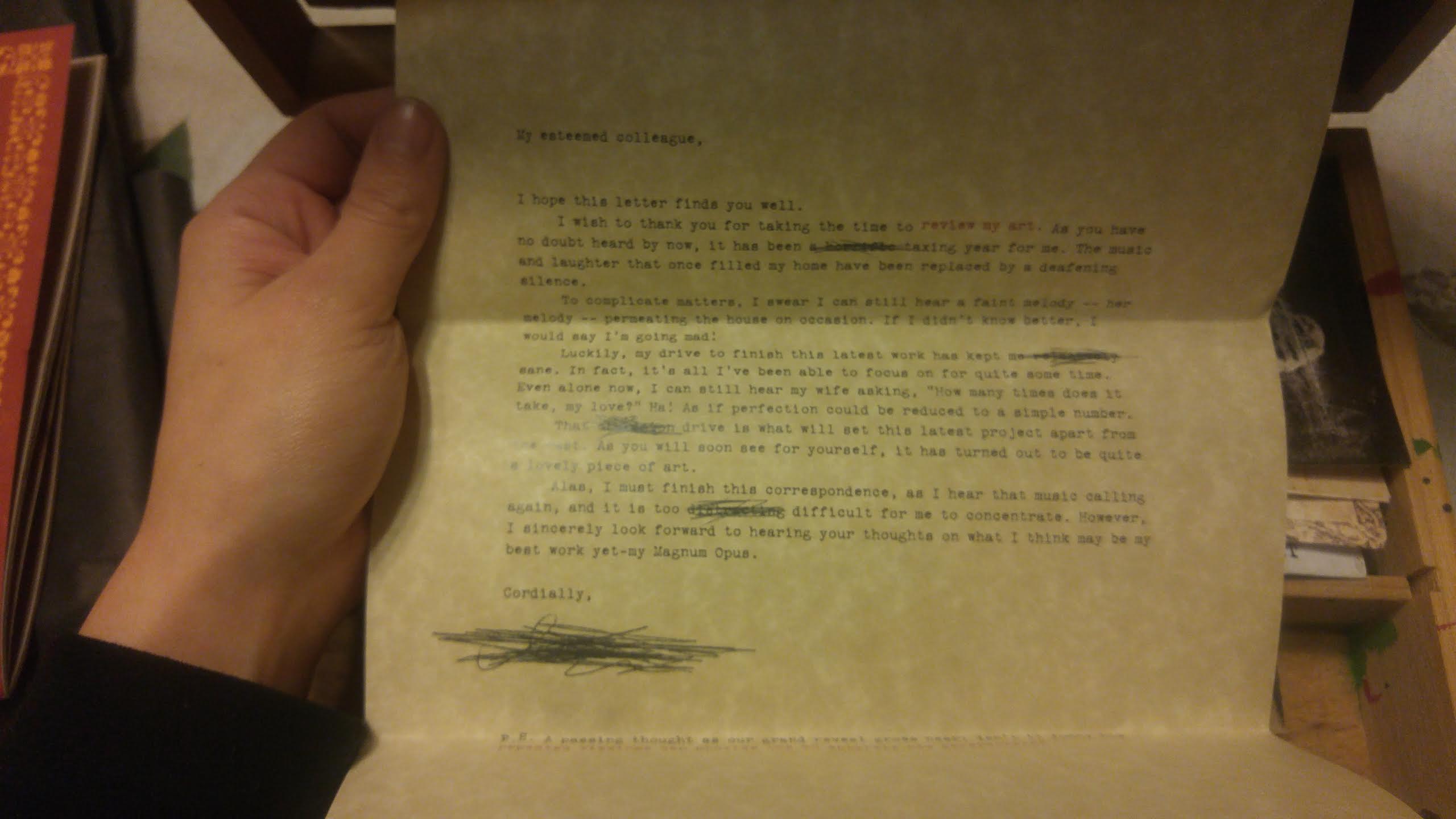 The letter, I discovered soon enough, was in reference to the package. Despite the fact that I was fully aware that this was a press kit for Layers of Fear by this point, I unwrapped it with a level of caution that I still cannot fully explain. Nestled in the paper was a framed portrait, showcasing a morbid duality and wrapped in metaphors that I dare not speculate about. But I had to wonder, what if I fail? 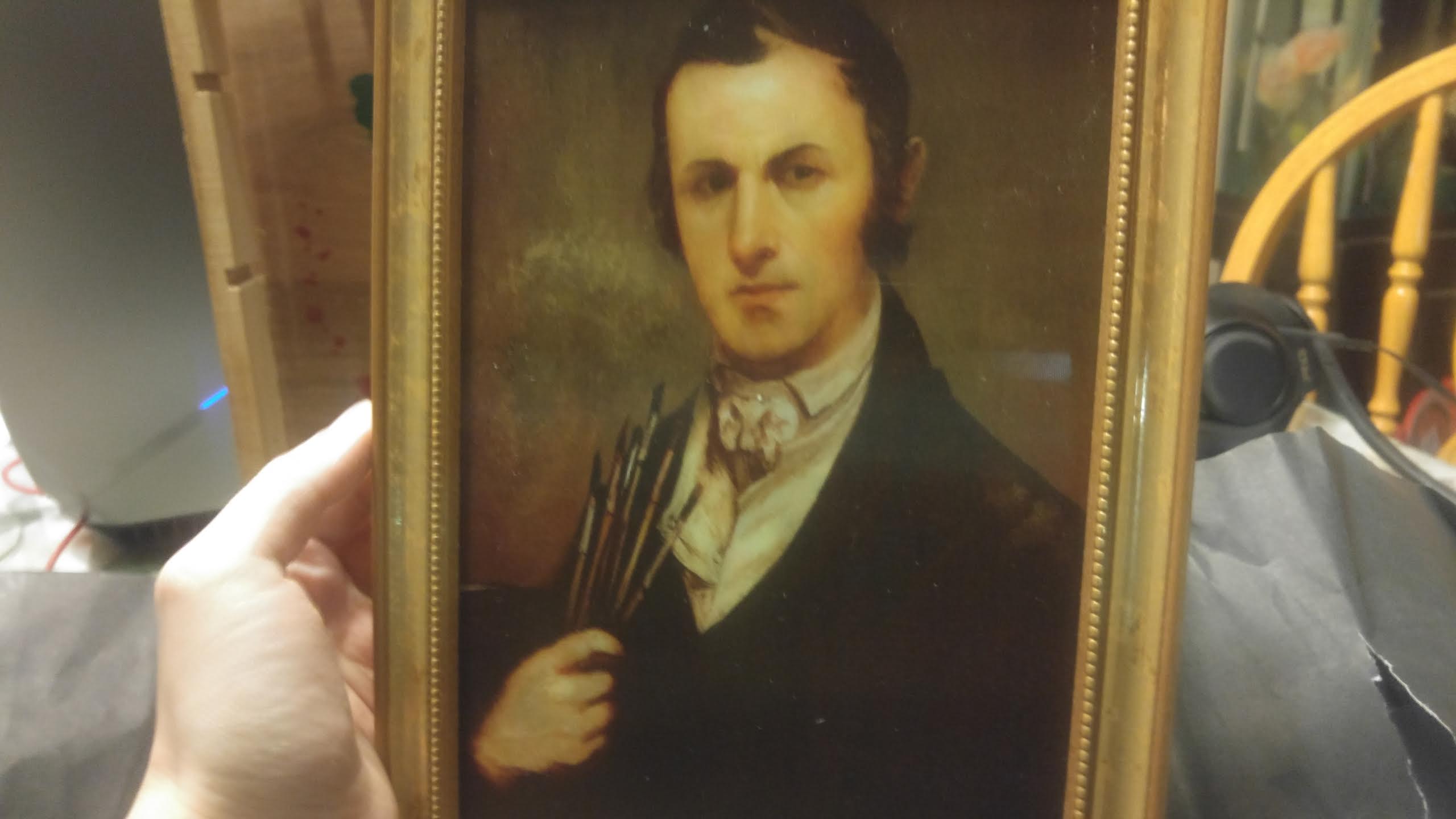 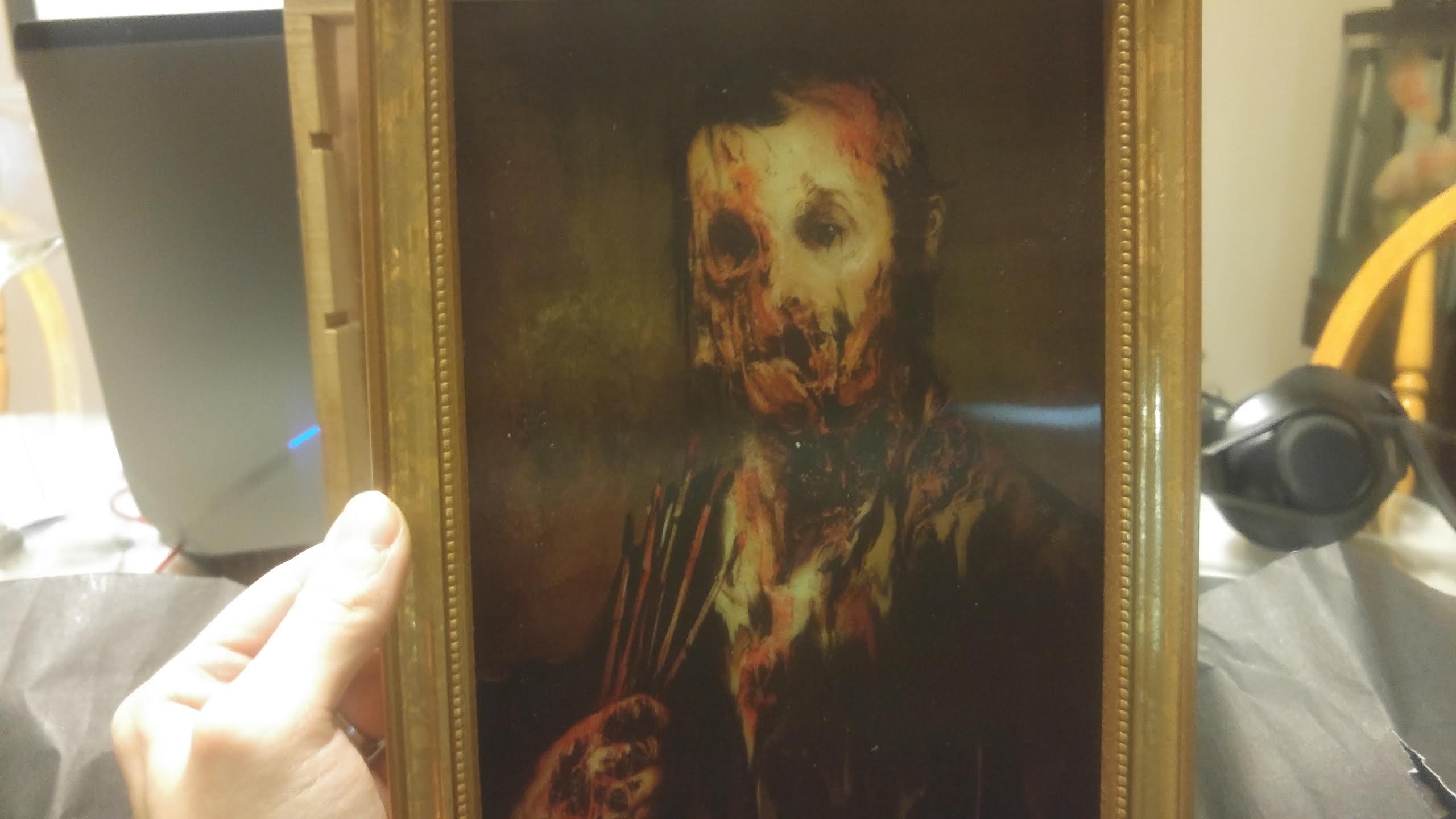 Next up was a book, titled “Children’s Bedtime Stories.” Oh, well, this should be interesting. The book contains three stories: Henrietta the Duck, Little Red Riding Hood, and The Tale of Bobby, Sue, & Gale. Needless to say, this is not a book that I plan on reading to my children. 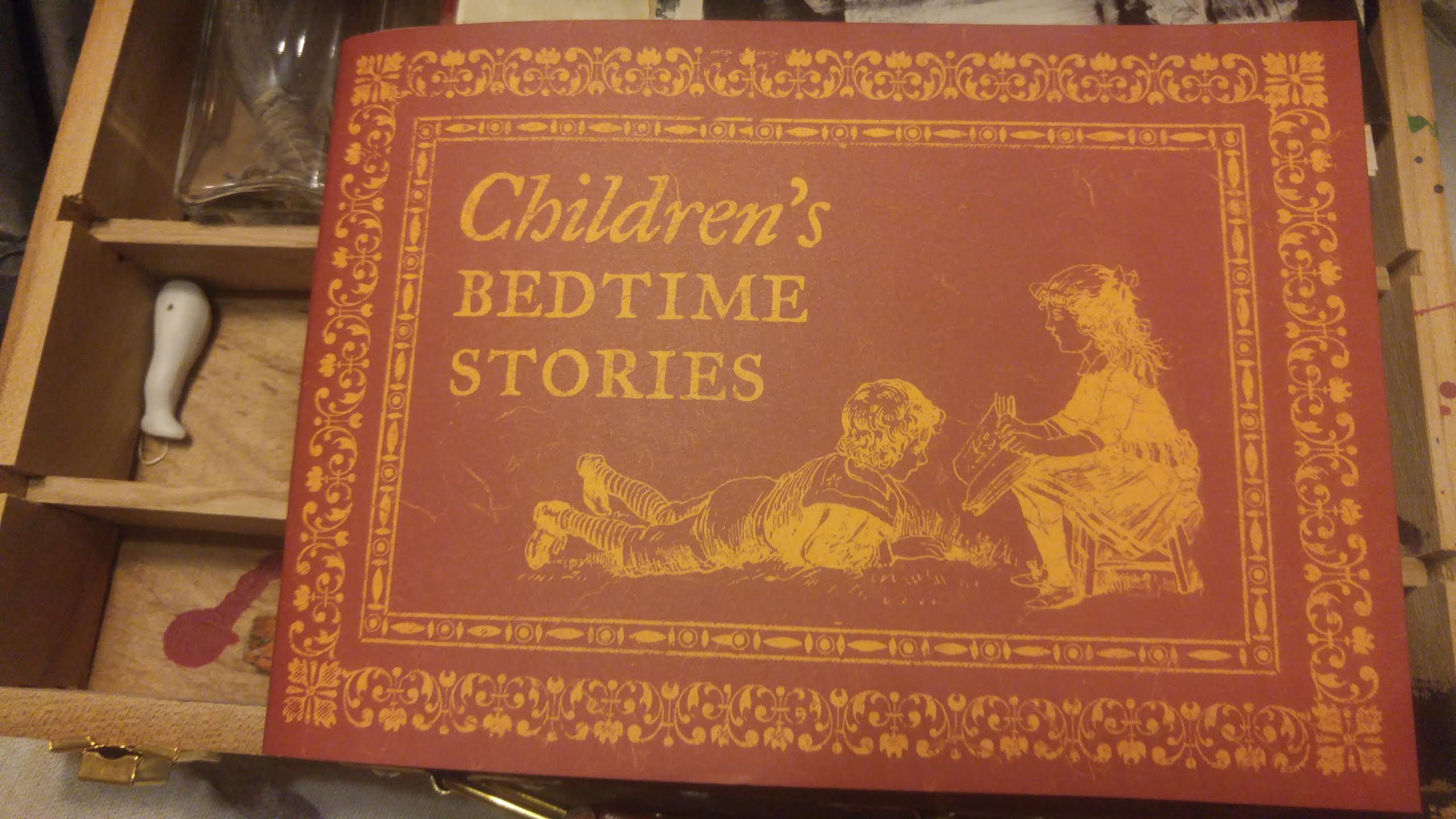 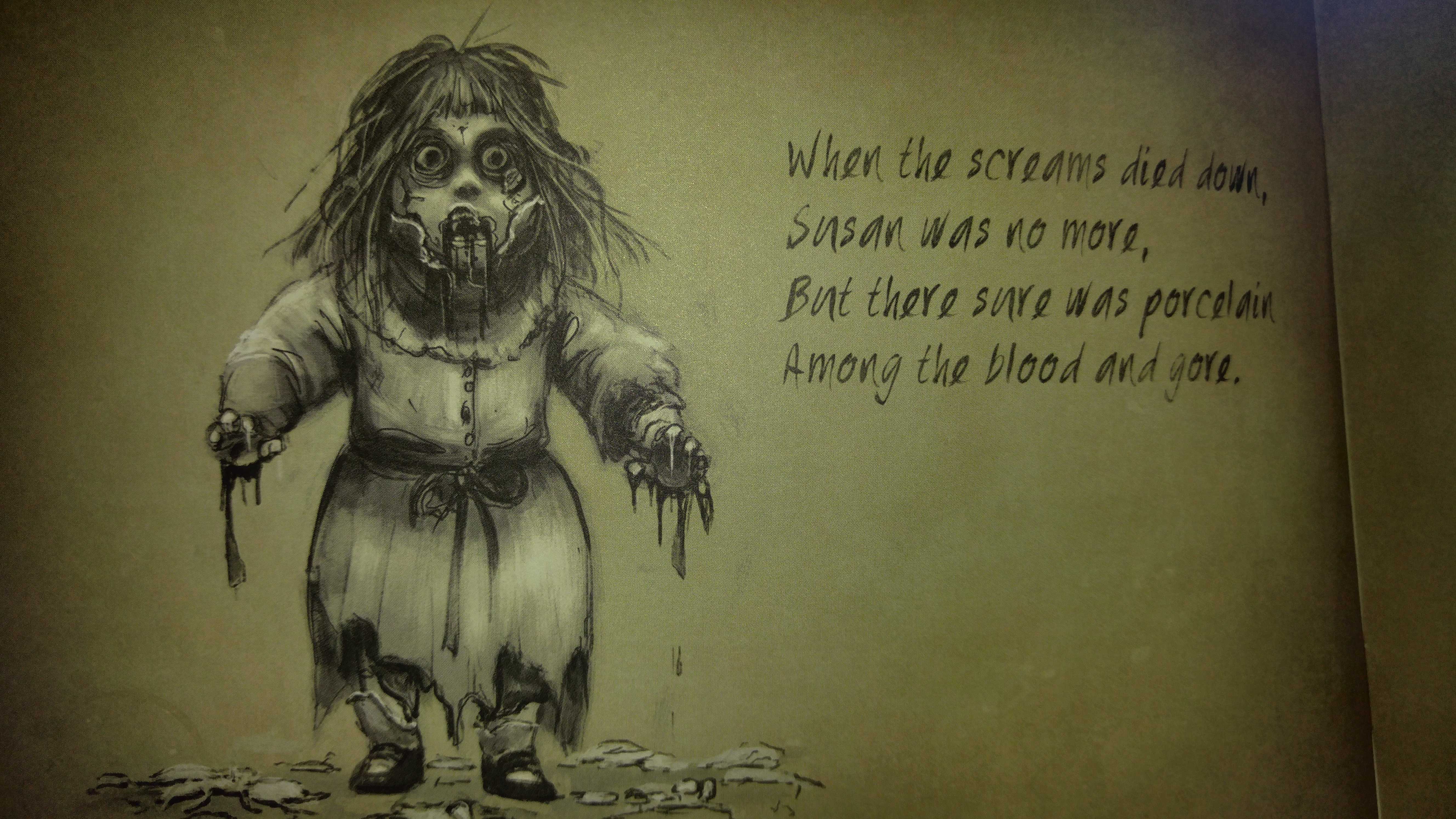 Next in the package were newspaper clippings, appropriately weathered-looking, which paint a picture of the tortured life of a mad artist. Accompanying the clippings were receipts for medicine and a prosthetic below-the-knee leg, along with two mouse traps and a pair of amputated toy legs. 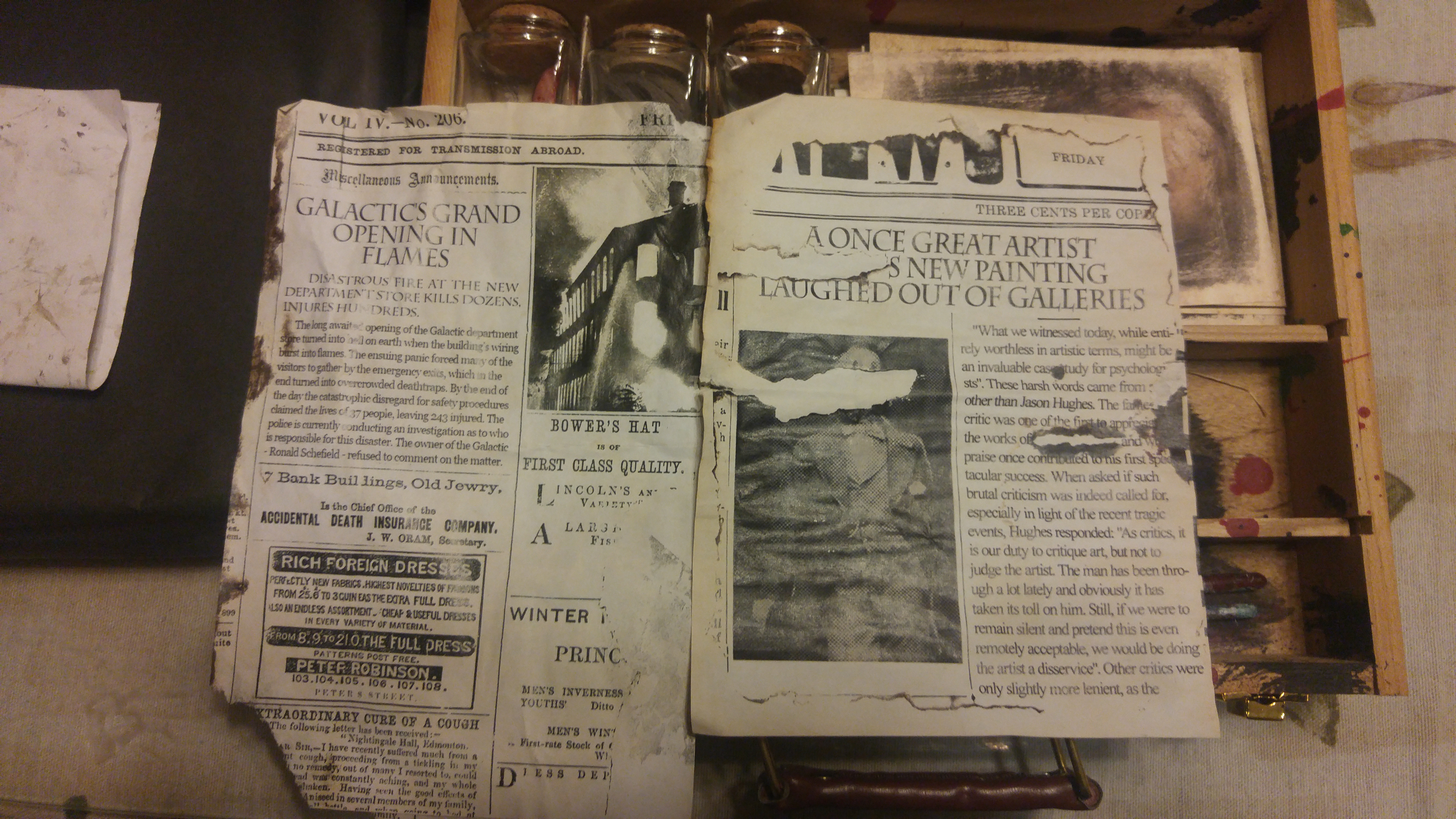 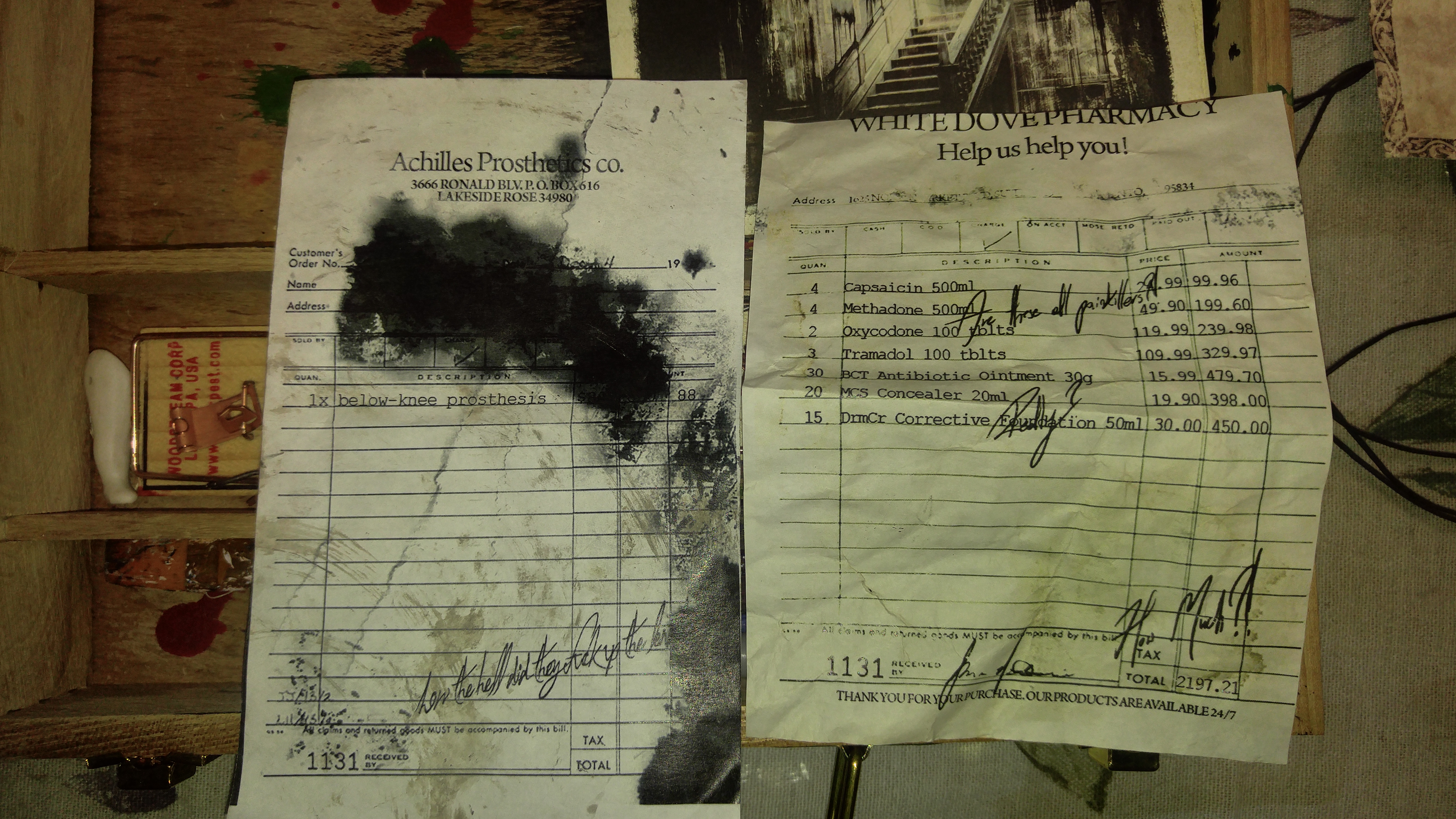 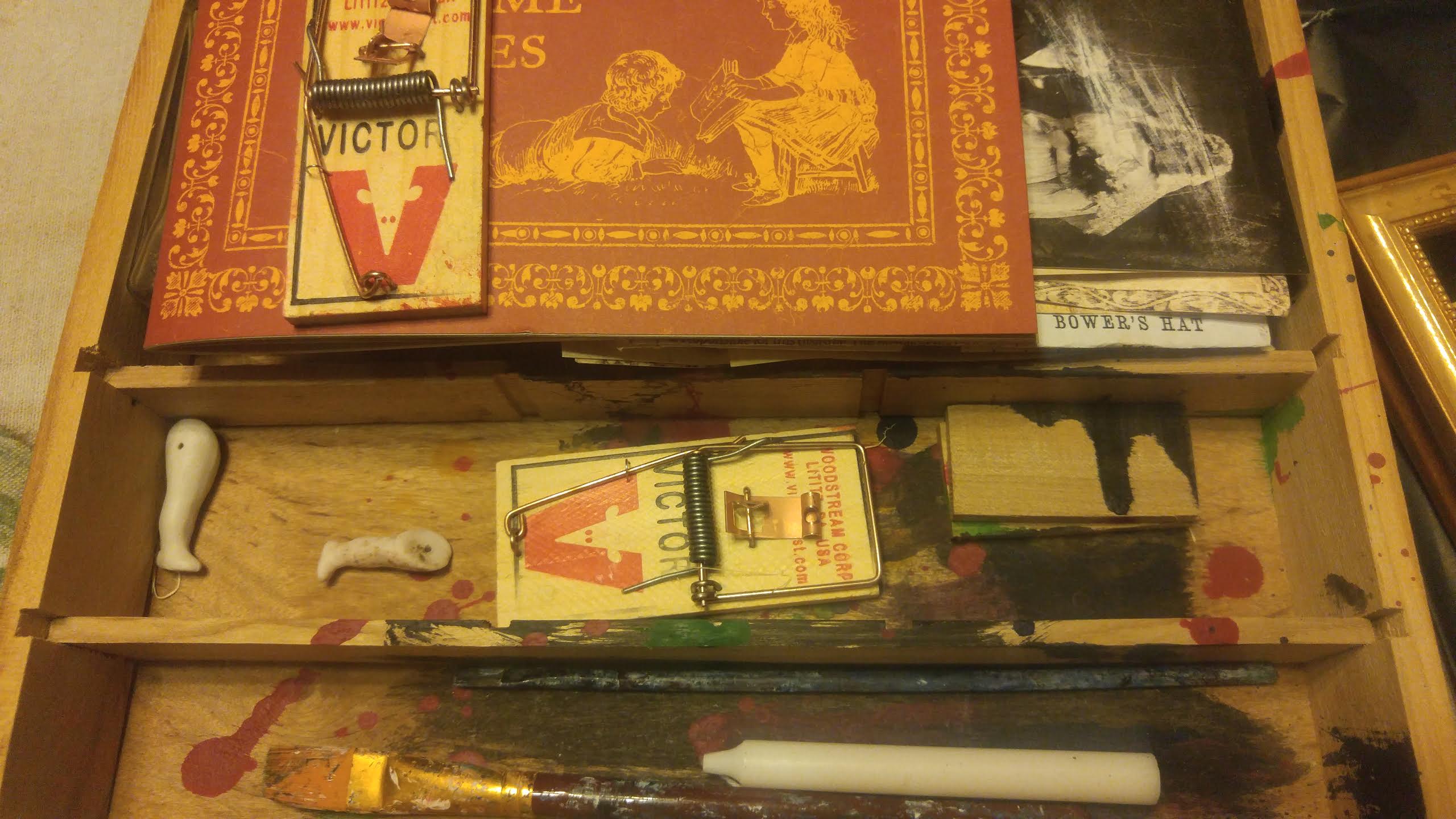 As awesome as all this is, the stars of the kit were the three glass jars, nestled in the bottom of the top right corner. One contained a bloody canvas (or is it skin?) with a razor blade, and the words “Not just any canvas.” The second contained a severed finger, labeled “For final touches,” while the third jar housed a “special brush,” or what appears to be a lock of ashy hair. 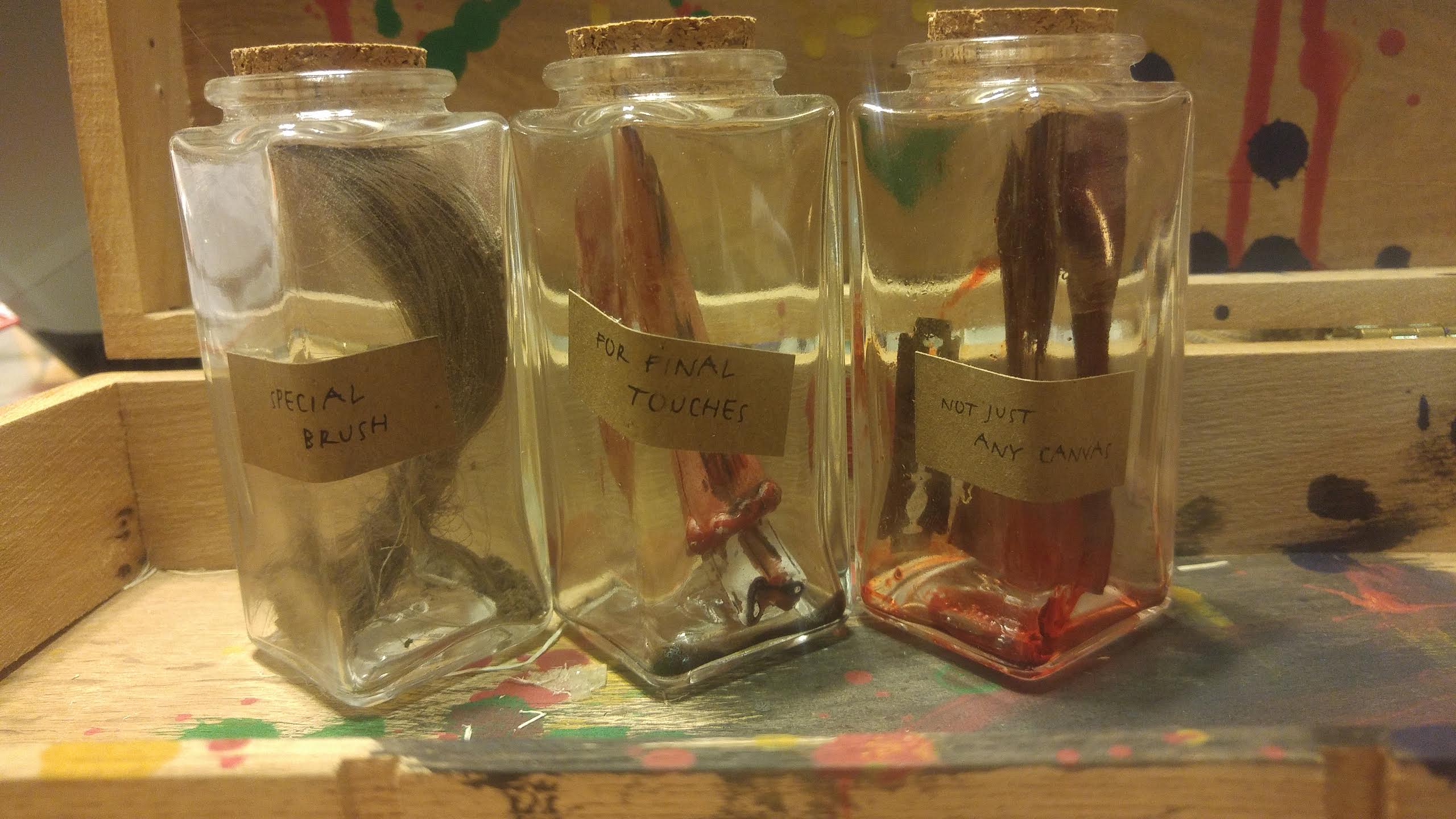 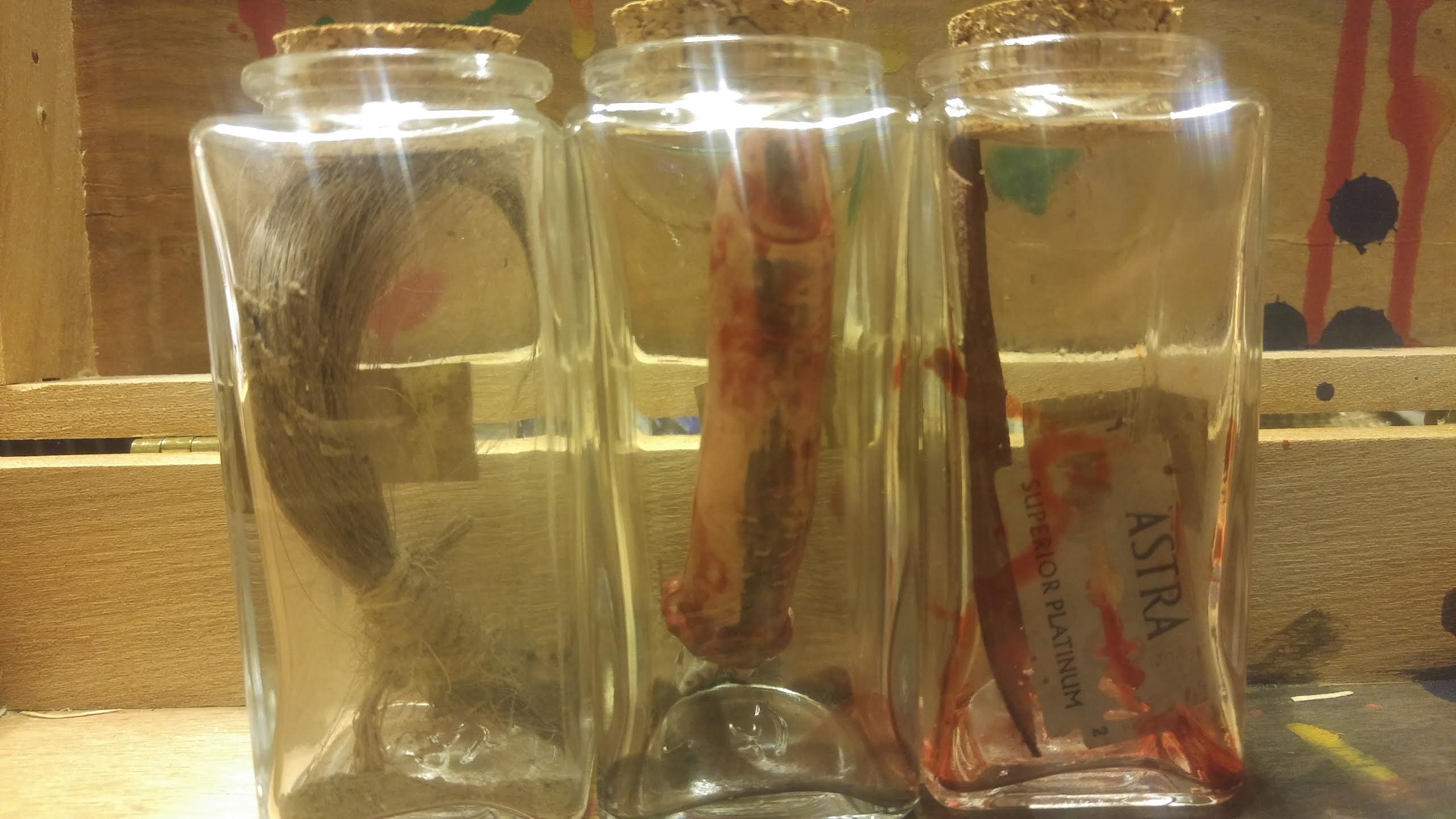 Other items rounding out the kit include a child-like doodle, dried up paintbrushes, the business card for a relationship counselor, a single white candle, and a batch of terrifying pictures. 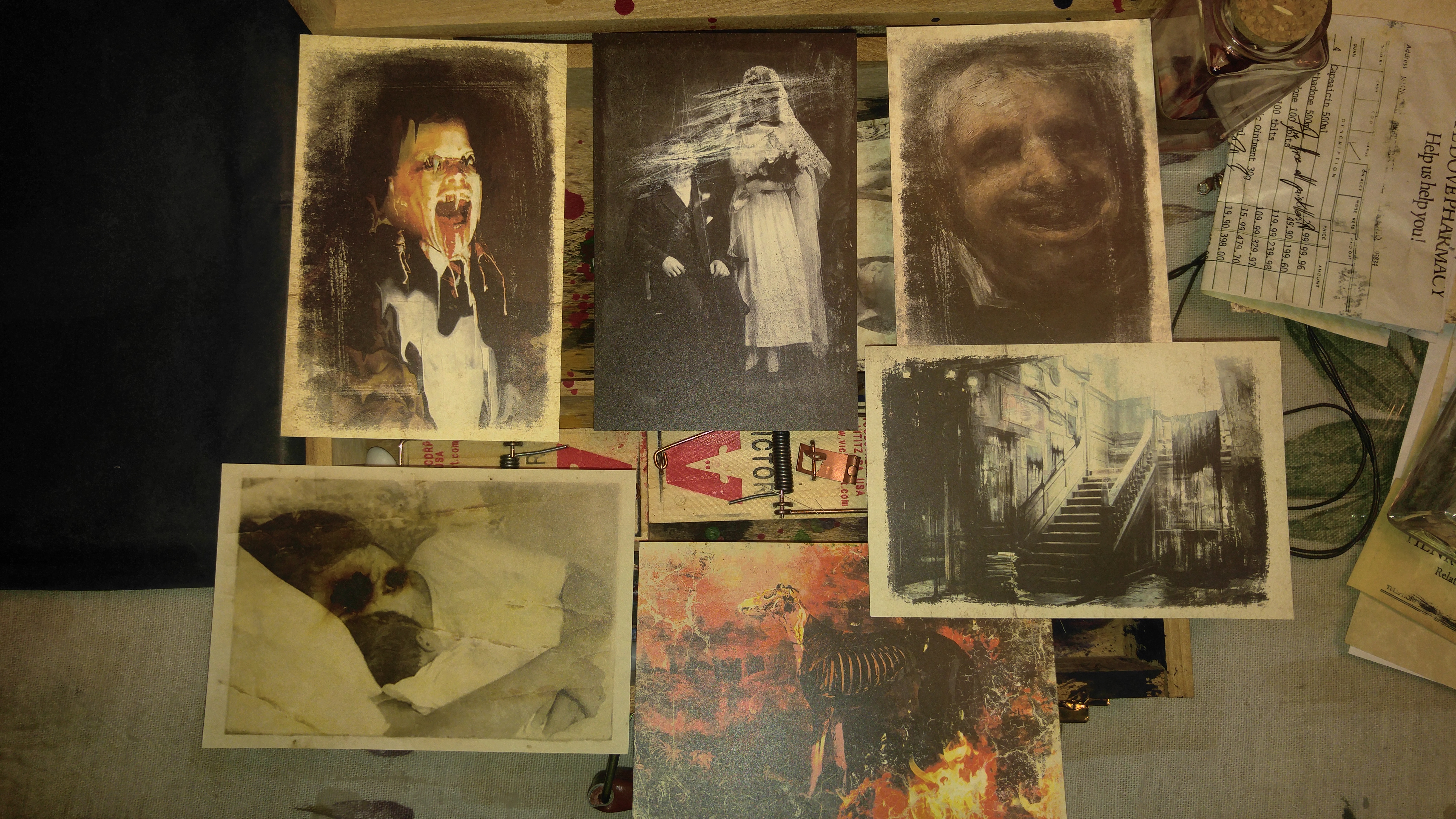 As I’m sure you can guess, I was left with plenty of fuel for my nightmares. However, I also now have significantly higher expectations of the game than I had prior to receiving the box. Stay tuned for The Escapist‘s review, as well as my opinion on Layers of Fear.