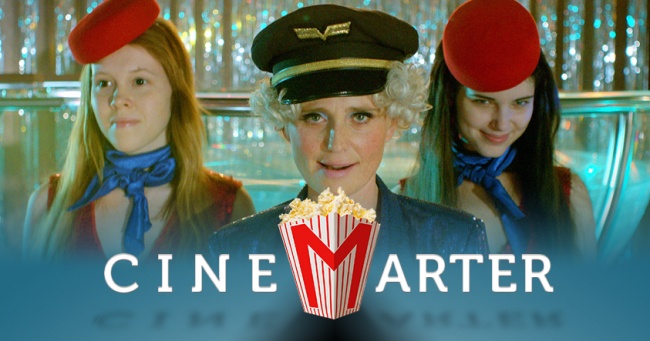 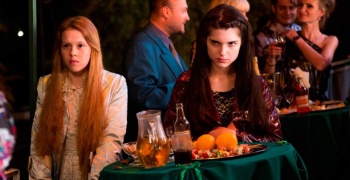 The Lure is a movie that you can show a person who says that all movies nowadays are the same. Sure, it comes from Poland, and it might be the only movie from Poland that person will ever wind up seeing – people with that sort of attitude usually only see whatever is new at the multiplex anyway – but at least you can walk away with a smile on your face. Also, you’ll have introduced someone to a glam-rock mermaid horror movie. So, you know, we all win.

Hopefully, “glam-rock mermaid horror movie” has gotten you intrigued enough to learn all about The Lure. The film follows to mermaids, Golden and Silver (Michalina Olszanska and Marta Mazurek), who wind up in Poland, are recruited by a night club to be part of a featured musical act, and wind up staying a lot longer than anticipated. Their initial plan was for Poland to be a pit stop on the way to America, but things take a turn when they find themselves really enjoying the nightclub life, and forming relationships with the other workers. Also: sometimes they wind up eating people.

There isn’t really a whole lot to The Lure when it comes to plot – and much of what is there doesn’t make a great deal of sense. The key story threads see Silver fall in love with a guitarist (Jakub Gierszal), and Golden starts exploring a darker, more rebellious side. We also get to learn about mermaid lore, which helps the film eventually function as a metaphorical life lesson and give its plot a convenient place to end.

For instance, did you know that if a mermaid falls in love with a human, and the human winds up marrying someone else, the mermaid has until daybreak after the wedding to eat him or she turns into sea foam? Me, neither! Guess what the climax entails! Or, how about this: if a mermaid cuts off her tail, she loses her voice. The life lesson comes from the mermaid in question undergoing some pretty extensive changes in order to make someone else love her – only for them to backfire. Here’s your lesson: Don’t make significant changes in hopes that you’ll make someone love you. I mean, sure, it’s another Little Mermaid, but it’s neat nonetheless.

After seeing The Lure, I felt like I wanted to do two things: (1) see it again and (2) tell everyone else to see it.

The musical numbers, which take up what I would guess to be about half of the film’s running time, are a good deal of fun. They get to go through various genres – although the main focus is on the ’80s glam/punk rock scene. There’s some pop and some more somber songs scattered throughout, too, and all of it sounds great. Everyone can sing, and you find yourself tapping along.

Not all of it is fun, though, as the film does a better job than one might expect of characterizing its mermaids. It’s not all fun and games for Golden and Silver as they try to discover exactly who they are. There’s a coming-of-age element to The Lure – these are young mermaids who haven’t exactly gotten to find themselves in this society, and the film lets them explore the highs and lows to their characters. One of the best scenes is a solo song about loneliness. Tonally the film is all over the place – but it kind of fits, in a weird way.

And let’s not ignore the effects used to create the mermaids. We get to see them both in “human” form – they look like women but from the waist down look like Barbie dolls – and in “mermaid” form, where they get tails and spiked teeth. The Barbiefication isn’t something we see a lot but was done seamlessly, and what we see of the tail and the teeth is just as good. It’s not an effects-heavy film, but it doesn’t exactly shy away from them, either – and they’re pretty wonderful.

You probably didn’t know you wanted The Lure. I didn’t know I wanted The Lure. But after seeing The Lure, I felt like I wanted to do two things: (1) see it again and (2) tell everyone else to see it. It didn’t get a wide release, but hopefully it will find home video relatively soon. It’s a very weird rock concert/mermaid fairy tale/horror movie combo – raw and unpolished by never boring, always stylish, and very engaging. It’s better than any movie with its premise had to be – it has strong characters, more interesting musical numbers, and great special effects – and is something that I hope you seek out when it becomes available.

Bottom Line: A weird and raw movie that’s unlike almost any other, The Lure is a fascinating experience.

Recommendation: The Lure probably isn’t playing anywhere near you right now, but make a mental note to watch it when it hits home video. You’ll be glad you did.