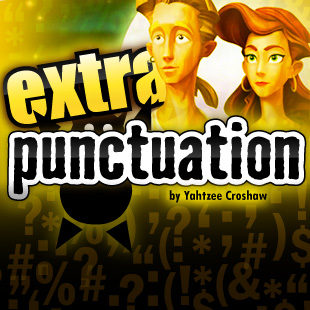 As anyone who views my Wikipedia page will know, adventure games and I have a history. I was practically raised by them, like Tarzan by the apes, and was only brought to civilization in my late teens to be taught how to stop stealing random useless objects and communicating only with the phrase “That doesn’t work.” I’ve played a lot of adventure games, made a couple, and so I can tell you that the problem with the present resurgence of adventure games, with the various Telltale properties and Broken Age and all that, is that most of them seem to be afraid to attempt to elevate the adventure game as a concept.

What I mean is, the standard model for your adventure game is that you pick up items, keep them in an inventory, and use them to solve a sequence of puzzles. But that alone results in a mediocre adventure game at best. One in which all there is is a succession of keys to use on doors. They might not always look like keys and doors, but that’s what they are. Items beget items, or at least access to new areas where other items can be found. You get one item, like a sausage, and you use it to distract a dog in order to get a can opener, which you use to open a can and get a light bulb, which you use to light a room so that you can see how to get to the room where you get a sponge, etc.

The very worst adventure games are basically just chains. The challenge is to find where the chain starts – to pick up an item without having to expend another item to do so. Then you use that item to get the next in the chain, and so on to the end. Maybe at some point the player character goes to a new area and loses all their items so the chain starts again. And that’s fine if all you want to do is say that you made an adventure game, in this age where such things are few, but not if you have any ambition to make one that actually compares favourably to the classic titles in the genre.

Because the best puzzles in adventure games are the ones that aren’t just keys in doors. The keys-in-doors chain is like the foundation upon which others things can be built, like story and character and actually clever puzzles.

The Secret of Monkey Island is rightly considered to be one of the greatest adventure games of all time. One of the most noteworthy puzzles is the ‘beating the Sword Master’ sequence. At its base, it starts with an inventory puzzle: you have to buy a sword, and then use the sword on the men. But the important part is that victory depends on voicing effective insults, and giving the correct comebacks to insults directed at you. That means wandering around the island, challenging randoms, building your repertoire of insults and collecting their responses. At the end of all that, you challenge the Sword Master, who uses a wholly different library of insults. But here’s the clever part: each one can be countered with one of the existing insult responses.

See, the inventory puzzle at the heart – get sword, use sword – is just the bare patch of poured concrete upon which the brick building of the experience is built. It’s a smart puzzle that ends with a raw challenge to the player’s wit and intellectual problem-solving skills that can’t be solved by randomly clicking on things until the game gives in. It also riffs cleverly on sword fighting as it was depicted in your Errol Flynn-style classic adventure films, where the animated fencing was secondary to the banter exchanged between hero and villain over locked blades. Not only that, but it’s also an opportunity to appreciate some very solid writing and world building in a way that blends seamlessly with the tone and action. 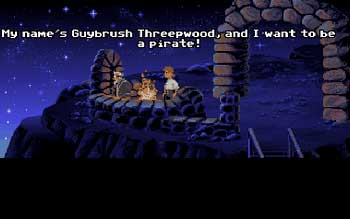 Monkey Island is full of examples where the inventory puzzles are just a basis, not what passes for the meat of the sandwich. Often, dialogue would provide that. There’s another puzzle where you buy a ship with a stolen note of credit, but doing so also requires lengthily haggling the salesman down with colourful discussions of the ship’s features interspersed with lowball offers. You don’t just Use Credit On Man and be on your merry way.

I look at people chucking out adventure games these days that do little more than string a few inventory puzzles together, call it a day, and then announce that they have done their bit for the preservation of a classic genre, and I despair. It’s like watching someone chuck a brick out of the window of a moving car and announce they’ve done their bit for the construction industry.

Another interesting example is Loom, one of LucasArts’ earliest adventure games. The thing most worth noting about it was that it had no inventory at all. You solved the puzzles by playing specific songs from your distaff to alter the fabric of reality, or – and this was the clever part – you could also play songs backwards to reverse their usual effect. Admittedly, though, Loom was less about the puzzles and more about creating a strange, mystical world through which the main character journeys, learning the significance of his power and his origins.

Come to think of it, of all the classic adventure games, Loom was probably the one that played the most like the modern adventure game, in that progression was fairly linear and you only had one button to generically ‘interact’ with objects in the world. And that’s another problem, I think – adventure games that had big verb lists, allowing such diverse activities as both Pushing and Pulling, allowed the player to explore myriads of possibilities for every object they found, providing opportunities for more complex puzzling. Think of, say, the puzzle in Day of the Tentacle where you have to push an old lady down a flight of stairs. It was also possible to talk to the old lady first to understand why this measure was necessary.

Couldn’t do that in your modern adventure game, could you, where you’re lucky to have one click for ‘interact’ and another for ‘examine’. There is only one thing you can do to every object in the world. They represent an eggshell-thin layer of complexity over a vast emptiness. How would you have done such a puzzle in a modern adventure game? The first click has you converse with the old lady, and the second pushes her down the stairs? But this removes all conscious agency on my part from the decision to push the old lady down the stairs. At no point did I specify such a thing. That old lady’s broken hip is on your hands alone, game. How am I supposed to get hard?