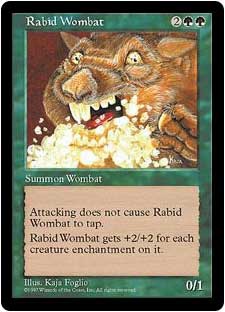 If I had to describe Saturday’s tournament in one word, I would have to go with “humbling.” We had an amazing time with The Escapist crew that turned out for the event, but I didn’t fare too well in my matches. I played against three UR (Blue/Red) decks featuring many, many Snapcaster Mages. They all looked something like this. I lost three consecutive matches and we called it a day. I hadn’t prepared for UR at all. I knew it existed, but it wasn’t really on my radar like Aggro decks were, so I didn’t have a game plan to combat it. This is the perfect segue into this week’s topic, the metagame.

When it comes to playing Magic, nothing exists in a vacuum. You can’t know how good your deck is just by solitaire testing, and it always comes down to how you fare against other decks. What other decks, though? This is where the metagame comes in.

Whether you’re looking at the tournament scene, Magic: the Gathering Online, or just your own playgroup, the various types of decks that other people are playing comprise your metagame. In short, your metagame is the deck types you might expect to see at your next Magic session. My local metagame is wildly diverse. Some players don’t have much by way of newer sets, having fairly vintage collections of cards. One Aura deck uses Rabid Wombat to great effect, and another Land Destruction deck utilizes cards from throughout Magic history. Simply by being decks that I play against frequently, though, these are both part of my local metagame. Myr is another deck that exists in my meta, where creature-based mana ramping leads to a 4th turn Myr Battlesphere.

Suffice to say, my local metagame doesn’t have too much in common with the competitive Standard meta. The closest tie I’ve found is Illusions, which I’ll get to later. When every player is wielding a half dozen decks or more, though, it can be very useful to lump them together based on common themes so you don’t end up trying to account for 20 disparate decks when you’re preparing for your next Magic games.

Of course there are many ways to do this, but the simplest groups decks into three categories: Aggro, Combo, and Control. In the article, these are described as follows:

Aggro is a strategy that aims to win by producing maximum damage output in the shortest number of turns. This strategy often places a heavy emphasis on using creatures as efficient damage sources. Aggro strategies can be slow and relentless or fast and ruthless, in both cases attempting to overwhelm the opponent’s defenses and reduce them to 0 life.

Control is a strategy that attempts to interfere with, prevent, deny, or otherwise cancel the opponent’s actions. It attempts to establish a superior board position and then use that position to win.

Combo is a strategy that utilizes the interaction of two or more cards (a “combination”) at the same time or in sequence, resulting in a powerful effect. This strategy can also refer to using a single powerful spell to instantly win the game while the rest of the deck is designed to ensure its success. Many decks have smaller, combo-like interactions between their cards, which is better described as synergy. A good combo should be fast (achievable early enough in the game to matter), consistent (regularly achievable), and powerful (so the effect translates into victory).

Let’s take a look at the decks I’ve already mentioned and see where they fit in here. The Aura deck likes to ride an enchanted Rabid Wombat to victory. This fits nicely as an Aggro deck. As above, it’s not classified as “Combo” because the interaction between Rabid Wombat and Auras is better described as Synergy than as a combo. It aims to be a slower style of Aggro, to be sure, but once they’ve got a wombat in play and a couple of Auras attached, it’s time to beat down the opponent in combat as quickly as possible! 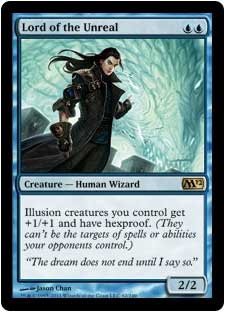 Land Destruction is another great example, as it fits squarely into Control. Your goal is to deny the opponent the mana they require to cast spells, thus allowing you to gain the upper hand by way of a dominant board position. Cards like Faultgrinder allow you to both maintain your land advantage by destroying a land, as well as benefit your board position by providing a 4/4 creature!

Finally, there’s Combo. Of the decks in my meta, and even from what I’ve seen of Standard, there’s not much Combo going on these days. The last true combo deck I recall was before Innistrad with the Splinter Twin deck. This combo looks to use Deceiver Exarch with a Splinter Twin to generate an infinite number of hasted copies of Exarch and then attack for the win.

I mentioned Illusions earlier as being a tie-in between my local metagame and competitive Standard. They had a pretty impressive turnout at the Magic Worlds competition in San Francisco, with over 15% of all registered decks being Illusions. I’ve played a few matches against my local Illusions deck and it can be really tough to beat. The deck utilizes cheap Illusion creatures, such as the Phantasmal Bear and the Illusion Lord, Lord of the Unreal to help offset their weakness of being targeted. This deck is a serious Aggro style, often dropping a 2/2 Bear on turn 1, and pumping him up to a 3/3 Hexproof with the Lord on turn 2.

But then it doesn’t just do Aggro, Illusions also have a Control twist. By including disruption spells such as Mana Leak, and occasionally some end-game finishers like Wurmcoil Engine the deck gets going strong from the start, and can have more staying power than something like Red Deck Wins, a famous mono-red Aggro archetype.

As I mentioned last week, these three Archetypes act like Rock-Paper-Scissors in Magic. Aggro beats Control by getting an early lead on board position and swinging hard and fast early to mid-game. Control beats Combo by disrupting the integral pieces of the deck’s combination. Combo beats Aggro by outracing the Aggro onslaught with their game-winning combination.

Of course in Magic the possibilities are endless, so you can expect to see any number of subtypes and hybrids of these archetypes in the decks you face, such as the blend of Aggro and Control aspects in Illusions. Another great example is the Ramp style deck, which uses spells like Rampant Growth and Birds of Paradise to accelerate mana production, thus giving access to higher powered spells much earlier in the game. Ramp decks can potentially fit into any of the three archetypes, depending on what they aim to do in the long run, though they are most often some hybrid rather than being a pure breed.

As was mentioned in the comments last week, Wolf Run Ramp which uses Primeval Titan and Kessig Wolf Run to power damage through isn’t a very good fit in the role of Aggro. It’s slower than Aggro and it aims to Control the board long enough to stay alive while it’s ramping up to Titan mana. My own casual Ramp deck, Greenihilator, however, isn’t as well rounded. It just wants to drop a creature with Annihilator on turn 3 or 4 and go to town. I don’t think this can be classified as anything but mid-range Aggro.

Finally there is Valakut Ramp, which just cycled out of Standard, and used Valakut, the Molten Pinnacle and Primeval Titan to combo a quick win. The deck used a number of other favorable interactions such as Khalni Heart Expedition to really power out some damage once Valakut was online. I consider this a great example of a Ramp Combo deck which can drop a Turn 4 Titan and Turn 5 lethal damage from Valakut on an ideal draw. Given the prevalence of Ramp decks over the years, they may be worthy to be considered a fourth archetype. Depending on the build, they can fit anywhere into the paper-rock-scissors dynamic pretty well.

What does your meta look like? Is it Aggro-heavy? Control? Or is there a Combo out there that I’ve overlooked and is dominating your day-to-day Magic games?