With every year, San Diego Comic Con grows larger and larger, to the point where even the massive San Diego Convention Center can’t contain even half of everything there is to do over the course of the four day convention.

But that’s also one of the things that I like most about SDCC, because it allows you to do some exploring. To venture out into downtown San Diego, into the Gaslamp District, and be able to find awesome fan experiences that are hidden away from the convention hall. Many of which don’t even require badges!

So in between taking pictures for the various cosplay galleries, I went out and explored the streets of downtown San Diego to find some of the most fun things to do outside of the doors of the Convention Center. 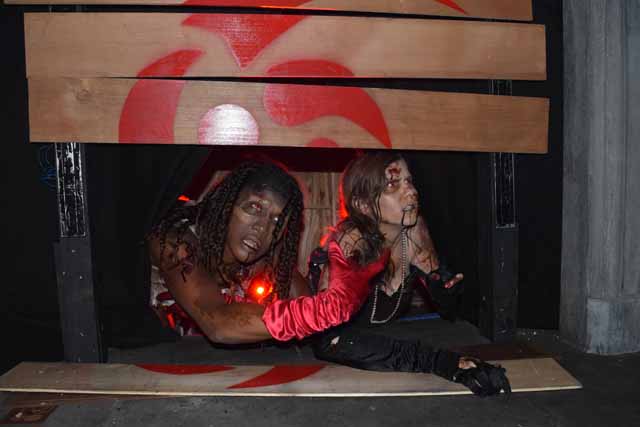 I love escape rooms. People may say that virtual reality is the closest thing to feeling like you’re inside a video game, but a good escape room to me feels like you’re playing a real life version of one of the excellent Zero Escape games. Working together with a team by calling out potential clues, trying to figure out how the clues fit together in order to open some sort safe, all with the eventual goal of trying to get out of locked room.

Which was why I was super excited when I learned that the Call of Duty tent on Second Avenue housed a Black Ops 3 – Zombies inspired escape room for con goers to try out for free. 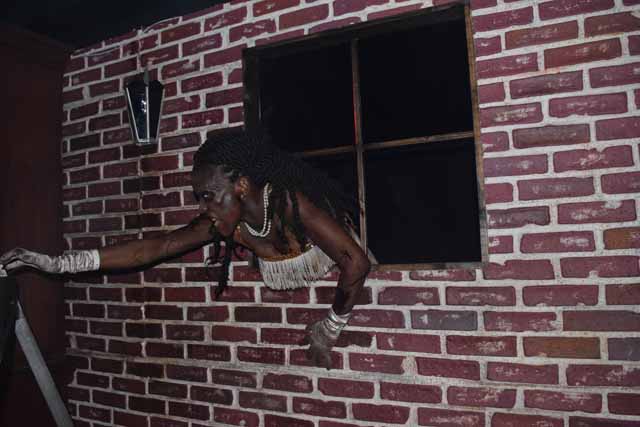 Of course while most Escape Rooms give you an hour to try and figure out how to escape, for the sake of keeping the line moving, this was a very truncated version, having a time limit of only about 10 minutes or so.

Still, the atmosphere was thick, with one room taking place inside of a 1920’s burlesque club, and another taking place inside of a magician’s apartment. Whichever room you went into though, things would quickly take a turn for the worse as zombies would try to crawl through windows and fireplaces, requiring players to board up the openings just like you’d expect while playing a round of Zombies in Call of Duty.

The room I was in required us to unlock a cabinet containing a deck of playing cards with an X, O, triangle, and square on four specific cards. By arranging them in the order of how they would be on a Playstation controller, we were able to get the combination to open a lock that would give us the item we needed to place inside the Mystery Box to unlock the door leading to our escape.

All in all, this was a super fun fan experience and a great way to introduce the new Zombies mode to the masses at Comic Con. 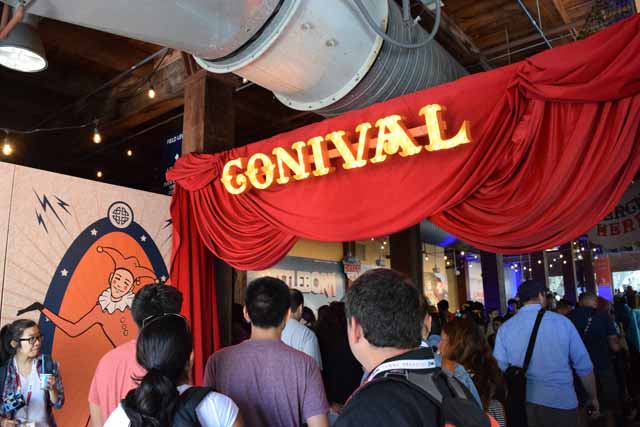 Over at Petco Park, Nerdist helped transform the baseball stadium into a “Conival,” featuring demo stations for people to try out the E3 demo of 2K’s Battleborn, snag a few photo ops, check out some special guest panels, participate in American Gladiator style jousting, and most importantly, play laser tag.

That’s right, Laser Tag made its return to Petco Park this year, and mercifully took place inside the actual stadium this time instead of subjecting its players to the fury of the blazing sun like last year.

As cool as laser tag was though, it doesn’t hold a candle to what was offered over at the Microsoft lounge for a little game called Halo 5. 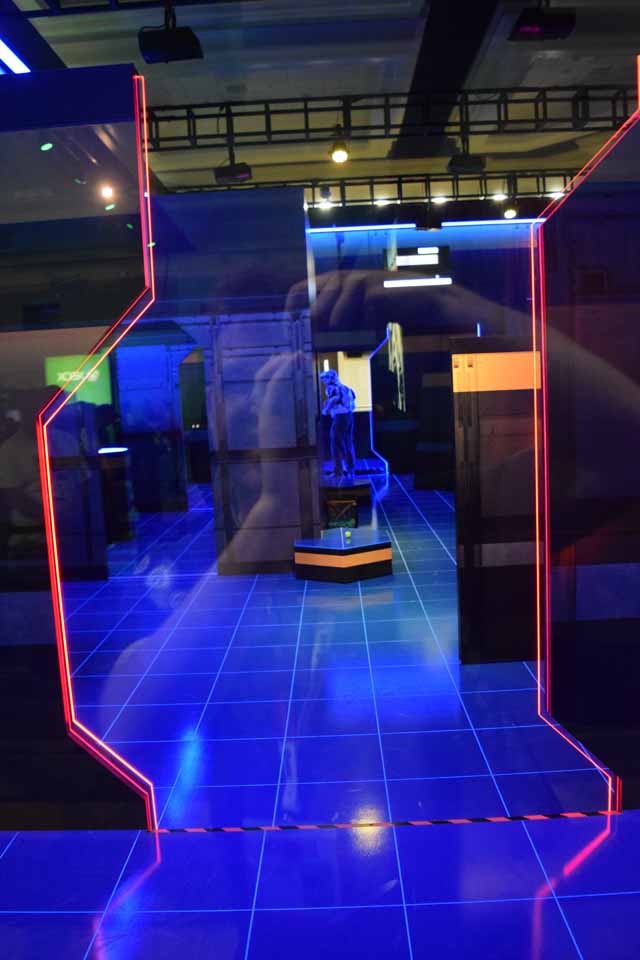 Please forgive my reflection in the picture

Tucked away inside the Xbox Lounge inside the Manchester Hyatt hotel was an arena decked out to look like one of the Breakout maps that players might remember from the Halo 5 multiplayer beta that took place several months ago.

But rather than being an arena for laser tag, like you might expect, players were instead armored up with protective gear, given single shot Nerf guns modeled after UNSC Magnums and Plasma Pistols, split up into teams of 4, and would compete in last man standing skirmishes.

The rules were simple, if you get shot and the dart sticks to your chest, shoulders, or helmet, then you were out. In addition, each player was armed with a single sticky ball that served as a grenade, which could be stuck to an opponent to get them out. On each side of the arena, there was also a power weapon that could fire several shots quickly without having to be reloaded, but in order to get control of it, you needed to put yourself right out in the open.

While we spent the first game trying to actually devise a strategy involving holding down the enclosed area with the power weapon, eventually it all broke down to exhausting our ammo supply, and then rushing forward in an almost certainly suicidal attempt to stick a grenade to their chest.

We ended up losing, but the whole experience was by far one of the most fun activities to do at SDCC. 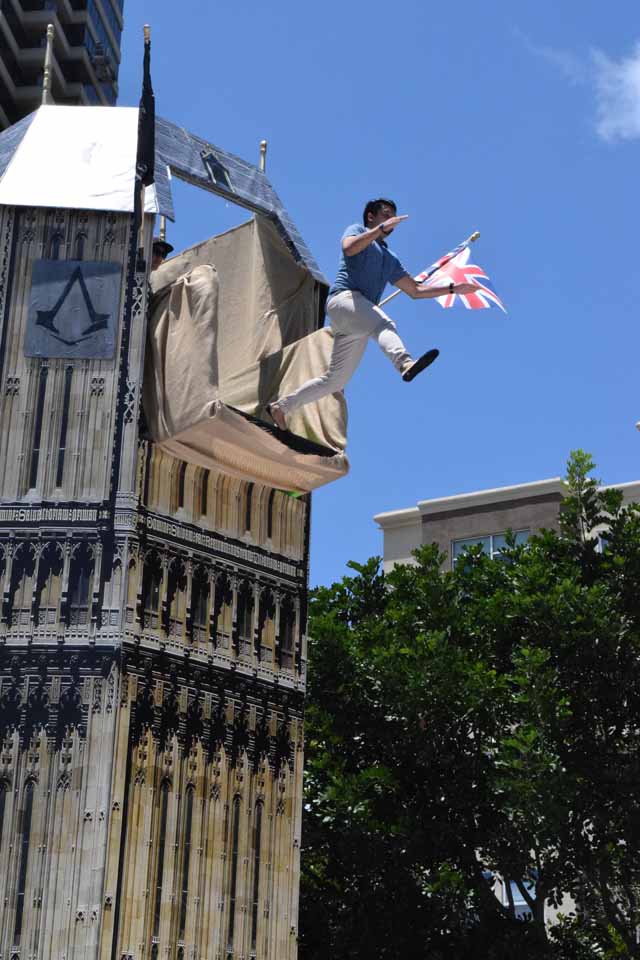 Another returning favorite from last year was the parkour course from Assassin’s Creed, which gave people a chance to run a Ninja Warrior-esque obstacle course. The course definitely upped its game this time around, giving participants the opportunity to try to overcome obstacles well known on Ninja Warrior, like the Warped Wall and the Spider Climb (albeit much friendlier versions of those obstacles)

After running through the course, the experience is topped off by a 25 foot leap of faith into an air bag.

Unfortunately, no one was around to record my run through of the course. So, instead, I leave you with some footage from last year of my colleague James Heaney running through the course to give you an idea of what it’s all like. 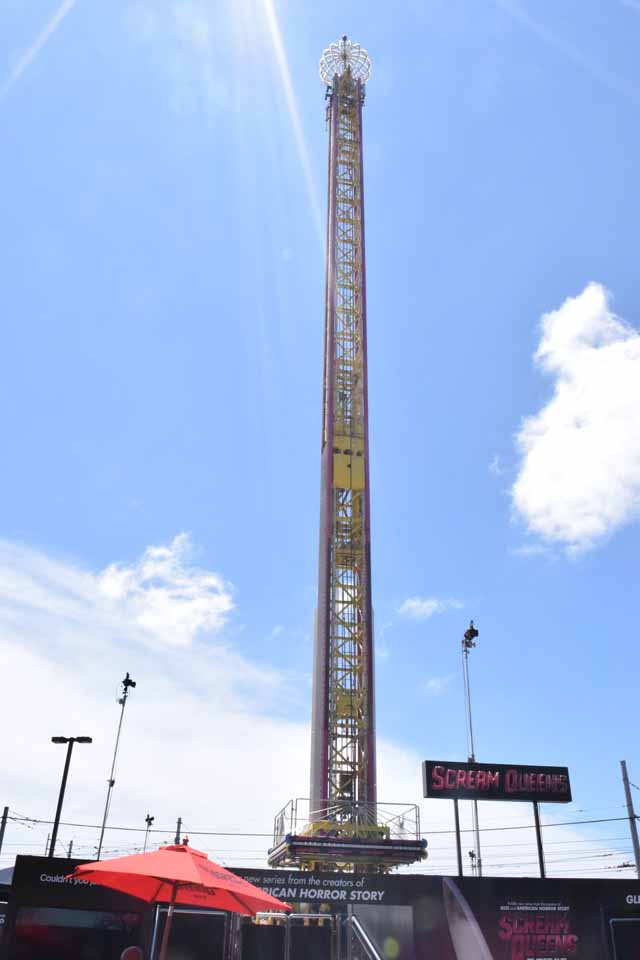 There wasn’t any common unifying theme for the attractions over at the Petco Park Interactive Zone, but it was still a place where non-badge holders could get a taste of Comic Con without actually being inside the halls.

The most notable attraction at the Interactive Zone was a gigantic Supreme Scream-style thrill ride sponsored by the upcoming TV series, Scream Queens. The ride, called the Mega Scream Drop, would lift riders up 120 feet, before stalling for an excruciating 5-10 seconds, before letting gravity do its job.

Dark Souls fans could check out the awesome blood fountain that E3-goers were lucky enough to see back in June, Alienware had a tent up to invite players to play a bunch of games on their newest hardware, and of course, you can’t forget the about the gigantic Snoopy dog house where fans could take pictures and then exit through a slide on the upper floor of the house. 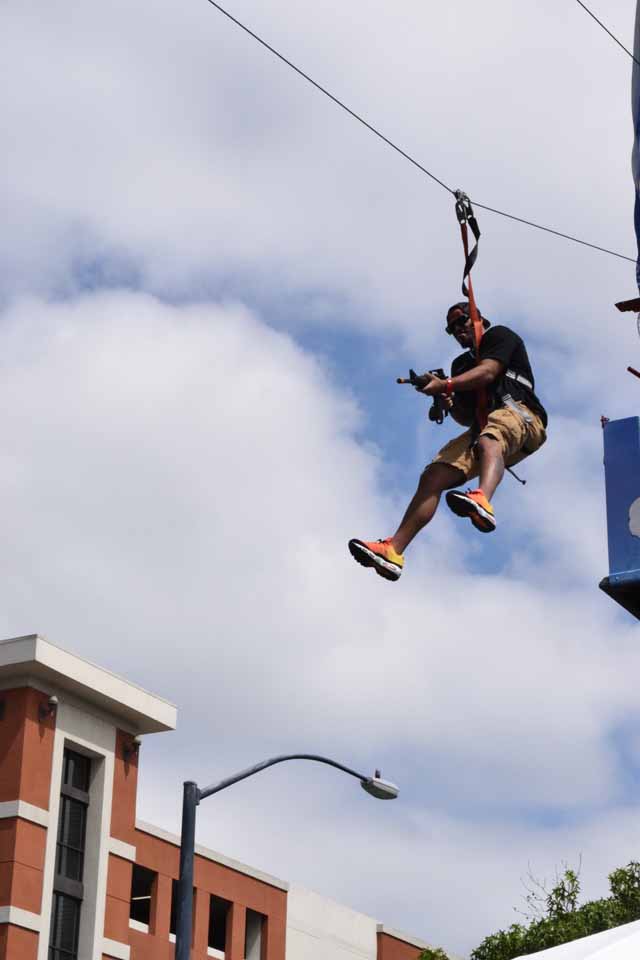 Probably the most well hidden attraction of the convention was Square Enix’s take over of a parking lot on 7th and Market. Dubbed the “Square Enix Experience,” the lot featured four main attractions, each themed after an upcoming Square Enix title, and all open to the general public.

First, there was the Just Cause 3 zipline, which as you might imagine, featured a 150 ft. long zipline attached to a 40 foot tower. But just going down a zipline isn’t enough to warrant the Just Cause branding, so of course you’re outfitted with a rifle and challenged to shoot down several targets while zipping. A task that proved embarrassingly difficult for one as uncoordinated as I. 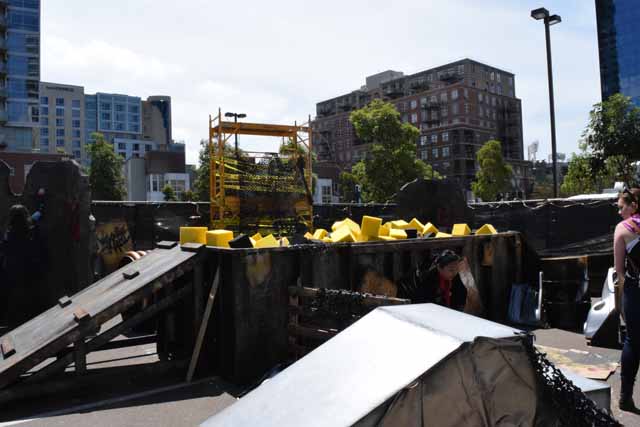 Then there was a Deus Ex: Mankind Divided obstacle course that challenged participants to find bottles of Neuropozyne, the serum that augmented individuals need in order to stay alive. It was essentially a glorified Easter Egg hunt, with yellow bottles worth 5 points, gold bottles worth 25, and black bottles worth 50.

The Hitman Inspired course was probably the least exciting. Dressed up as a training regiment for new Assassin’s, participants first had to assemble a weapon, which basically entailed sliding a sight onto a rifle, and snapping a handle in place on the bottom; then fire a fake pistol at several non moving targets; then hiding a couple of mannequins in obvious hiding spots without being spotted by a spotlight. At least there was a free tie involved in the deal.

But the big selling point of the Square Enix experience? A beer garden with $2 beers! 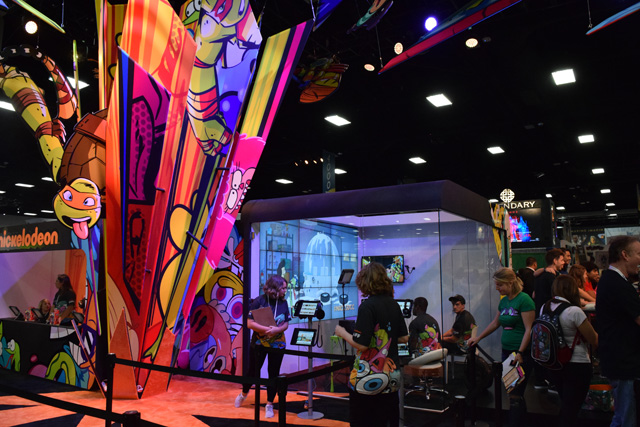 Okay, this is technically cheating on my initial prompt because this actually was inside the convention hall, but I have to include it because it’s one of the things I look forward to every year at Comic Con.

At specific times at the Nickelodeon booth, they open up a recording booth where con goers can go inside and dub over scenes from classic Nickelodeon Cartoons. The list of scenes is actually quite extensive and covers both one and two person scenes. Everything from Spongebob, to Avatar, to Teenage Mutant Ninja Turtles, even to classic 90s shows like Hey Arnold are open to dubbing.

Here’s a quick look at my own personal piece of magic from the booth.