Canada is widely perceived as a nation with a more liberal and enlightened attitude toward matters of social relevance than our neighbor to the south, and it’s a perception many of us not only enjoy but actively promote. Gay marriage, the evil weed, assault and battery in the commission of a professional sporting event and Cuba are all just fine up here. Another area in which the country is known to have a very laissez-faire attitude is copyright in the digital era. But those days are coming to an end.

By many measures, this is actually good news. Like a surprising number of things in Canada, the wide range of rights we appear to enjoy aren’t rights at all but rather a simple absence of prohibition or, as the Royal Canadian Mounted Police admitted in 2007, a complete lack of interest in enforcement. To indulge the stereotype a bit further, digital copyright in Canada is kind of like the crease rule: no harm, no foul.

But the Copyright Modernization Act, better known as Bill C-32, aims to change all that, and in many positive ways. Content creators are given the right to use existing copyrighted works in the creation of new material, limits are applied to the liability of internet providers and individuals are granted various rights to record broadcasts for later viewing, move digital music tracks between devices and even to make backup copies of media like, oh, say, videogames. It’s not perfect but most people would agree that compared to certain other disturbingly myopic codification attempts, the Canadian approach is pretty good stuff. Enlightened, even.

Unless, that is, you’re dealing with media that’s protected by some form – any form – of DRM. Then everything falls apart.

Consider, if you will, subsection 29.24, entitled “Backup Copies.” According to the new bill, “It is not an infringement of copyright in a work or other subject-matter for a person who owns – or has a license to use – a copy of the work or subject-matter (in this section referred to as the ‘source copy’) to reproduce the source copy if, (a), the person does so solely for backup purposes in case the source copy is lost, damaged or otherwise rendered unusable; (b), the source copy is not an infringing copy; and (d), the person does not give any of the reproductions away.”

Bam! The government of Canada just said it’s a-okay for people to make backup copies of their stuff – games, movies, music, whatever. That’s a definite step forward for consumer rights. “But wait,” you might be thinking. “You skipped (c). What about (c)?”

This is where things get problematic. Because (c), you see, goes like this: “The person, in order to make the reproduction, did not circumvent, as defined in section 41, a technological protection measure, as defined in that section, or cause one to be circumvented.”

What that means in normalspeak is that you, as a Canadian consumer, have the right to do all these wonderful things with the media you own, unless the creator or publisher slaps some form of “technological protection measure,” also known as a TPM or digital lock, on the content in question. In that case, your “rights” in the matter are rendered essentially null and void. You cannot legally make a backup copy, you cannot burn the music you purchased from iTunes onto a disc to listen to in your car and you cannot make a recording of a broadcast to watch later. The presence of a digital lock (and yes, we’re talking about DRM here) trumps everything.

Kind of a shocker, isn’t it? Obviously, this updated law will do very little to address the legitimate concerns of consumers; in fact, it will do just the opposite, as this clause (which appears several times in the bill and applies to nearly every instance of legitimate copying you care to name) actually encourages publishers to implement some method of TPM in order to establish their legal primacy. The effectiveness of the digital lock is irrelevant; all that matters is that one is in place. And then you, your parents, your kids and just about everyone else you know who has a passing familiarity with a PVR or ripping their music to their PC will be at serious risk of becoming criminals. 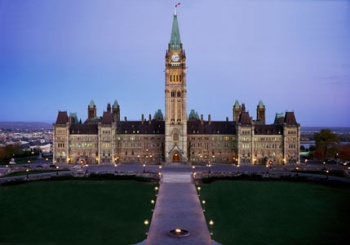 Criminality is relative, of course, and you might think that as long as you keep things low-key, nobody’s going to bother with you. You’re probably right. But bear this in mind: First, if someone does decide to bother with you, you’re screwed. A conviction on indictment can bring a fine of up to $1 million and five years in the slammer. And second, it’s going to be a lot harder to break those laws in the first place, at least for casual consumers, because the bill also makes it illegal to provide, via the internet or through other means, any service designed primarily to enable acts of copyright infringement. In other words, you can kiss your modchips goodbye, no matter what you ultimately do with them.

The solution is obvious: Modify the TPM clauses to allow for circumvention in cases where it doesn’t lead to infringement. But there’s no sign that the government is even considering such a move. Grassroots efforts like SpeakOutOnCopyright.ca are doing their best to make the case to the Canadian public but the government is pushing back with shockingly inflammatory rhetoric. In a recent speech, Heritage Minister James Moore, an ardent champion of the bill, called opponents “radical extremists” who “don’t believe in copyright at all” and presumably seek to create some sort of intellectual property Wild West.

In reality, opposition to the TPM clauses in the bill is spread across an enormous range of interests, from the Canadian Association of University Teachers to Loading Ready Run, but the government is like a dog with a bone; Bill C-32 is its third attempt at copyright reform since 2005. The real problem, however, isn’t the government’s determination to hammer this bill through, it’s the utter indifference of the average Canadian consumer. I’m loathe to say “most” because I don’t have statistics to cite but I’d be willing to bet than an awful lot of Canadians aren’t even aware that this is happening and that among those who are, a significant portion simply don’t care. Look at it this way: In two months, an internet petition against Bill C-60, the original “Act to amend the Copyright Act,” managed to garner all of 1800 signatures. By way of comparison, a petition calling for the release of a collector’s edition of BioShock rang up 14,000 signatures in just 24 hours.

There are areas of concern in C-32 that go way beyond the scope of mere “gamers’ rights” to include access to educational materials, high-level research, library lending and software interoperability. As University of Ottawa professor and noted copyright critic Michael Geist pointed out, Linux users could suddenly find themselves unable to legally play DVDs on their computers. “This operating system cannot officially play DVDs since most commercial DVDs contain a digital lock and the entity that controls the lock does not license the necessary locks to play DVDs on Linux,” he wrote. “Programmers have developed alternatives, but all involve circumventing the digital lock, an act that becomes illegal under Bill C-32.”

With so much happening on the Canadian political scene – economic instability, the mission in Afghanistan, an increasingly fragmented and deadlocked Parliament – it might be hard to imagine copyright reform as a Big Issue. Don’t be fooled. The digital era is here and the impact of our reaction to it will resonate for years. Contrary to what Minister Moore claims, most of the people who stand against Bill C-32 agree that a modernized copyright law is both necessary and welcome. But criminalizing wide swaths of the Canadian public as part of that process is most definitely not.

Andy Chalk, contrary to occasional opinion, is not a stooge of The Man. Bill C-32 is available in its entirety at the Parliament of Canada website (PDF format).