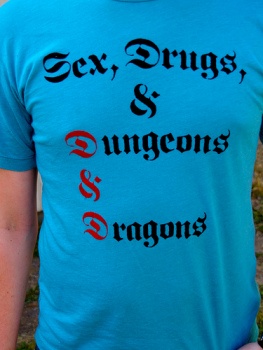 I have an admission to make: I’ve never been a big Dungeons & Dragons fan.

That’s not entirely true. I’ve actually been a huge fan over the years, immersing myself in the various worlds of the D&D universe, enjoying the stories and settings of mighty and fallen empires, the great heroes and villains of the realms and the dark, imagined hallways of ancient dungeons and haunted caverns that criss-cross the planes. Those fantasy settings were hugely influential on me, giving me a love of sword and sorcery that has never waned. No, the truth of the matter is simply that I’ve never been a very good Dungeons & Dragons player.

I’ve participated in a few campaigns – the last and best of them spanning almost an entire summer more years ago than I care to consider – but I never developed a knack for it. I was never able to immediately recite what rolls I needed to accomplish one particular task or another, and my grasp of THAC0 was very much like my grasp of the infield fly rule: Every time I thought I had a handle on it, it would turn around and bite me in the ass like an angry kobold (or David Eckstein). While the other players at the table were rattling off spells and saving throws at a blistering pace, I would be furiously rifling through books and papers, trying to find something to say that wouldn’t make me look even stupider than everyone already assumed I was. Fun and frustration seemed to come in equal measures.

The advent of the computer RPG, then, was a godsend. Arcane number crunching was suddenly not my problem, and if I wanted to take a minute to consider my options, nobody was going to get on my ass about holding up progress. The Gold Box games and, even more significantly, the Eye of the Beholder titles cemented my love of the genre; they provided a solo approach to what was until then an inherently social form of gaming. When Baldur’s Gate and Planescape: Torment arrived, my brain just about exploded; here, on my computer, was the full D&D experience as I had always imagined it, the real deal, an epic tale of high adventure that even a dice-dummy like me could handle like a pro. It was perfect. I’ve played a lot of different games across a lot of different genres, but since those days nothing suits me better than swords and shields, monsters and treasure, deep dungeons and soaring castles.

So isn’t it odd that after finally buying Mask of the Betrayer, the expansion to the Forgotten Realms-based RPG Neverwinter Nights 2, I’m closer than ever to throwing up my hands and walking away from the whole thing?

I wish it wasn’t that way, but in truth, it’s been a long time coming. Every D&D-based release since sometime around the Temple of Elemental Evil adaptation has been source of increasing disappointment and annoyance, and it’s not too hard to figure out why. Let’s have a show of hands: Who wants to play a Half-Drow Sacred Fist? No? Not your cup of tea? How about a Svirfneblin Red Dragon Disciple? Anyone? Maybe a Strongheart Halfling Eldritch Knight? That sound like fun to you? 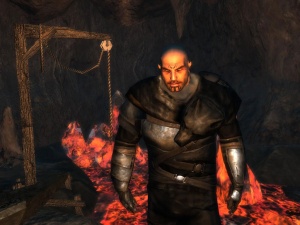 It sure as hell doesn’t sound like much fun to me. I tried to roll with this nonsense when the original Neverwinter Nights was released; I played as a Half-Elf Arcane Archer, and while it seemed to go well enough I suspect I simply had a higher tolerance for lower standards thanks to the game’s overall mediocrity. When the sequel arrived, I decided I’d get more enjoyment out of it if I played a “better” class, rather than just whatever seemed cool at first glance, so I put some serious effort into various race and class combinations, trying one exotic build after another in a search for the perfect fantasy hero.

I realized things had spun completely out of control right around the time I started giving serious thought to trying a Half-Orc Arcane Scholar of Candlekeep. All the rules and statistics and other such bullshit I’d so happily left behind all those years ago were suddenly being shoveled back onto my lap by the very medium that had liberated me from the depths of RPG incompetence. Simplicity and imagination were out, apparently; prestige classes, epic characters and numbers, numbers, numbers were in. How is this fun?

Simple: It’s not. It’s spoon-fed crapola for people who can’t wrap their heads around the idea that not everything needs to be straitjacketed with rules. “It’s a game of the imagination,” so the man famously said, but the imagination part seems to be falling by the wayside as the game dictates more and more of what I can, and cannot, be. All the best roleplaying games, from the cops and robbers of childhood to the Big Bad Wolf in the bedroom, work best when there are just enough rules to make things functional and plenty of room for the imagination to run wild. Take away those creative wild spaces and what you’ve got left is Parcheesi with bad voice acting. And that ain’t my D&D.

My D&D includes big, beefy fighters, tweedy magic users, annoyingly self-righteous clerics and, greasy bastards though they may be, the occasional thief when it’s time for someone to suck down a trapped chest. These are the archetypes that built a great gaming empire; these are the characters that brought a magical universe to life for thousands of gamers. This may be one of the most horribly nerdy declarations of principle ever made, but Third Edition be damned; my Dungeons & Dragons is Advanced!

And while I know I can’t change what D&D has become, I can most definitely change what I do with it. So I tossed all this multi-class sissy stuff out the window and I built me a Fighter. Massively muscled, single-classed and perhaps not the brightest soul you’ll ever meet, I like to solve my problems by hitting people. Or hitting things. Now and then I’ll mix it up by hitting people with things. Sometimes I’ll do it in the service of a higher cause, occasionally I’ll even swing my sword in the name of a particular deity – and sometimes maybe because I just don’t like the way you’re looking at me. But whether I’m the Red Blade of Tempus or the half-drunk jerk at the end of the bar, it’s my character and I’ll do it my way, thanks – because building a character isn’t half as much fun as being one.

Andy Chalk still has a soft spot in his heart for the longsword Namarra, even though he has no idea what’s actually special about it.