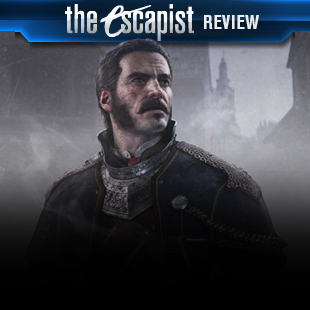 If you’ve been following the gaming space over the past few days you already know there’s been a lot of back and forth on The Order: 1886. For those who missed it, the short version is that a full playthrough was leaked to YouTube before review embargo and the game was completed in under six hours. Once games started to move away from their simplistic, but highly replayable roots, the debate on acceptable game length found its beginnings. Let’s face it, video games are not cheap, and for most of us that means being careful consumers in order to get the most bang for our buck. Whether it’s trying to rationalize the value against another medium, like a movie ticket, or arguments of quality vs quantity, this is an issue that’s not going away any time soon. This is largely because it’s a value judgement, not something that can be easily quantified. With this in mind, I’d like to step away from that debate and simply relate what the experience of playing The Order: 1886 was like.

Let’s start with the good. It’s not surprising, given The Order: 1886‘s tent pole status as a PS4 exclusive put out by one of Sony‘s first party developers, that everything involved with The Order: 1886 production quality is absolutely top-notch. The Order: 1886 is easily the best looking game currently available on next-gen consoles. A dirty, rain-blustered, and grimy post-Industrial-Revolution-era London has never looked better. Given the settings, you might be inclined to harsh on it all for being a bit drab, but I found the color scheme appropriate and only helped to make the figuratively, and literally, more colorful elements – such as the steampunk weapons – more fantastical. Of particular note are the lighting and water effects, all too often you’ll be inching along in the dark with only a gas lamp to guide you, and it just wouldn’t be London without tons of rain leaving puddles all around. The graphics really do go the extra mile in building up this setting and world, and the game manages to almost seamlessly transition from cutscenes to gameplay. When I say “seamless,” I mean there’s no loading between the two. The game switches back and forth flawlessly. On more than one occasion there would be an awkward pause when I hadn’t realized that a cutscene had finished and I was given control back. The Order: 1886 really does look that good.

While the graphics are obviously going to get the most attention, I would be remiss not to point out The Order: 1886‘s strong aural endeavors. A sound designer or composer might not get a lot of credit when it’s all said and done compared to a game designer or graphics artist, but there is plenty of craft and talent applied to it. Both the musical score and sound design are really well done, from the clatter of a horse-drawn wagon pulled down a rainy street to the satisfying thud of weapons fire. These are the little details that can make or break an experience, sometimes without even being fully aware of it. The Order: 1886 keeps you immersed, heck I’m reasonably certain they sound sampled some of the firearms from real muskets and even a crazy, lightning-bolt-spewing Arc Gun sound appropriate. The game’s composer Jason Graves was the man behind the award winning score of Dead Space, and the music sets a perfect eerie mood throughout the game. The dialogue and voice acting are similarly impressive, though I do have a minor gripe with the sometimes anachronistic words and phrases characters occasionally spout. Yes, this is alternate history. No, that doesn’t make it ok for your turn of the century character to use “stealth mode” in conversation.

What I really wished there was more of in The Order: 1886 was its setting and world building. It’s a shame that the Wikipedia plot synopsis ends up sounding more interesting than the window dressing that appears in game. What we were teased was steampunk monster hunters, with Nikola freaking Tesla on staff, using their weaponized scientific contraptions to dispense with mythological terrors in an alternate history, turn of the century London. What you really get is shooting at rebel humans almost exclusively the whole game, with mundane firearms that are roughly half a century ahead of their time. Unless I miscounted, you can virtually count on one hand how many times you encounter non-human enemies, and if I wanted to play a game with a bunch of vaguely World War II-era weapons, I’d just play one of the many, many, World War II games. Maybe my expectations were never in line with the developers’ vision for the game, but it feels like there’s all this elaborate backstory about who the knights of The Order are, the greater conflict between the knights and the half breed monsters, and so much more that’s potentially way more interesting than what The Order: 1886 frames its narrative around. There’s something to be said about not over elaborating on every little thing, but there’s a problem when I found myself way more interested in the details of world than the plot itself. 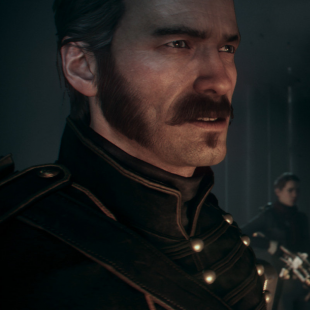 I certainly wouldn’t say that the story of The Order: 1886 is bad, though we’ll get to the ending later. You’ll spend your time in The Order: 1886 as Grayson, aka Sir Galahad or simply Gray depending on who’s addressing him. He reminded me of Jack Bauer, but with a dapper mustache and mutton chop sideburns – which already makes him way more likable. The characters that Grayson interacts with are interesting, and the game does a good job of eluding to their deeper relationships without being completely forward about it. I even really enjoyed the stereotypical womanizing Frenchman, Marquis de Lafayette, as he added just the proper dose of comedic relief to the adventure without being too ridiculous. Without revealing too much, Grayson and knightly friends start out dealing with some rebels in Whitechapel, but the narrative quickly spirals into larger conspiratorial issues. Put it this way, the Jack the Ripper murders are just a related side detail that the game casually drops an explanation for. 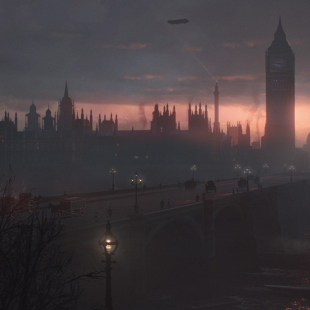 With its gorgeous, next generation graphics, interesting setting, and decent enough story, The Order: 1886 is sadly saddled with just about every same old action adventure gameplay element you can imagine. Stop me if you’ve heard of these before: excessive quick time events, instant fail stealth sections, lock-picking/hacking minigames, third person, cover-based shooting, two weapon inventory, unnecessary platforming, hunting around the environment to find the prompt to progress the mission, waiting on NPCs to open doors, and the list goes on. Any number of these are no reason to immediately discount a game, but The Order: 1886 is just a dearth of any gameplay innovations. Another developer might be able to craft these together in a more exciting or interesting mixture, but it just feels like a slog in The Order: 1886. For instance, a door hacking or lock-picking minigame might be well implemented in a stealth game where you risk detection, but here it’s just busy work.

The combat itself is at least well made and fun to play at times. The cover system isn’t overly cumbersome and everything feels natural and smooth. The non-mundane weapons are extravagant and offer some interesting gameplay changes. There’s an Arc Gun which shoots lightning, but because it essentially homes in on enemies it’s perfect for blind firing over cover. Then there’s the Thermite Rifle, the primary fire of which shoots out a cloud of thermite that you then need to ignite with a flare from its secondary fire. The flare also lingers in the area for you to shoot more thermite at, so it’s particularly good for denying enemy an area to advance from. Unfortunately, that exhausts all the fun weapons. There’s a grenade launcher as well and a specific section with a rocket launcher-esque weapon, but everything else is just a normal gun of some sort. To make matters worse, even if you do get one of the interesting weapons, thanks to the inventory system, where you can only have a primary weapon and a secondary pistol, you generally ditch it since you’ll quickly run out of ammo – if the game doesn’t take it away in a cutscene. Though also remember that you’re going to be killing the same normal mooks, shotgun dudes, and armored bullet sponges over and over.

There’s just a lot of these poor design choices peppered through the game. Like the whole Black Water system being basically pointless. Black Water, which is a really interesting setting and gameplay element that doesn’t get nearly the amount of time it should, allows an injured knight to quickly recover from otherwise fatal wounds. In game, it’s essentially a downed state that gives you a one time chance per level to recover. The problem is that it’s almost completely ineffectual in actual gameplay. While you’re downed you can only crawl around on the ground waiting for the prompt to appear in order to drink, and most of the time you’re only getting killed when an enemy sneak up on you or you got overly aggressive. So, 9 times out of 10 you just get shot, put into the downed state, and then shot and killed before you could recover anyways.

Finally, it does need to be mentioned that the whole game is not very long. Instead of discussing the minutia of adding an hour or two depending on the difficulty and how many audio logs you hunt down. Just know that you’re going to finish The Order: 1886 in probably two sessions or one long afternoon into the evening, maybe three if you don’t like playing games for more than few hours. While I would still normally leave this as a personal value judgement, there are some problems so egregious with the game’s ending that it needs to be addressed for anyone thinking of buying it. So, from here on out spoiler warnings for the end of The Order: 1886. There are two major issues with the end of the game. For starters, part of the problem with The Order: 1886‘s game length is that is doesn’t even properly end. If the developers had delivered a really tight paced and entertaining story that would be one thing, but the end of The Order: 1886 doesn’t resolve most of the major plot lines. There’s even a mid-credits cutscene of Grayson telling Nikola that he’s got more to do. Also, the final boss fight is quite literally ripped animation by animation from a previous fight earlier in the game, which is just utterly unacceptable. My last thoughts for your game shouldn’t be “that’s it?!?”.

Ultimately, I feel one of two things happened. Either Ready At Dawn wanted to make something bigger and better, and there are glimmers of that in The Order: 1886. When they started, they might have set out wanting to make some grand adventure akin to the Uncharted series but in a new unique setting, and somewhere along the line that fell through and we’re left poorer because of it. The other option is that The Order: 1886 was supposed to be a release title, think along the lines of Ryse: Son of Rome. It was never going to be more than a glorified technical demo showing off the new hardware, but instead of coming out around the console release it got pushed back. Whatever the reasons, The Order: 1886 is a beautiful shell that’s mundane in execution.

Bottom Line: The Order: 1886 is bland gameplay wrapped in admittedly gorgeous next generation graphics. It’s not bad through and through, it’s just disappointing.

Recommendation: It’s still pretty and serviceable enough for a playthrough, but you’re better off renting it or borrowing it from a friend for the weekend.