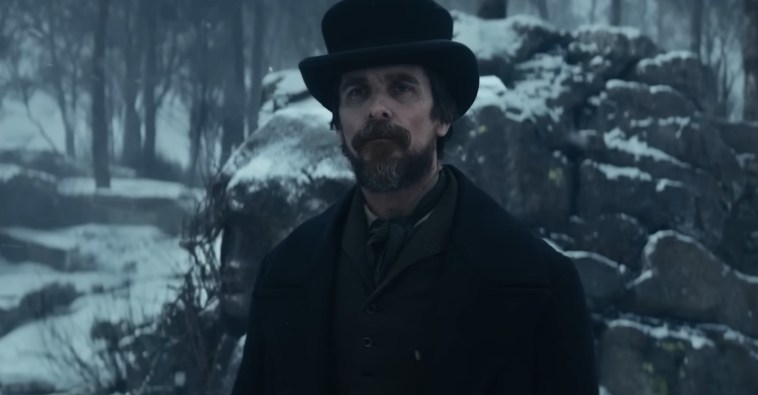 There is a world and time in which Edgar Allan Poe is really hot right now and a murder mystery featuring him and a Sherlockian detective makes a whole lot of sense to make. That world is not this one, and that time is not now. Despite this, Netflix has made The Pale Blue Eye, a film that features Christian Bale playing a grumpy detective who enlists the help of a young Edgar Allan Poe in order to solve a grisly crime at West Point. Now that you too are thinking “WTF,” you can check out the trailer below.

The Pale Blue Eye comes from writer / director Scott Cooper, whom Netflix seems to think is a respected art house guy but is pretty hit or miss when it comes to quality, though the atmospheric Antlers does bode well for his ability to set the scene for this film. It’s based on the novel of the same name by Louis Bayard in which Detective Augustus Landor is called to West Point to solve the case of a cadet who was brutally murdered and had his heart carved out. However, he can’t break the new military school’s code of silence and so enlists the help of a student there by the name of Edgar Allan Poe (Harry Melling). The pair begin to unravel a dark and possibly mystical secret as we get a kind of fictional origin story for the lauded poet.

This one is an awards pusher for Netflix, just in case you couldn’t tell. The book it is based on is wildly popular, and both Bale and Milling are being buzzed about for some awards recognition in it. But it honestly seems just a little too out of left field to be that big a deal. While murder mysteries are always intriguing, it’s hard to feel that interested in something that looks this dour, even if it is clearly supposed to allude to Poe’s gothic future as a poet and writer. Still, the streamer is pulling out the stops with a cast that also includes Gillian Anderson, Lucy Boynton, Charlotte Gainsbourg, Toby Jones, Harry Lawtey, Simon McBurney, Hadley Robinson, Timothy Spall, Joey Brooks, Brennan Cook, Gideon Glick, Fred Hechinger, Matt Helm, Jack Irving, Steven Maier, Charlie Tahan, and Robert Duvall.

The Pale Blue Eye will have a limited release in theaters on December 23 and land on Netflix on January 6, 2023.