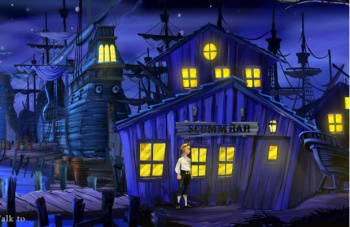 Thursday was a good day. I woke up to discover that The Secret of Monkey Island: Special Edition was suddenly available on the App Store, and I spent the rest of the day reviewing it . (In case you want to know, 10 out of 10.)

As I was playing, I inevitably had half an eye on Monkey Island 2: Le Chuck’s Revenge. Surely that would be along in time, followed by The Curse of Monkey Island, and then Return to Monkey Island. Maybe Grim Fandango.

To some, this kind of wishlist-making is healthy and normal. Just because gaming platforms become obsolete over time, doesn’t mean we should countenance the loss of the games along with the technology, any more than the inexorable replacement of celluloid by digital recording technology should entail that every film currently committed to celluloid should be scrapped and replaced with entirely new digital films.

To others, the endless regurgitation of retro titles on current platforms is a sign of creative drought in the medium and sloth on the part of those who code and distribute such games. The prefix ‘retro’ literally means ‘backward’, which tells you all you need to know.

Both sides have a point, though the argument hinges on the game in question and the platform. The PlayStation Store, XBLA and Nintendo’s Virtual Console are relatively – though by no means entirely – free of low quality retro ports, while the mobile phone is absolutely lousy with them.

To qualify that remark, since the beginning of July Pocket Gamer has published two reviews of Pac-Man games, one of them a rather good mobile conversion of the recent XBLA release, the other a lazy port of Ms Pac-Man whose soul meaningful claim to an independent existence is Bluetooth multiplayer.

To press the point further, there are four separate Ms Pac-Man reviews on Pocket Gamer, and eight reviews of maze-based Pac-Man games alone (a further two are conversions of the spin-off pinball series.) In four years, Pocket Gamer has reviewed 14 games with Pac-Man in the title.

The mobile phone is thus afflicted for the simple reason that its consumers aren’t typically gamers. On the operator decks, brand recognition counts for everything, so the games most likely to score a hit are those associated with prominent boardgame, film, television, or video game licences.

The iPhone is more of a gamers’ device, with unknown licences achieving levels of success that would be barely conceivable on mobile. Nevertheless, it contains an unhealthy proportion of regurgitated and badly-ported drek, including ports of Sonic, Golden Axe, Bomber Man, and, of course, Pac-Man. Here the problem isn’t the importance of brand recognition – although that plays a part – but ease of entry.

If a publisher has a licence knocking around, or can obtain one cheaply, why not bang it onto the App Store and see what happens? It doesn’t cost much and there’s no pesky quality control, which is why the one year old App Store has more than 13,000 games and the four year old XBLA has fewer than 250.

But what, when you get right down to it, is the distinction between Monkey Island and Pac-Man? How can I endorse the reproduction of one retro game but not another? On the face of it, there’s a contradiction. Retro games ought to be ported to new platforms for posterity; but retro games are weak slop and deserve to perish. 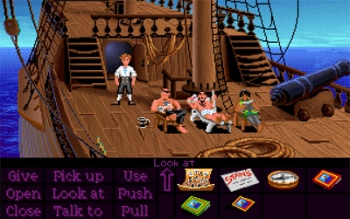 To reconcile the two poles, we need to acknowledge two things: one, that in the evolution of any creative medium there’s an initial period of formal weakness; and two, that therefore the term ‘retro’ describes anything that needs to be stripped out and replaced in order to make an old product competitive in a contemporary marketplace. Retro, in other words, is synonymous with formal weakness.

To invoke film again, it’s a rare enthusiast who would consider watching the earliest attempts at film-making for enjoyment, but leap forward to the middle of the twentieth century and you’ll reach a point in film-making where the distinction between old and new becomes irrelevant.

There are many things I like about Billy Wilder’s The Apartment, but its chronological setting isn’t one of them. Nor is it a negative, or even a distraction. The fact the The Apartment was made in 1960 just doesn’t matter, except as a novelty if you happen to like men in hats who talk slightly differently. By then, the language of film-making that we recognise today was established.

In the same way, the pixel-perfect conversion of Space Invaders that you can find on the App Store is interminably tedious. It was great in its time, but since then the language of video game has grown in sophistication to the point where the unadorned mechanics of Space Invaders are virtually incomprehensible. Playing the original Space Invaders now is like watching a very early silent film: interesting if you like that kind of thing, but entertaining only to a vanishingly small proportion of people.

The Secret of Monkey Island: Special Edition isn’t a retro game. It’s just a game. Everything that identified the original as retro – basically, the presentation; the rest more than stands up to any game of comparable price released now – has been stripped out and replaced with shinier parts. The same goes for Space Invaders Extreme, Pac-Man Championship Edition and Street Fighter 2 Turbo HD Remix. Despite the longevity of their respective licences, they aren’t retro games. Retro is the dust and crud that talented programmers have expunged from them.

This is something Nintendo, Microsoft and Sony all understand, and which mobile and to a lesser extent iPhone developers have failed to grasp: retro licenses may be good, but retro games never are.