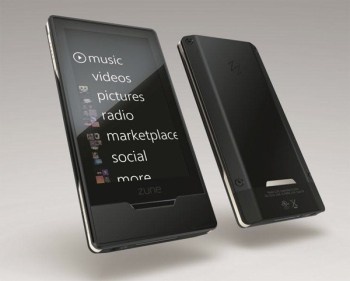 Has the world gone nuts? Let’s take stock for a minute. At this point in time, Sony is about to unleash a console with no boxed retail software, Apple has made a successful venture into the game industry, Nintendo has taken up photography and, more generally, the word ‘Xbox’ has replaced ‘PlayStation’ as the mainstream public’s gaming reference point of choice. (Don’t believe us? Just ask President Obama.)

These are strange days indeed, so unless Sega suddenly decides to release a new hedgehog-shaped portable console with a built-in combination Margarita and salsa dispenser, nothing about the handheld game industry’s current machinations should come as a surprise.

Not even Microsoft’s entry into the market with the Zune HD.

Given that the Zune brand was lumped in with Microsoft’s Xbox division from the off, the question of whether the device line would one day adopt some Xbox branded gaming functionality has long since been on many players’ lips.

Interestingly, rather than mimic Sony’s approach of shrinking down its under-the-TV offering into a sexy pocket sized unit, Microsoft appears to be making play for the iPod touch model, bringing gaming to an all-in-one touchscreen multimedia device that began life as a digital music player.

The interesting thing about the Zune HD, however, is that despite positioning itself in the decidedly casual/snackable realm, it’s got a snarling, grunting Nvidia Tegra processor at its core – one that’s theoretically capable of delivering higher fidelity visuals than any of its newfound peers – not that you’d know it by looking at the games currently available for the device. At the moment the Zune HD is home to a handful of free, ad-funded puzzle titles and other such casual fare. Those waiting for Halo Mobile had best keep their trigger fingers – and their wallets – holstered for the time being.

The Zune HD isn’t coming out fighting then, but like the DSi, PSPgo and the iPod Touch/iPhone before it, Microsoft’s new toy has carefully laid foundations that have the potential to support whatever interesting new handheld gaming shapes the market dictates over the next few years.

On the strength of the hardware’s sex appeal there are already several developers salivating at the thought of what might be possible on the Zune HD, but there are still so many big question marks hanging ominously on the horizon.

Will games be sold via Xbox Live with the Zune HD synching neatly with a console already placed in countless living rooms across the globe? The presence of Zune HD video content on Xbox Live bodes well for this eventuality, but there’s just as good a chance Microsoft will confine any Zune HD software to the Zune Marketplace, lest it gets involved in any cumbersome brand confusion across the two services.

Will there be a free SDK, à la iPhone? Or will Microsoft opt for the quality over quantity approach favored by Sony? Will XNA be the only development suite available to Zune HD hungry developers, or will Microsoft provide a more bespoke offering to cater to a broader group?

Of course, all of these questions are dependent on Microsoft actually donning some gloves and getting into the ring with the current crop of portable pugilists, something it hasn’t made any big noises about doing quite yet.

Let’s hope it does, because though there may be some debate as to whether we need another competing handheld console, one thing is for sure: we definitely don’t need another fancy-pants MP3 player.