Stardock’s The Political Machine 2016 is a simulation game that allows you to assume the role of a presidential candidate for the United States. The goal is to use your power and money to influence voters while outsmarting your opponents. Sounds easy enough, right? 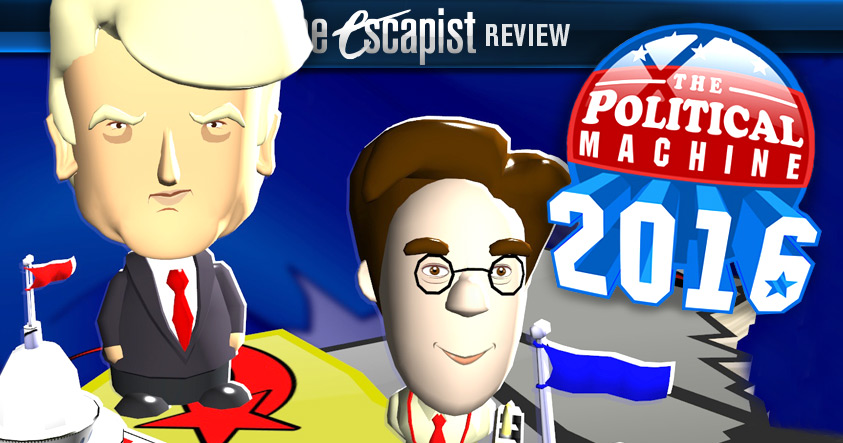 In The Political Machine 2016, you choose between a short (21 weeks) or drawn out (52 weeks) campaign. The difference in campaign length alters the gameplay in many ways–for example, a very short week means that some states are already exposed to the candidates and already forming an opinion of them with your initial loadout alone already convincing some states rather they are for or against you. You are also in control of your starting fund and difficulty levels alongside several randomized values, including state populations, state wealth, state demographics, and issue importance. While the visuals for the game are very silly with its bobble headed caricatures, the content can be quite serious. Hot-button issues in The Political Machine 2016 range anywhere from legalizing marijuana to gay marriage.

There are over 15 candidates to choose from that include the likes of Bill Clinton, Donald Trump, Bernie Sanders, Jeb Bush and Hillary Clinton. Each one has their own characteristics and issues based on their stamina, money, fundraising ability, charisma, appearance, credibility, experience, intelligence, media bias, minority appeal, and religious beliefs. 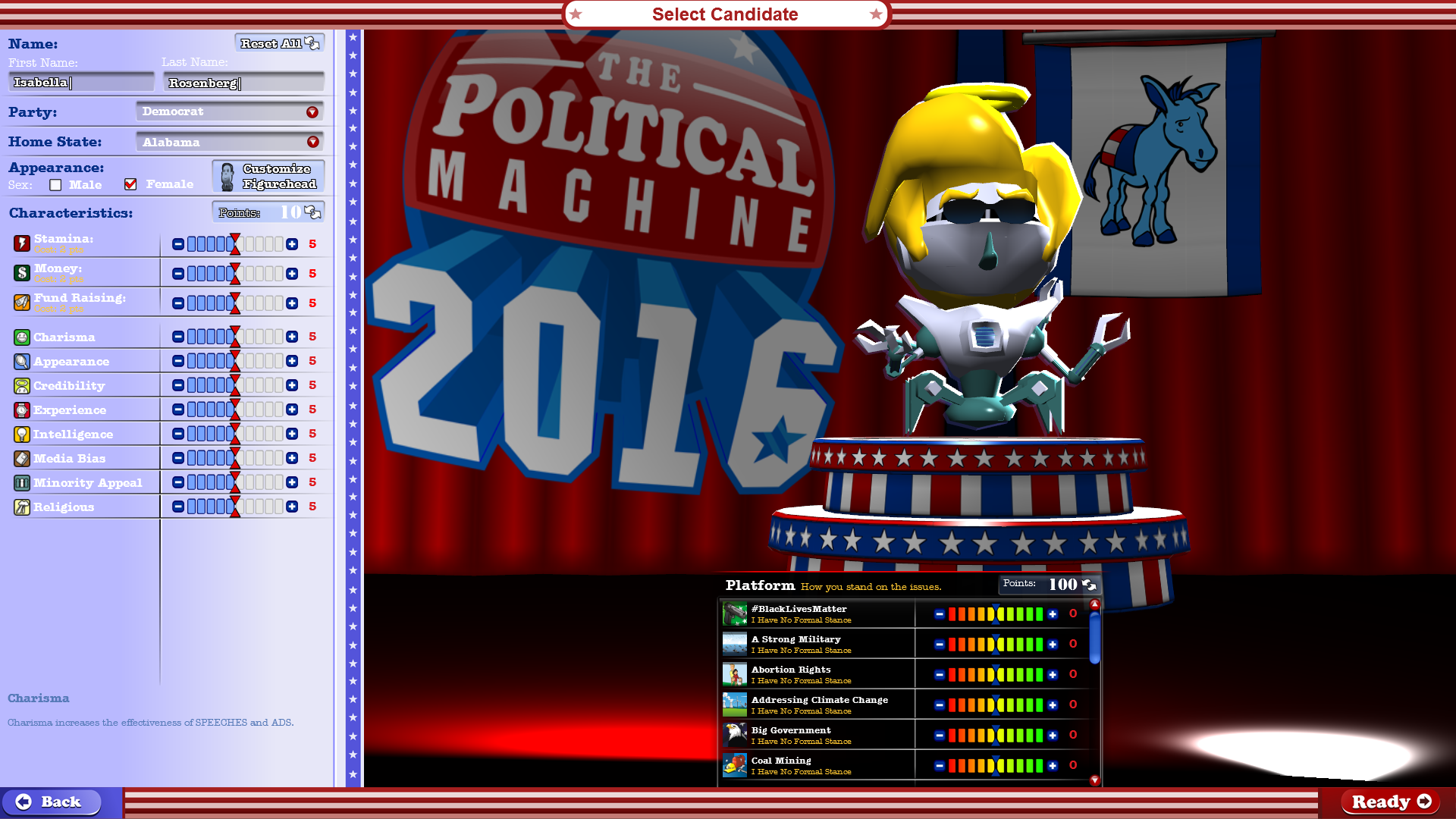 While it was tempting to pick one of the pre-made candidates, I opted to create my own monstrous creation to run for President. What I liked most about The Political Machine 2016 was that you can be as serious or playful as you want. There are a ton of customization options that made it fun and easy to create my very own presidential candidate. I was able to adjust their name, party, home state, appearance, and characteristics. In the end my presidential candidate ended up looking like a robot Elvis with no formal stance on any of the issues at hand. The platform for issues is based on a sliding scale where you can allocate points for each issue that you believe in, with 100 total points to use. Some topics included in the menu were a strong military, abortion rights, climate change and coal mining. However, Robotic Elvis doesn’t care about the issues and thinks humans are weak. It is here to do what robots are good for–cleaning up human messes.

Now that Robotic Elvis was ready to go, I had to decide what opponent to go up against. I decided I would face off against Donald Trump in a battle of wits, humor and hair. Facing off against Donald Trump meant one thing–I needed to get my hands on some better hair gel while simultaneously gaining some endorsements to battle his huge wallet. Gameplay in The Political Machine 2016 is very straightforward and easy to learn. You travel to various states and try to make them blue by winning votes. The biggest challenge is raising awareness in each state by matching your stance on issues to that of your competition in order to win like-minded voters. By clicking on individual states, you can learn about the top issues and statistics that you need in order to create awareness through fundraising, ad creation, and speeches. Fundraising helps you gain money in order to better your campaign strategy, while ad creation helps you tailor your words to the concerns and issues of particular states, but works very slowly when it comes to giving you any significant results in the polls. Alternatively, speeches are only effective if your candidate has high credibility, and seemed to work the best for my candidate in winning over the voters. Again, my candidate was a robot–it can’t lie, right? While this is fun at first, it became intensely repetitive after extended gameplay. Once the entertainment wore off, it was time for Robotic Elvis to cause some chaos and spend every free moment just sabotaging Trump’s campaign. 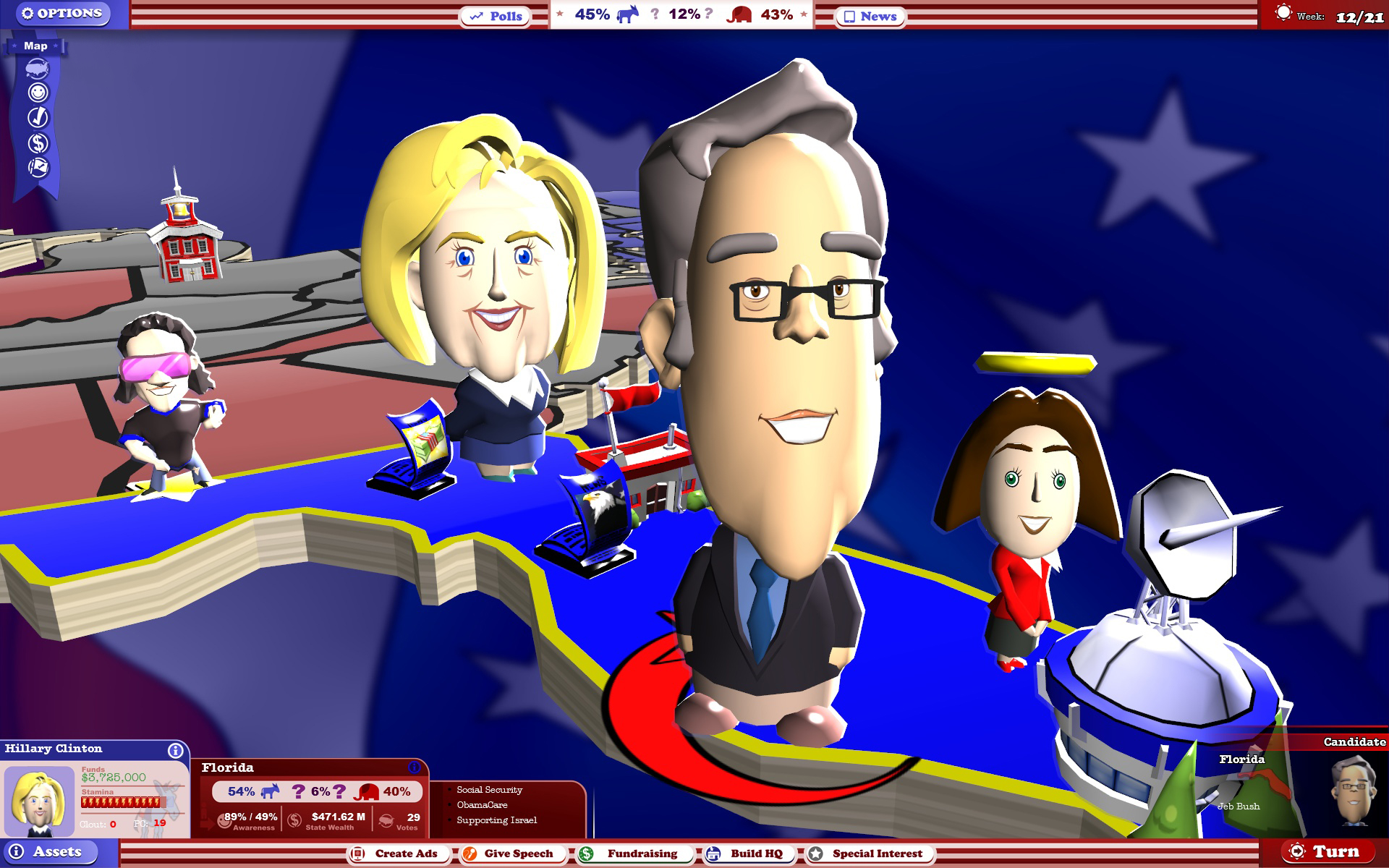 You can’t burn down the country without having a homebase to run back to. So I set out to build structures, like state headquarters, to earn bonuses for Robotic Elvis’s campaign in order to grow its assets and weekly totals. Structures have a wide array of uses and benefits: Building your own headquarters helps candidates gain income from states, consulting offices improved Robotic Elvis’s speeches and intimidated the competition, and outreach centers scored us some major endorsements.

In order to see what was working, I regularly checked the polls and adjusted Robotic Elvis’s strategy so that it would completely fail. Where’s the fun in winning? I had no real strategy. I flip-flopped on issues and made crazy decisions just to see what happened. Robotic Elvis didn’t care about winning, it just wanted make Trump’s life miserable and prove it had better hair. However, for gamers wanting to win, you could create a character similar to Robotic Elvis and just make smarter decisions. You might have to take a stance on some actual issues, but you could still have fun by sabotaging your competitors. The mob is also for hire in The Political Machine 2016, so that is definitely an option.

For me, it was more fun just to interview on shows like 60 Seconds and pick the worst possible answers to serious questions just to see what the headlines said afterward. The interview is basically a quick round of tough questions, and you only have mere seconds to respond to each one. An example question is “What should we do about our national debt?” My answer was to say that the debt didn’t exist and bring on the apocalypse. Robotic Elvis did take a stand on one issue that I recall–it would kill off all of the celebrities it didn’t like. So it was no surprise that the headlines would read that Robotic Elvis had lost its mind–and that, to me, meant it had been a good day.

In the end, The Political Machine 2016 taught me that politics can be fun and that maybe a robot for a president wouldn’t be half-bad. As you may have guessed, Robotic Elvis didn’t end up being President, but it was fun watching it try. Maybe next time, Robotic Elvis supporters!

Bottom Line: The Political Machine 2016 is a fun simulation game to play despite its serious subject matter and repetitiveness. On the plus-side, the game requires no real understanding of US politics to play – Robotic Elvis proved that.

Recommendation: Die-hard simulation fans will get a kick out of The Political Machine 2016, even if they only win the presidential race by a hair. (Pun intended)