Can ABC blend high fantasy drama with reality television? With The Quest, they’re giving it their best try.

I wondered how ABC was going to pull off the concept: an immersive reality game show with an actual story line. How seamless could it be? Would the contestants get it? Are they even called contestants? I’ll admit, beyond just wondering, I was downright skeptical. But then, on Wednesday afternoon, Whoopi Goldberg gave the show a seemingly genuine stamp of approval on her Facebook page and on The View, which gave me hope. Well, now that I’ve seen the premiere episode, I can happily say that The Quest is freakin’ awesome. Check out episodes of The Quest every Thursday night at 8/7c on ABC or on Hulu.

In last night’s premiere episode, we meet the twelve paladins who are sent to Everealm to compete in twelve challenges and ultimately defeat Verlox, the evil lord threatening the twelve kingdoms of Everealm. We meet Crio, liaison to the paladins, as well as the Three Fates, who summon and banish the paladins. In typical reality show style, last night the paladins competed in their first challenge — and of course, one was banished.

The production value is extraordinary. Every detail is finessed into fantastical strokes of verisimilitude. From the forest, to the clothing, to the smudged faces of the extras, it truly looks like these twelve human beings have stepped back in time to a magical world. Castle Saenctum looks like it could be in Eastern Europe somewhere, while the paladins’ chambers, which I’m guessing are a set, look one hundred percent authentic. As a viewer, I can be just as immersed as the contests — plus it shows how much the producers cared about making this more Lord of the Rings than Survivor. 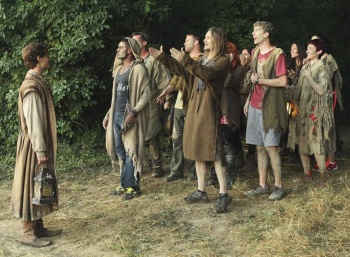 The only complicated part of the show, and this would be true of any show with as many imaginative undertakings as The Quest, is setting the scene. The paladins leave New York, walk through a series of catacombs, take a boat down an underground river, and trek through Marwood, the dark forest, all within ten minutes. Getting to Everealm appears pretty difficult, but none of that drama was shown in the premiere episode. After their journey, the paladins even emerged with clay-caked hair and different clothing. When did that happen?

One avoided pitfall was the use of fake names. In these kinds of narratives, one must be very careful with how many invented names one brings to the table. It’s difficult to sustain such nomenclature before things start to sound ridiculous. In The Quest’s premiere episode, we get a lot of made-up names fast: “Everealm”, “Crio”, and “Saenctum”, and “Sunspear”, “Marwood”, and “Verlox” among them. They’re not the greatest made-up names, to be sure. “Verlox” sounds like a vacuum cleaner company, while “Marwood” is obviously an ambiguation of “Mirkwood” from Middle-earth. It should be noted that producer Mark Ordesky was an executive producer on The Lord of the Rings, and some elements of the show certainly have a derivative feel.

Though I like “Everealm” because it sort of sounds like one of the “lands” at Disneyland — and further to that point, when the paladins take their fateful boat ride at the top of the show, it looks like they’re entering an amusement park ride, which would be pretty awesome. To live in an interactive Disneyland ride? Yes, please! But, then again, I’m a nerd. 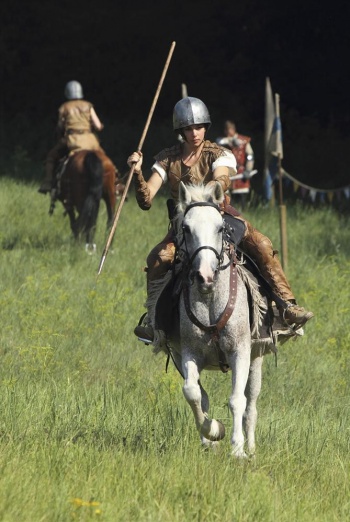 Which brings me to the contestants. You know what, god bless ’em. I don’t know why I didn’t expect this, but each of the twelve paladins is a symbol for the displaced outsider. One had deformed legs as a child. A number were bullied — one for reading all the time, others for their love of fantasy. One of the paladin’s mothers died of cancer, sending her son into the imaginary and healing world of fantasy and magic. Along with them, we also have a group of actual athletes, an MMA fighter among them.

Their reactions to the expertly constructed Everealm is reason enough to watch this show. Upon seeing Castle Saenctum for the first time, some of them actually start to cry. With every turn of the corner, we see them marvel at some new delight. For these twelve paladins, fantasy has been made reality. The worlds only in their imagination or on the pages of books, are suddenly before them, and they’re a part of these worlds. They’re meant to be there.

Not one of them desires to look behind the curtain, to see how it’s all working. These are not the type of people who want to know how the magic trick is performed — these are people who want to believe in magic. Their enthusiasm is adorable, and seeing their reactions to the unfolding realm around them really shows what this all means to them. The Quest exists to show that these people have never fit in anywhere, and now they finally do. It’s heartwarming, and we should all be so lucky.

Quickly about the premiere’s challenge: the twelve paladins had to split up into groups of three to hit unseen targets with arrows loaded into an apparatus called a scorpion. One paladin was in charge of the scorpion, another in charge of getting the arrows, and the third was the eyes, standing in a small tower guiding the two below. When the blue team fails the mission, the three paladins must then compete before the fates. One is saved in a quick fire challenge, while the remaining two are voted upon by the safe paladins. I was hoping they might spare the feelings of the potentially ousted by having a secret ballot, but alas, life in the forest doesn’t care for such pleasantries. The vote is public, and the paladins see exactly who did and didn’t vote for them. In last night’s premiere, Katie was voted to be banished. In a surreal moment, she walks through an invisible vortex and disappears, heading back to reality and into television obscurity.

All in all, I’m going to keep watching The Quest. As far as inter-paladin drama, there hasn’t been any so far, and from the previews it looks like there won’t be any, which is refreshing. It will be nice to watch a reality show that isn’t just about people fighting. There was one moment where the show made a big deal of pointing out that a man and woman would have to share a room. The tone and presumed controversy seemed asinine and juvenile, even antiquated. No one cares, ABC. No one cares. There is, however, potential controversy between the paladins when it comes to strengths. There seems to be a slight separation between those who are true athletes and those who compete with their minds, and these are likely to be big factors in voting — and winning.

I’m not a true nerd by any means. I’ve never played Dungeons and Dragons or seen an episode of The Walking Dead, but I’ve read The Lord of The Rings and The Silmarillion, and even went to San Diego Comic-Con back in the nineties when it was actually about comic books instead of celebrity-infested panels. More to the point, I’ve been the proverbial outsider, and to see a primetime, network show that celebrates the imaginations of us weirdoes is very cool.