To catch up on all the previous action, you can see the whole Twilight Imperium series here.

And now for something completely different. Ok, maybe it’s not that different, but this week a few folks are out of the office so we weren’t able to get a proper turn or two in worth writing up. Instead, I’m going to be dropping the server speech and silted write-ups of the Mindnet to analyze the board as I see it and what has lead us up to the current situation in the game. Just a fair warning, this is how I interpreted the events of the game thus far. My fellow players might disagree about some of the details.

As much as the game is centered on what’s currently happening, a lot of it traces back to beginning and the first few turns. Like many games, these opening moves have some rippling effect for turns much later down the line. Thus further gets fleshed out with the galaxy placement. While we may have slightly botched some of the placement rules, a number of key dynamics occurred because of our planetary placement and positioning.

Due to being hemmed in by impassible hexes, Paul, playing The Xxcha, was virtually assured to be in direct contention with Josh, Federation of Sol, over the course of the game. There’s just not enough planets to go around. This was only further exasperated by Josh and Janelle’s, The Yin Brotherhood, open alliance with each other. With only one front to defend, all of their resources could be directed at a single opponent. However, while the spacial anomalies cut off Paul’s routes of expansion, they likewise kept him relatively protected from Louis’s Sardakk N’orr. With Janelle in a very strong opening position flush with more nearby planets than anyone else, I leveraged my neighbor Tito, Jol-Nar, into an alliance that further divided the galaxy into smaller conflicts. Our six player game effectively broke down to each side fighting with only one of their neighbors – the Mindnet and Sardakk, Jol-Nar and Yin, and finally the Federation of Sol and the Xxcha. Some of this we’d come to find out was fueled by the player’s secret objectives. 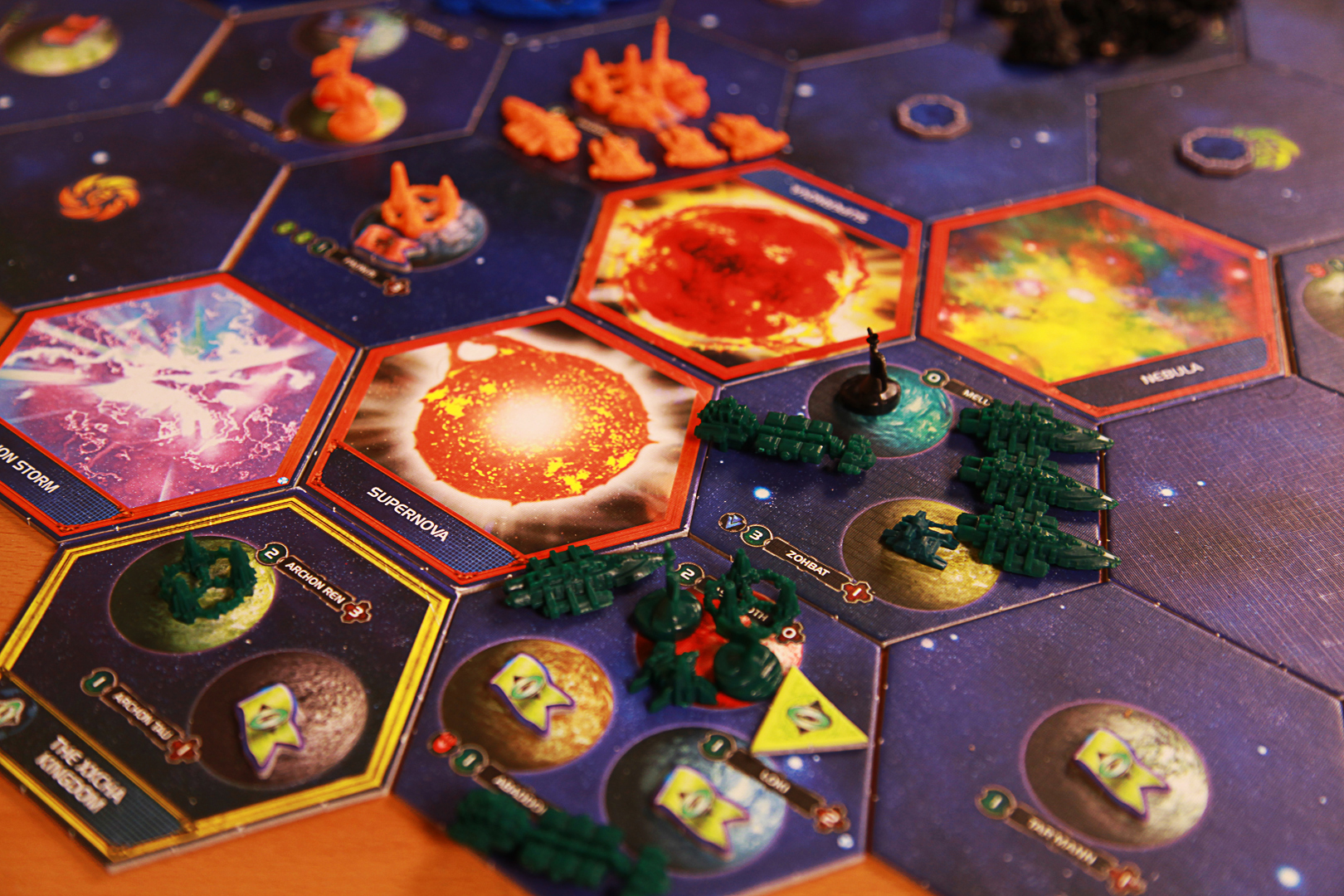 As the game progressed out of these initial skirmishes and expansions, the balances of power started to develop. The Xxcha were fighting a losing battle against the Federation of Sol. The Xxcha made some daring raids that crippled the Federation of Sol’s ability to produce for an entire turn, and they were staunchly holding a planet next to the Federation homeworld. But without making any lasting territorial grabs, the Xxcha were still economically weaker than the Federation, and eventually they leaned on that fact enough to force the Xxcha into non-aggression as other threats presented themselves. Personally, I felt like Paul needed to be much more aggressive earlier or precisely this was going to happen. Once Josh got ahead it was only going to get worse for him given Paul’s very anemic starting position. An extra five resources a turn doesn’t sound like a lot on the surface, but that’s a considerable advantage over several turns. During this time the Federation of Sol directed forces to capture Mecatol Rex, not surprising given how many secret objective involve holding it. 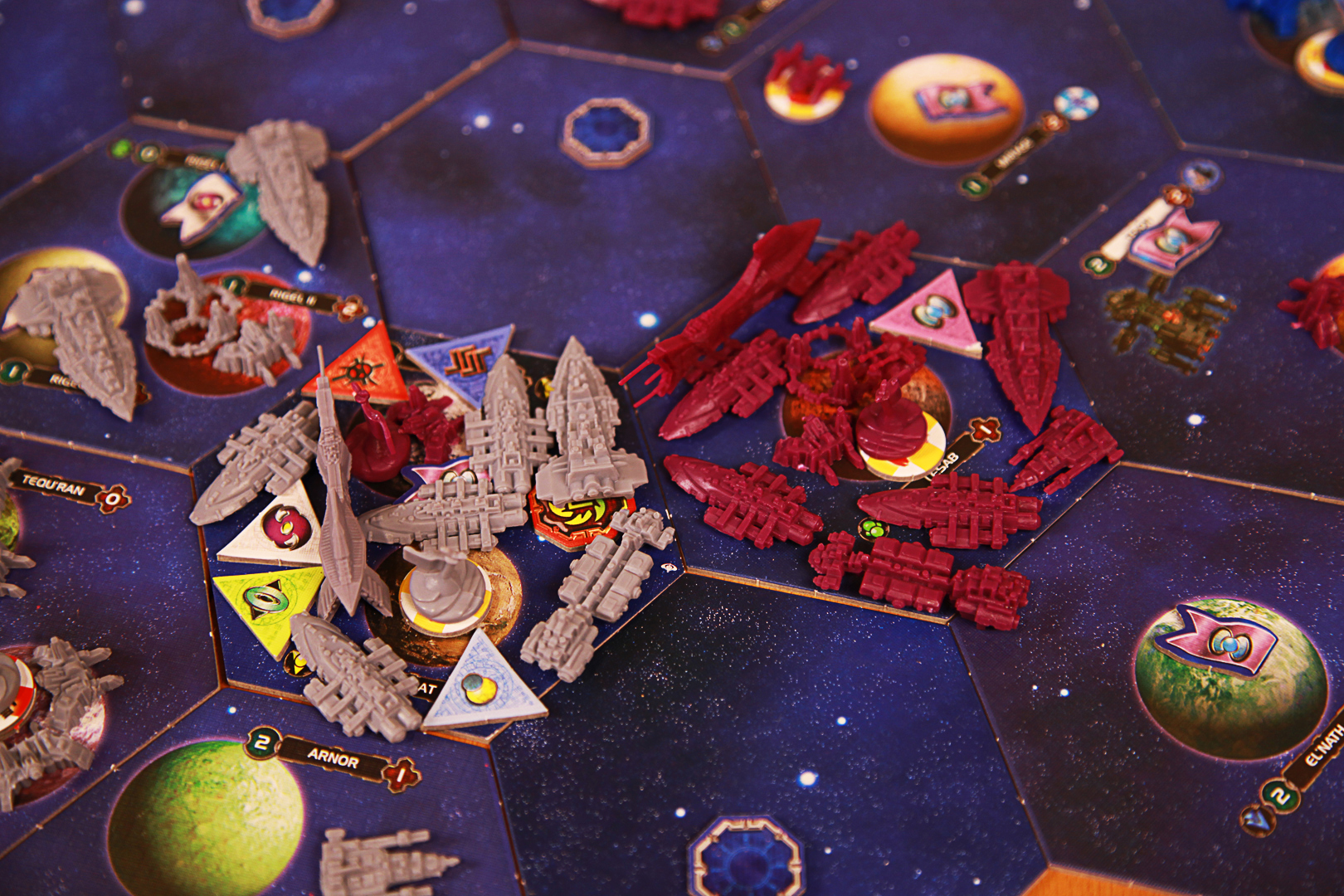 A short distance away, the Jol-Nar and Brotherhood of Yin were at a virtual standstill. Having spent the first several turns using his racial power to quickly tech up, the Jol-Nar had key technological advantages, but that resource drain meant they’d spent much less building up their fleet. The Brotherhood of the Yin was in contrast enjoying easily the best starting position of the game. The hexes surrounding their homeworld were rich with planets. It’s no surprise that later in the game Janelle quite literally has run out of units to produce. All of their fighting was centered on two systems, and these quickly became quite the meat grinder. One side might score some decisive battles, but ships were quickly rebuilt and sent to the line to reinforce. As silly as the idea of trench warfare in space would be, I could almost imagine their ships hiding behind little gravity anchored sandbags.

This just leaves the Mindnet and the Sardakk. The Sardakk were plagued with bad luck on their initial expansions, and due to my secret objective of conquering an enemy homeworld I was going to soon take advantage of this. The Mindnet had the exact opposite luck however, and through some expertly efficient play, cough cough, had quickly built up a large economy. Very quickly I had every dreadnaught on the board, and a combination of using the Warfare strategy and an action card to move again put my main fleet on the Sardakk home world in one fell turn. From this point on, I could simply bully what little remained of the Sardakk forces and further expand my empire by gobbling up their planets. A short few turns later and I had all of my major ships on the board, including building both of my War Suns in a single turn. With this massive fleet, I wiped out the Federation fleets at Mecatol Rex in a single combat round, before they could retreat, and exterminated the last of the Sardakk.

Like Icarus though, I flew too high too fast. 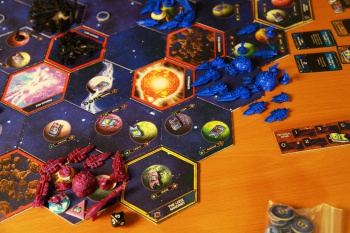 Big strategic games like Twilight Imperium are often governed by who the perceived or largest threat is, and I had brazenly aggroed the rest of the board. Everyone quickly pounced with a flurry of actions cards and movements to seize my territories and lock down my fleets. With my homeworld taken away I had lost the ability to claim objectives, effectively losing the game if I didn’t quickly retake it. Further complicating the environment is now we’re moving into the stage two public objectives, which are either worth more points or can simply win you the game outright.

As we transition into the final several turns of the game, everything is at a virtual knives edge. With the exception of the Xxcha, the rest of the players have moved within a few victory points of each other. However, the Bureaucracy strategy has already uncovered that holding two enemy home worlds with four ships will be an instant victory and another is looming pertaining to holding a large number of planets outside of your home systems. Players will need to vigilantly protect and deny the others from claiming the free wins, while also attempting to further grab victory points of their own. Join us next week as the game continues to spiral to its conclusion.