The story of Scottish game developer Realtime Worlds reads like a classic Greek drama. It begins with a charismatic leader who surprisingly orchestrated a successful campaign in Pacific City (Crackdown). The people were happy, and Dave Jones was crowned king with a strong supporting cast of advisors. Coffers full from the successful plundering of Pacific City ($50 million invested in 2008 and $101 million overall), King Jones built an empire that was far too big for it to maintain itself. All the money was spent on Jones’ second campaign in San Paro (APB) with the firm belief that it would not fail, that it could not fail. Factions developed within the empire and vied for control of its culture, and those in power could not stop the campaign from depleting all of the gold in the King’s treasury. When the second campaign did fail, it failed spectacularly, taking the empire of Realtime Worlds down with it.

In Greek drama, there is a chorus who is able to witness and comment on the tragic events portrayed on stage, but is ultimately powerless to alter them. Luke Halliwell was hired as a Senior Software Engineer at Realtime Worlds in 2004 as it was working on Crackdown. He was not a part of the design team, so in many ways he was able to watch the company grow and change better than those in power. When APB failed, Halliwell was among the first former employees of Realtime Worlds to understand just what went wrong.

“The biggest problem,” Halliwell told The Escapist in a recent interview, “was not with the business guys specifically, but with people, many of them in development, who felt we needed to imitate big corporations in order to become successful. They confused what success looks like after the fact, with how you become successful in the first place.”

Before the excess, Realtime Worlds was bright-eyed and full of promise. Dave Jones formed Realtime Worlds in 2002 with several of his colleagues who used to work for Striker developer, Rage Software. Setting up offices in the small Scottish town of Dundee, Jones had a great vision for the game that would end up being APB. The team was lean and hungry, and Jones inspired great work as they focused on making Crackdown. “We were really small and tight-knit back then – about 40 people I think – so everyone knew everyone,” Halliwell says. “Culture-wise we were just very focused on getting things done.”

Jones led a team with quiet words but everyone felt like they were in good hands. His inspiration was legendary; as if he was touched by the gods like a Greek hero. “We had Dave’s incredible vision for the future and it felt like we were racing towards it,” says Halliwell. “He was quietly spoken and understated, but at the same time capable of inspiring people with some pretty ambitious visions.”

The small size of the development team at Realtime Worlds allowed Jones to tinker with his game to make sure that it was good. “It was clear that Crackdown benefitted from having a much smaller team. I got the impression Dave could try out ideas in Crackdown faster than in APB,” Halliwell says, adding that a few, key members of the team like co-designer Billy Thomson were able to challenge Jones to refine his ideas, strengthening the final product.

“[Dave’s] relationship with Billy Thomson was good for the game. Billy was an incredibly no-nonsense guy and had known Dave for a long time, so I suspect he was more able to speak his mind. I think, at times, some of the APB team made the mistake of trying to say what they thought Dave wanted to hear.” After Crackdown, Thomson left Realtime Worlds to form Ruffian Games and work on Crackdown 2.

Crackdown sold a respectable 1.5 million copies in its first six months and went on to win several BAFTA awards including Best Action & Adventure and Use of Audio. All of the awards and critical acclaim were seen as a proof of concept for Dave Jones and Realtime Worlds. A consortium of venture capital firms invested more than $50 million in the company so that Jones could create his ultimate vision, the MMO that would be APB.

Halliwell now sees that event as the turning point; the climax of the tragic fall of Dave Jones’ company. “For a long time, Realtime Worlds cultivated an air of success about the office,” wrote Halliwell on his blog in September 2010. “Raising $100 million sounds pretty cool on paper. We all walked past the Crackdown awards cabinet each morning. The press was excited about APB and we had Dave, who apparently could do no wrong.”

“But after the investment, we lost our scrappy startup mentality and used our money to build this highly ‘corporate’ culture, mimicking an established, successful organization. We forgot to tell ourselves that the investment was just a small step towards success, not to be confused with success itself.” 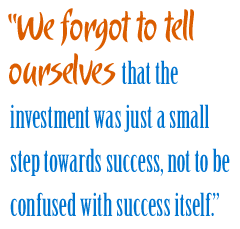 The team working on APB grew exponentially simply because it could. Jones hired designers, producers, and artists and then people to manage them. Then more people were hired to manage the managers. “Almost everything we did,” Halliwell wrote, “we sought to throw people at and our hiring created inefficiencies all over the place.”

The examples of such inefficiencies read like a play by the comic Greek playwright Aristophanes meant to satirize modern business practices. “We hired a ‘live production’ team, whose entire job seemed to be to pass messages between operations (the folks who run the servers) and engineering, on the basis that these two groups were struggling to communicate,” Halliwell wrote. “Unfortunately, they struggled to communicate with either group, and spent a lot of time creating processes for how to pass these messages around.”

All of this inefficiency created a division at Realtime Worlds, two diametrically opposed factions like Spartans and Athenians. The “Reds” were obsessed with running the company just like many other “successful” game companies had be run, or as Halliwell put it: “Lazily imitating big companies in a superficial way, at the expense of critical thinking and focusing on our true goals.” Working against the Reds were the Blues, who wanted none of those trappings and just wanted to make a great game. “While the Reds relished the meetings and political fighting, the Blues were passionate about getting on with real work, about making our product better, and for the most part gave up the fight to focus on that.”

Dave Jones either was not aware that this was happening or did nothing to stop it. He was just trying to make a good game, and, like a Greek hero, was overly confident in his abilities. He believed that he would pull out a hit, just as he did with Crackdown. APB had flaws in its design, but the real reason that it failed was that Realtime Worlds was blind to the all of the inefficiency leading up to its release. “The business guys forced us to throw a load of contractors at APB to try and get it finished faster,” Halliwell says. “We found a couple of good people but I’m not convinced adding people at that stage is the way to finish faster, and the hiring drive was a distraction.”

Despite the huge investment of venture capital, it was fantastically difficult for Halliwell to get permission to spend money when it was actually warranted. “We cut all conference visits for my last 18 months there – a paltry amount next to our salary bill. I spent three months arguing to upgrade some of the APB developers’ PCs in the name of working more efficiently,” Halliwell wrote. He couldn’t even get a bulletin board without getting the CFO’s opinion. “I had to wait two months for a pinboard because everything went for approval to the very top level for a while, apparently to help get a grip on our spending.”

The finance team even wanted to cut the complimentary bowls of fruit in the company pantry in the name of saving money, all while justifying their own ballooning salaries. “We had a problematic relationship between ‘business’ and ‘development,’ for sure,” Halliwell says.

By 2010, buzz was building around APB, and Realtime Worlds felt that it needed to ride that train as far as it could. Instead of spending time to fix any niggling design problems, the developers forged ahead, betting instead the game would be a massive hit and that whatever problems existed could be fixed after launch. “We spent excessive amounts on the APB server setup, in anticipation of large player numbers,” Halliwell explains. “I guess we’d spent so much that our only chance of success was a huge launch, so we just planned for that.”

The huge launch didn’t happen. After five years of development, APB launched on June 29th, 2010. Critics generally panned it and players complained of its incredible imbalance and horrible exploits that broke the economy. People bought it though, and there was a population that logged in everyday, but it was not enough to save its creator. Six weeks after the launch, Realtime Worlds entered administration, and began shopping itself around. Unfortunately, no buyer wanted to purchase Realtime Worlds while APB was still running, and the servers shut down completely on September 16th. Everyone at Realtime Worlds lost their jobs, either to relocate as Luke Halliwell did by joining Dreamworks Animation as a software engineer or to attempt to form new game studios in Dundee. Realtime Worlds still languishes in administration, hoping for an angel to save it.

The great tragedians of the Classical era wrote plays in which the gifted and successful hero possesses a tragic flaw that ultimately leads to his or her demise. Chief among these flaws is that of hubris, or arrogance and pride. While Dave Jones was undoubtedly gifted, as Crackdown proved, he apparently let the success infect him, surrounding himself with sycophants who told him what he wanted to hear. All the while, his company grew fat on a huge influx of cash and lost the exact qualities of experimentation and hunger that made Crackdown successful in the first place. As Greek chorus, Luke Halliwell was able to see the drama unfold first hand and his commentary gives us, the audience, a sense of what the tragic fall of Dave Jones and Realtime Worlds looked like from onstage. And like any tragedy, from the collapse of a game studio to a car wreck to a well-acted rendition of Oedipus Rex, it’s impossible for us to stop watching the fall. We just can’t look away.

Greg Tito has been waiting for the perfect opportunity to use all of the knowledge he gained from the theater history classes he slept through in college.