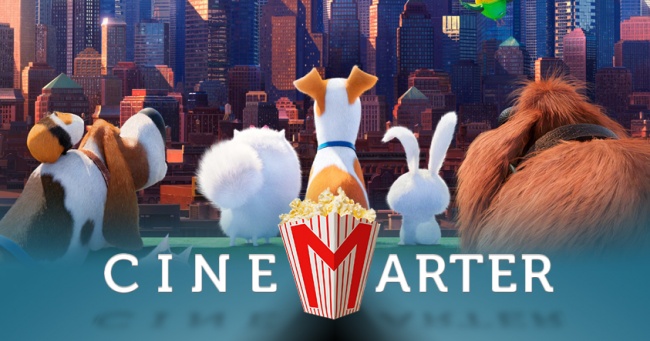 As is frequently but not always the case when it comes to animated movies, an unrelated short by the same studio plays before The Secret Life of Pets. It’s a short featuring the Minions, because the animation studio is Illumination Entertainment, which has decided that those dastardly little creatures will become the only things for which it’s known. It’s a terrible short – probably worse than the feature-length film – and doesn’t put you in a very good place before watching the main movie.

The feature has a decent premise, which you might have seen based on the trailers. When pet owners leave for the day – for work, school, or whatever – the pets start to play. Many of them act more like humans than animals, and they can all communicate with one another, because animals in movies can do that. We see dogs that watch telenovelas, cats that eat meals designed for four people, birds that pretend to fly with jet planes, and a whole host of animals who party like they’re living in Flo Rida’s house. When the owners return, the pets resume acting like, well, pets. 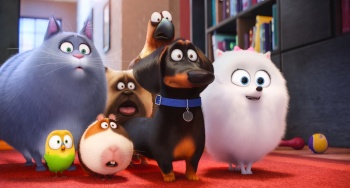 You may be sensing some deja vu, assuming you’ve seen this other little-known animated movie called Toy Story. It’s the same type of deal, except we’ve replaced toys with animals. Want more similarities? Try looking at the plot. Our protagonist is Max (voice of Louis C.K.), a dog who thinks he and his owner (Ellie Kemper) will live together in harmony forever. But when she adopts a new dog, Duke (Eric Stonestreet), he feels protective of his territory and immediately begins feuding with the larger newcomer. Because of this war, the two wind up getting lost in the big city of New York, separated from their friends – who soon launch a campaign to locate them – and owner, able to rely only on each other for survival. So, yes, it’s Toy Story with animals.

The villain is a rabbit named Snowball (Kevin Hart) who leads a gang of animals who live in the sewer – the “Flushed Pets” – who were abandoned by their owners. This is not dissimilar to a plotline in the third Toy Story movie. I guess I understand why Illumination is riding the Minions train this hard; coming up with new ideas is hard. It’s easier to stick with something you know, which in the studio’s case is either yellow gibberish-talking annoyances or ripping off Pixar.

The Secret Life of Pets feels like one of those hour-long ripoffs you’d see on a children’s television network that would play a few times a year and would be hyped as an “event.”

Unfortunately, the filmmakers didn’t do a good job of copying what made Toy Story great. Firstly, there’s nothing special about the animation. The backgrounds look better than the characters, the humans are ugly and disproportionately shaped, and the animals all look goofy. Almost all of the characters are annoying, shallow as a wading pool, or both. The conflict between the two main dogs doesn’t work because there’s almost nothing to any of them. Max’s friends decide to try to find him because his neighbor, Gidget (Jenny Slate), is in love with him – the sole defining characteristic she’s afforded. Snowball hates people and … that’s it. There’s no reason given to care about any of their plights except that they’re cute little animals, and therefore we have to care, right? Well, no. No, we don’t.

Even the vocal work isn’t anything more than adequate. Louis C.K. in the lead sounds bored, as does Eric Stonestreet as his theoretical foil. Kevin Hart is hyperactive and annoying, and most of the supporting cast members – including the likes of Bobby Moynihan, Lake Bell, Dana Carvey, Hannibal Buress, Albert Brooks, and Steve Coogan – aren’t given enough to do to leave much of an impression. The studio hired good actors for the roles; the actors just weren’t given much to work with.

The Secret Life of Pets feels like one of those hour-long ripoffs you’d see on a children’s television network that would play a few times a year and would be hyped as an “event.” It’s barely feature-length in running time, and it’s essentially a very poor Toy Story knockoff, but with animals in the place of toys. Bland animation, bored voice work, annoying and thin characters, and no laughs, The Secret Life of Pets is a failure of an animated movie.

Bottom Line: A TV movie-quality feature at best, The Secret Life of Pets is a Toy Story ripoff we didn’t need.

Recommendation: This’ll be playing on repeat in a couple of years on free children’s TV channels. Wait until then to see it, if you must see it at all.