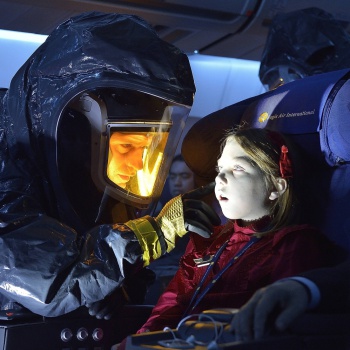 When Game of Thrones and Fargo finished their recent runs I was grasping for a new summer series to hold my attention. The Leftovers didn’t fit the bill and the return of 24 hasn’t done it for me either. Legends of Korra has come back strong and Extant has intrigued me, but I’ve been looking for something more. After watching the premiere of The Strain (Sundays @ 10pm on FX), I think I may have found it.

Guillermo Del Toro, writer and director of Pacific Rim, Pan’s Labyrinth and the Hellboy movies, executive produces, directs and writes for this FX series based on a trilogy of books written by both himself and Chuck Hogan — and it shows. The pilot episode’s pacing and cinematography were top notch. The dialogue was…passable, but solid acting made up for that, especially with actor David Bradley of Game of Thrones and Harry Potter fame chewing up the scenery as an aging monster hunter facing a threat he thought long past. The show also offers a heavy dose of science in its vampire mythology — just hinted at in this in the episode’s creepier (and sometimes campier) scenes. But the overall feel of the show is one of solid entertainment that delivers on its promise of chills, suspense and the occasional humorous moment mixed with some camp for good measure.

The series opens with a flight from Berlin to JFK with something loud bumping around the cargo hold. It bursts forth into the cabin and the next thing we know, the plane has landed itself with no radio contact. Fearing a terrorist attack, every emergency federal agency available is called, though the Center for Disease Control it seems gets first crack. The hero of our story is Dr. Ephraim Goodweather, played by Corey Stoll recently of House of Cards fame, who is pleading his case in family counseling to keep his marriage together despite his workaholic tendencies. Unfortunately, the call to the plane crisis comes during his latest counseling session and he must leave. Thus we have established the-brilliant-investigator-who-sacrifices-his-personal-life-for-his-job character that is pretty standard for these shows.

On the tarmac we meet his crew: Dr. Nora Martinez, the somehow-hot-but-brilliant right hand woman played by Mia Maestro (whom Eph had an affair with during his marriage) and his trusted assistant played by the dependable Sean “I’ll never leave you, Frodo!” Astin. Inside the plane, Eph and Nora find everyone dead, but with no apparent trauma. So they decide to break the number one rule of horror: never split up. Nora heads to the cockpit while Eph checks out the cargo hold. And that’s when a few of the corpses come back to gasping, jerking, stuttering life. Turns out four of the victims are now alive while the other 200+ passengers and crew remain dead. The survivors are the pilot, a lawyer, a goth rock star and a nondescript nerdy guy. Those four go into quarantine while the rest of the bodies get shipped to the coroner. 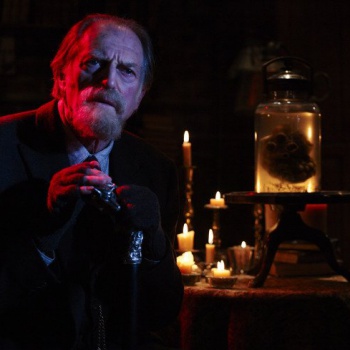 We also meet Abraham Setrakian, a cranky old man who easily disarms and threatens a pair of local thugs that try to rob his pawn shop. Apparently he is known for paying well for silver. After seeing the plane on the news he heads into a secret back room and we discover what he does with all that metal. He has crafted a sword with a long thin blade that is easily hidden in an unremarkable cane — except for the elaborate wolfshead handle. He then monologues his inner thoughts while sitting in front of a jar filled with a severed heart floating in yellowish fluid. “He’s back.” He pierces his finger and holds it over the jar so his blood drops into the liquid and long thin worms wiggle out of the heart to drink it up. Yeah…

We also meet another old man, this one much wealthier, receiving dialysis in a high rise office. He is met by a man who doesn’t breathe to be informed that plans are proceeding apace. Muhahaha! Sorry, this scene was very stereotypical and felt right out of a Tim Burton Batman movie. That’s not a compliment for those keeping score at home. 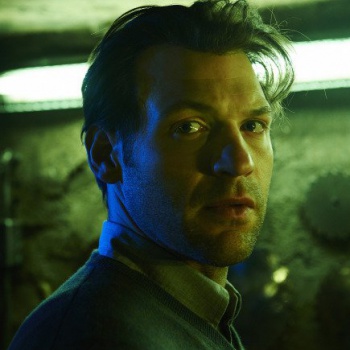 Back at the airport, our intrepid team of investigators have found an enormous engraved wooden coffin with a latch on the inside (dun dun dun!) that was in the cargo hold yet doesn’t appear on the manifest. They crack it open to discover it’s full of dirt, but nothing else. That’s because the evil inside has already escaped into the airport hangar and attacks a man, shooting tentacles from its body to latch onto the poor victim’s jugular and drain him of all blood. Then, for good measure, it breaks the man’s neck and proceeds to violently smash his skull into mush The Mountain-style. Is this like breaking the plates after eating a good meal? Crazy old world customs!

Meanwhile, Eph must talk to the families of the victims to assure them everything is being done to understand what killed the passengers, but instead gets stuck facing the media. He tries to sugar coat things…for about two seconds, then bluntly tells them they haven’t a clue, but promises answers in 48 hours. Abraham finds Eph and tries to warn him to burn all the bodies including the survivors as well as to burn the coffin, but Eph blows him off. Abraham weakly warns him not to let the coffin cross the river into Manhattan. Heading to the cargo hold of the plane, Eph and Nora find one of the long, stringy worms alive and capture it for further study.

Creepy no-breathing vampire dude hires a local thug to drive a van with the coffin in it into Manhattan before sunrise. When the macho, posturing thug (this is the best they could do with such precious cargo?) claims he’ll never get past security, the vampire gives him a business card with the rich old man’s company logo on it, telling him to use that. Sure enough, the van is stopped, but when the thug flashes the business card to security they merely look at it and say “What am I supposed to do with this?” The thug reaches for his gun, but then good ol’ dependable Sam, uh Sean Astin, shows up, sees the card and orders security to let the van pass telling the drive to let his bosses know he’s done doing favors. Oh, Sam, you were supposed to be trustworthy until the end of days.

Back in the autopsy room, the coroner is a) alone, b) at night and c) with loudly playing classic rock on the radio. I think we all know where this is headed. Cutting open the bodies of the plane passengers and crew, he finds worms crawling out of a heart. One of those wigglies gets on his hand and under his skin, but he manages to pull it out in time. Fascinated by the creature, he fails to see that all the cadavers have risen until they descend on him for a late night snack.

Finally, we end at a quiet house at night. The father of a little girl who was found dead on the plane arrives home tired and defeated after getting no answers about the fate of his daughter. But, wait, there she is at the back door letting herself in. He can’t believe what he’s seeing and embraces her, not noticing the pale skin, vacuous eyes and stilted gait. A voiceover from Abraham tells us that love will always guide loved ones back home… Apparently to infect their family with zombie-causing worms.

On a mythology level there seems to be a bit of a mashup of horror tropes here. While the Master Vampire is clearly some inhuman creature of the dark, he can insert worms into humans that can turn them into either intelligent, coordinated vampires or brainless, shambling, brain-eating zombies that will turn their victims, presumably, into one as well. We know it can’t stand sunlight, but can be killed by silver (implied by Abraham’s cane) which is a classic bane to werewolves. Not that I’m complaining — I’m all for new ideas in old stories and it will be interesting to see how this mythology evolves over the course of the season.

This is, at heart, an apocalypse story and it hits all the right beats so far. A spreading horror that will destabilize humanity, a major city to be ground zero and an earnest hero that is determined to get to the bottom of it and find the key to stopping it (though science!). Previews for future episodes show things get badly out of hand so good times are ahead as we watch humanity grapple with this ancient threat.

As I mentioned at the top, all the elements come together for a series that promises some solid summer entertainment. It won’t have the gravitas of Game of Thrones, but neither does it skid into the camp of True Blood or watered-down attempts at cinema-style genre storytelling the big broadcasters are well known for. If you are a fan of horror, you’ll be in good hands with The Strain‘s mix of shock, intrigue and mythology.