It’s shocking just how incoherent The Surge 2 is. What starts as a promising update to Deck13’s dismemberment-centric Souls-like series steadily devolves into an unfinished, incomprehensible mess.

Rather than settle for one type of third-person melee combat, The Surge 2 crams them all in. One moment, it’s a proper Souls-like with slow encounters against one or two opponents. Then it’s a spectacle fighter like Devil May Cry with a secondary pistol weapon and gigantic fighting arenas. Then it’s an action RPG like Diablo where stats matter more than actually understanding your opponents.

The camera breaks in boss fights and often struggles in tighter environments, wildly zooming in and out. Enemies don’t pose nearly enough of a threat unless they’ve got a clear statistical advantage. Later on, not even stats stopped me from beating significantly higher-level opponents. That’s not me bragging, but a serious concern about how The Surge 2’s own health system is balanced. 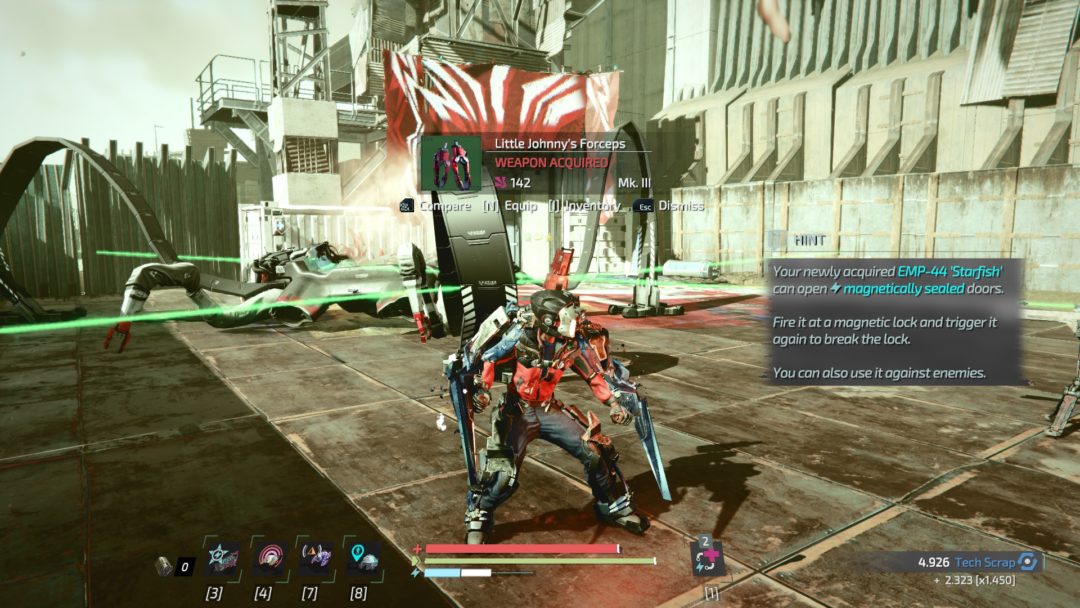 Characters earn medical injections (aka health packs) by generating battery charges, which are initially earned by striking enemies. In both Surge games, you have access to modular upgrades you can swap out on the fly, called implants. Several of The Surge 2’s early implants allow you to also earn battery energy for being hit or dismembering enemies. Another implant grants health regeneration for building up batteries. This means you are constantly feeding yourself more health, to the point the health bar becomes irrelevant. After this point, death mostly comes from stun-locking enemies rather than player error. This appears to be a balancing oversight that made me feel like I was cheating.

The progression system further rewards sticking with your first pieces of gear rather than changing things up. You just repeatedly upgrade your favorite items by cutting corresponding limbs off opponents. Shops rarely sell anything of value, and there’s little benefit in selling items to them for a meager amount of experience points. You can always earn more experience by culling an area for five minutes, which is made easy by an early-game dual-rigged nanite weapon that melts opponents so fast I legitimately wondered if I’d found endgame gear by mistake.

After I acquired this nanite weapon, every other implement in the game became useless. Pairing it with a suit of armor that removed the cost of battery energy for executing enemies meant I never needed to look at my gear tab ever again. Once you have enough of each upgrade material, you can stop dismembering enemies until you face an opponent of a new rank, meaning you’ll spend plenty of time ignoring the game’s central mechanic. 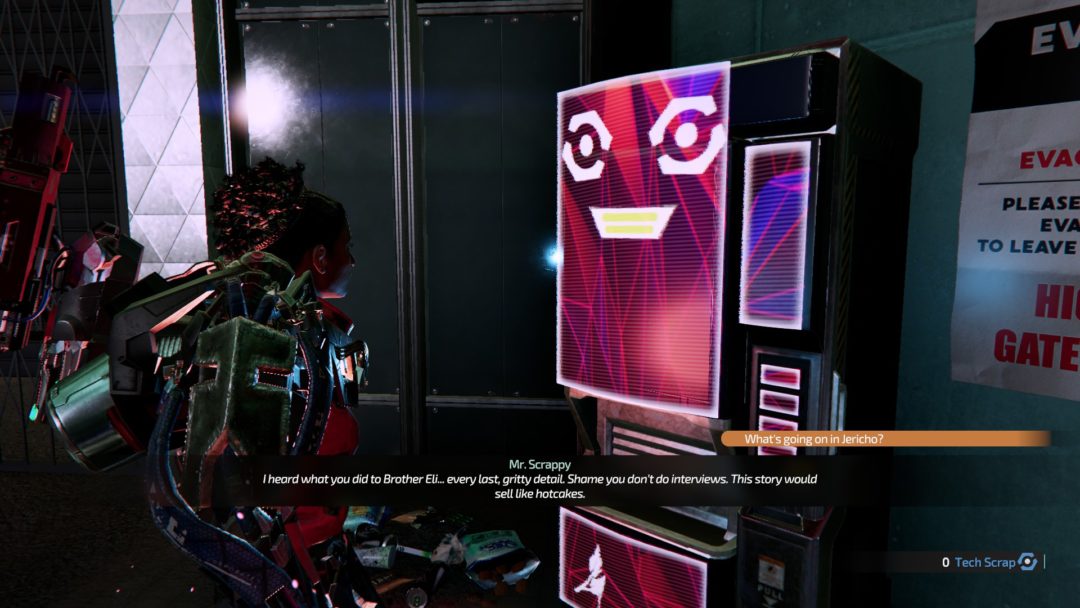 The Surge 2 is nowhere near pleasant enough to warrant engaging with it. The story offers almost no motivation to keep going. Some sidequests at least pose a unique challenge, such as racing against the clock to recover vital medicine from an enemy camp. But most devolve into questionable tropes like a crazed southern woman who chews people up for meat she sells Sweeney Todd-style.

Your mute, customizable protagonist is equally bland. Almost anything you do, even with good intentions, makes the world worse. It paints your efforts as so nihilistically pointless; you just can’t care about the story or your choices. A young girl you track down is the real center of attention, but we have no reason to care about her either. After you both survive a plane crash, your character starts having visions of the girl’s journey in the form of “echoes,” temporal imprints on the world that only you can see. Everyone speaks vaguely about how the girl’s important, but there’s no real hook. It’s like the worst of J.J. Abrams’ mystery box storytelling, without the benefit of decent actors to carry the plot along.

There are glimmers of a better game here. You can find secrets, including bonus loot caches and shortcuts that substantially cut down on travel time. The ability to leave spray-painted messages for other players is much more useful than the vague warnings in Dark Souls. Your drone companion is wonderfully versatile too, serving you well in combat and exploration, especially after an early upgrade. There are a handful of other charming characters, such as an adorable robot gardener and a sentient vending machine. You can also find unique fights if you pay attention, but they’re few and far between. 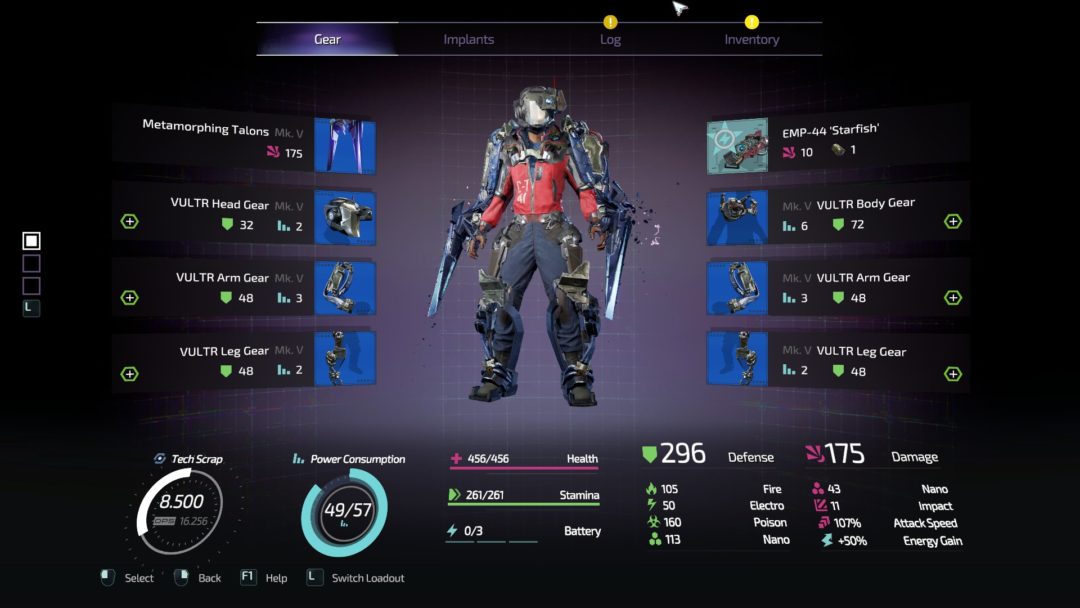 The Surge 2 is riddled with bugs as well. Textures flicker, AI locks in place, and the lighting engine refuses to work. I actually missed the route to the first boss’s arena because the walkway was pitch black. It’s also possible to accidentally untarget limbs by moving your mouse to shift the camera angle. This is a single-player game that barely incorporates online elements, yet it freezes when it loses internet connection for a second. The only way to avoid this is to permanently play in offline mode, which means you won’t spot the hints from other players. Some glitches at launch are understandable, but The Surge 2 clearly should have been delayed.

The design is so warped that core lessons of the Souls-like genre like blocking, countering, and strategic positioning are often discouraged wholesale. I spent most of The Surge 2 as a rogue who could tank thousands of hits. That’s something I’d expect from God of War, not Dark Souls.

The Surge 2 is a mostly playable wreck. It might whet the appetite of Souls-like fans, but it’s likely to leave you wanting. Many of the game’s major gameplay hooks don’t fully come together or feel redundant. I can’t even tell you what the point of The Surge 2 is. There are a mountain of potential threads it could choose to focus on, but instead, it spreads itself out to the point of irrelevance. Rather than being a bigger and better version of The Surge, The Surge 2 swallows the series’s potential.

I had a different conclusion in mind for my closing thoughts on The Surge 2 until I looked up the game’s intro on YouTube to refresh my memory. That’s when I saw a critical narrative introduction that I never had the chance to play. You wander around on a plane and meet the young girl, Athena, learning why you’re supposed to care about her. This didn’t make sense. Had I remembered things wrong? No. The Surge 2 just didn’t play this for me due to another glitch.

There’s more that I could talk about like the game’s tedious tacked-on spiritual themes or bosses with wildly inconsistent hitboxes, but what’s the point? At its very best, The Surge 2 is little more than a time sink that doesn’t stand out in the sea of open world games. I appreciate what Deck13 is aiming for, but they have to narrow their focus with their projects. Do yourself a favor, and skip The Surge 2.