There is a healthy subgenre of games that use music not as decoration, but as the central mechanic of play. These all imagine music in a different way, but there are some similarities – almost all games, in translating audio to video, portray music as color. In hybrid music-shooter Rez, it becomes a synaesthetic lightshow, filling the screen with nebulas of pulsing energy as you mow through enemies to a thudding trance soundtrack. In the Bit.Trip games, the retro beeps and bloops of chiptune music become a rain of bright, bouncy pixels that shimmer across the screen. And in Guitar Hero‘s time-tested formula, colored notes translate to colored buttons, giving a sense of analogous performance as you clack along. This full-spectrum thinking is so common, that there’s a certain delight in finding a rhythm game like NanaOn-Sha’s Vib-Ribbon. Standing outside this rainbow of rhythm titles, Vib-Ribbon is content to paint it black. 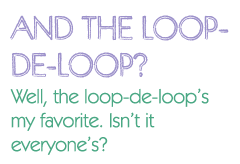 Vib-Ribbon was released in Japan and Europe on the PlayStation, but at first glance it would seem more at home on a beat up old Atari scavenged from your uncle’s garage. The game consists of thin, white lines on a black field. It begins by showing a series of hollow squares that stretch and squash to form thin, horizontal lines – then, there is the sound of a swelling orchestral score, and the lines twang and vibrate in turn. The game is not so much turning on as tuning up. Quickly, these lines converge to form Vibri, a sprightly, rabbity figure, who skips along and sings a chip-tunish ditty. The style is Doo Wop, the only genre of music that speaks exactly as it sounds, and Vibri belts it out: A-ba-ba-dum-diddy-dum. A shoobie-doobie-doobie-doo-waa. This is a strong hint of where the game will take us – only ten seconds in, and already it’s into the shoobie doobie doobies.

This graphical economy springs from a technical problem – Vib-Ribbon was designed to work with whatever musical CD you liked, a spot normally reserved for the game disc itself. The solution was to create a vector-graphics game small enough to load entirely into the system’s memory, freeing up the system’s disc slot for a CD of whatever tunes tickle your fancy. The gameplay follows Vibri as she leaps, loops, tumbles and stretches across a literal manifestation of the musical “track” – the “vib-ribbon” of the game’s title. Besides setting the tempo, the music’s ups and downs are translated into a set of obstacles – a deep, V shaped pit, a tall rectangular block, a set of zig-zagging spikes, and a loop-de-loop. It’s amazing how these pitfalls comprise a videogame shorthand – this is all familiar terrain. The block stands tall and inviolate, not something you’d like to plow through. The spikes are as jagged and unfriendly as any that have robbed countless lives from countless avatars. And the loop-de-loop? Well, the loop-de-loop’s my favorite. Isn’t it everyone’s?

But despite looking like a game from the Asteroids-era, this vector aesthetic never seems outdated or crude. Vib-Ribbon has good graphics, in the sense that they perfectly suit the game. Rather than seeming stiff, or unplayable, this simple animation has looseness and a lightness of form. Polygons snap and contract to the beat as if strummed by an invisible hand. In later levels, the track itself begins bouncing around, winding back on itself, forcing the player to trace that winding line to the musical tempo to prepare for upcoming obstacles. Through all this, there is the sense that Vibri and the track she skips along are make of the same stuff – collide headlong into any obstacle, and everything begins to jangle up like a sour note, losing its form and coherence. Fumble too much, and Vibri begins to break down, devolving from leporine humanoid into a monkey, then a frog, then a snake. It is not a lineage that would pass muster with Darwin, but here, it works. Vibri’s effortless vim communicates something fundamental to many of NanaOn-Sha’s games – that beyond everything, music is a pleasure in itself.

Certainly, earlier NanaOn-Sha titles like PaRappa the Rapper and Um Jammer Lammy embrace this music-is-everything philosophy. In Lammy, every action, from kung-fu fighting to piloting an airplane is performed by playing a song on the guitar. Play poorly, and the world begins to fall apart like so many props – the music fades, the lights dim. Play well, and everything disappears entirely – all that’s left is swirling tie-dye backgrounds, the world transformed through funk into Hendrixian psychedelia. But Vib-Ribbon‘s stripped-down aesthetic seems to take these ideas of music a step further by turning the standard model of rhythm gaming on its head. Vib-Ribbon moves past the standard way of thinking of music-in-games, giving us instead a game-inside-music. The game’s ever-twanging vib-ribbon works as a visual metaphor for the ways in which the system contains the playable CD, and in which Vibri inhabits each looping musical track. I can’t help but imagine Vibri as a microscopic figure within the system itself, leaping and jumping along the CD’s grooves as the music plays. It’s a big idea for such a digitally small game – the notion that with only a touch of creativity and design, something joyous could, with a little nudge, turn into gaming and into play. Music already has us wanting to get up and move. Why not harness that verve, and take it for a ride? 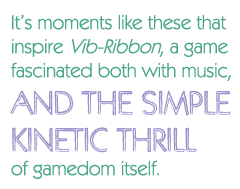 All of this lines-to-music thinking eventually becomes an end in itself. Though the first levels consist only of the familiar blocks, spikes and pits, soon these symbols begin to mix themselves up, into less-recognizable forms. There are zig-zagging pits. Raised blocks with spikes on top. Loop-de-loops with a pit in the center. You’re required to recognize these advanced traps as combinations of now-familiar icons. Here, the simple videogame actions of leaping, tumbling and ducking become codified, containing their abstracted meaning if not their literal fact. To someone new to the game, it would seem like meaningless scribbles across the screen. But to the trained eye, they serve as something else: a notation.

At this point, the vib-ribbon is reminiscent of nothing so much as the physical score for a piece of music, albeit written out in a gamer’s code of jumps and rolls rather than a signature of sharps and flats. There is that same shift of perspective. When dealing with musical notation, a musician might look at a few bars and instantly recognize Brahms, Beethoven, or Beatles, when the rest of us are stuck gawking at scribbles – it may as well be Swahili. The gist of it is there – we might trace the lines up and down, see stretches of quiet and flurries of activity, and get some sense of the range of the piece. But it isn’t until that moment of performance when it is translated into something recognizable, even universal – the moment it becomes song. In the same way, a gamer might look at an extended level full of ledges, spikes and pits, and already have an exit strategy in mind: hop, jump, roll, tumble, out. It’s moments like these that inspire Vib-Ribbon, a game fascinated both with music, and the simple kinetic thrill of gamedom itself.

Vib-Ribbon may not communicate music through the brilliant pyrotechnics of other rhythm games, but it speaks in a language all its own. It may be a game in black-and-white, but it is not without color. Lines become song. A song becomes a game. In Vib-Ribbon, music is something conjured from nothing, a thin white line struck across a black field. Something simple but animate, with a life unto itself. Something that jumps for joy.

Brendan Main hails from the frosty reaches of Canada, where they don’t actually have snakes: St. Patrick chased them all away. He will see your dum-diddy-dum, and raise you a shoobie-doobie-doobie-doo-waa.

Shooting for the Sky