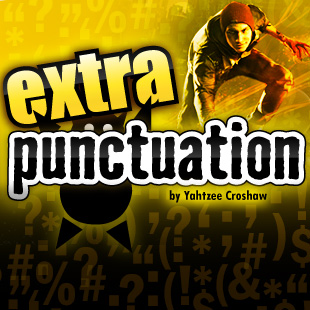 On the outset, the concept of the inFamous games is that there is such a thing as a ‘conduit’, a superhuman with the ability to absorb a specific element and use it as they please. Cole MacGrath in the first two games was Mr. Electropants, he used bolts of lightning offensively and could fly by some process probably involving magnetism. Other people had powers over ice and fire and stuff like that. That all made sense, broadly speaking.

When a game introduces a concept like elemental powers – ‘elemental’ being a rather misleading term in these cases, a better word may be ‘thing’ or ‘stuff’ – they usually stick to the classics. Fire, water, ice, lightning, plant, holy, dark, all of that business. And we usually stick to these because it’s immediately intuitive how they all work. Water kills fire, fire kills plant, holy kills dark, all of that. It’s fairly tired, but that’s because it makes sense. You might as well argue that pushing up to move forward is tired.

inFamous: Second Son was far too cool and edgy and hipster to stick to your daddy’s elements, and as we discussed in the video, the elemental powers on display are smoke, neon, ‘video’, and concrete. And none of that really means anything at a glance, does it? That’s just how kooky and alternative we are. ‘Smoke’ is basically just fire’s cool and alternative cousin who hangs out behind the bike sheds with the bad kids, and ‘concrete’ is just stone that raises a whole bunch of questions (like, do you also have power over water, cement, aggregate and other reinforcing elements that make up concrete, or is it only when they’re all brought together that it starts working, and if so where’s the dividing line and how many ingredients can be added or removed before your powers don’t apply etc).

And as for the other two. Neon is a base chemical element, yes, but the power on display clearly shows bright glowing laser-lines like what neon signs look like. But neon only glows like that when an electric current is passing through it, so are you just farting neon gas out of your hands and then using a secondary electric power to light it up? Why don’t you just use the electric power? Or would that not express your free spirit enough? Don’t even get me started on ‘video’. At least with smoke and concrete you can get some sense that something physical is being projected that can wreck up someone’s face or augment your movement ability. ‘Video’ just seems to let you shoot and hover on JPG artifacts. 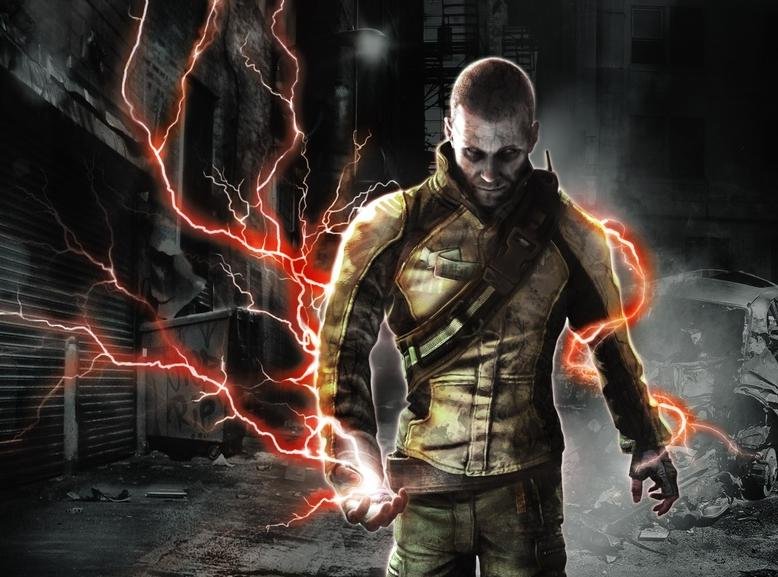 But these are all the wrong questions to be asking. In practice, the source of each elemental power doesn’t seem to influence much beyond what the powers look like. The fact is, every new power is just Cole MacGrath’s lightning again, but with different colors and particle effects. You could just as easily have run into someone with the elemental power of ‘poo’ (which someone in this world is bound to have if ‘smoke’ is a perfectly sensible choice, since they’re both waste products that smell). It wouldn’t have made any difference except that your hands would glow brown as you fired your projectiles, and your hovering power would be accompanied by a hilarious farting sound.

Yes, when you get a new power in inFamous: Second Son, you’re not getting new abilities at all – you’re just getting a new flavor of abilities you already have. It’s like variations in bathroom suites – different colors and shapes and layouts, maybe, but you can’t get away from a sink, a toilet and a bath. By which I mean, projectiles, movement power, and a devastating explosive. The variations between the powers were so minuscule that I saw no reason to tactically switch between them. Once a power was introduced, I’d just use it continuously until a plot event forced me to absorb something else, or I accidentally absorbed from a source different to the one I was after. At which point I’d just go, ‘fuck it, this’ll do,’ and use that instead. 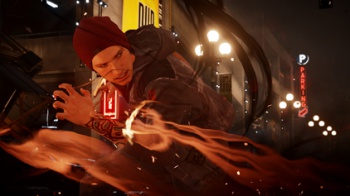 If you ask me, this all misses several opportunities to explore gameplay concepts and let the gameplay drive the story. Imagine for a moment that maybe having a conduit power doesn’t automatically come free with being tougher to kill than a cockroach when you’re only wearing slippers, nor with standard projectile attacks or the one ability to blow shit half to hell. How about, each power just does one thing, appropriate to the substance it draws from. And instead of each substance providing a slight variation on the usual suite of abilities, Delsin Rowe has to piece together a single suite of abilities from all the different substance powers.

So maybe your concrete is what makes you tough and hard to kill, and you can also create pillars and stepping stones out of it to help get around speedily. Smoke (well, it’s basically just fire, let’s face it) is your standard offensive attack that also fuels your hover thrusters. Maybe ‘video’ can influence electrical signals and exert power over the media, allowing for broadcasts, hacking of personal electronics, and everything else Watch_Dogs is supposed to be about. And then there’s neon, which glows very prettily. And maybe at a pinch kill someone with inert gas asphyxiation, as long as they’ve been sitting still for a while.

For one thing, this all might make it easier to depict the plight of conduits as something we should sympathize with. Oh no, the government is imprisoning and taking away the personal rights of this specific group of people. Oh no, what bastards, why’s that? Because every single one of them basically has the ability to nuke the city if they feel like it. Or if they just get really cross or have a particularly good wank. Oh, you know what, fair enough. It’d be much easier to hate the evil government lady if she was bringing the pain down upon gormless sadsacks who can just about fart noble gases. Maybe you wouldn’t even have to show her making people’s bones explode.

But there’s another way this approach might inform storytelling. The critical path of each inFamous game tends to involve the main character assembling a team of random johnnies to work together against the common threat, and with the scenario described, suddenly Delsin becomes a one-man symbol for that whole process. Sure, maybe farting neon or screwing with the TV signals aren’t going to let you take the world by storm in themselves, but when those powers are combined, there are no limits to what we can achieve. Well. No limits to what the one guy with the absorption powers can achieve, anyway. But hit me up, Sucker Punch, I think there’s a Saturday morning cartoon in this.

Diablo III vs Path of Excel