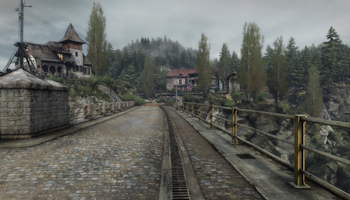 There’s a somewhat derogatory name for narrative-driven exploration games, the type of game that relaxes traditional “gameplay mechanics” in favor of relaying a story to the audience with varying degrees of interactivity. Those who care not for Dear Esther, Gone Home, or their ilk refer to such releases as “Walking Simulators,” a term that could be applied to The Astronauts’ The Vanishing of Ethan Carter.

I personally have no problem with so-called Walking Sims, provided they include the player in the world and give them some degree of agency, even if it’s minimal. The Stanley Parable was a fine example, factoring the player’s decisions to obey or disobey the narrator when unfolding the narrative. A Machine for Pigs gave simple puzzles and the need to discover points of interest in order to keep the audience invested, a tactic employed to even greater effect by Ethan Carter.

The Vanishing‘s puzzles are not exactly difficult to complete, at least once you’ve worked out their main consistent trick. The game proudly warns you that it doesn’t “hold your hand,” but what that really means is that it obscures its rudimentary puzzle elements with a lack of information, leaving the player to stumble upon the game’s primary method of interaction by accident. In fact, it’s quite easy to get through a vast portion of the game without figuring out exactly what needs to be done, and the game will roll with it, letting you solve as much or as little as you like. Once you do work things out, progress becomes more a case of following implied directions rather than doing any actual mental work.

Essentially, the aim of the game is to discover interesting items in a variety of locations, occasionally picking some up and putting them elsewhere, often simply finding and making a note of them, to piece together some grisly incident that occurred there. The first major example is a set of dismembered legs on a railroad. By wandering around the area, you can find the rest of the body, as well as a rock that you must place further down the track, a railcar you can drive (after finding the crank) and some severed rope. Finding certain items can be made easier by lining up words that shimmer across the screen whenever the antagonist – one hilariously named Paul Prospero – discovers some other, related entity.

Once everything has been discovered, and certain items are placed in the correct locale, the player “touches” the corpse to open a series of flashbacks to what happened. These flashbacks arrive as a number of still images, and the player sorts them in chronological order by assigning numbers to them. If the correct order is sussed out (it’s usually very obvious, or otherwise can be deduced by sheer elimination), then the flashback plays in its entirety.

That’s how most of the gameplay goes. There are a couple of more unique puzzles, though nothing truly innovative enough to warrant detailed attention. As players travel through the open – but relatively restricted and linear – world, they get to piece together an interconnected story concerning the mysterious disappearance of the titular Ethan Carter, as well as the fate of his family members. It’s a plot that combines murder mystery with Lovecraftian horror, and for the most part it’s intriguing stuff. The only problem is that The Vanishing of Ethan Carter‘s backstory would have made a better game than The Vanishing of Ethan Carter.

This is not to say Ethan Carter is a bad game – I found it quite a relaxing and enjoyable experience – but the story of a young boy whose family becomes possessed by an ancient and unknowable entity is something I’d much rather be playing. With every flashback I had to watch, I found myself wishing that was the game I was playing, because it looks like a really enthralling one. Instead, we’re kind of mopping up the resulting mess of a superior tale, never getting to directly experience it ourselves.

Nevertheless, The Vanishing is a pleasant little ride, despite the macabre subject matter. Strolling through an incredibly beautiful – if bleak – series of environments, putting the puzzle pieces together at one’s own pace, is something I found most satisfying, and there are a number of truly surprising little moments tossed in to keep things from growing too dreary. From chasing random astronauts to avoiding subterranean zombies, there are some weird little moments in Ethan Carter, and they work surprisingly well in spite of how disjointed they ought to be.

Presentation is a big part of the game’s appeal, with a series of gorgeous backdrops and a beautiful musical score. In a game where most of the “action” is walking and listening, it’s important to have audiovisual stimuli worthy of the task, and The Astronauts have not disappointed there. The main theme is especially pleasing, and that first walk across the stone bridge to the Carter household is a visually evocative thing – handsome, but faintly depressing.

The Vanishing of Ethan Carter strikes a firm balance between telling players a story and giving them the right amount to do in order to feel invested. While the puzzles aren’t very complex, they provide just enough engagement to make me feel like more than a glorified cameraman, which is by far the biggest pitfall for a narrative-driven experience (outside of a crappy narrative, obviously). The twist at the end is fairly limp, but until that point, an engaging mystery is dribbled into the player’s head, one bubbling with Cthulhu-inspired creepiness. It’s just a shame that the game’s strongest points also make me wish I was playing a different game entirely.

Bottom Line: The Vanishing of Ethan Carter is a good little story with a bleak atmosphere that nonetheless provides some relaxing puzzle solving.

Recommendation: If you already like these sorts of walkie-talkie games, Ethan Carter is a strong example of one.