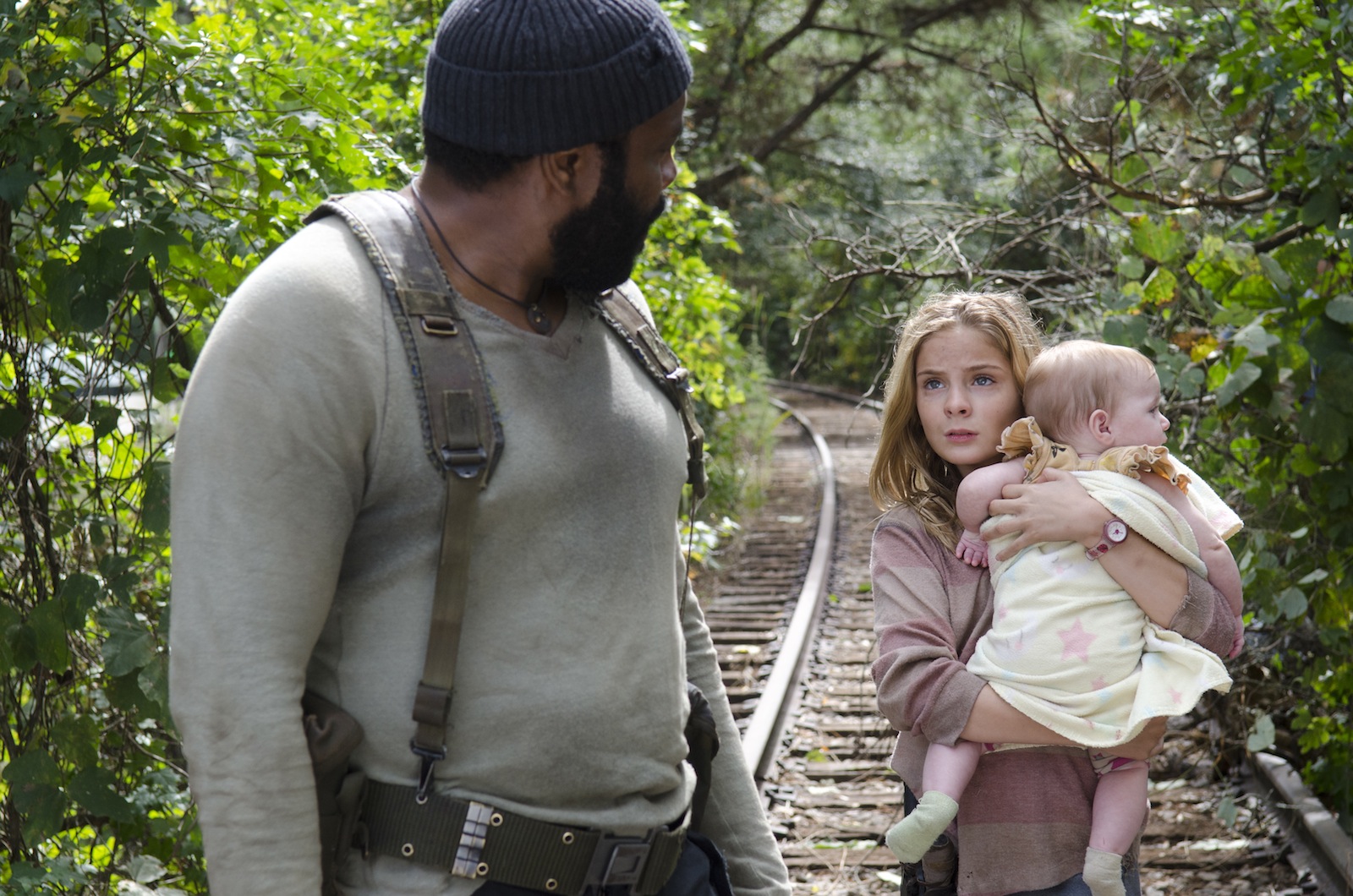 The opening of this episode told you just about everything you needed to know about where this story was going. With a teapot whistling away on an oven range, Lizzie happily plays keep away outside in the tall green grass…with a walker. Because that’s normal. Unfortunately, it’s also inevitable given her inability to see the walkers as a threat. And in this episode we see what happens to those that can’t function in this new world order.

In The Grove Carol, Tyreese, Lizzie, Mika and Baby Judith happen across an abandoned pecan farm. They clear it out of walkers and settle down. Soon they fall into a rhythm of simple domesticity. Carol and Tyreese hunt by day, Carol and Lizzie shell pecans by night while Mika plays with dolls and Tyreese falls asleep in a large chair in front of the fire like a happy, but tired patriarch.

It gets so comfortable that the two adults decide not to follow the tracks to Terminus, the destination of all the survivors scattered since the prison attack. The life they are building at the pecan farm is good enough. But as soon as that is decided, it all goes bad. Lizzie’s disassociation with the walkers, thinking they are alive and friendly, continues and when Carol catches her playing keep away with one, she gets a harsh lecture about their true nature. But instead of understanding, she seeks to prove her vision of them as friendly is correct by killing her sister. When Mika rises from the dead, surely everyone will see that Lizzie is right.

When Carol and Tyreese discover Lizzie standing over Mika’s bloody corpse, with baby Judith crawling on a blanket nearby, Carol is forced to talk Lizzie into handing over her gun while Tyreese stands by stunned. To make things worse, Carol not only has to talk Lizzie off the ledge, but must convince her to go with Tyreese into the house so she can stab Mika’s corpse through the head to prevent it from rising though this is thankfully done off screen. Later, Tyreese tells Carol that Lizzie confessed to feeding the walkers at the prison with rats (mystery solved!) and that she killed the rabbit there as well. Carol tells him “She can’t be around people” which is code for she has to be put down. Tyreese doesn’t argue.

Carol takes Lizzie out to the grove outside the house to kill her. Lizzie thinks Carol is mad about the walkers Lizzie has been playing with and starts to cry. Carol promises she isn’t mad, tells her to “Look at the flowers” and pulls the trigger. Carol breaks down as Tyreese looks on from the house. But that isn’t the real story here.

We know Carol will do what has to be done. Just like when she killed Karen and David at the prison to stop their illness from infecting everyone. We know Lizzie wasn’t going to change and eventually someone was going to have to address her psychotic behavior. What went down was not a surprise. Where all this is leading is much more satisfying.

Ever since Carol joined Tyreese in Inmates, we knew there was a bigger reckoning coming. One way or another, Tyreese was going to discover that Carol killed his girlfriend Karen back at the prison. And that growing tension throughout this episode was particularly well done. 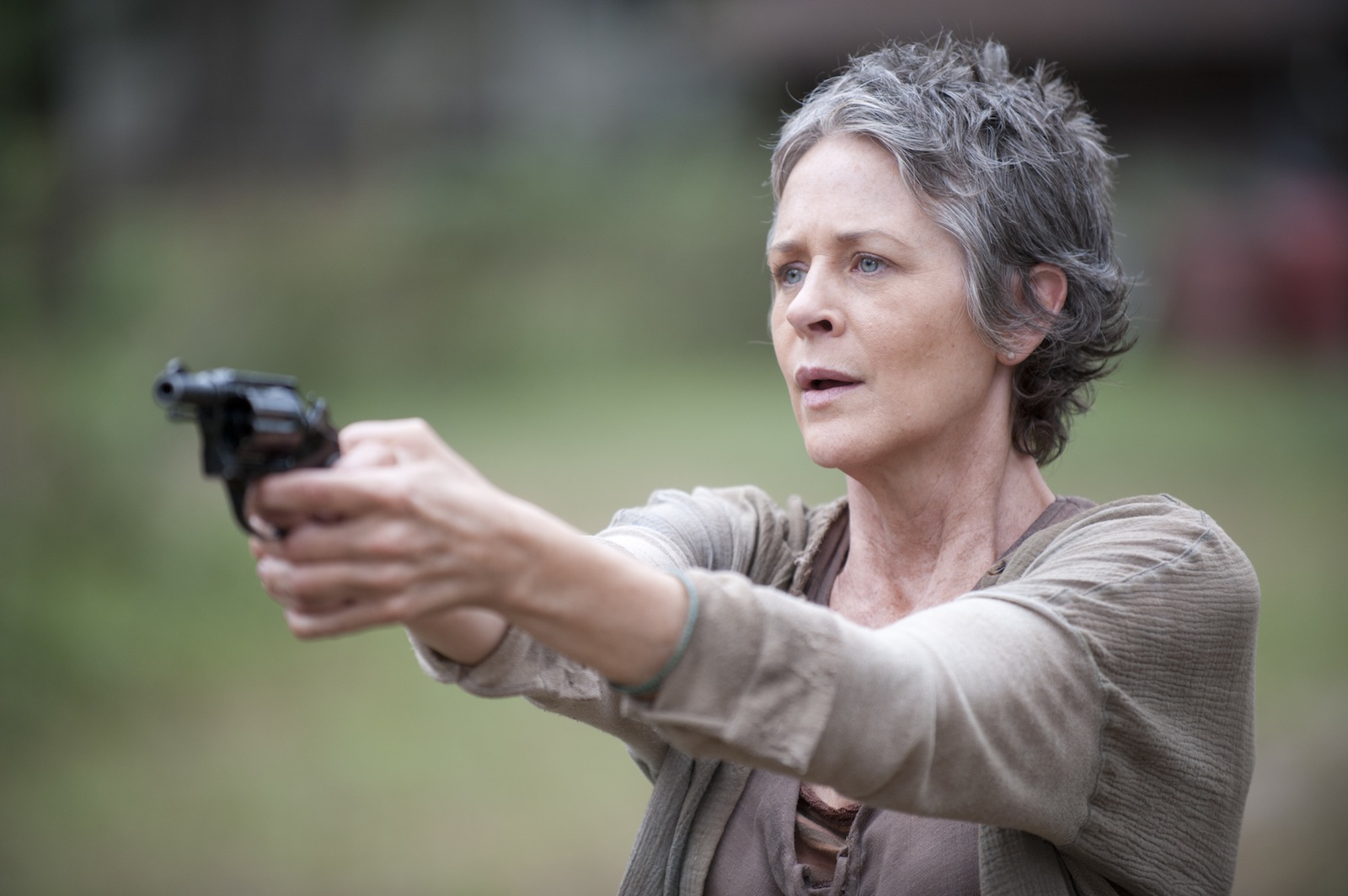 Watching Tyreese bond with Carol, telling her of his disturbing dreams, proclaiming his trust and love for her, agreeing to settle down at the pecan ranch with her to raise the girls, it all added more and more unease for both the viewer and for Carol. At one point, in the woods, she almost confessed the truth to him. If she had, he would have probably killed her right then and there.

Towards the end of the episode when she finally told him the truth, he forgave her. But for a minute there I wasn’t sure which way it was going to go. Was everyone at the pecan farm going to end up dead? Fortunately, not. And in the end, Tyreese and Carol realize that the dream of quiet domesticity isn’t a possibility and they abandon the land to head again towards the Terminus with Baby Judith.

There were a lot of subtle things going on in this episode. Carol was dealing not only with her guilt over killing Tyreese’s girlfriend, but also the guilt over the death of her own daughter earlier in the series. She so desperately wanted to do right by Mika and Lizzie as well as for Tyreese, but in the end she had to do what she always had to do: make the hard decisions though it hurt others around her. The actress, Melissa McBride, did an amazing job conveying the shame and the pain that Carol faced in this episode.

Tyreese was largely a bystander in this episode, but knowing that he was haunted by the death of Karen whose corpse was burned, it was likely a waking nightmare for him to see all the charred and burned zombies coming out of the foliage at them this episode.

Mika and her sister showed that neither of them were built to be survivors in this post-apocalyptic world. Mika refused to kill anything unless she absolutely had to and Lizzie wasn’t wired to understand the dangers of the walkers. In the end, there was no place for either of them despite Carol and Tyreese’s attempt to protect them and give them a “normal” life.

Finally, the show demonstrated the lesson it’s been telling for awhile now: there is no comfortable, domestic life to slip back into. It didn’t work for Rick and Carl after the marauders took over their house. It didn’t work for Beth and Daryl after Beth got taken. And it certainly didn’t work for this patchwork family that thought they could sidestep the ongoing horror from the outside world only to discover it came from within as well.

I’ve really been enjoying the new character dynamics that we’ve seen with the survivors forced to interact with different people. As they all converge towards the Terminus over the last two episodes of the season, I hope the writers keep in mind the fresh stories these new combinations have brought to the show. Too many fans had though the show should “Look at the flowers” and be put out of it’s misery, but these last six episodes have shown that it still has a great deal of dramatic life left in it.