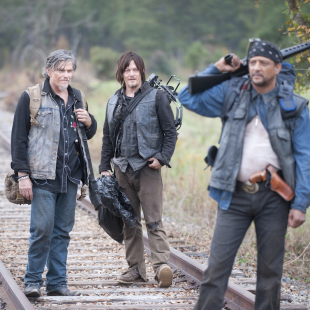 The survivors are reuniting, but are they (and we) being set up for a fall?

In every episode since the mid-season break, we’ve seen the survivors bloom in different ways and this episode is no exception. Tara gets absolution (of a sorts), Glenn becomes a leader and Daryl runs with kindred spirits. And by the end, the long hoped for protection of Terminus is finally found. All is well except for the missing Beth. Or is it? Let’s take a look at this episode and then prepare for what’s next.

It seemed that a few episodes ago, Daryl realized he may actually have a chance with a girl that he never thought would go for him. She saw his dark side in the moonshine cabin and she still stuck around. Hell, she even knew how to hold her liquor and got a kick out of arson. Daryl got a glimpse of a life he never thought he’d have pre-apocalypse. Then that all got snatched away when she was taken.

Now, it seems, Daryl is being offered a different, but no less appealing, post-apocalypse life. One where who he is and the survival skills he has to offer is acknowledged as valuable not by a beautiful and smart young woman, but by a father figure and a new set of brothers. And this is just as attractive to him as the life he hoped he could have with Beth.

I can only guess there is leading to a moment where he will have to choose between being with Beth or staying with his new pack of survival specialists. The approval of the pack leader means a great deal to Daryl who, as we learned, only heard demeaning and destructive talk from his father. But Daryl is a survivalist above all and once he realizes the leader Joe planted the rabbit head in his belongings to start the fight with Len and allow him to step in to side with Daryl, well, I’m betting the crossbow is going to do the talking at that point. 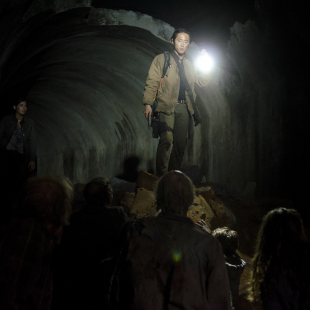 Glenn grows up and Tara gets a pass

Since Glenn woke up after the battle of the prison, battered and alone, he has had one mission: find Maggie. And he has done everything to make that happen including recruiting Tara who was, until that point, the enemy. He also denied the obvious protection offered by Sgt. Abraham and even wouldn’t take an extra day to detour around the detour because he thought Maggie was close. But for the first time in his recent storyline, he thinks of someone other than himself when Tara gets trapped and is faced with a horde of advancing walkers. Tara has become part of his family, too, and he is not going to leave her behind to be eaten by walkers.

Though it doesn’t look like he can save them both, he stands his ground and starts taking out the advancing walkers with a ferocity that he usually saves for dispatching obstacles on his way to find his wife. And when it looks like he, too, will be overwhelmed by the walkers, reinforcements shows up at the last minute in the form of his wife and the people he left behind to get to her faster.

He also shows another moment of maturity when he has to introduce Maggie to Tara. Given that Tara had backed the man who beheaded Maggie’s father, things could have gone very badly for her. But Glenn saw that she was a changed woman and introduced her as a survivor he had met on his way to find Maggie. The look of relief and the sense of almost-forgiveness that passed over Tara’s face with that hug told you everything you needed to know.

Let’s hope that Glenn’s new found leadership skills don’t desert him anytime soon. Though the reunited group has finally made it to the safe haven of the Terminus, I think we can all agree that unlocked gates, clean environment and free burgers for all visitors only masks an unspeakable horror that awaits us next week. Which leads me to… 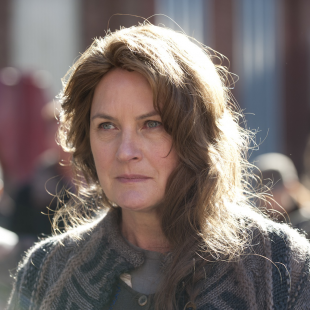 There has been an undeniable streak of hope and bonding in the recent stories. Michonne, Carl and Rick form a strong family unit that they all desperately needed. Glenn and Maggie are reunited due to their unwavering devotion to each other. Daryl discovers through Beth that he might be a better man than he was brought up to believe. And all roads lead to the oasis of peacefulness that is Terminus where newcomers are met by a smiling Tasha Yar, um, Denise Crosby.

This all can only mean one thing. We are being set up to get our hearts ripped out Joss Whedon-style in the final episode of season 4.

The writers have spent the last handful of episodes telling small, intimate stories about each character, drawing us into their lives and their hopes and their pain. Who doesn’t love the already lovable Daryl now that he has fallen for the out-of-his-league Beth? Who doesn’t feel the pain of Carol’s decision to put down the dangerous Lizzie whom she hoped would replace her own tragically-killed daughter? What unfeeling wretch didn’t get misty eyed when Maggie told Glenn he doesn’t need a picture of her anymore because she will never leave again?

Now that you have the warm fuzzies seeing Michonne laugh playfully with Carl, hearing Eugene declare he has to live with his decisions in a rare flash of self-awareness and seeing Bob slowly draw Sasha out of her shell, the show is going to use that to break your heart horribly on Sunday night.

Mark my words. Joss Whedon showed the way and I’d bet the rent that the Walking Dead creative team is skipping merrily down that path. Bring the tissues and be prepared to rage on the Twitters Sunday night. It’s going to be a bloodbath.