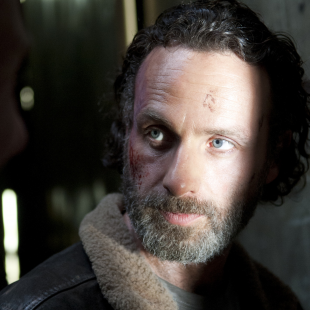 The season 4 finale brings us a new Rick, a survivor reunion and a creepy new settlement to kick of season 5.

We got some surprise flashbacks to the beginning of the season as Hershel (poor, beheaded Hershel) sells Rick on the idea that their life is about more than killing and basic survival. That Rick has to think about the lessons he is teaching Carl through is actions. Maybe learning to rebuild a civilized existence by farming and not killing is what is more important. Thus, we got boring, Pacifist Farmer Rick for the first half of the season.

But once the protection of the prison fence is gone in the second half of the season, Rick does a 180 and not only turns into Feral Warrior Rick, he has absolutely no remorse about it. A few hours after he viciously bites out the throat of gang leader Joe to save his son Carl from being raped, he calmly tells Daryl that he is like a brother to him, forgiving him for whatever he has done. There is no trauma or angst over his brutal actions. He is comfortable enough to express deep affection for Daryl a short time later.

This is further confirmed by his statement that closed the season. When Rick is stripped of his weapons, locked in the boxcar and surrounded by snipers his only response is: “They’re screwing with the wrong people.” Not only is ready to rip out the throat of every person at Terminus, his statement of vengeance is worded to include his extended family in the boxcar in the vendetta, not just himself and his son.

This was all touched on by not only the Hershel flashbacks where the old man asked Rick what lessons he wanted to teach his son, but in Rick and Carl’s discussion at the beginning of the episode as they tromped through the woods:

We now know who Rick is, but as for the rest of the crew trapped in the boxcar, we’ll have to wait until next season to see how far they are willing to go to survive and protect each other. 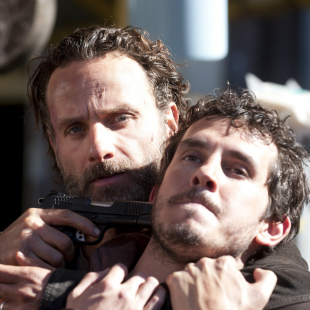 The mystery of Terminus revealed…sorta

In case you missed it, the writers laid out a lot of clues to the true nature of cannibalistic crew that inhabit the Terminus. And I don’t just mean the human skeletons stripped of muscle and the creepy candle room dedicated to it’s victims.

For example, early in the episode Rick, Carl and Michonne talk a lot about how hungry they are and Michonne remarks that she wishes for a time when she wasn’t so hungry. The Terminus folks likely felt the same way and found a solution, eh?

Also, Rick shows Carl how to set a rabbit trap. Create a trail the rabbit has to follow and then set a snare at the end of it. Which is exactly what the Terminus folks have down with their maps and later when using gunfire to herd Rick’s group to the boxcar they want to trap them in until they are ready for the slaughter.

Do we know for sure the Terminus group are cannibals? No one has stated it outright, but between the Tasha Yar welcome wagon BBQ, the stripped human skeletons and the memorial room, all signs point to yes. Robert Kirkman hinted in an interview earlier this week that the real mystery is how they got that way and promised it will be revealed early on in the new season. 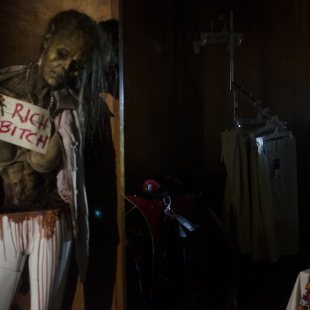 The writers made sure to leave some mysteries unsolved for us as the season closes.

What of Tyreese, Carol and baby Judith? Rick saw powdered milk labels on the ground in front of the box car before he stepped in. Did the trio already get processed? Last we saw them they were heading to Terminus.

What of that defiled painting Michonne found in the house with Carl when they were scrounging for food? Does it have anything to do with that bizarre wealthy lady zombie that was cut in half at the waist and placed on a mannequin legs in the country club gift shop spotted by Daryl and Beth?

And, who snatched Beth and what awful things are happening to her?

Speaking on the after show, The Talking Dead, showrunner Scott Gimple said that his goal in season 4 was to give each character their own story every eight episodes (the Fall half and then the Spring half) and he plans to do it again this Fall when the series returns for the first half of season 5. I really enjoyed the way the characters showed growth and backstory and new interactions with each other and I look forward to more of that later this year. And, of course, more remorseless, badass Rick showing those smug Terminus hipsters what it really takes to survive in post-Apocalyptic America.