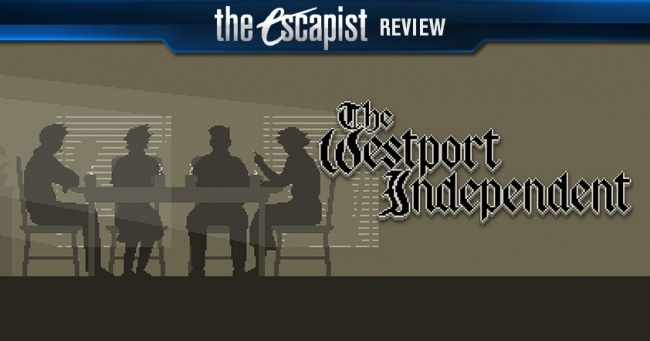 Let’s say you control the media. A news story has landed on your desk: The President celebrated his birthday and received parades in his honor, but a rebel movement that fears his power responded with protests. Do you focus on the parades and festivities? Do you put a spotlight on the protesters and their concerns? Does it make a difference if your decisions might get the newspaper shut down?

The Westport Independent is a game where you decide what truth citizens get to hear, and watch the effects unfold on a personal and national level. While I was personally skeptical of the game’s censorship-inspired premise, the quality of its execution is clear. The game avoids most biases by focusing on the impact of political decisions, letting players decide which choice is the correct one. The end result is a story that will leave you thinking, and impact the way you analyze news media. 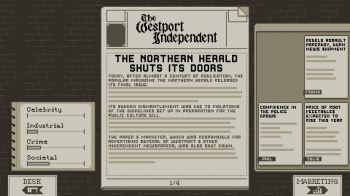 When the game begins, you are the editor responsible for assigning content to a weekly newspaper before a Public Culture Bill takes effect. The Loyalist Party of Westport passed a law forcing independent media outlets to join a government union and be under their direct control. They demand you print content that strengthens the people’s loyalty to the government, that inspires morality, and heartens propriety in their society. You’re forbidden from printing “deceitful” content that harms the appearance of the country, loyalist government, or the President. Glorifying the actions of rebels will not be tolerated.

Each week, you are presented with potential stories to publish, and must decide what’s newsworthy and how to present it. You have the ability to assign newspaper employees to each article, change headlines, and redact parts of stories. However, if you’re suspected of being too sympathetic to a local rebel movement, the government will shut down your newspaper.

Westport contains four regions: The Northern Suburbs, Western Districts, Eastern Factories, and Southern Docks. Each neighborhood also has its own preferred news topic: Celebrity, Crime, Industrial, and Societal. Focusing on particular topics has a direct effect on how profitable your newspaper will be for the week. On top of that, a region’s sympathy towards loyalists or rebels will change based on the presented stories. Depending on your choices, some stories may lead to follow-up articles, further fueling the fires of rebellion or suppressing government dissent.

When assigning stories, you’ll also need to take the backgrounds and political beliefs of your writers into account. Phil is a loyalist inclined to deny writing stories that paint the government in a negative light. Frank is a rebel unable to tolerate writing propaganda pieces skewed in the establishment’s favor. Julie is a freelance writer that has some doubtful opinions about the government, but not as extreme as Frank. Anne is a parent that lives out by the Eastern Factories, and she just wants to write articles to get by. Each character’s background determines how comfortable they are with certain news stories, although their political outlooks can change as the story progresses. 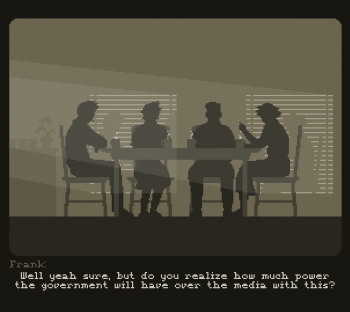 Reactions to your newspaper are reflected in letters and messages from the outside world. If an employee makes the government angry, expect a warning from them that they’ll take action. If the politics in a district shift, propaganda posters might be brought to your attention.. Eventually, staff might leave the newspaper – noted either by a letter of resignation, or word from the authorities about their “re-education”. These details give weight to your choices and make the world and gameplay feel authentic.

After finalizing an issue of your paper, your employees react to the news in the office breakroom. The Westport Independent is a bit weak here, since discussion topics are limited to certain stories. News like the President’s birthday, or reports of fish containing mercury are guaranteed conversation topics. There’s a default cutscene where the staff talk about the weather when there’s nothing’s considered newsworthy – which might occur the same day loyalists announce a plan to censor comic books and movies. Regardless, these sequences are successful in fleshing out the characters, and has a strong payoff when the game ends.

The ending credits show the effects of your news coverage on the population. A final article describes the outcomes of the political conflict in each district, based on the area’s support to loyalist or rebel factions. The Westport Independent takes the ending a step further by describing how your employees lives are changed by your actions. Do they fit into the resulting world you’ve created? How do they cope with this political war they’ve seen unfold? This is where the game pulls everything together and shines as a narrative experience.

The Westport Independent will leave you more aware of the media as a whole, and how editorial direction can have wide-ranging results. While the game is short, that playtime is justified since you can replay and explore different possible outcomes. The $9.99 initial price might be too high for some people’s liking, but the story is certainly enjoyable for the hour or two needed to complete it. Whether that makes the game worthwhile is a truth players must decide for themselves.

Bottom Line: The Westport Independent is a game of editing the news, shaping lives, and deciding what people think the truth is.

Recommendation: This is a great choice for fans of Papers, Please, and anyone who wants a game that makes you critically think about real-life topics.