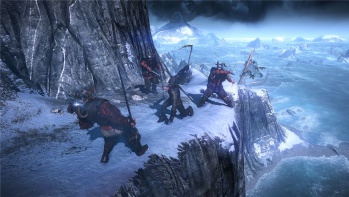 Geralt’s saga comes to a close.

Confession time: I’ve never played a Witcher game. The first one was originally released on PC, I’m a console gamer, so it just didn’t work out, and I let it pass me by even when the series made the move to consoles. From what I’ve seen of The Witcher 3: Wild Hunt, I probably shouldn’t make that mistake again. Even though the hour-long presentation at CD Projekt Red’s booth was marred by crashes and technical issues, I still walked away thinking that The Witcher 3 looked like my kind of game.

At the start of The Witcher 3, the world is in chaos. The Empire of Nilfgaard is ravaging the northern kingdoms, and a ghastly, dark force known as the Wild Hunt has emerged as a new threat. According to a producer, the plot of the game is centered on Geralt’s personal journey, and he’ll have a lot of room for that journey-the open world of The Witcher 3 is 35 times bigger than its predecessor, with around 50 hours of gameplay from the main quest and another 50 from side quests and optional objectives.

The hands-off demo was from the middle of the game, with Geralt on his way to talk to a survivor of a recent Wild Hunt attack. Along the way, he encounters some bandits and chooses to engage them and save their hostage. This choice is up to the player; Geralt can intervene or simply ride away on his horse.

During the bandit fight, the demo crashed (“Did I mention this was pre-alpha?” the producer joked nervously), so we were given some information while the game reloaded. The combat has been refined for The Witcher 3, combining classic RPG action with the precision and speed of a fighting game. This gives the player a lot of tactical options, letting you mix sword-fighting, magical signs, and alchemy to take down foes with your own personal flair. Finding enemy weak spots and adjusting your combat approach accordingly adds to the strategy, and Geralt’s journal provides him with information about some of the tougher foes he’ll face.

Upon reloading the demo, there were some gasps of “wow” from the audience as we got a glimpse of an area map and were told it was only one small part of the game. The environments I saw were very classic action-RPG: open fields with mountains in the background, forests, and occasional sleepy towns strewn about. But beyond that, Geralt can explore no man’s lands (territories ravaged by war), big cities, and other varied areas, at least according to the CD Projekt Red rep. And there’s no “immersion-breaking” loading as you move from area to area, so there’s no reason not to explore freely.

After another technical hiccup, Geralt’s optional encounter with a wild beast gave us a look at the “more analytical” combat, and we were told that Geralt doesn’t run like crazy in a fight anymore. It’s more dangerous, and also more intimate, with the camera giving a close view of the Witcher and his foes. One button press equals one hit, allowing you to hone your skills to take advantage of the precise combat. After a bit of a struggle, the beast ran away, leaving the Witcher (and the player) with the option to track it, hunt it down, and kill it; for the sake of the demo, Geralt moved on.

Finally, Geralt finds Bjorn, the survivor he’s been looking for. Bjorn’s village was destroyed by the Wild Hunt, and Geralt needs information in order to find and defeat the terrible adversary. After a short conversation, another side quest is triggered. Bjorn, who’s just not having the best luck, is told that his brother has been murdered; as it turns out, there’s a woodland spirit that’s been murdering people in the area for many years. Given the choice, Geralt steps up to help (for a fee, of course), and this time we get to see just how he uses his tracking skills and journal to gather information and hunt noteworthy foes. Sometimes quests like these will trigger scenes that show the long-term results of Geralt’s actions, and let’s just say he doesn’t always make life better for the villagers.

Though he had the same main objective for the entire demo, Geralt kept getting involved in other tasks, and that’s part of what makes The Witcher 3 so appealing to me. I love games that pull you off the path and give you more ways to get involved in the world, assuming the world created in the game is worth exploring. If it’s as big as CD Projekt Red says, the sheer size of The Witcher 3 is almost intimidating, and I’m definitely curious about what’s beyond the small stretch I saw today. CD Projekt Red has already said that this game will be the end of Geralt’s story, so let’s hope his final journey is the most memorable.