So let’s talk about comedy games. In my last ZP I talked about Headlander, and how it felt more like a game with too many comic relief characters than a “comedy game” per se. This is because the actual events that drive the plot are largely po-faced; it’s a fairly hard sci-fi yarn about saving all the digitized humans from the evil dictator. 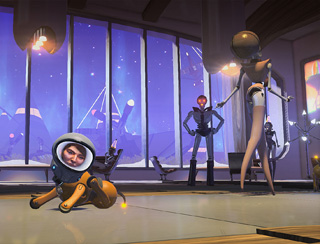 To my mind, what differentiates a full on “comedy” from something that’s merely light-hearted or having a comedic tone is that you can tell that it’s a comedy from just a synopsis of the events that happen in the plot. Even if they’re not inherently funny there’ll be some obvious absurdity or exaggeration about them. Ghostbusters is a comedy because they fight a giant marshmallow man. The exception would be if we’re talking about a deliberate deadpan parody, like Airplane! and everything else Leslie Nielsen did after 1980.

To bring things back to games, Psychonauts is a comedy game. You’re attempting to save the world from villainy afoot in a summer camp for psychics. That’s an absurd scenario, the supernatural being accepted in a conventionally mundane and innocent setting. Sunset Overdrive is a comedy game about people being turned into mutant zombies by an energy drink; again, something absurd and monstrous comes out of something as innocent and faintly lame as a commercial beverage. It’s a failed comedy game because it’s not in the least bit funny, but it did at least make its intentions clear.

In contrast, something like Sacred 3 I would not classify as a comedy game, it’s got a fairly straight fantasy RPG plot. It’s just that someone seems to have tortuously tried to crowbar snarky humour into every single line of dialogue, whether it was needed or not, and it’s absolutely excruciating. It makes me think of films that are the tragic victims of studio meddling like Suicide Squad, that end up trying to keep five different tones going because various people in charge couldn’t decide in what direction the prevailing winds were blowing.

My point is, it’s best to pin down exactly what your work is trying to do rather than shop indecisively around, and Headlander leaves me cold. It feels like Double Fine arrived at a similar area to Sacred 3 from a different direction – rather than the straight fantasy trying to be funny, they’re the funny company trying to do something a bit more serious but feeling obligated to keep it anchored in the funny zone.

Headlander‘s comedy tone is more in the dialogue and the visuals, but even then the humour feels more like the crispy outer shell than a thing that infuses it. The only characters who come across as inherently quirky are the background ones, like the apologising turrets and complaining doors, and the characters that are actual agents of the plot mostly come across as serious. As for the visuals, most of the humour in them comes from a sort of “let’s all point and laugh at how people in the 70s were different” area.

A hilariously pithy line of Swiftian prose will see you through a moment, but you can live off a knob gag for years.

I suppose there is something quite inherently funny about you being a disembodied head, and the way you can attach yourself to lame retro android bodies and Roombas, so maybe I’m understating it. Maybe I’m just down on the game because what humour it had didn’t make me laugh. There’s a very simple structure to gags that video games routinely cock up: set up, then pay off. The joke in you being a floating head pays off precisely once, at the very start, and then the humour value just hangs around the rest of the game like a weird smell.

A lot of humour in games seems to fall into the Spider-Man trap of repeating itself, as with Spider-Man constantly repeating the same comedy quips throughout combat until you want to break a chair leg off in his teeth. A particularly egregious example in Headlander is the apologising turret. It wasn’t even funny the first time it yelled SORRY as it belched laser. See, Portal did broadly speaking the same joke with turrets that forgive you for destroying them. First of all that’s initially funnier because the turret was trying to hose you down with white hot death, so if anything you’re the one who needs to be forgiving it. Secondly, the line only plays once, when you destroy the turret, so it doesn’t get stale quite as fast, and thirdly it mingles with the sense of relief one gets from removing a hazard from the game.

But the turrets in Portal were non-characters. That was part of the joke too, I think, its voice lines were prerecorded things put into an automated weapon by the manufacturer out of some incredibly misguided attempt to make them seem friendlier. The turrets in Headlander are I think supposed to be characters with personalities – or, one suspects, a single personality spread across the entire security system, which would be in keeping with the way digitized consciousness works in the rest of the game. In which case, if it were me, I would have given them an arc. Rather than persistently yelling SORRY from start to finish and run the non-joke into the ground, maybe at some point in the storyline the player could inadvertently do something the turret finds incredibly offensive, and its personality would shift through disbelief to righteous fury before (just before the end of the game) breaking down in tears and begging forgiveness because it let its emotions carry it away. All the while emitting the same constant stream of hostile gunfire. That’d work better as a joke ‘cos it’s adding a new twist to the established gag.

This is a suggestion I wouldn’t have thought Double Fine needed to hear, since they did this very thing in Psychonauts. There are two cheerleader characters who are established early on as very annoyingly upbeat. That’s the initial gag, but then later on you catch them attempting suicide and realise they’re both horribly manically depressed. That’s the admittedly kinda dark twist. Similar thing with Wheatley in Portal 2 when he very suddenly switches from moronic sidekick to moronic villain.

Even then, gags that are dependent on dialogue always have a shelf life. A hilariously pithy line of Swiftian prose will see you through a moment, but you can live off a knob gag for years. Nine years and counting, so far.