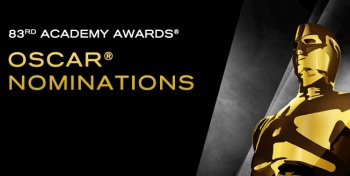 Yesterday, Oscar winner Mo’Nique joined Academy of Motion Picture Arts and Sciences President Tom Sherak to announce the nominees for this year’s Oscar awards. National Public Radio opines the resultant nominations comprise “a largely fuss-free Oscar field,” and with a couple notable exceptions, NPR is right on the money. The 2011 noms may not be surprising, but they’re certainly going to make for a number of tight races, particularly in the six big categories (Best Picture, Actor, Actress, Actor in a Supporting Role, Actress in a Supporting Role, Director).

The big category, Best Picture, shows a diversity absent in previous years and the nominees compromise a nice cross-section of genres. Much of this variety stems from the category’s expansion from five nominees to ten, but it’s still nice to see the change living up to its intended purpose. There’s the standard Oscar-bait, of course, with fancy-pants arty films, period dramas, inspirational true stories, and tightly scripted dramas (Black Swan, The King’s Speech and True Grit, The Fighter, The Social Network). A one-man show, a dizzying noir-ish fantasy, a dramatic comedy, a family-friendly animated film, and a taut drama that took home the Grand Jury price at the 2010 Sundance Film Festival round out the list (127 Hours, Inception, The Kids Are All Right, Toy Story 3, and Winter’s Bone), making this a year in which everyone is likely to have seen at least one film up for this coveted award.

Acting categories are a little less diverse, with most of the honorees stemming from serious roles in serious films, as is usually the case. It’s nice to see Michelle Williams snag a nomination for her “I actually lived with Ryan Gosling while we were making this movie and then they rated the damn thing NC-17 for a minute, so it looked like no one was going to be able to see it” star turn in Blue Valentine, a film that missed out on every other major awards category. James Franco made the cut (ba dum cha!) for his portrayal of Aron Ralston, beating out Robert Duvall (Get Low) and Ryan Gosling (Blue Valentine) for one of the two slots in the Best Actor category up for grabs. (Jeff Bridges, Jesse Eisenberg, and Colin Firth were largely considered locks for a nomination).

The other toss-up landed in the capable hands of Oscar winner Javier Bardem, for his work in the bleak foreign-language nominee Biutiful. Julia Roberts must be pleased — talking to Entertainment Weekly about Bardem’s Oscar odds, she said “If there’s not hope for talent, then we’re f-ed” — but the nomination may pale in comparison to the recent events of Bardem’s personal life. (His wife, fellow Oscar winner Penelope Cruz, gave birth to a son the day after nominations were announced.)

In the supporting roles, Jeremy Renner reps The Town, a film some considered to have a shot at the Best Picture nomination. Hailee Steinfeld, the true star of True Grit, wound up with a supporting actress nomination. While this is an obvious misnomer, it strengthens her chances at an award, and the Academy likely realized this. Voters are allowed to place actors in whichever category they see fit, which might be why we find The King’s Speech stars Colin Firth and Geoffrey Rush up for Best Actor and Best Actor in a supporting Role, respectively.

So who got straight snubbed? The most controversial pass-over has been Christopher Nolan, recognized for his direction of Inception with a Golden Globe nomination, but not afforded hopes for an Oscar. Nolan has been nominated before in a writing capacity, but never for his thoughtful direction. I’m also surprised that Inception missed out for editing, but they were recognized for sound editing, sound mixing, visual effects, and art direction, so I suppose I can deal. Mark Wahlberg, I’m sorry you didn’t get a Best Actor nomination. Say hi to your mother for me. Mila Kunis, Andrew Garfield, and Julianne Moore were passed over in the supporting categories, as was Justin Timberlake, who has just missed up his best chance to EGOT.

I haven’t had enough time to mull over these, but my predictions will roll out sooner or later. What do you think? Do these nominations truly represent the best of film from 2010?

The discussed categories in full, via Deadline:

Where Do You Fall on the Fandom Spectrum?