Australia may be a continent full of scary death animals, but it also has amazing cosplay.

We really are approaching Peak Convention. July is absolutely packed, with conventions in Los Angeles and Minnesota happening this weekend alone. But it’s not just Americans spending this time banding together in all things nerd, Australians are also doing it, and this weekend is Oz Comic-Con, a multi-city event held simultaneously in Melbourne, Brisbane, Syndey, Perth, and Adelaide.

For obvious reasons, we weren’t able to attend ourselves, but Stephen Heller was nice enough to attend the Melbourne installment in our place, and he’s brought back a ton of great cosplay photos that really make it clear how dedicated the Australian geek community is. Not only is there a lot of intricate recreations of famous costumes, but some rather clever takes on iconic characters as well. For instance (SPOILER ALERT), someone mashed up Boba Fett and The Rocketeer. He’s sent us so many photos that we’ll be bringing you more than one gallery. Stay tuned for the second installment.

Meanwhile, first up, I think we can all agree this is by far the greatest and most adorable Dalek costume ever made. But you know what? This isn’t the only outside the box Doctor Who costume in the gallery. Australians are kind of good at this. (read on for more, trust me.)

All photos taken by Stephen Heller for The Escapist. 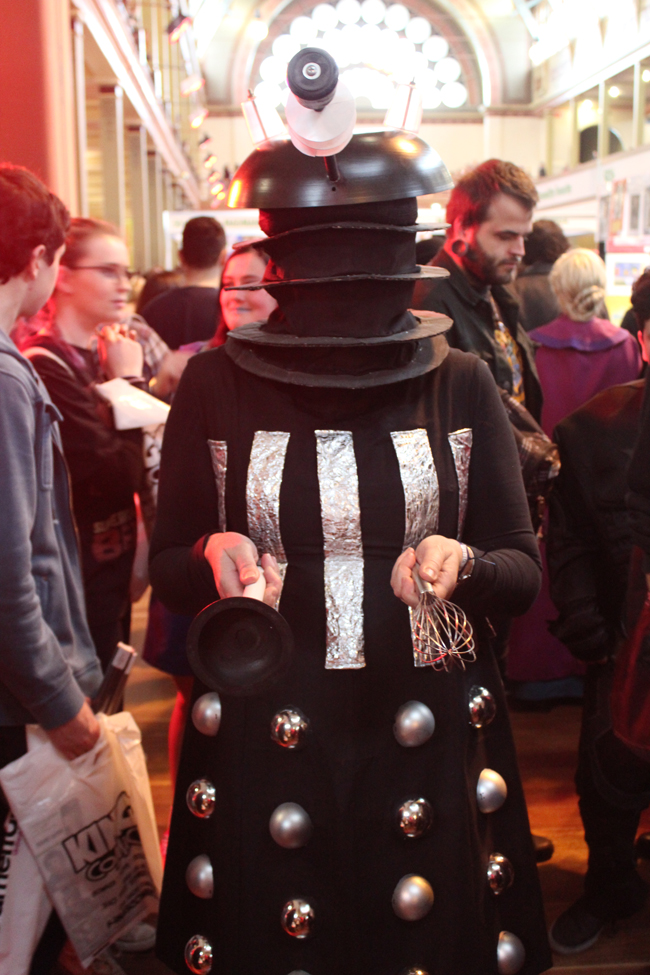 I predict that some time in 2015, all cosplayers will be contractually obligated to go, at least once, as someone from Attack on Titan. Luckily, Attack on Titan is completely awesome. 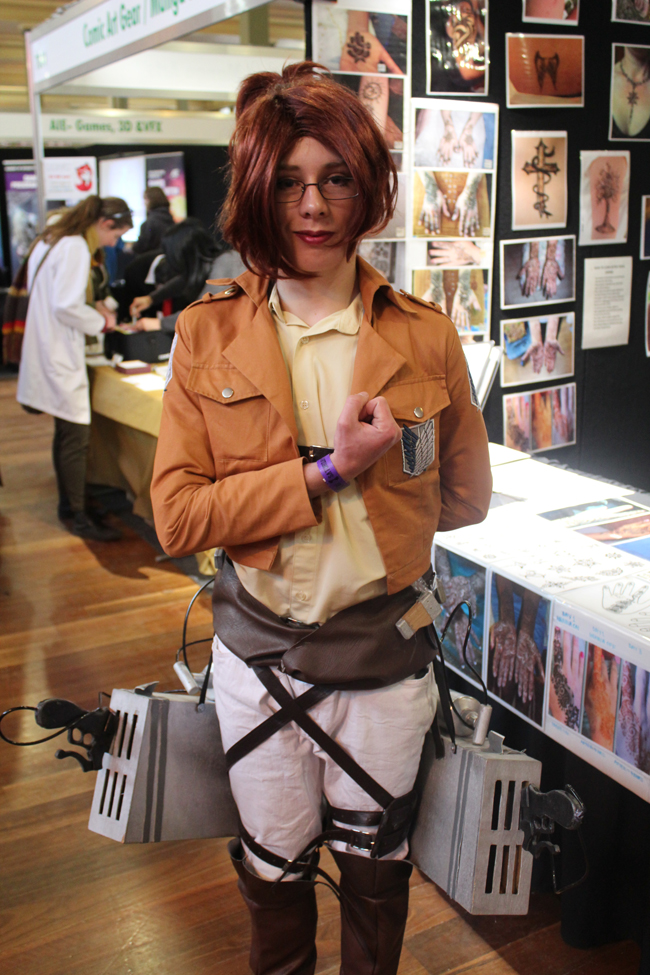 I’ll be honest, I don’t know who this is. Readers, I put it to you to school me on who this television guy is. Feel free to make fun of me. 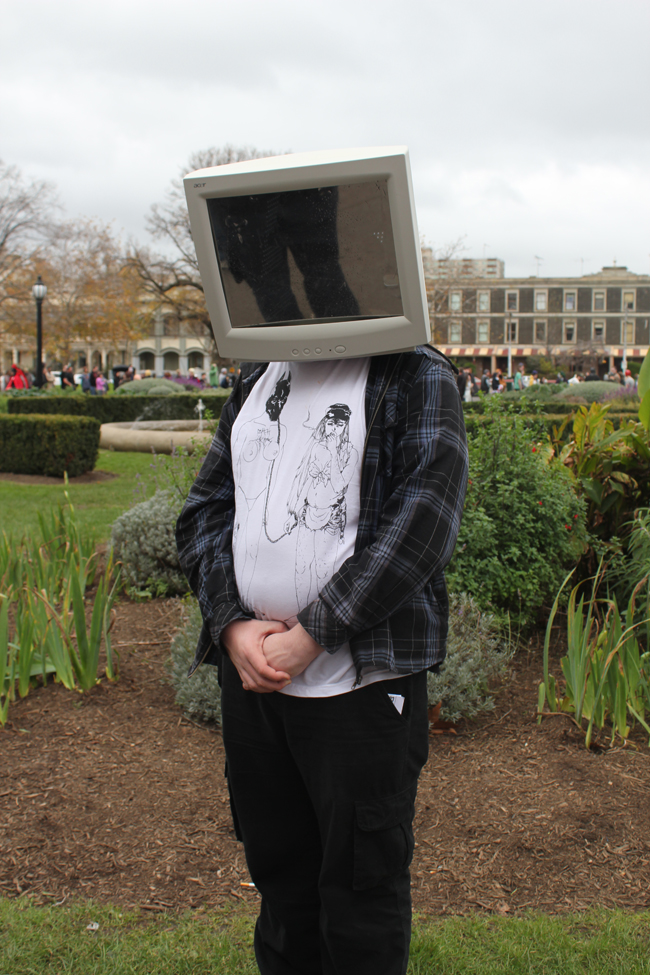 Australian members of the Assassin’s Guild will kill you a day ahead of when they’d kill you here in the states. 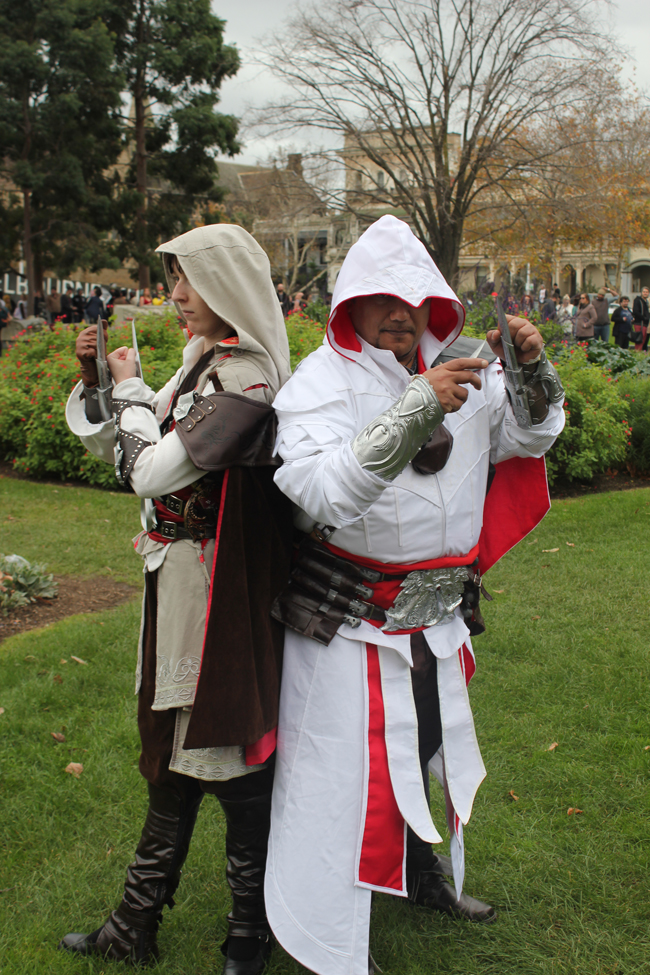 I give you the greatest Ellen Ripley costume ever, hands-down. 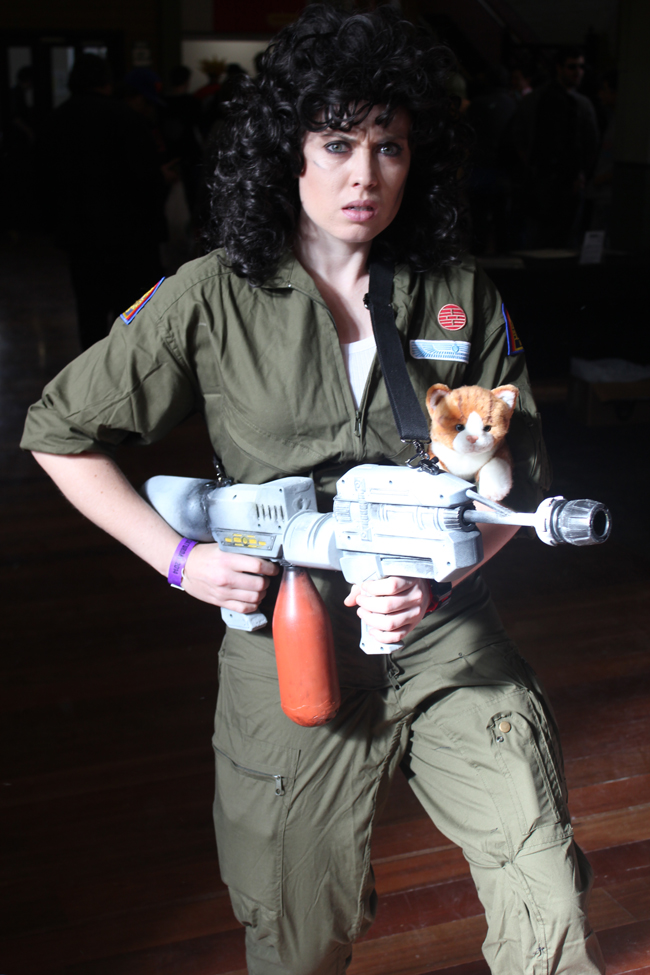 Was I lying? Nope. Greatest. Ellen Ripley. Costume. Ever. And the cuddliest. 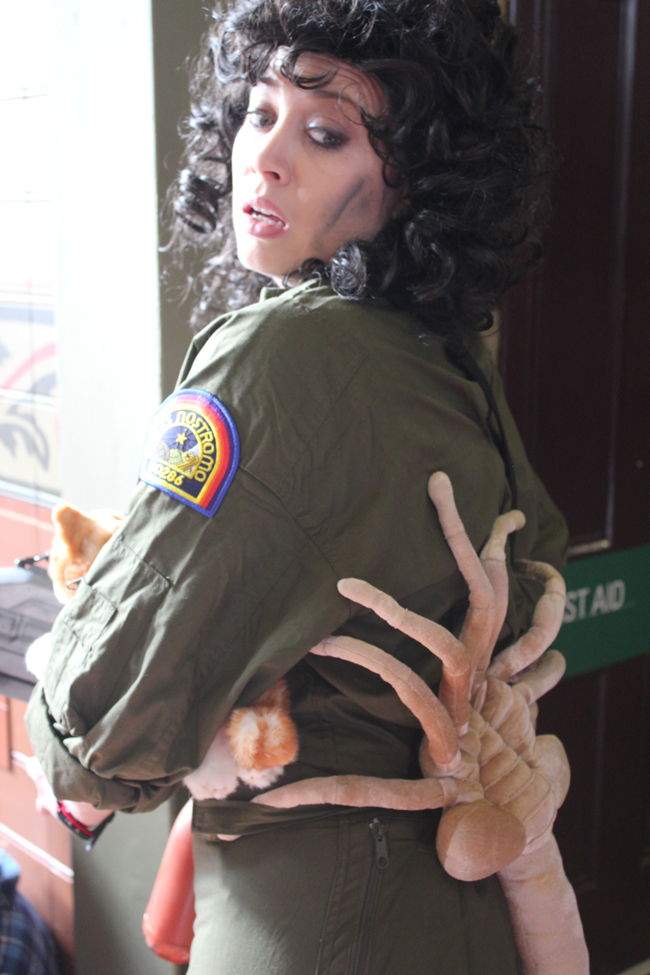 Not only is this some rather fun Bob’s Burgers cosplay, it’s also based on the single greatest episode of Bob’s Burgers. 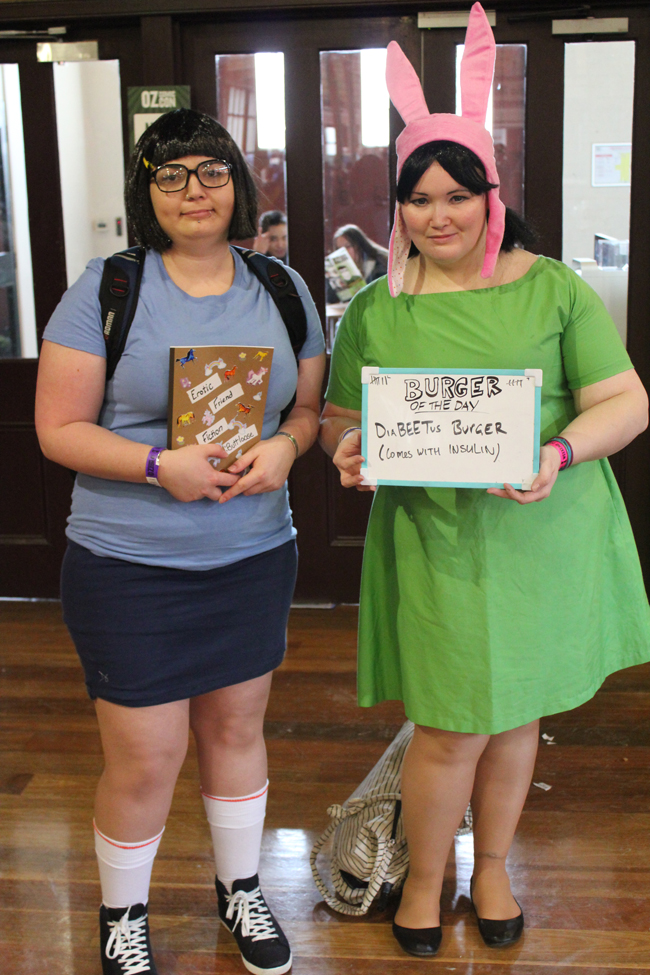 I don’t know what this costume is, but I do know that it’s insanely awesome. Commenters, care to educate me? 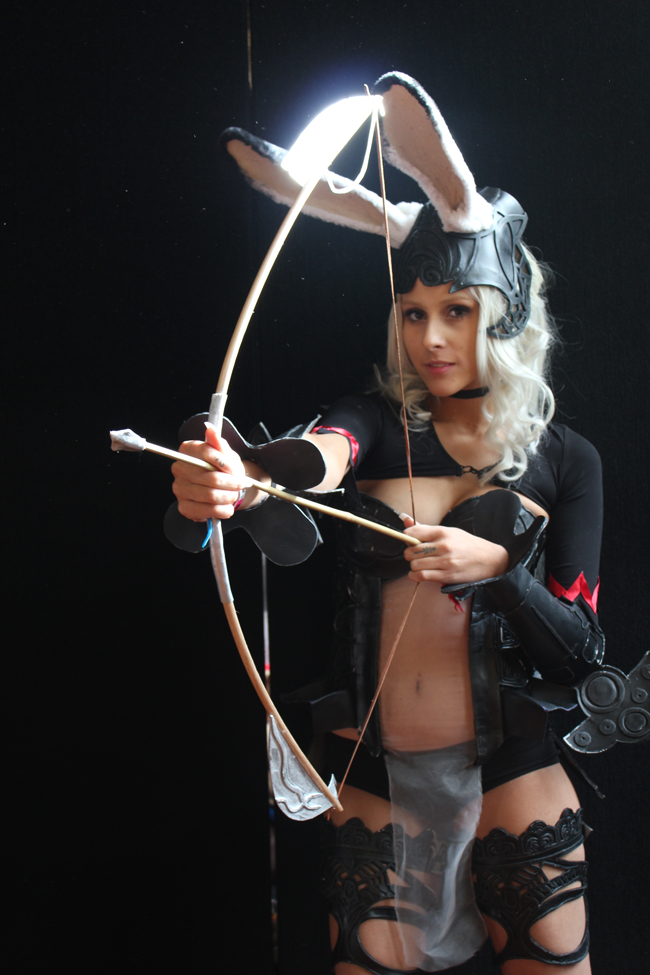 Yep, this is a really, really smart Doctor Who police box costume. 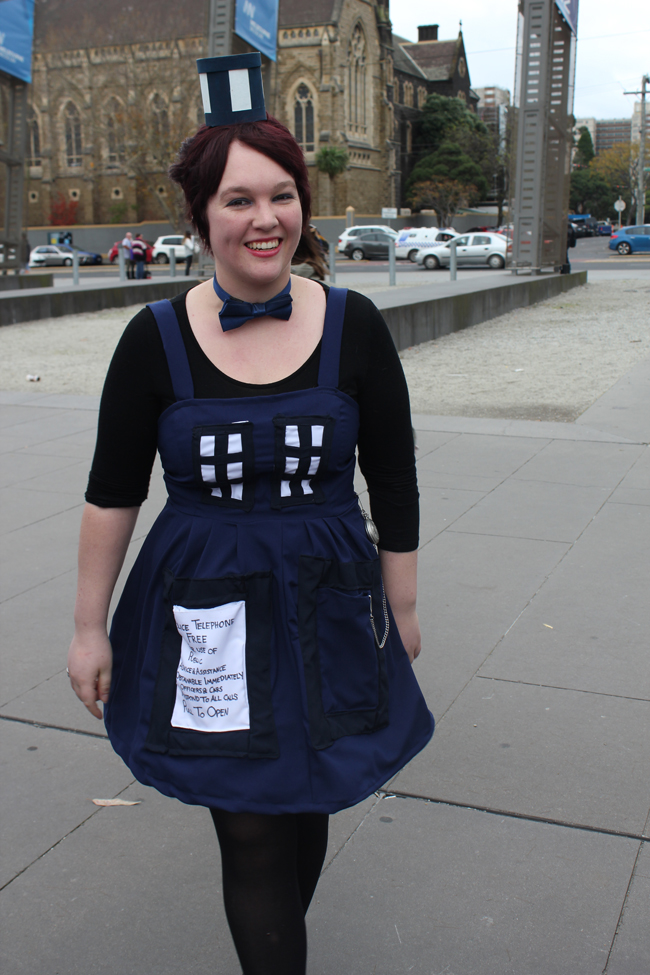 Now I think I know what this is, but I’m also probably wrong. Which Joker-inspired character is it? Or, is this a Rule 63 Joker? 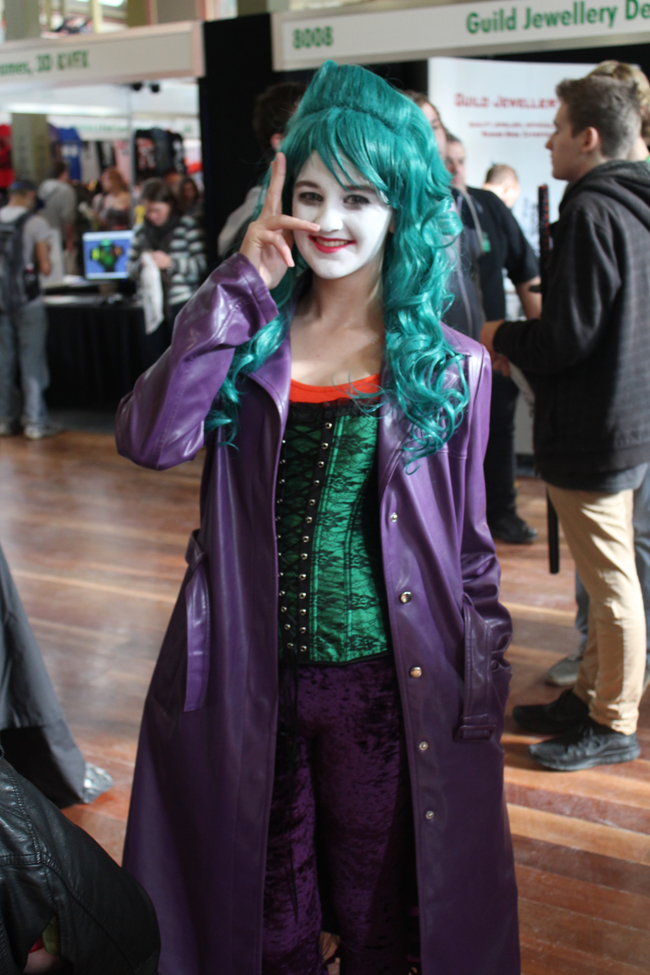 True story: In 2006, I was working in a place with some rather… obtuse people. One day, during a conversation about something I forget, I casually referenced the fact that Darth Vader is Luke Skywalker’s father. One of my coworkers became outraged because she hadn’t ever seen the original Star Wars Trilogy, and berated me for spoiling it. Again, this was 2006.

That experience turned me completely unsympathetic to people who want to claim spoilers after longer than a couple of months. Also, this is an amazing Chewie costume. 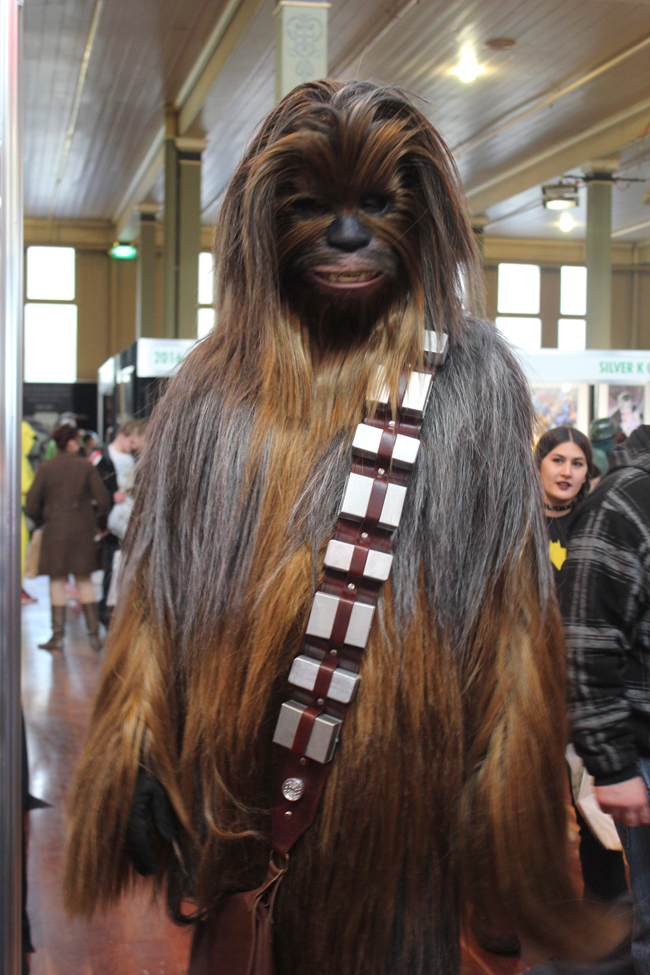 Do we love this genderbent Thor and Loki? I know I do. 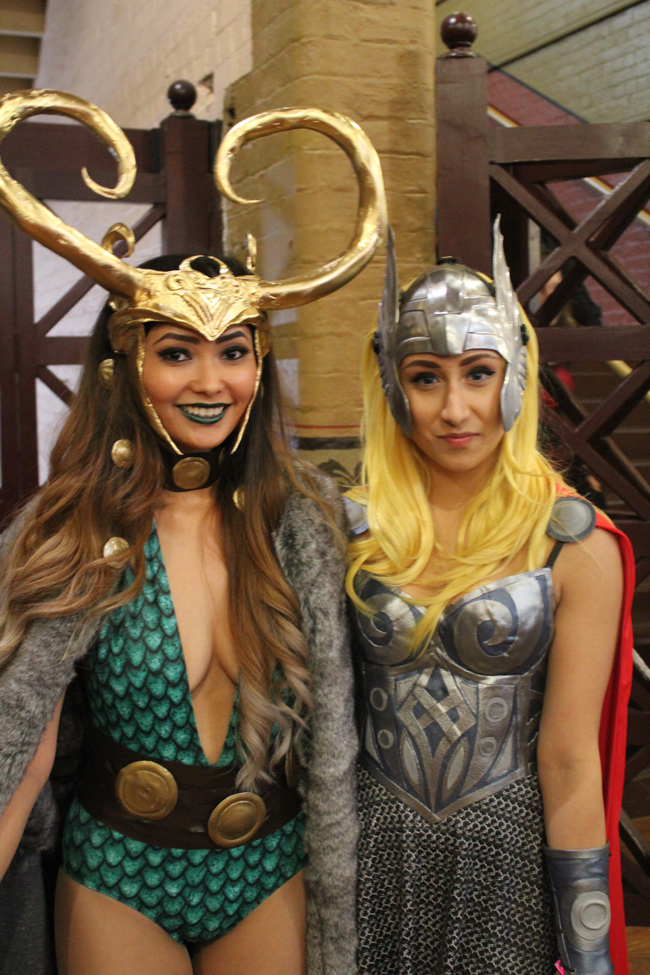 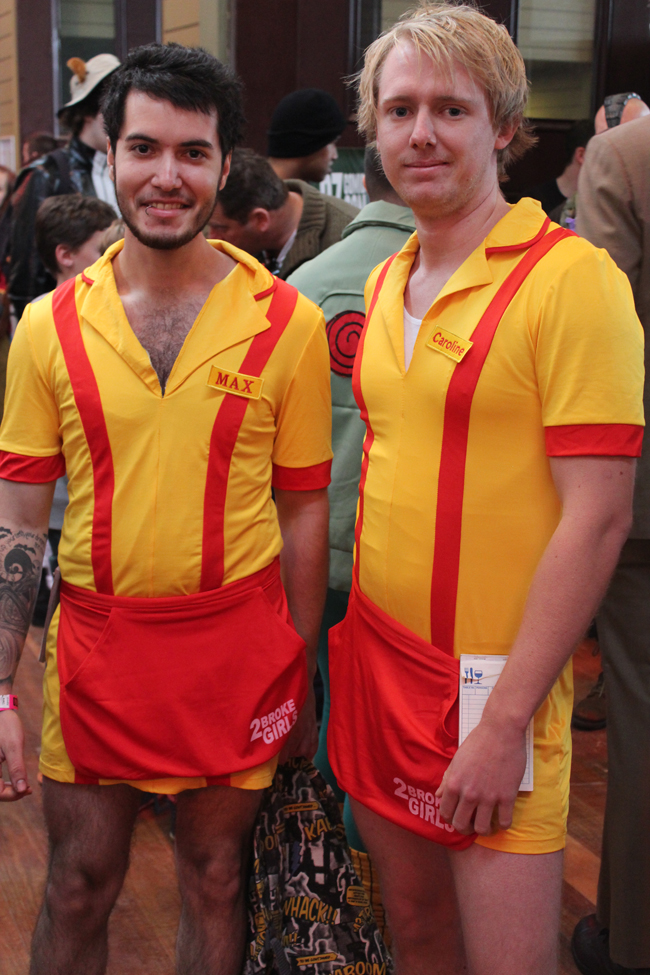 This is Boba Fett as The Rocketeer. Congratulations, this guy, you’ve made the single cleverest costume I’ve ever seen. 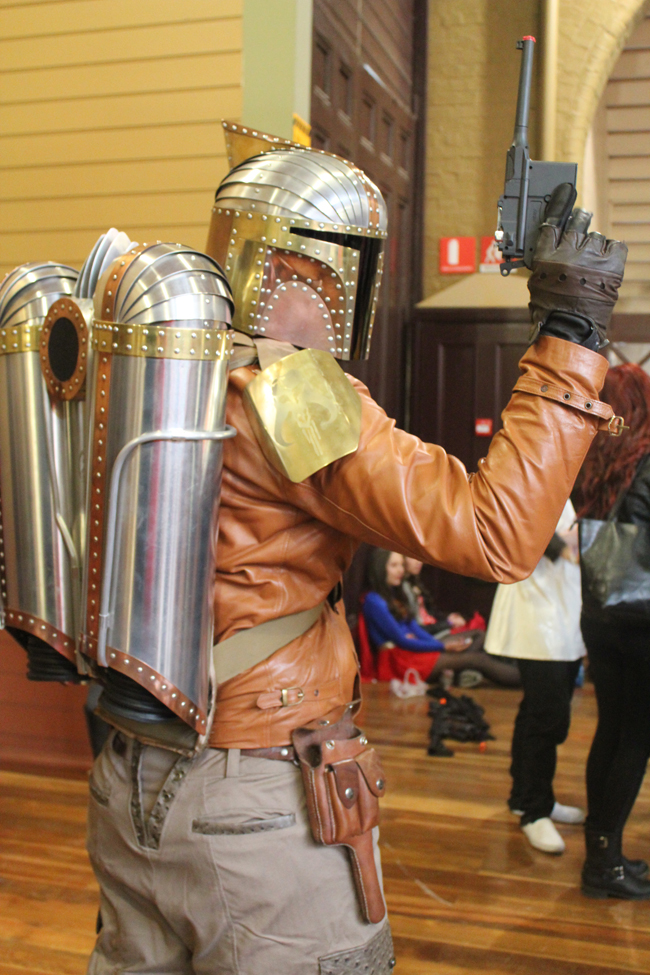 Remember when Johnny Depp was still good? This guy does, and his Edward Scissorhands costume is dope. 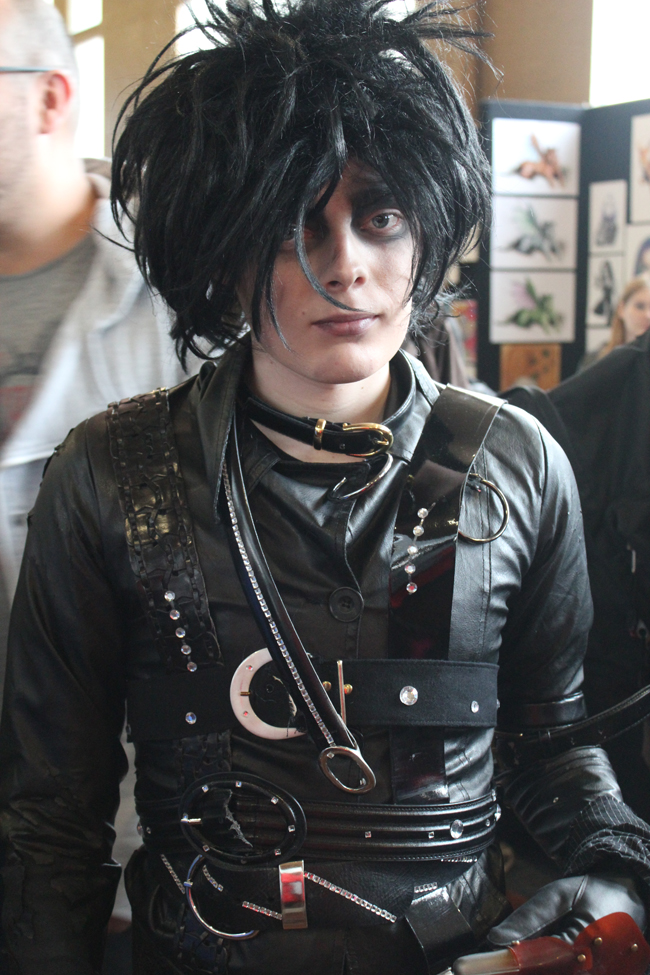 Yep. This is awesome. I mean Awesome-o. 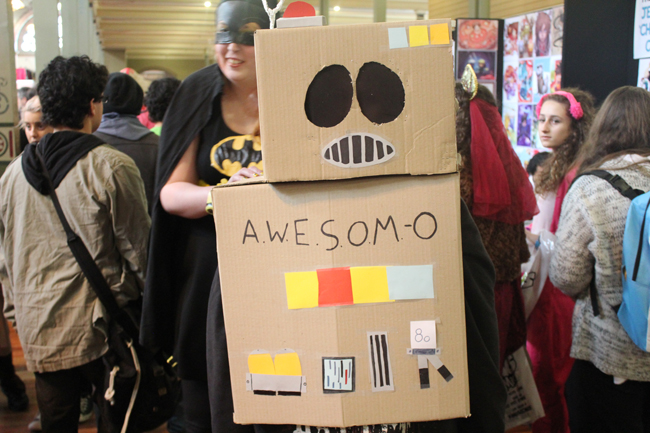 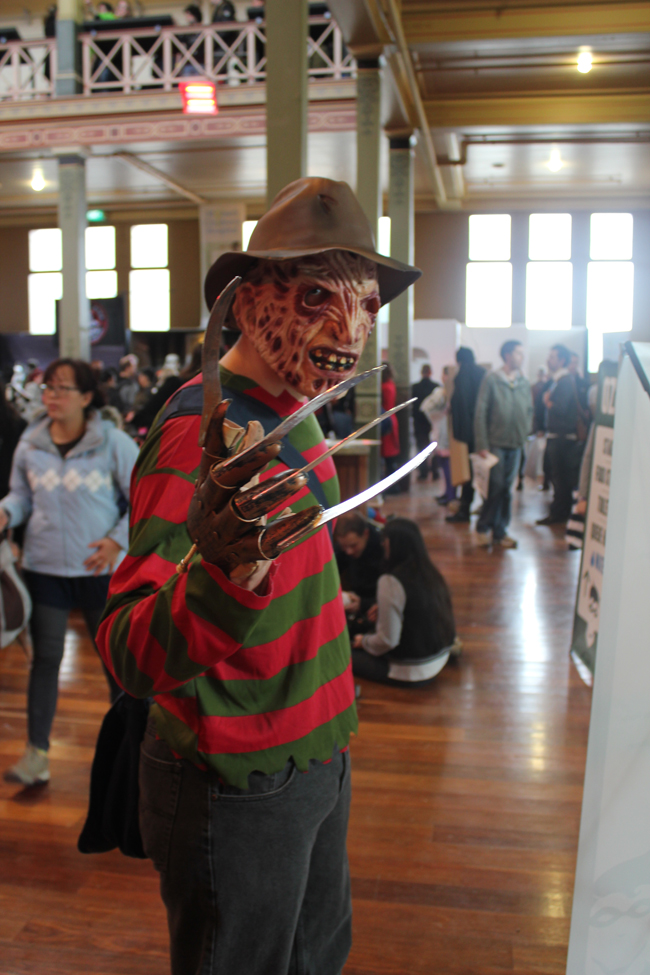 Do we really have to wait until 2015 for more Venture Bros.? Do we really? 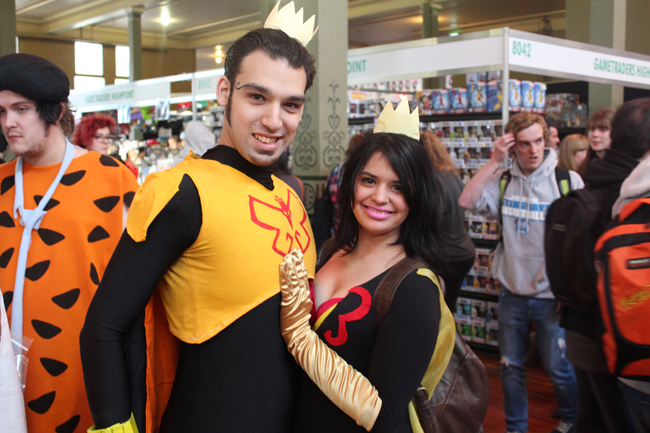 And finally, one more set of costumes for the readers to let me know who I’m looking at. Never let it be said I don’t give you a chance to look down your noses at me. 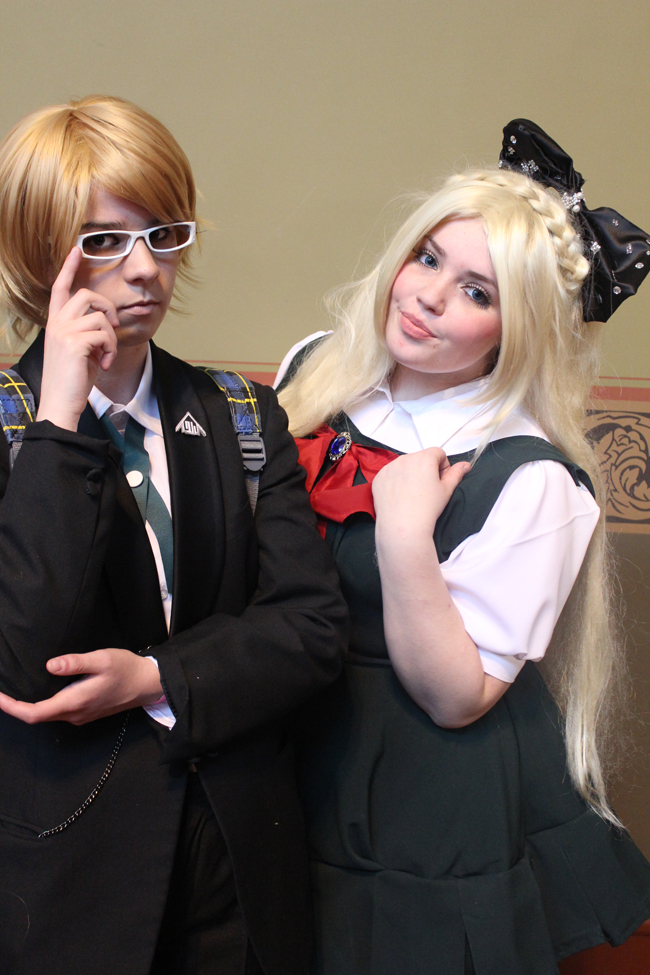 Tune in later for the second half of our Oz Comic-Con cosplay coverage.