Fading Embers is the crowning episode of Stories DLC — a set of narrative-driven scenarios for This War of Mine. First there was Father’s Promise, then The Last Broadcast, and the third piece portrays the story of Anja. Living in a warzone and carrying a heavy burden, Anja wrestles with herself to answer the question of what is more important — survival of human legacy or the survival of a man. 11 bit studios‘ Tomasz Kisielewicz served as a lead artist for This War of Mine and shares his story of the development in what follows.

When the roof over the famous Notre Dame cathedral in Paris was being ravaged by a massive fire, our team was just closing one of the early milestones in the latest addition to This War of Mine — Fading Embers, third episode of the Stories DLC. Here the whole world was rubbing its eyes in amazement, watching helplessly as one of the most iconic cultural objects of our civilization turned to ashes. Social media was in turmoil; people immediately started fundraisers to save the building, and every media outlet was covering the event in granular detail.

At this very moment, over a thousand kilometers away in the heart of Warsaw, our This War of Mine team was touched by this event in yet another way. We were just working on a DLC revolving around the theme of cultural heritage and its preservation during the war. The work on the script assumed tens of hours of reflection on the essence of cultural heritage and its value for society. We were constantly talking about the dilemmas we’d like to build around that subject, looking for effective ways to present the importance of heritage overall to our players. And here, right before us was the situation at Notre Dame.

Our feelings resembled those of the original This War of Mine team when the Ukrainian crisis began just a few months before the release of the base game. At that time, reality and the daily work on the game and its fictional world had dangerously paralleled each other. Tragic events like this constantly remind us about the responsibility resting on our shoulders when touching a subject like war and its consequences.

Almost five years later, This War of Mine with its new additions is still trying to address different questions, exploring various aspects of the war drama. This time with Fading Embers we wanted to look at the aspect of cultural heritage and its protection in the wartime, from a perspective of individuals and from the perspective of the whole community. We wanted to ask questions about how much one could do to preserve a cultural identity when it’s jeopardized by extreme circumstances of armed conflict. But the complexity of the theme we established aroused new challenges we needed to handle in the process.

What’s Your Take on Art

We wanted to touch a very nuanced and ambiguous matter of art, cultural heritage, and its value — a topic that can arouse extremely different emotions and opinions among audiences, especially when put in line with the theme of the value of life in itself. Our early internal surveys and focus tests revealed to us that, among the surveyed people, there were those who very much identify with the need to protect art while others had a rather ambivalent attitude towards it. We’ve also realized that there is a quite large group of people that might feel disturbed or even offended by putting human life in line with works of culture.

This proved to me that when creating main characters in the game, we should avoid decisively approaching the questions asked, but rather present different attitudes, clash them with each other, and let the player have his or her own take on them. Therefore, the people appearing in the story are, on the one hand, characters like Milena — a curator of Pogoren Museum that is fully oriented at protecting her collection above all costs — and on the other hand characters like Adam who’s fully devoted to helping orphans and who finds sacrifices in the name of some identity carriers rather unnecessary.

What was important at that point was to represent that clash of different attitudes. We’ve defined an “Attitude Triangle” in which we’ve put together fanatic, heroic, and pragmatic attitudes that were then represented by different people throughout the game. Players have to find their own way to survive amid these attitudes and decisions made during the game to decide the side they stand on. To achieve that we needed a specific type of main character. 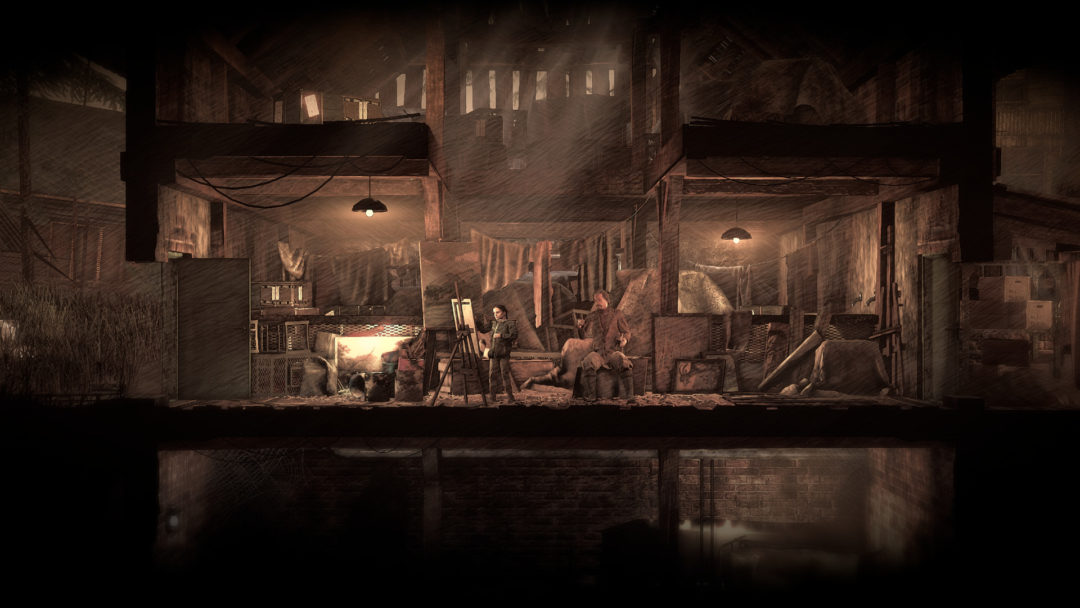 We’re following the story of Fading Embers through the eyes of Anja — a young girl, an orphan who had to become independent at a very early stage of her life and now struggles to survive in her old family house. She becomes a reflection of the attitude of the player who can shape her character with the decisions made throughout the game. It is up for the player to decide where to set the bar for sacrifices made in the name of the main mission and objectives.

Presenting works of art in a fictional world and building some dilemmas around them is not an easy task to handle. How do you evoke a feeling reminiscent of what happened in burning Notre Dame in a fictional world of Pogoren? Here every building and every piece of art is our developers’ creation, and even when it’s strongly influenced by some real-life references it still is an anonymous being in the eyes of our audience. To this end, we decided to build meaningfulness of art pieces in the game on a personal scope first and then try to transfer that sense to a scope of the whole community.

Our main character Anja has a small collection in her house — souvenirs of her late parents, sculptures made by her grandfather, a local artist. Her memories related to those items and a backstory of each one of them should be a reference point for the whole collection. Once we understand how important a trivial wooden horse can be for Anja, we should be able to better understand the value of the entire museum collection for the Pogoren community.

What we found fascinating to discover was how much an attitude toward individual exhibits may differ among the players. We observed this both during focus tests and in the opinions collected after the release. While for someone a spectacular golden-framed historical painting presents an incredible value, for others it may be way more important to save some inconspicuous documents that should never fall into the wrong hands. 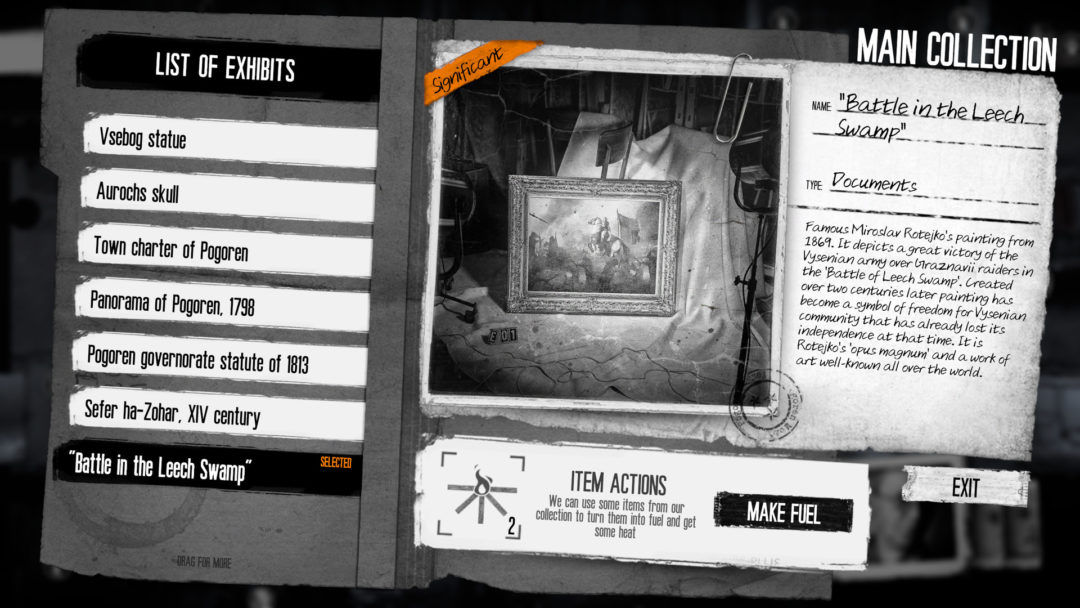 We’ve built our main mechanics in the game around protecting and managing the exhibits. But very early in the process, we had to determine what the collection would contain and what kind of exhibits we wanted to have there. To create dozens of items, we sought historians’ help in research to make the collection as reliable as possible. At some point we also had to figure out how to present our collection, and a new visual language had to be found to do so.

This War of Mine has some specifically defined means of expression. On the one hand, we have a slightly unrealistic style of the visual novel with a characteristic pencil sketch form; on the other hand, it is supported with real-life black-and-white photographs to portray characters or mark some important events in the game. Now we had to fit something entirely new into those guidelines.

We knew that each element of the collection should be properly described and illustrated. For some time I even considered using actual museum exhibits and taking photos of them to match our art style. However, this would mean some limitation regarding the collection’s content. We needed to have dozens of items and wanted them to be unique, well-related to this particular fictional place and its history. In the end, we decided to use our own custom 3D models of items and to style the renders to best match the original style of photography from the classic game. We wanted to achieve that “archive photography” style that, when put together with UI resembling a collection of case files, would stay coherent with our theme but also with the visual language of This War of Mine.

But the content of the collection itself was still to be defined. We wanted to have contrast; Anja’s private collection and the main collection of Pogoren Museum show different aspects of heritage. In the first one, we have some rather unleavened figurines, family souvenirs, photo albums, or amateur watercolor paintings. All very valuable on a personal level. The museum collection would contain monumental sculptures, paintings in gilded frames, medieval banners, and other exhibits representing centuries of Pogoren’s history. 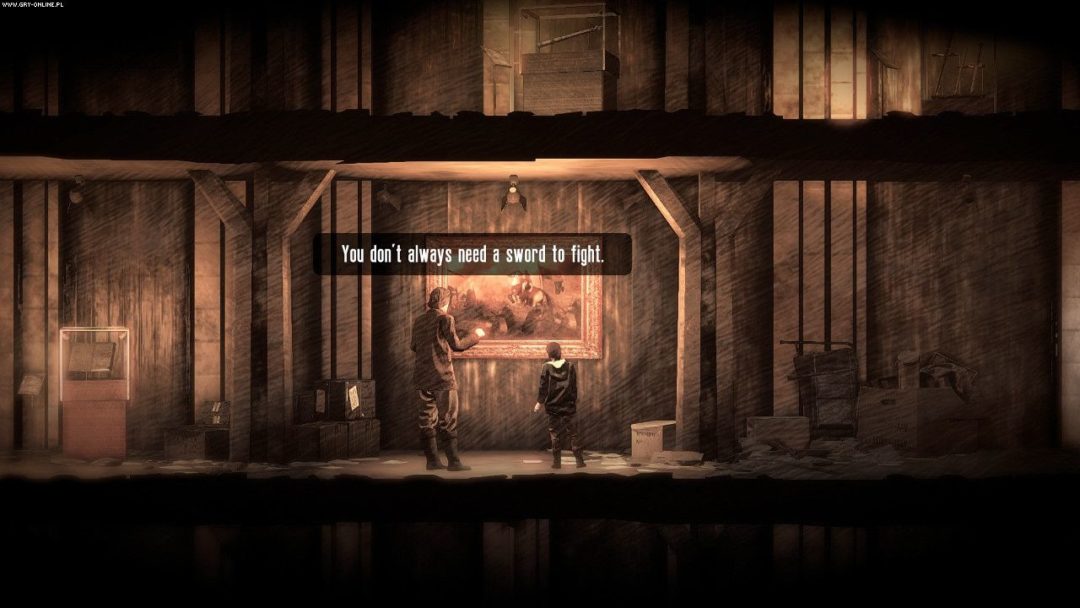 We also decided to maintain that same contrast in the design of our location. During the game, we change our shelter and Anja moves from her suburbs-located, modest family house into a monumental building. The museum’s strong, brutalist character was set to emphasize the significance of this building for the people of Pogoren and to amplify the significance of the collection it conceals. It is the biggest shelter we’ve ever created in This War of Mine, and while it was important for the mechanics we were providing, the museum also became a narrative device.

The main dilemmas and the choices we wanted our players to face revolved around our collection. Classic TWOM was a relatively non-linear experience but also did not have a specifically defined plotline. It mostly relied on the general idea of a group of civilians surviving the war. With each Stories addition we wanted to outline an interesting story but at the same time leave some of the decision-making freedom in players’ hands. In the second episode, The Last Broadcast, it worked quite well with the plot branching out in different directions at certain points. But here with Fading Embers, we wanted to create something completely new.

For a significant part of the game, there are numerous decisions to be made, and their sum is where the story would end. It is up to the player to judge how well we manage to avoid the classic “choose A for good ending, choose B for a bad one.”

Release of the game marks the end of a certain journey for us. Each Story DLC is different; with each one we tried to touch different aspects of war and complement the world of This War of Mine. At the time I am writing this text, the fire over the Notre Dame cathedral has been long gone, the area is still undergoing a major clean-up, and the recovery plans will hopefully soon be put in motion. But to see what happened to the Pogoren Museum and its collection, you will have to reach for Fading Embers. Spoiler Alert: Its fate lies in your hands.