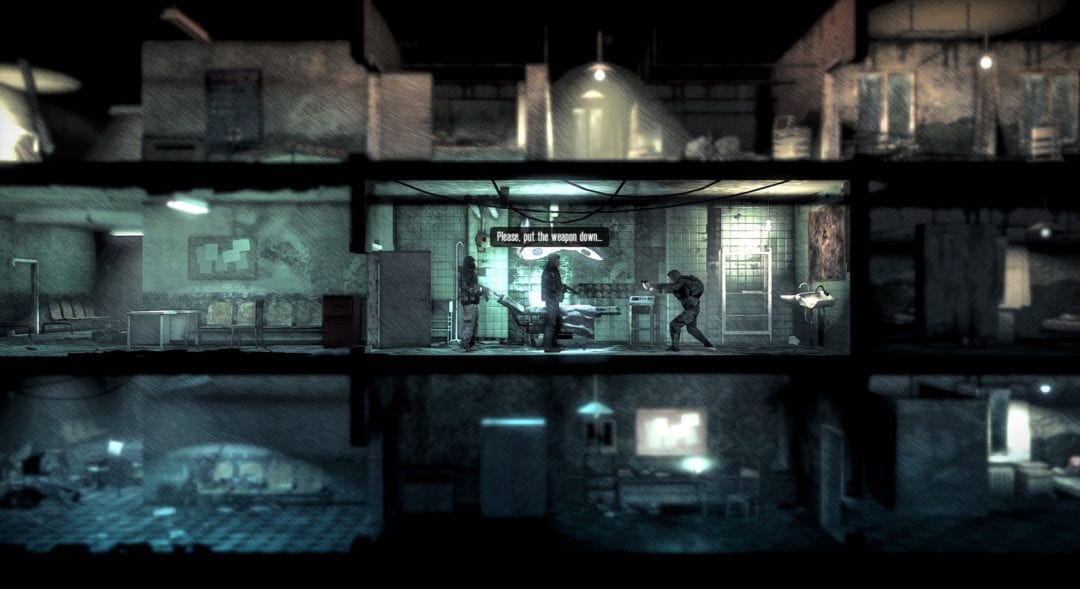 It’s been four long years since we’ve visited the war-torn Pogoren for the first time. Since the launch of This War Of Mine, the game’s grim world has been constantly expanding, allowing us to return to this bleak but unique place and examine the consequences of war from different perspectives.

“The Little Ones” DLC in particular focused attention on the challenges of growing up during wartime and was followed by an amazing cooperation with War Child, a nonprofit creating programs in multiple nations to help young people cope with the traumas of conflict. We raised over half a million dollars for children affected by the horrors of war all over the world. We were able to build an incredible community around the game, with a large modding scene that expanded it in even more new directions.

But even after all these years, we as developers feel that we have more to add in new and still unexplored ways. Hopefully “The Last Broadcast,” our latest installment in the This War Of Mine series, proves that there’s much more to be said about war as it is seen through the eyes of civilians.

A Tale from a War

In 2017, to mark the third anniversary of our game, we’ve released “Father’s Promise” — the first part of the This War Of Mine: Stories expansion. The initial idea was to create entirely new scenarios with a more narrative-driven approach through collaboration with critically acclaimed authors and writers. The script for the first scenario was based on a short story by Polish writer Łukasz Orbitowski, and an audiobook version was released alongside the game.

“Father’s Promise” is built on a strong foundation of complex characters and plot twists. But the way the narrative line was drawn created a new danger for us. We  risked losing an element that was always deeply embedded in This War Of Mine: non-linearity.

The world in the main game has always been ambiguous and obscure, full of human stories whose exact course and conclusion in many cases were meant to be borne out by the player’s imagination. Non-linearity gives the player a stronger role in the story. On the other hand, our new episodes told complete stories with a clear beginning, middle, and ending that would be satisfying for every player regardless of distinct decisions made during each playthrough.

We wanted to be sure that the story in “The Last Broadcast” was deeply ingrained in the Pogoren world and atmosphere we all knew, with difficult moral dilemmas and ambiguous decisions to be made. But we also wanted to have a coherent, branching story in which every single path has a believable and satisfying conclusion that stands in line with the main theme and message of the game.

The Price of Truth

To deliver the story of “The Last Broadcast,” we joined our forces with Meg Jayanth, writer of 80 Days. From the very first pitch it was clear to us what we wanted to say. We wanted our players to answer a simple question: “How much would you really be willing to sacrifice to spread the truth in the face of war atrocities?”

To translate this into the language of our game, we needed strong characters with a background that would justify that balance at the verge of truthfulness — messengers whose voices shape the reality around them. Radio hosts reporting on the war were the perfect conduits for our players.

Managing a radio station becomes a central part of This War of Mine in “The Last Broadcast.” Our main characters, Malik and his wife Esma, gather information, broadcast news, and report on events that may save other civilians, but also puts their lives in jeopardy. Malik’s words can be uplifting and crucial for the survival of the others, but that comes with a great responsibility that we wanted to put into players’ hands. His voice does not escape the attention of the enemy. Soon the army is looking for Malik and it’s up to the players to decide how much they are willing to risk in order to spread reliable reports.

In a day and age where our understanding of the world around us is strongly influenced by news provided by biased sources, we wanted to ask a question about the credibility of the words one can hear on the radio.

Beyond The Pencil Hatch

In rebuilding large parts of the game to accommodate the new mechanics in “The Last Broadcast,” we risked upsetting long time players deeply familiar with the entrenched style of This War Of Mine. The hope was that in taking that risk, “The Last Broadcast” would be so much more than just another cash-in DLC. It could be an expansion that stands very well on its own. In order to properly deliver the message of our game and carry the weight of its subject, we had to create new channels of communication with our players.

For example, having a disabled character (Malik) in the shelter was crucial to our story. We needed that extra distance in the information filtering process with another character (Esma) passing news and reports to that isolated space. The truth is written somewhere in between. But that meant we had to prepare a whole new set of animations and behaviours for our disabled character. We had to make tough decisions on what kind of activities we could have that character participate in. To add even higher stakes to the process of passing information, he had to be somehow cut off from the outside world and we had to limit his mobility. But drawing that line of what he can or can’t do was tricky. We wanted to be respectful and make Malik believable, but also we didn’t want to undermine our theme and message in order to fully match the demands of realism.

Another thing was the introduction of our Dilemma mechanics. To better visualize choices made during the game, we have for the first time introduced drawn illustrations into the gameplay of This War Of Mine.

Previously we used photos, which introduced a feeling of realism into the game. But I personally felt like we had to go a different way this time. We were introducing new mechanics, so we felt they should be accompanied by a new visual language. Players are supposed to make decisions based on Esma’s observations and assumptions; the consequences she pictures in her head were not supposed to be certain. We needed something dreamlike, more oneiric. Drawn illustrations seemed like the right choice.

In the end, we feel that the solutions we used in our latest story had a very strong and positive influence on the narrative layer of our game, adding a whole new level of depth to a four-year-old title.

While finishing our work on “The Last Broadcast” and in the post-release aftermath we came to some inspiring conclusions regarding the ways we can expand these new mechanics and push the non-linear aspect of our game even further in a way that’s never been done before and that would perfectly accommodate the story we want to tell with our classic This War Of Mine mechanics. But that actually is a whole new story, one we’ll tell later this year. Stay tuned.