Odds are good that, to an outsider, one of the most peculiar aspects of tabletop roleplaying is its way of generating random numbers. Whereas most board and wargames use “traditional” six-sided dice whose general shape and appearance hasn’t changed for a few thousand years, RPGs – starting with Dungeons & Dragons in 1974 – have a three decades-long love affair with dice of different polyhedral shapes.

Precisely how, when, and by whom such dice were introduced into proto-roleplaying is a matter of some debate. David Wesely, whose contributions to the prehistory of roleplaying are now well established, claims to have “invented” – or at least “re-invented” – the use of such dice in gaming. In 2006, on the forums of the RPG collection website The Acaeum, he claimed: “I would like to lay claim to having ‘invented’ polyhedral dice. I was the first person to USE what were then being sold as ‘Models of the five regular polyhedra’ (for mathematics teachers to show to their students), AS DICE. I have since seen a book that claims that the Japanese were already using three D-20s, numbered 0-9 twice, to generate 3-digit decimal random numbers at some time before 1976. So it may be that they also invented this use for polyhedra, but I was unaware of them so I am at least an independant [sic] re-inventor. And it was my introducing the D4, D8, D12 and D20 to our gaming group in 1965 that led to them being used in RPGs and D&D.”

Meanwhile, D&D co-creator, Dave Arneson, who had been a player in Wesely’s free-form wargames campaigns, is sometimes credited with having first encountered polyhedral dice while visiting England and brought them back with him to use in his Blackmoor campaign. Similar stories are told about D&D‘s other co-creator, Gary Gygax. The truth of the matter may never be known with certainty and, like many aspects of early roleplaying history, it’s quite possible that several people independently hit upon similar ideas.

What is certain is that Volume 1 of the original Dungeons & Dragons rules included among its “recommended equipment” four-sided, six-sided, eight-sided, twelve-sided, and twenty-sided dice — all of them regular (or Platonic) solids. Interestingly, the rules at that time only made much explicit use of six and twenty-sided dice, with the others being relegated to very marginal uses until the release of the game’s first supplement in 1975. Let’s take a brief look at each of them. 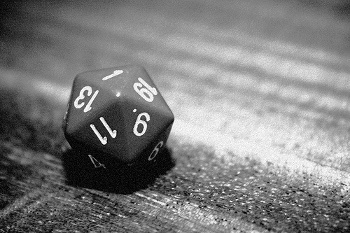 D4: The lowly four-sided dice is what is known as a tetrahedron, associated in some schools of ancient philosophy with the element of fire. The earliest D4 had their numbers on the flat edges of each side, while later versions had their numbers near the points. They have long been the polyhedral dice most likely to cause injury when stepped upon.

D6: The “traditional” six-sided dice (or cube or regular hexohedron) has existed in its present form since at least Roman times. Because of this, there’s much less variability in their appearance and form, with opposite sides of the dice equalling seven, whether the dice use pips or Arabic numerals.

D8: The eight-sided dice or octohedron was associated with the element of air. This dice has the potential to cause injury if stepped upon, although the D8’s points tend to be less tall than those of the D4.

D12: The twelve-sided dice is known as the dodecahedron and was associated with the mysterious fifth element (quintessence or ether) that supposedly suffused the heavens beyond the sphere of the moon. Of all the polyhedrals, it probably sees the least use, which probably explains why many gamers, myself included, find it so strangely appealing.

D20: The twenty-sided dice is the icosahedron and associated with the element of water. The earliest D20s were numbered 0-9 twice, allowing them to pull double duty as percentile dice when necessary. Of course, the 0-9 scheme required that the numbers be inked in two different colors to differentiate a result of “1” from that of “11.” Alternately, a second dice — usually a six-sided one — could be rolled along with the D20, with an even result (or an odd one, depending on the player) indicating that the number on the D20 be read as-is and an odd result indicating that it should be read as +10 its value. In 2003, a Roman era icosahedron dice sold for nearly $18,000 at an auction in London.

Many other sorts of polyhedral dice exist for use with roleplaying games, the most commonly encountered being the ten-sided dice. Unlike the dice mentioned above, the D10 is not a regular solid and has no ancient pedigree, being a late 20th century invention. Other dice include the D3, D5, D7, D14, D16, D24, all of them invented by Lou Zocchi, whose dice manufacturing company, Gamescience, was a pioneer in producing “precision” dice that produce a more even distribution of results. Zocchi, who holds a patent on the one hundred-sided “Zocchihedron,” is famous for his discourses on the flaws found in other companies’ dice manufacturing process, as seen in these videos.

With so many different sizes, shapes and colors available, roleplayers have long been very fond of their dice, treating them as a combination of necessary hobby tools and fashion accessories. Given this almost emotional place in the hobby, it’s little surprise that gamers often develop many superstitions about dice, finding some “lucky” and others “unlucky” (proof, according to Lou Zocchi, that many dice are badly made and produce uneven results). Gamers also argue about the “best” way to roll dice — whether to use one hand or two, how long to shake them before actually rolling them, etc. There are even whole schools of thought on how to handle dice that accidentally roll onto the floor (read the result or re-roll?), land cocked, and so on.

An entire culture has grown up around these random number generators, making dice one of the hallmarks of tabletop roleplayers the world over. Gamers love their dice and, from my experience, there’s something deeply satisfying about the tactile experience of picking them up and rolling them, knowing that success or failure can hinge on the result that appears when the dice land. Much as I love electronic games of all sorts, including many computer RPGs, I do miss rolling dice when playing them. Having a program generate random numbers for me simply isn’t the same, which is why I’ll never trade away the experience of doing so. Rolling dice is deeply embedded in the DNA of the hobby; may it ever remain so.