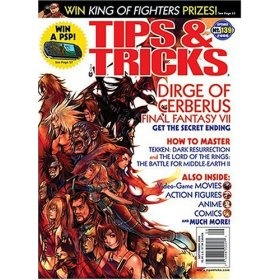 Gaming magazine Tips and Tricks was terminated by Larry Flint Publications (LFP) and will release its final issue next month. In its place, a monthly codebook will be published to support the dwindling gaming audience that lacks a proper internet connection.

The executives at LFP intended on firing everyone on the magazine’s staff while they were at E3 promoting the magazine, not realizing that E3 was not for another two weeks. One freelancer received a check from them with a note reading, “Tips & Tricks magazine is ceasing its publication of monthly issues. … Thank you for your contribution to Tips & Tricks Magazine.” It was then confirmed in a meeting with the magazine’s top people that the next issue would be their last. The whole incident comes a mere two months after the magazine relaunched its website. Sadly, the industry has lost another print publication in the war against the internet uprising.