At its core, Titans is the story of a found and unconventional family. This makes a certain amount of sense, given the origins of the property. The Teen Titans team was launched in a 1964 issue of The Brave and the Bold when DC Comics was hoping to capitalize on contemporary youth culture. The group served as a home for teenage superheroes, primarily the sidekicks of established heroes like Robin, Superboy, Wonder Girl, and Kid Flash.

The 2018 DC Universe live-action adaptation of that comic book has its own distinct aesthetic. The show is a lot darker than its source material in terms of both visuals and story content. This is the series that famously announced itself to the world with a trailer that included the sentiment, “Fuck Batman.” However, Titans retains the familiar thematic dynamic of young people forging their own identities and finding a home away from home.

The plot of the first season of Titans is largely driven by Rachel Roth (Teagan Croft), a teenager who develops powers she cannot control. The pilot upends Rachel’s life, revealing that she has become a target for a vast and sinister conspiracy and that the woman she thought was her mother (Sherilyn Fenn) isn’t even related to her.

Over the course of the season, it becomes clear that this conspiracy is organized at the behest of Rachel’s biological father, the demonic Trigon (Seamus Dever). Trigon’s plan is to use his daughter as “a doorway that he can walk through” to invade Earth and possibly consume the rest of the universe. 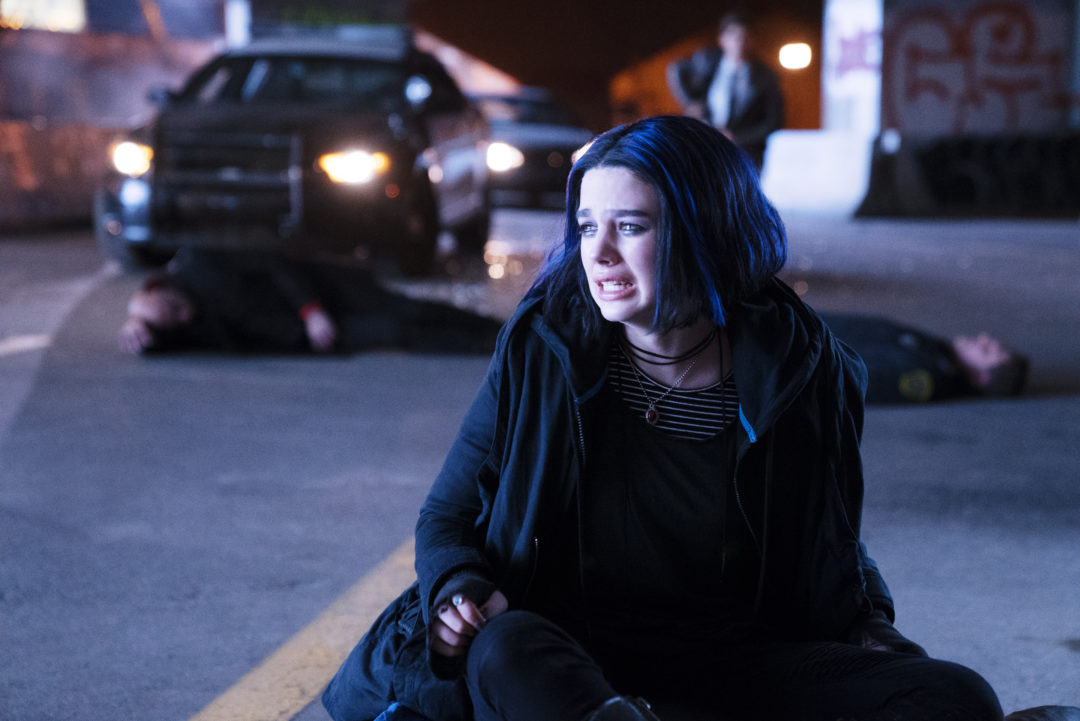 If Rachel’s plot is the driving force of Titans’ first season, then Dick Grayson (Brenton Thwaites) is its protagonist. Dick is introduced as a Detroit police officer who left Gotham to distance himself from Bruce Wayne. Dick had served as Robin to Bruce’s Batman for quite some time, but the relationship between the two men has soured.

Titans underscores the unhealthiness of that relationship. As with Trigon, Bruce’s interest in his surrogate child is primarily utilitarian. “Batman needs Robin,” argues Jason Todd (Curran Walters), Bruce’s replacement for Dick. “Why do you think he makes us wear those lame colors? Because we’re drawing fire.”

Jason may be oblivious to the cynicism of using a child as a decoy to draw live fire, but Dick seems inured. In the season finale, Dick imagines a dark future in which Jason has fulfilled this purpose, ending up in a wheelchair as a result of an encounter with the Riddler and seemingly discarded by his adopted father.

Bruce offers Dick and Jason the trappings of a seemingly normal life. After the death of his parents, Dick wants to remain in Haly’s Circus with the people that he deems to be his extended family. Both social services and the circus itself believe that Bruce can offer Dick more stability, structure, and  security. Bruce is a lonely bachelor in a giant mansion with his British manservant, but he at least looks like a traditional father figure. 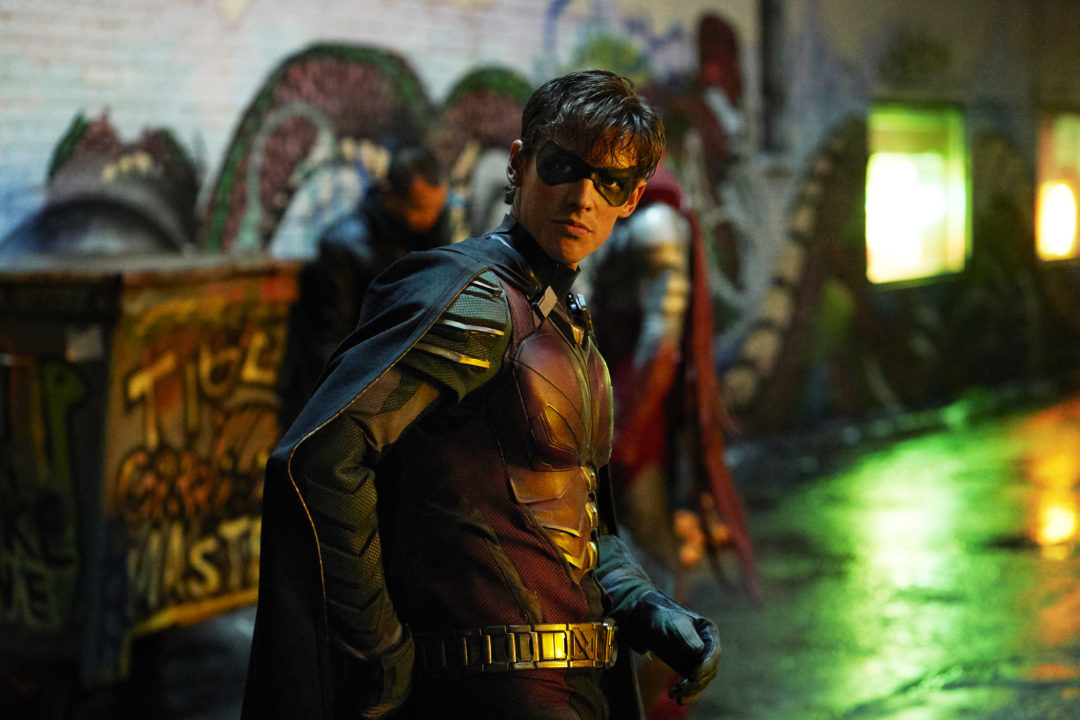 In Titans, the trappings of traditional familial structures often mask something more sinister and corrosive. Hank Hall (Alan Ritchson) is recovering from abuse he suffered as a child at the hands of his football coach. Dawn Granger (Minka Kelly) worries that her mother (Marina Sirtis) plans to return to her abusive husband. The first half of the season finds Rachel and Dick pursued by a group of assassins posing as a family. Except for Biff (Logan Thompson), the members of this family have no names, only the roles assigned to them: Mom (Melody Johnson) and Sis (Jeni Ross). When Dad (Jeff Clarke) is killed early in the season, a replacement Stepdad (Zach Smadu) is drafted in.

It is perhaps revealing that the members of this assassination squad are recruited directly from Agnews Asylum, suggesting the Nuclear Family’s level of wholesomeness borders on the psychotic and masks something decidedly less romantic. For all that Titans embraces the dark visual palette of Man of Steel or Batman v Superman: Dawn of Justice, the series seems much more anxious about the horrors buried beneath seemingly cheerful exteriors.

Even beyond the use of the Family, Titans positions the traditional family home as a dangerous location. Late in the season, Rachel is reunited with her biological mother, Angela (Rachel Nichols), who takes Rachel to a secluded and idyllic family home that looks like it could easily belong to the Family. It is warm and loving, in stark contrast to the seedy motels and sterile penthouses that Rachel has been living in over the course of the season. But it’s too good to be true. Inevitably, it is revealed that Angela has betrayed Rachel and intends to offer her daughter to Trigon.

In contrast to these toxic and traditional family units, Titans offers a couple of unconventional families. Gar (Ryan Potter) is introduced living with the Doom Patrol, who are almost a parody of the sort of suffocating conventional family unit represented by Trigon and Angela or Mom and (Step)dad. They’re a collection of weirdos and freaks who have found a way to celebrate their differences; none of the family dinner scenes that punctuate Titans are as joyous as the one involving the Doom Patrol. 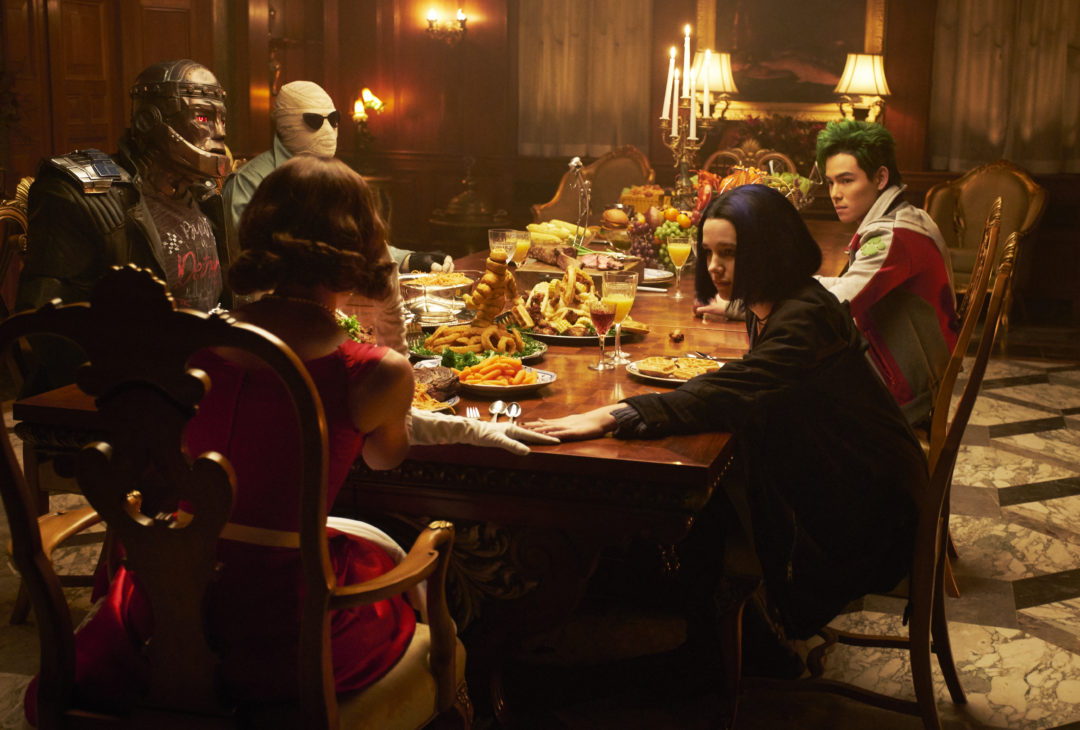 Even then, Titans remains wary of structures that mimic the family unit too closely. Niles Caulder (Bruno Bichir, recast as Timothy Dalton for the spin-off) reveals himself to be another utilitarian patriarch when he tries to operate on Rachel without her consent. Gar is shocked to see his mentor and father figure acting in this way, and that’s part of the reason that he leaves the Doom Patrol to join Rachel and Dick.

Over the course of the season, the Titans form their own family unit. Dick and the amnesiac Kory Anders (Anna Diop) serve as parents, with Gar and Rachel as the young wards in their care. While Dick, Kory, and Rachel initially seem reluctant to commit to this, eventually they accept their responsibilities to one another. Titans contends that each member’s experiences with an unhealthy or toxic family unit proves a shared frame of reference that allows them to understand each other.

“As of right now, we are a group of people who share a common enemy,” Dick warns the group midway through the season. “Which makes us what?” Kory inquires.

The answer, Titans suggests, is a family.