As I mentioned in the The Walking Dead video, I solo-developed some adventure games back in the day with Adventure Game Studio. And they got around, I suppose. You can still occasionally search for them on something like Tumblr or Deviantart and find bad drawings of two of the characters snogging. I haven’t made one in a while, though, because frankly I grew disillusioned with straight adventure games and their limitations.

When I was a kid I played little else, suckered in by early Lucasarts stuff like Maniac Mansion and Monkey Island. I’d be drawn in by the characters and the story, reading the dialogue aloud to myself in my room in the days before CD voice acting. I saw little appeal in your Dooms or your Contras where the story was a screen of scrolling text every twenty levels to put a shine of context onto the endless violence. So when I was in a position to make my own games, I made adventure games that appealed to the same storytelling instincts that made me want to write novels.

But as adventure games decreased in popularity and I expanded my horizons into games like Half-Life and Silent Hill, I realized where I’d been going wrong, and the fundamental flaw of the traditional adventure game. They weren’t “better” than Doom and Quake or whatever, they were the opposite side of the same coin: All story versus all gameplay. I realized that where videogames came into their own was the exploration of a new form of storytelling, one that was enhanced by gameplay. And so I became a game critic. And then everyone had lemonade.

The point is that the traditional adventure gameplay is rubbish. Oh, sometimes they’d come up with a really clever puzzle like using insults to win sword fights, but these were the exceptions rather than the rule. Most of the time the inventory puzzles only served, as in The Walking Dead, just as a token effort to be able to call itself a game rather than a linear story with an unusual pause function. And that’s why my solo development output moved away from adventure games to explore other ways to make the practical element absorbing while still placing the all-important emphasis on storytelling. That’s why I started making stuff like Poacher, and Art of Theft, and Adventures in the Galaxy of Fantabulous Wonderment, a game I’m of a mind to one day remake to be less terrible.

And it seems I’m not the only solo developer to have thought along these lines, if Lone Survivor is any indicator.

My original idea for last week’s Zero Punctuation was to spend half the time on The Walking Dead and the other half on this game, but while I was writing about The Walking Dead something triggered the ranty muscles and I found I had more to say than I thought. But if I don’t acknowledge Lone Survivor soon then I’m going to be driven quite mad by all the people recommending it to me. Usually by describing it as a 2D Silent Hill 2, and Silent Hill 2 will never be able to fully clean my bodily fluids out of its hair. 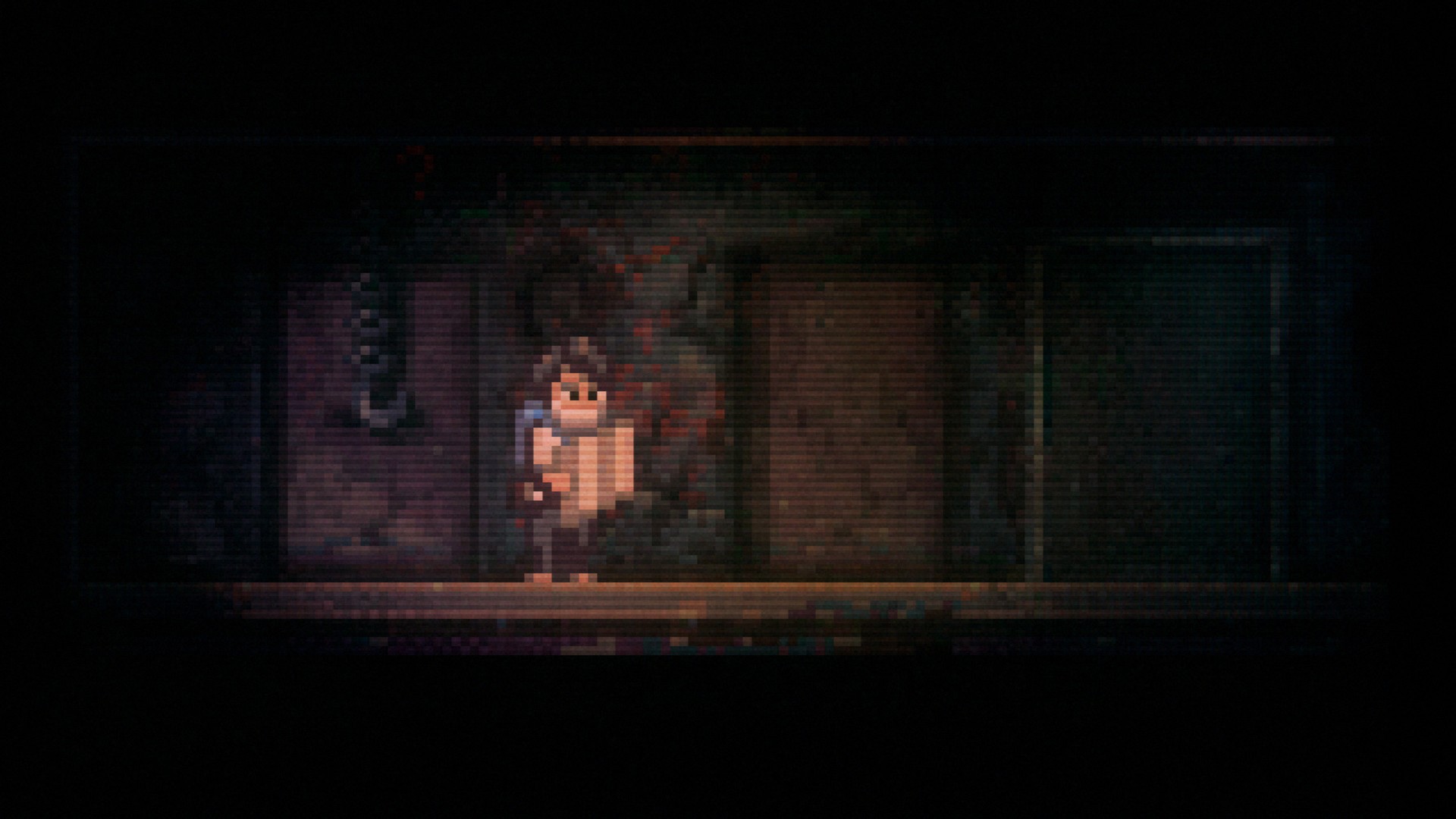 I’m not sure I agree with the Silent Hill 2 comparison, though. It’s true they’re going for a similar sort of atmosphere with being alone in monster-filled abandoned places and all that, but they play out distinctly differently. Silent Hill 2 was basically a retelling of the Orpheus myth with the hero journeying from safety to the depths of the underworld to rescue the missus, and Lone Survivor is somewhat uniquely structured more like a series of circles than a linear path. You start smack bang in the middle and venture out to explore the surrounding hellworld, constantly returning to the starting point. It’s like one of those Spirograph patterns.

The reason why you keep returning to the centre point is to answer your character’s need for sleep and food. And if there’s one thing that might get annoying about Lone Survivor, it’s the protagonist demanding you look after his physical needs every five bloody minutes. The lad must have the metabolism of a pygmy shrew given how often he needs a bite to eat. Of course, this may just have been my playthrough, because somehow I managed to completely overlook the can opener early in the game, and ended up with a massive bounty of potential meals that I couldn’t get at. Every time my bloke complained all I could do was shove another cheese cracker in his gob.

But the game doesn’t massively penalize you for not eating and sleeping properly, you apparently just take a hit to an invisible stat that indicates your mental health, and you need to keep the mental health nice and smooth to get the better ending. Another thing that makes the mental health take a hit is shooting the enemy monsters dead, and I’m not sure I like that from a thematic standpoint. I would argue that when you’re faced with twisted monstrosities that keep running up making unnatural noises and trying to puke on you to death, opening fire is a perfectly sane and rational response. See, this is interesting. Eternal Darkness did the exact opposite; you got a sanity boost if you went out of your way to execute fallen monsters. Partly because you could then continue with the knowledge that the nearby environment is incrementally less fucked up, and partly because it’s just therapeutic to beat on things for a while, y’know.

It does make sense from a gameplay perspective, though. Getting the better ending is the greater challenge, and not killing anything certainly is difficult. You have to spend the whole game distracting the things with consumable items like rotten meat and flares. It can get a whole lot more arduous, and it represents an oft-overlooked facet of the challenge aspect of games: challenging not the player’s skill, but their willpower. How long will you continue the arduous routine of hiding and distracting when there are some perfectly efficient baser instincts you could be falling back on?

Lone Survivor is by Jasper Byrne, can be found on Steam, and is worth checking out. I’m not just saying that out of solo developer solidarity, ‘cos it is unique. I wouldn’t say it’s particularly scary, that’s another thing that justifies the Silent Hill 2 comparison – it’s more about the atmosphere of despair and mystery. Still, it can be absorbing. I’d certainly forgive you if you found it wasn’t to your taste. Eventually. Send me flowers, maybe.