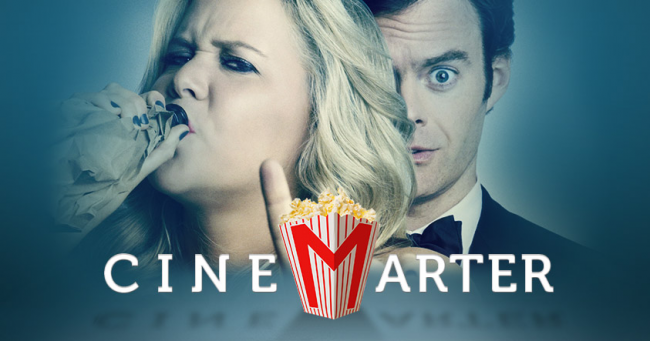 Trainwreck is a testament to the idea that a comedy can succeed purely on the basis of its, well, comedy. It can be a movie that has so many flaws that when you list them on paper you find yourself in shock, but if it’s making you laugh enough while it’s playing, you’ll still have a good time. This is true of Trainwreck, which is so incredibly funny despite having so many glaring flaws. You’ll be laughing for most of its running time, but looking back at it you’ll start to notice that it’s not the greatest thing in the world.

Amy Schumer makes her big-screen leading role debut in Trainwreck, playing Amy Townsend, the titular “trainwreck.” Schumer also wrote the film’s screenplay. As a kid, Amy was told that monogamy isn’t a good thing, and as such hasn’t been able to maintain a proper romantic relationship with anyone. She’s now a writer, and is told to do a piece on Dr. Aaron Conners (Bill Hader), who is essentially her exact opposite. If you’ve seen one romantic comedy in your life, or if you’re good at guessing, you’ll probably figure out what happens from here. 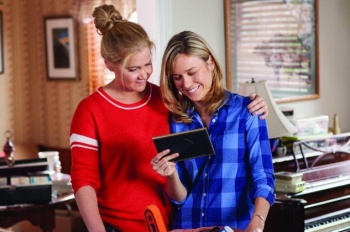 The amount of cliche one can find in Trainwreck is a little startling. This is your standard rom-com, just with a lot more profanity and intelligence. Will Amy and Aaron fall in love? Of course they will! Will there be a big fight over something ultimately meaningless that will make us question whether or not they can be together? Duh! Will one of the two make a big, last-ditch attempt to salvage the relationship? What do you think? You could write this sort of thing in your sleep.

What requires more talent is in the individual scenes, in the dialogue, and at the pointed humor aimed at various targets. Schumer’s style of comedy isn’t exactly the nicest out there. It’s sharp, it’s a little controversial, and it’s dirty. Most of it works. There are a few jokes that don’t really hit, but that’s true of almost every comedy ever. Some scenes also go on way too long, with characters just continuing to rip on the same subject way past the point that it’s enjoyable.

It has a sharp script, a funny lead, and a ton of good supporting work.

That last part might be a problem that should be aimed at the film’s director, Judd Apatow, who has only directed one movie under two hours long, and even it ran really close. Trainwreck plays for just over two hours, and about twenty minutes of it could have been cut. Comedies rarely deserve to play as long as Apatow’s do, and they lose their value when they run for too long. The same is true of horror movies; far more often than not, shorter is better.

One of the best parts of Trainwreck comes from a very tall person, though: LeBron James. In a role much greater and lengthier than a typical celebrity cameo, James steals almost every scene he’s in. No, he’s not a good actor, but that doesn’t matter. His dialogue is great, some of his facial expressions are wonderful, and certain running gags involving the fictionalized version of him are great. The same is true of John Cena, who appears in a few scenes early on that are just so funny, especially coming from John Cena – assuming you know who he is, of course.

Amy Schumer isn’t going to be winning any Oscars for her dramatic acting – this is the main reason any attempt at drama in Trainwreck fails – but she’s as funny as they come, and that’s what counts. She can tangle with the best of them in the film’s funny scenes. Bill Hader is really funny, too. Tilda Swinton plays Amy’s editor in a really good role, and Brie Larson shows up as Amy’s sister. It’s a strong cast filled with people who are good at comedy.

Here’s what it comes down to when we’re talking about a comedy: Are you laughing far more often than not? With Trainwreck, the answer is “yes,” and an emphatic one at that. It has a sharp script, a funny lead, and a ton of good supporting work. It doesn’t really matter that its plot is a walking cliche, that it’s too long, or that any attempts it has at drama fall flat. It’s funny from start to finish, and as such is a good comedy and one that’s easy to recommend.

Bottom Line: Trainwreck is funny enough to forgive it for its numerous shortcoming.

Recommendation: Good comedies don’t come along particularly often, so you should probably see Trainwreck, especially if you like Amy Schumer’s brand of comedy.