With the passage of time, often our nostalgia can blind us to the merits, or faults, of beloved, and sometimes dreaded, anime. Through this series I plan to take an objective look at these anime so that those who might be interested have a reference point before they devote their time to a show or film. In order to be considered for these reviews, the anime in question must be at least 15 years old. The final rating of the show will be based on five components: story, visuals & animation, voice acting, music, and lasting impressions. I hope this series will be a guiding light to those who have an interest in the history of animation, or are even just big fans of a certain era of anime. If you have any suggestions for what series I should cover next, or just want to discuss your favorite anime, sound off in the comments below! 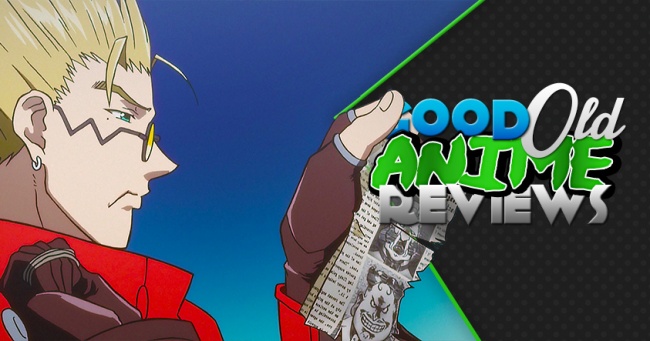 Trigun was something that was on my list for a very, very long time. As a self-proclaimed fan of 90s anime, Trigun was a necessary pit stop on my quest for discovering the best anime that decade had to offer. After 26 episodes (and a film that came much later), I can say with confidence that Trigun was worth the effort.

My experience with Trigun was very similar to how I approached Akira, as I was able to read the manga before watching the series (although not the Trigun Maximum series). This allowed me to get a glimpse of the series’ origins before taking the visual plunge. It’s not a bad way to approach the show, as it adds a bit of nuance to the experience, but nothing will be lost from viewing the show without reading first except for a greater appreciation for the manga. With that being said, the anime is not 100% faithful to the manga, but it still captures the atmosphere and tone of original text quite masterfully, and those qualities are especially important when it comes to the narrative of Trigun. 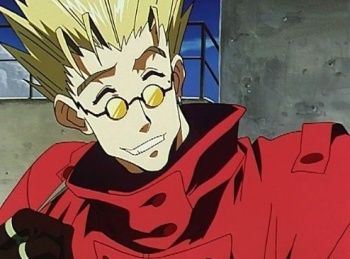 The series chronicles a series of adventures in the life of Vash the Stampede, known as “The Humanoid Typhoon,” and later known as the first human to be labeled a natural disaster. The first episode spends a little time building up this myth, as bounty hunters all over the planet of Gunsmoke are teaming up in order to catch the Humanoid Typhoon, who currently has a $$60,000,000,000 (Yes, that’s double dollars) bounty on his head. It’s not long before we learn that this “Natural Disaster,” is really just a carefree individual with a heart of gold that can’t help but get involved when he sees an opportunity to care for others. This leads to countless duels with some of the toughest, meanest outlaws and bounty hunters Gunsmoke has to offer.

The first ten or so episodes are fairly self-contained stories that don’t really build anything up but Vash’s relationship with two insurance agents, Milly Thompson and Meryl Stryfe. After that, Vash’s background starts to flesh itself out, revealing that there is more to the Humanoid Typhoon than meets the eye (or the wanted posters). I don’t want to spoil too much, but Vash does have a plethora of secrets that are slowly revealed as he takes on the Gung-ho Guns, a series of deadly criminals all after Vash’s head.

In addition to Milly and Meryl, Vash also allies himself with Nicholas D. Wolfwood, a clergyman that bears more than just a spiritual cross, but a large, metal one full of guns as well. Wolfwood serves as an excellent foil to Vash throughout the show, as Vash seeks to save lives through saving as many as possible, but Wolfwood does so by killing those that would seek to take others’ lives. This give and take between the characters often strains their relationship, but also helps give Vash’s personal struggle to save every life even more challenge. In the end, the most intriguing aspect of the show is Vash’s constant dilemma with his desire to save people lives and how those people may, in turn, use their lives to hurt him or those he cares about. Vash may be powerful, but he’s not immortal, nor is he immune to pain, meaning that, before the end of each episode, the gun barrels may be pointed at his head, or the heads of others.

Visually, the show is not groundbreaking, but it does do a good job of capturing the Wild West vibe the creators were going for with the planet Gunsmoke. Expect a lot of landscape pans, as the show loves to show off its blue skies and barren deserts. The action is ever-present, but often takes the form stand-offs with too many action poses to count and a lot of slow motion. This means that, as far as animation goes, don’t expect much, as most shots are static, or using movement in such a way that doesn’t use a lot of frames. Once again, this is just a product of the times and the medium, creating thousands of unique frames would have been a waste for most animated television series. Needless to say, despite the lack of dynamic movement and fluid action, the show does have very exciting staring contests and epic scenery. In addition, the longer takes slow down the overall production, allowing the audience to take a breath and think deeply about every little thing. When the faster, more fluid action scenes do come into play, they are always a treat, but unfortunately never last long enough.

Speaking of lasting long enough, having Johnny Yong Bosch as the voice for Vash is something I can never get enough of. Seeing as Vash is a goofy, carefree guy most of the time, Bosch’s young voice was a perfect fit. When Vash does need to get serious, though, Bosh still delivers, and his performance is only second to the actual story in Trigun. Although there are few other voice actors that stand out, Jeff Nimoy’s performance as Wolfwood was especially engaging during some of the more emotional scenes, although if you come into Trigun expecting top tier performances outside of Vash, you’ll be somewhat disappointed.

The music suffers from the same fate as its voice acting, while the opening is quite impressive, rarely does the music stand out. In most scenes, the music simply blends in with whatever emotional impact the scene is making, so, while not making a lasting impression on me, it certainly did its job, and that’s something that I can appreciate.

Trigun is very often overshadowed by its close cousin Cowboy Bebop, which is sad, because it truly is a delight to watch. Despite having only decent voice acting (with a few exceptions), average music, and relatively static visuals, Trigun is an absolute blast that had me laughing and thinking the whole way. While it’s not perfect, it is fun and it does ask the questions that will make viewers ponder for years to come without ever offering them an answer. Trigun is one that went straight from my backlog to my heart and is truly greater than the sum of its parts.